Monday was a sharp, sudden drop of 23 handles with Nasdaq & Russell hit harder. But before you could say 2014 is different, Tuesday became just like 2013 again with SPX rallying almost 20 handles, NDX rallying almost 2% and Treasuries-Gold falling. Did the comforting retail sales number lift the gloom? David Rosenberg seemed to suggest so in his tweet in his Tuesday morning tweet:

Which stores reported these strong sales, we wonder? Because just about every retailer reported bad numbers & several got their heady prices cut off this week.

Wednesday featured another 100 point rally in the Dow (almost 10 handles in S&P) with Nasdaq & Russell closing at new all time highs. Thursday & Friday saw declines from the highs with the S&P down for the week and the Dow barely up. The feeling was well described in the tweet on Friday afternoon:

Henry McVey of KKR summed up the consensus bullish view in his conversation on BTV Market Makers on Monday:

The other extreme was articulated by Lakshman Achuthan of ECRI who still tells us that the U.S. economy went into a recession between Q4 2012 & Q1 2013. What does he say about 2014?

Larry Fink seems concerned as well, especially about the advanced economies of Europe. His main concern, his “black swan” or major global crisis case stems from the fact that the world has & will continue to have too many people without jobs.

The same concept was succinctly expressed as a “Long Robots, Short Human Beings” investment theme by Michael Hartnett of BAC-Merrill this week. His chart tells the US part of the story simply and eloquently:

We hear that Janet Yellen is primarily a labor economist. So the concern expressed by Larry Fink must be central to her as well. Will she address this issue in the January FOMC meeting or in the March FOMC meeting? And what will she say?

Those who believe in mean reversion of surprises in data might want to look at the tweet below by Brian Kelly of CNBC Fast Money: 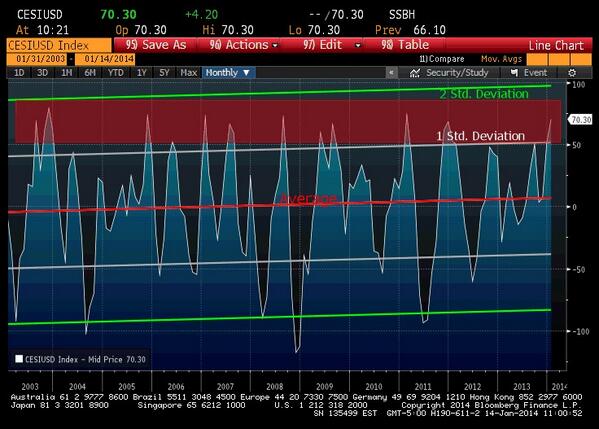 Doesn’t this week’s action in US interest rates seem more consistent with a slight mean reversion of economic data?

The Treasury yield curve had a small bull flattening this week with the 30-yr & 10-yr yields falling by 5 bps & 4 bps while the 3-year & 2-year yields rose by 2 bps & 1 bp. Yields have dropped in the past two weeks across the curve with the 10-5 yr spread dropping by 13bps. The 30-year Treasury bond is up almost 5% in price in the past 2.5 weeks. Who would have thunk it before New Year’s eve?

The action led Rick Santelli to utter the “double-top” word on Thursday morning:

Henry Mcvey of KKR is at the other extreme as he told BTV Market Makers on Monday, January 13

Lawrence McMillan in his Friday summary:

Gold & Gold Miners acted great this week. The Gold miner ETFs, GDX & GDXJ, were up 5.8% & 11.9% this week. Kudos to Larry McDonald who was steadfastly bullish in December and argued that Gold miners were a great buy after January 1, 2014. He took a victory lap on Friday afternoon in his tweet:

Jon Najarian of CNBC Fast Money also recommended GDXJ 32 calls a couple of weeks ago and those have been a rocket. Kudos to him. Others like Mark Dow, David Bannister, George Davis & George Gero recommended the Gold at least as a short covering trade as our weekly articles documented in December.

We recall that Dennis Gartman was bullish on Gold in Euro terms and considering going long Gold in Dollar terms. That is what Tom McClellan discussed in his Thursday’s article Gold Breaks Downtrend, Sort of:

Abigail Doolittle of Peak Theories was quoted in a WSJ article saying:

The WSJ article used the chart below as support for their view: 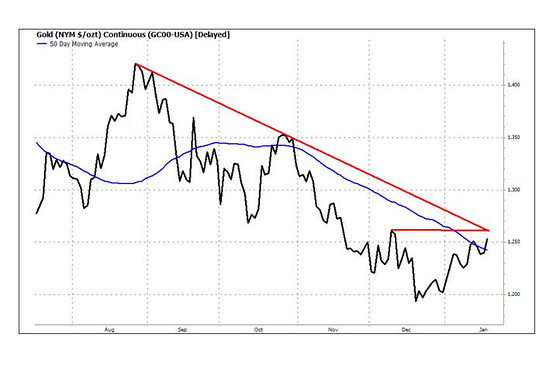 A more detailed case on Monday was made in an Minyanville article titled New Gold Bull Market Cycle Has Started.

The chart in that article tells a pictorial story of the previous 4 cycles. With so much bullishness, we need to feature a bearish call as well.

6. Inflows into Long Only Funds & Hollywood

Michael Hartnett of BAC-Merrill writes that long-only funds saw $6.5 billion inflows this week, the largest in 12 months. He says this is a sign that investors are warming to idea of active funds as opposed to just passive index strategies. Hopefully, he is right. Meanwhile, this week made it 12 straight weeks of EM equity redemptions, the longest outflow streak in 11 years.

There are those who believe that a peak in long-only funds could suggest at least a short term top. They may want to listen to Carter Worth of CNBC Options Action who related a new indicator of market tops, a Hollywood indicator. Pointing to his chart, he said:

Much of America is on a mission to get more young women into STEM fields. NBC, as we recall, launched a series an year or so ago to focus on education of women. We have always wondered whether such initiatives are a lost cause. Because look around you – so many high paying fields are available to women. And these fields, like television for one, pay a great deal more to women than a science career would. Smart women know that. But most of them stay quiet. Not the fearless Amanda Drury of CNBC. As we recall, Ms. Drury made a flat “education is so over rated” declaration at the end of this week’s CNBC segment about states with most millionaires.

This was not her first moment of candor, as we recall. In an earlier CNBC special about a young woman winner of the spelling bee contest, Ms. Drury, as we recall, ended that segment with a contemptuous I would go the beach, not to a library type declaration.