These, we were told all week, were the reasons for the negative and somewhat scared action in the US equity market this week. And China, among these three, was by far the most important issue for global markets. But no one can tell where the 2013 Chinese growth rate will end up by year-end. So the short term attention has been focused on the fast & ugly sell off in copper as a symptom of the Chinese slowdown.

Frankly, Ukraine could end up creating serious long term damage if US & Russia let their verbal assaults get out of hand. We concur with Colonel David Hunt who bluntly told Bill O’Reilly that “we don’t have a dog in this fight”. Remember Fox is the most hawkish network in America, Bill O’Reilly is as hawkish as they come within Fox and David Hunt has been among the most hawkish of Fox guests since the invasion of Iraq in 2003. When a knowledgeable uber-hawk refuses to get hawkish, we take note.

In our opinion, Crimea is a done deal and it is simply not worth resuming a long term cold war between West & Russia. At this stage, we are more disturbed by the attitude of Chancellor Merkel than Secretary Kerry. US & EU should impose an appropriate level of sanctions that hurt some but don’t cause serious damage. Russia will protest and do little more. But if President Obama & Secretary Kerry impose highly damaging sanctions, President Putin will retaliate. At that point, what more could he lose by moving militarily into Eastern Ukraine and even into Kiev? Foreign Minister Lavrov has already invoked Kosovo as a precedent.

Russia needs a high oil price to keep its economy solvent and would need a much higher price of oil if western sanctions really hit hard. What could Putin do to move oil prices up to a higher base? What is the soft spot for America, a spot which can cause serious problems and an oil spike? Our immediate answer, though highly improbable at this time, is Bahrain. This is so symmetric to Crimea – a majority Shiite population that doesn’t want to be ruled by a Sunni minority; a tyrant-like Sunni “royal family” that has oppressed the majority far worse than Yanukovych did in Ukraine and home of the US Fifth Fleet that guards the Persian gulf. This would be our choice of a likely spot to create a spike in oil prices and cause maximum damage to US position in the Persian gulf. Of course, this way out scenario assumes a resumption of the cold war. The reality is that the West cannot destroy Russia and you don’t merely wound a bear and hope to walk away.

We assume, for this article, that both US-EU & Russia stay within theatrical actions and accept the Crimean fait accompli for greater aid to Ukraine from US & EU. That brings us back to Copper.

Copper is down about 12% in 2014 while Gold is up about 15%. What does this huge divergence between copper & gold mean? GaveKal Capital pointed out on Monday that the “Last Two Equity Corrections Started With A Plunge In The Copper To Gold Ratio“:

What does one have to do with the other? GaveKal says that the “copper to gold ratio has served as a tripwire for a deflationary shock”. No wonder treasury yields are falling with a fall in copper-gold ratio. GaveKal also argues that the action in metals & stocks are due to Fed’s taper template just as the 2010 & 2011 corrections were “precipitated by temporary lulls” in Fed’s QEs.

But is copper poised to rally after suffering a major breakdown? Not just yet is the verdict of Tom McClellan:

But as we all know, charts & markets are powerless against the dominant force in markets, the US Federal Reserve. So what copper, gold & stocks do could well depend on what Fed Chair Janet Yellen does and says on Wednesday, March 19, merely two days before March options expiration. Virtually everyone expects her to taper by another $10 billion on Wednesday. But what if she alludes to Ukraine-Russia, weather & lukewarm job numbers and either does not taper or hints at reduced taper in subsequent FOMC meetings? Worth a thought & perhaps a risk-on hedge?

Louise Yamada voiced the trending call on China in her discussion with CNBC’s Brian Sullivan. Her case is easily understood from her chart below from CNBC.com:

Ms. Yamada said that US & Chinese stock markets have gone in completely different directions and it is hard to make a call on what China’s decline would have on US stock market.

The opposite call was voiced by Komal Sri Kumar to Maria Bartiromo of Fox Business (man, that sounds weird):

Unlike Yamada, Larry McDonald was clear on how Chinese turmoil would affect US stocks. His simple view is that weakness in the credit market in the 2nd largest economy in the world has to impact US stocks. For reasons only known to CNBC webmasters, this discussion of Larry McDonald & Rick Santelli’s statement that bond markets are more right about the economy than stock market were deleted from the videoclip on CNBC.com.

Paul Richards of UBS said on CNBC FM -1/2 that whether China meets their 7.5% growth goal is of great importance to the global economy but added that Chinese leaders will meet that target.

Marc Faber was even more confident that they would not as he told CNBC Asia Squawk Box this week:

But Komal Sri Kumar is not deterred. As he told FBN’s Maria Bartiromo on Wednesday:

Jeffrey Rosenberg of BlackRock went the other way on BTV Surveillance on Monday:

The belly of the curve has done well this year too with the 5-year yield falling by 21bps in 2014.  But Rick Rieder of BlackRock is not impressed as he told CNBC PowerLunch on Monday:

Elliott Wave-Forecast.com signaled a bullish view on Treasuries on Thursday:

The “guru” views we summarize below range from bearish to bullish. So which way do we begin? We take note when a “guru” changes his or her stripes.

Whenever we have heard or read Jeff Cooper, he has been bullish. This week, he seemingly turned bearish in his Minyanville.com article on Wednesday titled Did Yesterday Mark a Market Top?  Normally, we do not refer to articles that require a subscription but this change of spots did surprise us. So we will include just a couple of excerpts sans the detailed discussion or charts:

CNBC FM -1/2 brought out an experienced but quiet voice in Lawrence Altman, a trader who,as he told us, puts his own money on the line by trading trades 5,000 – 50,000 contracts every day & goes home flat every day.

Jeff Saut in his email on Tuesday, March 11:

Art Cashin added the following to this observation by Jason Goepfert of SentimenTrader.com:

What should individuals do? Faber says cash, T-bills cash, is the best place for next 12-24 months.

Lawrence McMillan in his Friday summary:

Actually, non-Japan Asia did trade much better than US or Europe this week. A rotation from Ukraine-driven Europe risk, perhaps?

Cooperman is reputed to be a superb stock picker and below are his stock picks for CNBC FM -1/2 viewers:

Now why on earth would the webmasters on CNBC.com delete this final word from the videoclip on CNBC.com? Anchor Wapner kept this as the final word on his segment for maximum impact and CNBC.com deleted it. Why? Our only guess is that CNBC.com is under orders to keep their clips short for greater impact. So they delete calls of maximum impact just to obey orders? Guess CNBC works in mysterious ways too!

Suttmeier’s “don’t see any major divergences in the market” produced derision in the tweetosphere. He will be right if as S&P goes to new highs after this down move.

Dennis Gartman on Oil on CNBC FM on Monday, March 10

We remind readers what Larry McDonald said in the first week of December 2013:

So what is he saying now? Read his Friday afternoon tweet:

Tom Fitzpatrick of Citi said on BTV Surveillance (see above) that the outperformance of commodities sans industrial metals might be a first sign of cost-plus inflation ahead. BTV’s Tom Keene promptly pointed out that David Rosenberg made a higher inflation ahead call last year and took flack for it. This Wednesday,  GaveKal also came out with a piece titled The End of Commodities’ Relative Underperformance? The chart below is from that GaveKal article: 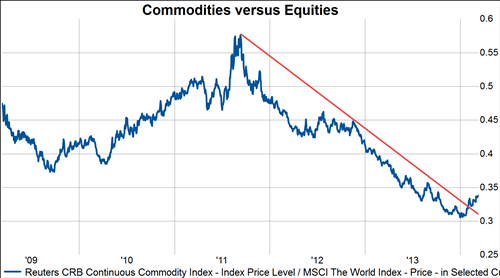 Carter Worth of Oppenheimer & CNBC Options Action made the commodities outperform stocks in 2014 call back on December 31, 2014:

This is an interesting case of the forecast coming true despite the main case for the forecast proving very wrong. Carter Worth’s call was seemingly based, to a large extent, on copper having made a bottom in December 2014.

Inflation Accelerating is the call of Keith McCullough of HedgEye who published a free article titled Double Bubble Trouble on Thursday:

His asset allocation model, he writes, is “basically the opposite of what it was on this day in February of 2013”: