Editor’s Note:  In this series of articles, we include important or interesting articles, tweets, videoclips with our comments. This is an article that expresses our personal opinions about comments made on Television, Tweeter, and in Print. It is NOT intended to provide any investment advice of any type whatsoever.  No one should base any investing decisions or conclusions based on anything written in or inferred from this article. Macro Viewpoints & its affiliates expressly disclaim all liability in respect to actions taken based on any or all of the information in this article. Investing is a serious matter and all investment decisions should only be taken after a detailed discussion with your investment advisor and should be subject to your objectives, suitability requirements and risk tolerance.

Wasn’t “Rinse & Repeat” an adage of sorts? Well, 2014 has been a case of repeat without rinsing. The themes repeat almost every week – yield curve flattens, treasury yields move lower, stocks chop around and economy still waits for the growth “Godot”.

This week, the 30-5 yr yield curve flattened to 172 bps from 179 bps last week and from 223 bps on December 31, 2013. The entire Treasury curve fell a little this week but the bulk of the move down came on Thursday & Friday after Ukraine scared some on Thursday morning. And what about stocks?

The title of this series of articles, “Interesting Videoclips”, is rapidly turning into a misnomer. We simply cannot find FinTV clips that are worth discussing. We scan BTV, CNBC and FBN regularly to find clips that can teach us something, provide interesting insight into markets or add value in any real manner. The networks don’t have any.

Take CNBC – apart from Santelli’s clips, Cramer’s initial thoughts at 9 am and the two Fast Money shows, the rest of CNBC has almost become a waste of time. Ditto for BTV & FBN. Not all their fault though. The repeat without rinsing and the technical nature of the stock market has made most of their guests useless except for some occasional insights.

In contrast, the Tweetosphere has become much more interesting and useful. We get a lot of value from sharp tweets & interesting charts from many tweeters who tend to be traders or ex-traders. So those are what we include more and more. We don’t know the majority of people whose tweets we include and we remind readers that they should exercise their diligent & defensive judgement in reading such tweets & the charts referred to in the tweets. Caveat Reader is the loud message we want readers to get.

Elliot Wave International seems to disagree vehemently with the above “it’s too early to be too worried” message. The video & the chart below from their article Phase II of Housing’s Deep Slide paints a terribly different picture:

Fortunately others are more sanguine at least about other sectors of the U.S. economy:

Jim Paulsen had the most optimistic comment about the economy on Monday, April 21:

The 30-year yield fell by 7 bps (10-year yld by 5 bps) this week with a 4-day consecutive drop from Tuesday to Friday leading to:

How great has been the U.S. High yield rally?

What about the divergence between the bond market & the stock market?

The Parets article is a good read and centered around his chart below. His bottom line: The most short term bullish call came from Jim Paulsen:

If Paulsen is at 2,000 Jeff Kilburg of CNBC Futures Now is at:

The difference is that Kilburg is a trader and Paulsen is an investor of other people’s money. So Paulsen is “long term” without stops & Kilburg could turn around next week.

Was the sell-off on Friday due to Ukraine or due to margin calls? Rick Santelli pooh-poohed the Ukraine impact as marginal and Steve Grasso of CNBC FM argued that it was mainly margin.

The first should surprise no one:

The article and video in their article What Happens When Borrowed Money Buys $178 Billion in Stocks?
elaborate on the point made succinctly in their chart below: The second comes from Jeff Copper & Minyanville via Are Margin Debt Levels Pointing to a Peak in the S&P 500? He writes:

Cooper also looks at margin debt as a % of GDP and shows an interesting comparison:

So is Cooper definitely bearish? No because,

Well, the Sherpas of Nepal went on strike this week. And Cooper’s Sherpa speaks next week in the FOMC statement. This Sherpa is slowly going on strike by tapering by $10B at every meeting. But that shouldn’t worry anyone because tapering is not tightening, right? The big difference between the two Sherpas is that several Nepali Sherpas died this past week on Everest while the Fed Sherpas are killing American incomes.

The first again from:

The chart below is from their article: When else  did we see this before?

Does a low in bear-count suggest complacency? 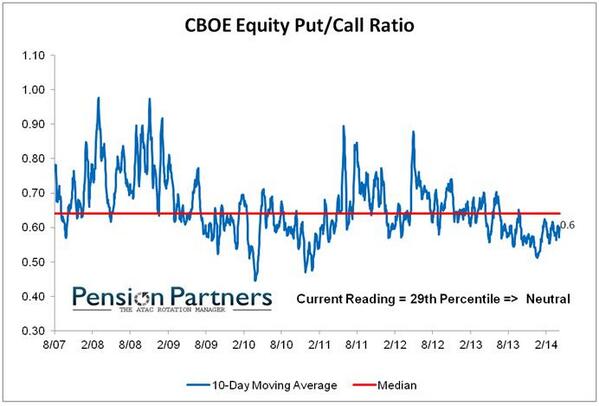 Redler explains in his chart (best viewed in original): 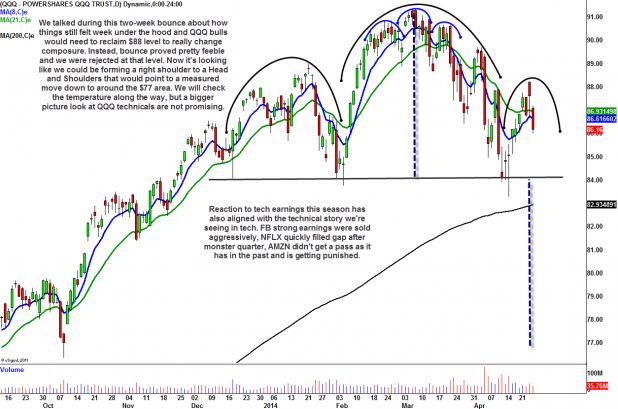 again, his chart tells the story:

But what about seasonality of April-May?

Richard Bernstein argues that U.S. small caps are in a secular bull market. The market has not concurred for a few weeks and neither do the following:

If we recall correctly, Jeff Chmielewski tweeted a timely tweet about buying $IWM puts this week. On Friday he tweeted:

Earlier in the week, we saw a few tweets & charts arguing about a rally to new highs. Clearly they were proven wrong by the end of the week. Similarly many of the above tweets could be proven wrong next week perhaps due to the wickedness of markets, economic data and/or the Fed. So Caveat Reader is our message in the strongest possible manner.

Biotechs have been a hot sector this year at least until very recently. How hot? Intensely so according to the following tweet & chart: 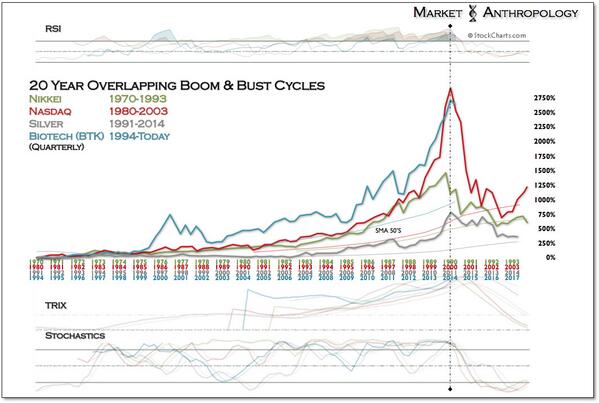 But what about Hot IPOs as a sector? 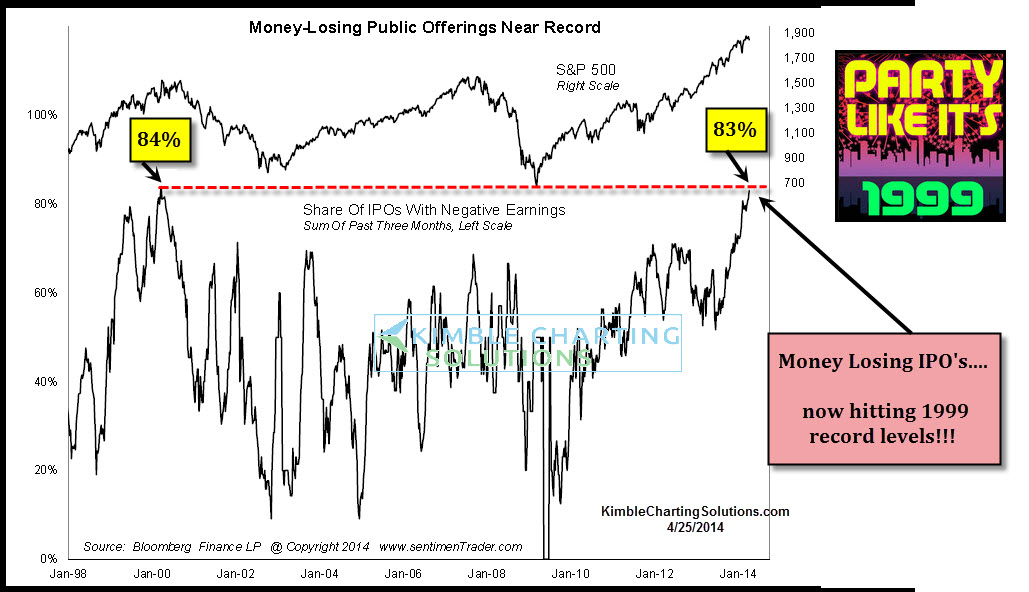 Haven’t you heard the old saying about many many charts lying at the bottom of the ocean? Well, we might see that next week with many of the charts above if the alternating up-down weeks pattern described by Ryan Detrick above holds next week.

After all, Chair Yellen could surprise positively, the payroll number could come in at 250K or higher and/or Putin might throw in the towel and go take a vacation at the Black Sea ports he just acquired. A strong rally would essentially make many of the above charts invalid and so, once again, Caveat Reader.

Like the actions of some people precious to us, we can’t make any sense of the action in precious metals. Apparently, we are not the only ones:

And predictably the opposite view:

7. Rotation all over again?

According to this week’s report from Michael Hartnett,

And the breakdown of equity inflows?

His chart 1 is expressive:

But Carter Worth of Stern Agee & CNBC Options Action was unimpressed. He called the rotation from growth to value as “epic” but added that when value succumbs (his tone implied it would) then growth would not recover & then the S&P will go lower as an index. Of course, the webmasters at CNBC.com deleted this comment from their videoclips. So the above is our recollection subject to the vagaries of our memory.

The inflows into EM fit with the rare bullish call that we saw from Elliott Wave International in their article Emerging Markets To Begin a New Uptrend? The chart & the excerpts below are from this article:

“The past few issues of our monthly Asian-Pacific Financial Forecast have detailed important evidence supporting a low in emerging markets:

This seems to be a directional call and not a relative EM-S&P outperformance call. Historically, EM markets have needed S&P to behave itself and Elliot Wave is screamingly negative on the U.S. stock market (see 5.1 & 5.2 above).

Another way of saying Caveat Reader is a la Sgt. Esterhaus of Hill Street Blues “Let’s Be Careful Out There next week” (exit line introduced years ago in his daily by Dennis Gartman).