Editor’s Note:  In this series of articles, we include important or interesting tweets, articles, videoclips with our comments. This is an article that expresses our personal opinions about comments made on Television, Tweeter, and in Print. It is NOT intended to provide any investment advice of any type whatsoever.  No one should base any investing decisions or conclusions based on anything written in or inferred from this article. Macro Viewpoints & its affiliates expressly disclaim all liability in respect to actions taken based on any or all of the information in this article. Investing is a serious matter and all investment decisions should only be taken after a detailed discussion with your investment advisor and should be subject to your objectives, suitability requirements and risk tolerance

Last week, we wrote how the word “Videoclips” in the title of these articles was rapidly becoming a misnomer. This Friday convinced us that Tweeter had finally replaced Fin-TV as the most valuable tool for the investor. That is why we are now retiring the old outmoded term “Videoclips” in favor of the new modern “TACs”. The short acronym stands for Tweets, Articles & Clips.

In the old days, Fin TV was responsible for alerting viewers when something unusual happened in the markets. After all, they were the ones with reporters who knew the players. Not this Friday. This Friday morning, Fin TV anchors were asleep at the wheel while the Twitter-sphere began chattering. Even when alerted by us & others, Fin TV anchors paid no heed. This was real proof that they have become secondary players in news dissemination & opinion distribution.

So we decided to give the pride of place to Tweeter-sphere in our title.

2. The Huge Reversal on Friday morning

The Non Farm Payroll number of 288K stunned virtually everyone. We certainly expected a spike in Treasury yields & vertical fall in Treasury prices. But the worst the TLT did was to fall by 1 point (10-yr yields rose by 9 bps to 2.70%) in the immediate aftermath and SPY rallied by about 3/4 of a point. Then the yields started falling a bit and SPY gave up some of the up move. This choppy action continued until about 10:10-20 am:

Then watch what happened in the charts below:.

All four moves were sudden, steep, and on spikes in volume.  No one had a clue why they happened. Our guess was either Putin or some large fund was in trouble. Rick Santelli had already pooh-poohed Ukraine effect. But Art Cashin said Ukraine and at the end of the day Steve Grasso & Tim Seymour of CNBC FM also said Ukraine arguing that no one wanted to go short this weekend with Ukraine ahead.

We are nowhere as smart or savvy as these pros but the action smacked of liquidation of positions to us just like the strongly bullish flattening action in bonds on Thursday afternoon. That action was so weird ahead of a consensus strong number, so weird that David Rosenberg tweeted on Thursday afternoon:

Well, David Rosenberg was wrong for once because the consensus was correct. A better comment about Thursday’s flattening came from (via retweet by @kathylienfx):

If Thursday was liquidation, then Friday’s spike was absolutely liquidation and a bigger one. The 10-year yield fell by 2 bps on the day after being up 9 bps after the payroll report with a peak-trough move from 2.70% to 2.57%. And the 30-5 yr spread closed at 170 bps.

Jim Bianco essentially argued for short covering in his conversation with Rick Santelli on Friday morning:

As if on challenge, Tim Seymour of CNBC FM said on the Friday 5 pm show that he had bought the TBT. But have the shorts been wrung out? If not, where are their stops? Art Cashin said that he would be worried if the 10-year yield fell through 2.50%.

But Bill Gross now thinks the 10-year yield is at a fair level:

was the call made by Rick Santelli on Friday morning. In football, a foul is called on the player who is offsides. In Fedland, the investors take the penalty when the FOMC chairman is offsides. After all, the most flagrant offsides call of our times has to be on Ben Bernanke for his comments on Wednesday May 22, 2013. The Q1 2014 GDP print of 0.1% should be enough by itself to show how unnecessary that was.

Another key evidence was pointed out on Thursday afternoon:

He is absolutely correct. On Tuesday May 21, TBT closed at $64.41. It went into its own bull market to close 2013 at $79.26. On Friday TBT closed at $62.38 – more than 100% reversal of what Bernanke’s hawkish prod to markets. At Gayed’s suggestion, we calculated the movement of TLT by including dividends & found that today’s effective price of TLT is $116.09 just about 1% below the May 21, 2013 close of $117.79. A complete reversal of the entire move that was caused unilaterally by Bernanke pretending he knew how to speak to the markets. See section 5 below for Helene Meisler’s equity market evidence of the reversal of Bernanke’s taper tantrum.

We also looked up our own favorite indicator, the one that Rick Santelli taught us back in the pre-QE4Ever days. In those days, the 30-10 yield had big resistance at 100 bps and whenever the spread rose above 100 bps, buying the 30-year bond made money. In fact, Rick Santelli had said on CNBC (as we recall), there were only 3 times he had seen that spread exceed 100 bps in his career. Well, the QE4Ever converted the 100 bps level into support from resistance.

After spending months above the 100 bps level, the 30-10 year yield spread once again fell through the 100 bps support on Thursday, December 19, 2013. It has never looked back. On Friday it closed at 78 bps. Did something happen on Wednesday, December 18, 2013? The Fed did its first taper of $10 billion on that day.

But what about the other bound? Our empirical observation is that a major bond rally ends when the 30-10 year yield spread touches 50 bps. So Friday’s close of 78 bps is right smack in the middle of the 100 bps resistance and 50 bps support in a non-QE environment.

A “big point” was made by Rick Rieder on BTV Market Makers on Friday:

But have we come too far too fast in long Treasuries?

While European credit is still flying high with yields in Spain falling through 3%, U.S. credit is showing signs of strain. J.C. Parets has been warning of high yield bonds falling relative to Treasuries for some time. On Friday he used the “breaking down” term for high yield credit. 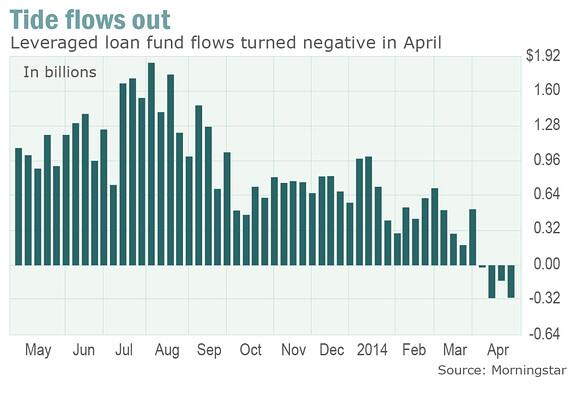 Not all leveraged U.S. credit is weakening. Muni Closed End Funds are still acting very well. See ytd charts below of 3 NY Muni CLOs –  MHN (BlackRock), NNP (Nuveen) & PNF (Pimco). All three distribute dividends at 6% after all taxes and the the first two trade at 5.6% & 8.2% discounts to NAV.

Is this choppy action leading to a correction in the stock market or is it still a rotation? A correction does not end until everything goes down and the S&P still refuses to do so. In fact, the S&P action looks bullish to Lawrence McMillan who wrote on Friday:

The rotation case was made on Friday by:

and graphically on Thursday by:

A similar case of S&P mega-caps outperforming S&P was made on Thursday with the ratio of equal weighted S&P to standard of cap-weighted S&P: 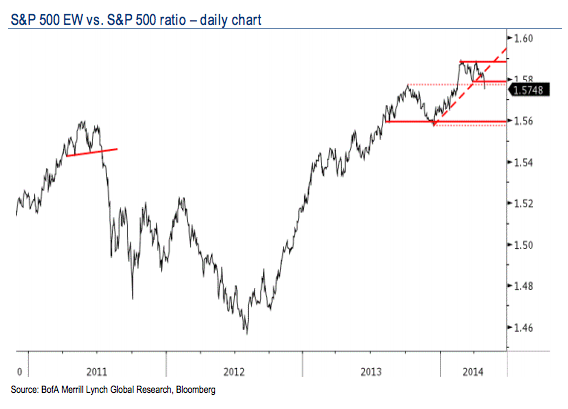 The rotation case was also made on Wednesday in:

The absolute determinant is whether deeply oversold stuff bounces. Remember deep oversold conditions did not lead to a bounce in 2008 and high yield credit kept selling off against Treasuries in 2008. So are we in an 2008-like environment? Tom McClellan asks and tries to answer in his article Discretionary vs. Staples. This article looks at performance of XLY vs. XLP as a ratio:

The ratio of HYG to TLT discussed by J.C. Parets in section 4 above is sort an equivalent of this XLY to XLP ratio because high yield bonds and discretionary stocks tend to need a growing economy to outperform. Looking at credit, J.C. Parets seems negative while Tom McClellan seems positive as he looks at equities.

The correction side was hinted at in: 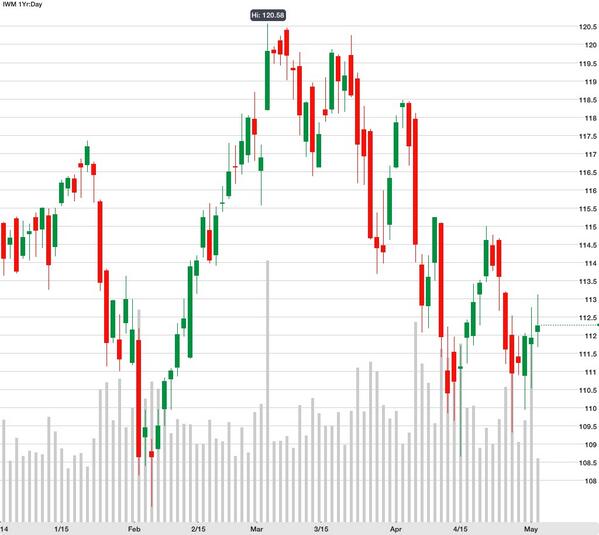 A pictorial case was made on Friday afternoon in: 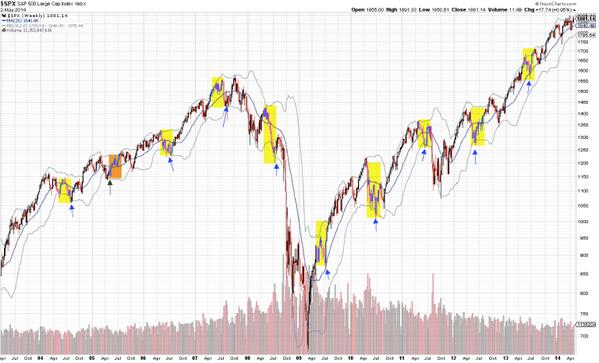 The really weird action on Friday was in basic materials with Freeport McMoran (FCX) up 1.5% and CLF up 3.5% accompanied by Brazil up 3.5%. The difference is that FCX & CLF rallied right from the open unlike Gold that spiked around 10:30 am. This action was impressive:

The spike in Gold led to a difference in opinion:

A technical view came in: 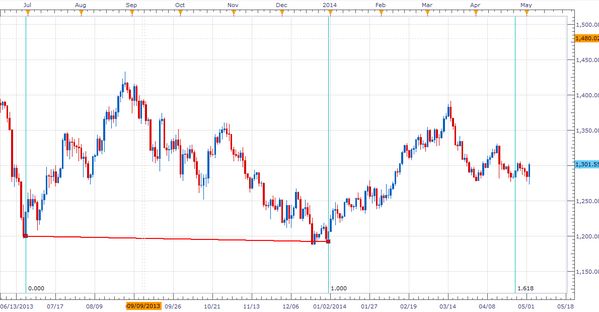