1. “what was good for last several weeks is not good right now”

said Rick Santelli on Friday morning. And he was absolutely right. He was speaking about this week’s reversal in trades that have worked until now.  Last Friday morning saw a spike in Treasuries and Gold. This week, there was a reverse spike.

Did that change or at least pause as the tweet below suggested on Wednesday late morning? 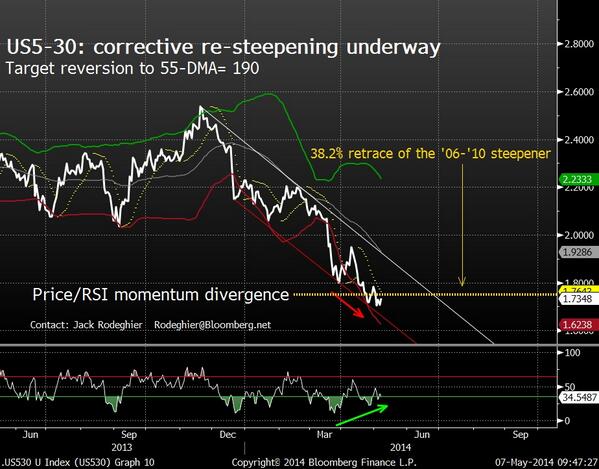 Our friends on CNBC Power Lunch didn’t notice the fall because it took place in the bond market. Had it been an equivalent vertical fall of 146 points in the Dow, they would have devoted the entire show to it. The 30-year auction was atrociously weak and a fall in the 30-year bond was rational. But not this kind of a fall. Yes, most of the curve steepeners were liquidated last week (perhaps creating last Friday’s spike in long Treasuries) and that position squaring might have made the 30-year bond technically vulnerable. (We focus on the 30-year because it was the only on-the-run Treasury to close down on Thursday.)

But still, the vertical nature & the volume spike do suggest a change in the macro sentiment. Remember the 30-year T-bond is vulnerable to increased or additional QE and that the up move in 30-year yields really began with Draghi’s promise to whatever needed in August 2012.

And what happened on Thursday morning? Draghi became dovish and the Euro-USD fell. The markets took it seriously and the bounce in the U.S. Dollar vs. Euro demonstrates it. This change in macro sentiment and the surprise of weak demand in the 30-year auction led to the vertical fall, we think.

Look where the 30-10 year spread closed on Thursday:

This spread steepened a bit more on Friday but not enough to break the support above, we argue. Chair Yellen has been trying valiantly without success to steepen the 30-5 yr curve ever since her comments in March. And Draghi did it with a mere hint on Thursday morning. Shows who’s the boss, right? And why are markets so focused on QE in Euroland? 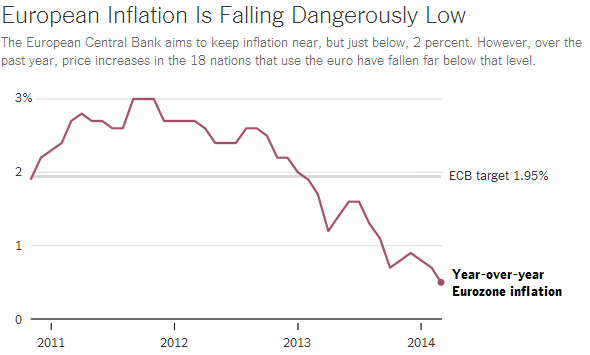 The European stock markets seemed to take Draghi at his hint of QE, according to the tweet below on Friday afternoon. 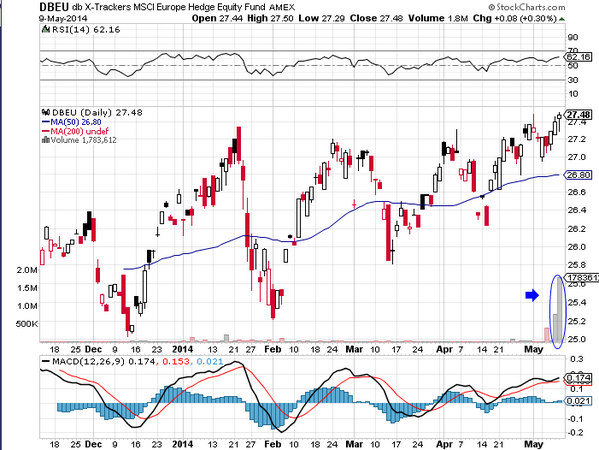 Now if the markets really expect a QE from Draghi, then the Euro has to weaken and the Dollar should strengthen, right? That is what J.C. Parets argued on Friday:

Is the above a major macro change or is it simply be a head fake driven by a correction in the major trends in the Dollar and the Treasury yield curve? We don’t know but Draghi has served notice, we think.

The 30-year yield jumped by 10 bps this week, mainly due to the spike on Thursday and Friday. The 10-year yield went up by about 5 bps while the 5-year & 2-year yields fell by 4 bps. A major steepening indeed. The European sovereign bond markets continue their bull run as in the born-again “yield convergence” type appetites of 1993 with the Spanish 10-year yield breaking below 3% (2.92%). The U.S. Corporate bond market also acts very well. This led to:

Jeff Gundlach took a more nuanced position on Treasuries at these levels in his comments on CNBC FM 1/2 on Monday:

Frankly, the worst sentiment news for the Treasury market is bullishness from confirmed stock bulls like say, Ed Yardeni: 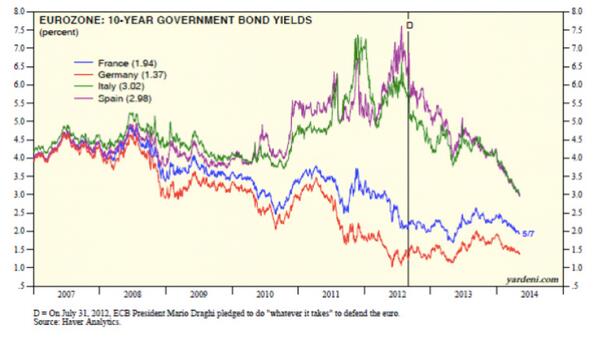 If the Dollar begins a rally, if the yield curve begins to re-steepen perhaps in a corrective/bear mode, what sector of the S&P might face the headwind from these moves? The Consumer sector, we think. And like the short Dollar and Long Treasuries trades, XLP has substantially outperformed the S&P which itself has viciously outperformed the Nasdaq & Russell 2000.

Interestingly enough, Carter Worth of CNBC Options Action argued for a 10% correction in the XLP on Friday after the close. His main point is mean reversion of the “epic period of outperformance” which he explains via persuasive charts in the clip. His supporting argument is that the major components of XLP sport average PE of 21.5 with 0% average earnings growth.

The second divergence is obvious and best explained by below: 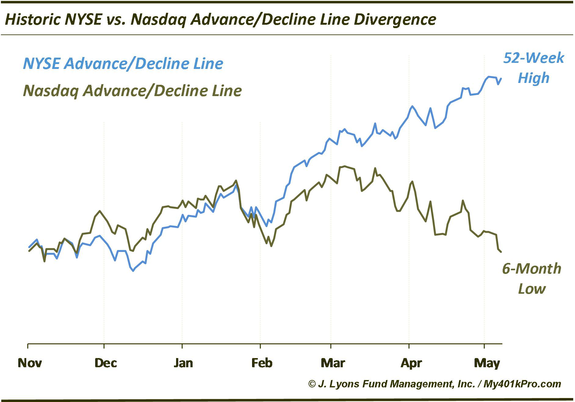 The 3rd and perhaps most important divergence is the tremendous under-performance of the Russell 2000 small cap index. It held an important support level this week but barely:

Tom DeMark spoke with Rick Santelli on Thursday and in his typical fashion stated the proximity of a final top of this rally.

DeMark is well known for his trend exhaustion indicators. Unfortunately for him, this Fed-QE driven market has been like the Energizer bunny. This is one reason why indicators like DeMark’s failed in 2013. Given the steady and determined taper by Chair Yellen and the high probability of the end of QE in 2013, his exhaustion indicators stand a higher chance of being proven correct. And we won’t have to wait long. DeMark, in his usual fashion, says the stock market should top in the next couple of days, meaning next week. At least, that is what we think he said to Rick Santelli  because DeMark’s prediction seems conditional on hitting 16,600 – at least that’s how he put it. 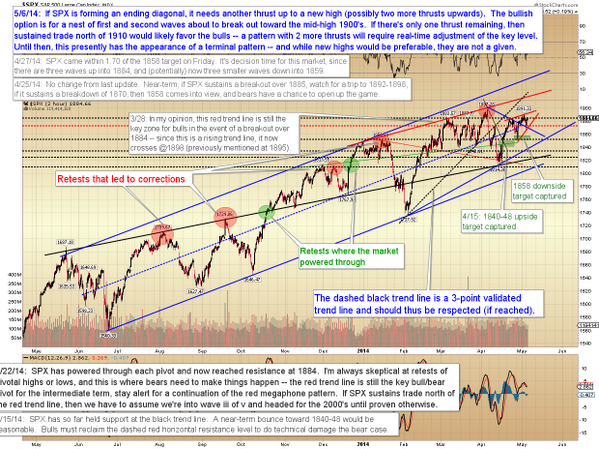 But then we have a more conditional tweet from the same source:

A similar view came from:

Marc Faber is nothing of not decisive and emphatic. He was both on CNBC Squawk Box on Thursday morning:

Remember the key BlackRock statement from their 2014 outlook was that stocks and bonds will be much more correlated in 2014. Marc Faber’s prediction seems to echo that.

Jay Jordan of the Jordan Companies told CNBC Squawk Box that he had sold his stocks a few months ago. He added:

Could we find a bull? The closest was the tweet below: 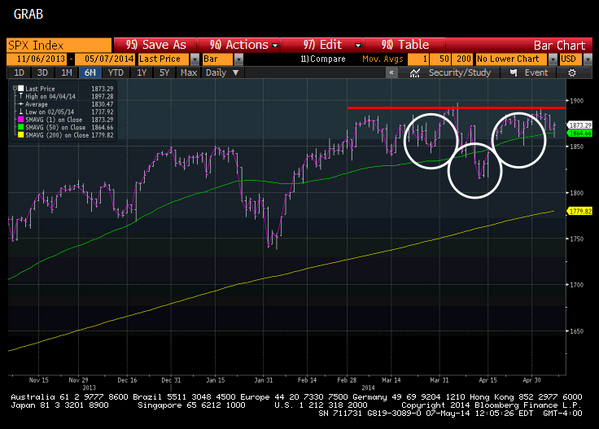 Such detailed interviews are what BTV does best and Erik Schatzker & Stephanie Ruhle are probably the best pair for such interviews. The following is a subset of the excellent transcript provided by BTV PR.

Summary of the clip: