A zealous band of unknown unregarded battle hardened religious warriors burst forth from their lair into a neighboring land and destroyed a large installed army of secular paid soldiers in a whirlwind of tactical mobility. Their deep unrestrained religious zeal and smart dedication to massacre of apostates sent such fear into secular army units that they ran away or surrendered. The land was purified again with the blood & victory of the true believers.

No, we are not talking about this week’s lightening victory of ISIL, the Islamic State of Iraq & Levant (or Syria with ISIS) over a pathetic Iraqi army in the largely Sunni northwest region of Iraq. We are talking about the way the 1990s Afghan Taleban conquered southern Pashtun areas of Afghanistan when they emerged from their lair across the Durand Line. The secular Soviet-trained Afghan army melted away and that land was made “Pak” or purified with the blood & victory of the true believers.

Both bands of religious Sunni warriors were paid & supported in one way or another by the United States of America. Not that US liked these warriors or supported their cause in any way. It is just that supporting them fit in the broader or global US narratives & goals. The story of the US support of the Afghan Taleban via that critical US ally called the “Land of the Spiritually Pure” is well known. How these US-backed warriors and their leader Osama Bin Laden turned into vicious enemies of the US is even better known.

What is not well known is that this stupid saga was repeated by the US in the past couple of years in Syria. Iran had replaced the Soviet Union as the new evil enemy, the enemy that had to be defeated in every theater or region. Since the Assad regime in Syria was backed by Iran, Assad had to go. It didn’t matter that the Assad regime was fighting an even more virulently religious Sunni movement than the Afghani Taleban. Since Al Qaida was deemed to have been decimated, it did not matter that the Arab Sunni Jihadis fighting Assad were essentially Al Qaida affiliates. After all, supporting affiliates of a decimated Al Qaida was an acceptable price to pay to defeat Assad, a client of today’s greatest enemy Iran. And America wasn’t supporting the new Al Qaidas anyway. American allies like Saudi Arabia and Qatar were doing so.

Both the liberal & conservative imperialists were morally & strategically united in the mission to eliminate the Assad regime regardless of the consequences. That Assad was essentially a secular regime that was backed by all other minorities in Syria was deemed immaterial. The left & right wings were both  convinced or convinced themselves that they knew how to pick out secular fighters from among the various groups fighting Assad.

The war against Assad has been extremely brutal and the war against the Afghan regime was just as brutal, especially when Soviets were involved. Such brutal wars against an established regime require enormous passion and zeal. Such inner fire, such intense determination to take casualties only arises from a greater passion, a fiery religious passion in which a fighter’s death is preferable to life under the regime.

This is why the most religiously zealous faction always emerges victorious among the various factions fighting the regime, the faction that commits even greater atrocities than the regime is committing against them. This is why Mullah Omar emerged as the undisputed leader of the Afghani Taleban and this is why Abu Bakr al-Baghdadi has emerged as the winner among the factions fighting Assad.

What an opportunity America had in the past two years? Sunni jihadis from all over the world had converged in the Syrian theater to fight the Assad regime. Think for a moment. Instead of trying to bomb Assad, the Kerry-McCain wings could have persuaded President Obama to bomb & destroy these bands of terrorists assembled in Syria. They could have enlisted the help of Turkey, Iraq & Jordan to cut off all escape routes of these terrorists. An entire generation of Jihadi terrorists could have been eliminated. But Al Qaida was dead & decimated, remember? And Iran was the new global evil. So the Kerry-McCain wings actually wanted to bomb Assad forces rather than the Al Qaidas fighting Assad.

Rinse & Repeat. The Afghanistan disaster has now been reborn in the Levant. Al-Baghdadi is the new & two-in-one reincarnation of the Osama Bin Laden – Mullah Omar pair – a far more intense reincarnation.

1. End of colonial borders & Emergence of a New Sunni State

The boundaries of states in the Middle East are still colonial, drawn principally for the benefit of colonial Britain & France. That boundary between Iraq & Syria has been wiped out in just one week by Abu Bakr al-Baghdadi. What has already emerged is a new Sunni controlled region across ancient Mesopotamia running from the Sunni majority areas east of Aleppo to the north-west of Baghdad. 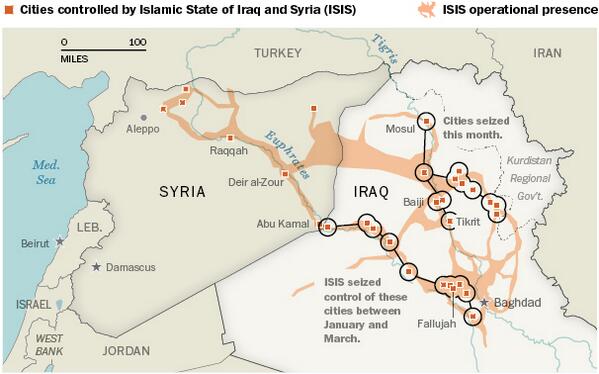 The Humpty-Dumpty that was Shia-controlled Sunni-majority northern Iraq cannot be put together again, not even with all the horses & men of the Obama Administration. There is no way the Sunnis of northwestern Iraq will ever work again with a Shia regime in Baghdad. There is also no way the Sunnis of northeastern Syria will work with any Alawite regime in Damascus. There is now a new Sunni state in much of Mesopotamia. The sooner the Obama Administration accepts it the better it will be for both America and the region.

Today this new Sunni state is under the sway of ISIS led by Abu Bakr al-Baghdadi. And ISIS has ample resources to draw all the Sunni talent they need, military resources taken by looting the US-supplied weapons of the Iraqi Army and financial resources thanks to the $429 million they seized from the Iraqi Central Bank in Mosul. ISIS also seems to have smart strategists and tacticians drawn principally from former Baathists officers of the Iraqi army.

ISIS knows this and so, in our opinion, they will keep up the pressure on Baghdad mainly to keep the Iraqi army tied up in the defense of Baghdad while they consolidate their hold on northwestern Iraq. The Iraqi army will probably be content in fighting for and taking back the boundary areas between Shia-Sunni majority regions. Neither ISIS nor Shia-Iraqis will, at least for now, make any attempt to take the Kurdish majority areas of northeastern Iraq.

So like it or not, the 2006 vision of Vice President (then Senator) Joseph Biden has b
een realized in Iraq – partition of Iraq into Shiite, Sunni & Kurdish regions. The major difference is that these regions will not be administered by a central regime in Baghdad, as envisioned by Mr. Biden. Instead these will become three separate states.

The really big question is what will be the nature of the new Sunni state of “Iraq-Syria” and who will run it? A terror-producing aggressive state run by Abu Bakr al-Baghdadi of ISIS will be absolutely unacceptable to America, Turkey & Iran. But will they act together and in time? It will not be easy. Iran is Shiite and so their abilities in this Sunni “Iraq-Syria” will be limited. And Turkey is non-Arab while the Sunni “Iraq-Syria” is all-Arab.

Iran & Turkey are two historical empires that have dominated Mesopotamia over the past centuries. Against them will be the aggressive Sunni Arab States of Saudi Arabia, Qatar and the softer states of the Gulf. This is exactly how the players were arranged in 1990s Afghanistan – Saudi Arabia & Gulf Sunni states for the Taleban & Iran-Iraq-Syria against the Taleban.

That difference is Iran. Today’s Iran is stronger, more aggressive and better prepared through the proxies built over the past decade. The only reason Assad has survived the military war is because Iranian-trained Hezbollah joined his war against the Sunni insurgents. It was Hezbollah that turned the tide of that war, in our opinion, and stymied the onslaught of Sunni factions.

The crisis in Iraq is of semi-existential importance to Iran. There is no doubt in our mind that Iran will enter the Iraq-ISIS battle in support of the Shia areas. There are reports of Iranian-trained Shia militias already joining the army.  The New York Times quotes an Iraqi commander named Mohammed:

This also demonstrates that the “secular” regime of Iraq is over for all practical purposes. We think the next regime in Shiite Iraq will be a secular-religious combo somewhat modeled on the current Iranian regime.

What if Iran of the mid-1990s had been as strong, determined and focused as today’s Iran? Would that Iran have allowed the mid-1990s Taleban to impose their brand of intense Sunni Islam all over Afghanistan including the Shia regions of Afghanistan near the Iranian border? We doubt it. Will Iran tolerate a new march by the Afghani Taleban to take over after America leaves Afghanistan?

That brings us to late 2014-2016, the period in which America will withdraw all its troops from Afghanistan. No one will seriously question the fact that today’s state of the Iraqi army & regime is due to the sudden withdrawal of American forces from Iraq. It would have been impossible for ISIS to do what it did had 15,000-20,000 US troops remained in Iraq. Remember the Northern HQ of the US forces was in Mosul, the town ISIS captured last week.

The disaster in Iraq will let saner heads prevail in both Washington DC and Kabul, we hope. Sanity will not only require presence of US forces in Afghanistan but also cooperation in Afghanistan between America and Iran. Afghanistan is voting for its new President as we write this piece. The front runner Dr. Abdullah is a smart veteran with a track record of bringing various groups together and he has a good working relationship with Iran.

The entire region from Syria to Afghanistan is crying out for a smart & co-operative relationship between America and Iran. The next 10 years are going to be absolutely critical for the Middle East. America & Iran do not have to be friends but they have to work together where their interests converge. The disaster in Iraq is now driving such common sense according to the New York Times:

The same is true of Russia and Vladimir Putin. He helped America save itself from entering the Syrian war and he can offer real help in Afghanistan. In fact, an America-Iran-Russia working relationship could work out very well in Afghanistan. That doesn’t mean that America cannot oppose Putin in Eastern Europe or that America should tolerate a nuclear Iran. After all, Russia is even more against Iran going nuclear than America is and Iran for its part does not want Russia getting more involved to the north of Iran in Azerbaijan and Armenia.