The deal of the week – freedom of Sgt. Bowe Bergdahl in exchange for the release of 5 hardcore Taleban detainees at Guantanamo – created a rare bipartisan storm in America. That the Obama Administration expected euphoria about Bergdahl’s release seems utterly asinine. This in itself shows how isolated and tone deaf the Obama Advisers have become. This is partly because President Obama does not have to fight another election. Nothing dulls fighting instincts like total absence of war. This may be why the second Presidential terms tend to be more mistake-prone than the first.

Everything about the Obama first term has been described as totally driven by political considerations at the expense of all others. But that team was first rate in strategy, tactics, and single minded focus. They are all gone and their replacements seem like second stringers who just want to run out the clock. We saw the result this week with the appallingly stupid Rose Garden celebration with Sgt. Bergdahl’s father putting his arm on President Obama’s back after praising Allah in Arabic for the release of his son. Would David Axelrod have permitted this spectacle in Obama’s first term? We think not. 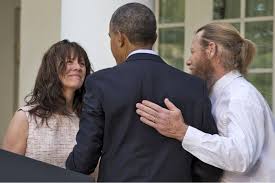 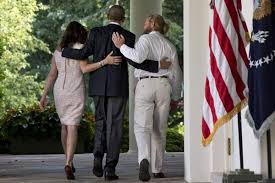 The same Bergdahl deal would have been received better had it been projected as a necessary deal negotiated & implemented by the U.S. Military. The leave no American soldier behind message is best delivered by a commanding officer in uniform. A low profile presentation of the deal delivered by no higher than General Dempsey would have limited the fallout and enabled President Obama to claim the moral credit while staying above the fray. The reason they did not do so is because they expected euphoria in America. Not just Dumb but Dumb as a doorknob.

It seems apparent to us that the timing of this deal was driven by the damage that was being inflicted on President Obama by the VA scandal. Delaying medical care to Veterans to the point of denial was a moral outrage and colossal incompetence. Every American saw it and understood it. The Obama Administration was desperate to switch the topic. They needed to quickly demonstrate President Obama’s dedication to America’s soldiers and his competence. What better way than to get a Presidential deal to free an American soldier from long captivity without compromising commitment to national security? The agreement with Qatar to hold the released Taleban leaders did that. The American soldier came home while the Taleban remained in captivity in an Arab land. Nice in theory but dumb in reality because every one saw through it.

We appreciate transactional hardball and that’s what this deal was, in our opinion. But you don’t play hardball with a hand grenade. Because it can explode in your hands if you mishandle it. And that is what happened to President Obama. The hand grenade exploded in President Obama’s hand and not in the hands of General Dempsey, Secretary Hagel or Secretary Kerry. The Benghazi damage could be deflected to Secretary Clinton, but the Bergdahl-Taleban damage is concentrated on President Obama. Dumb, Dumb as a doorknob.

This deal is a strategic mess as well. First, it elevated the Afghani Taleban to a semi-equal status with America. The same deal could have been structured as a Qatari deal accepted by a reluctant America in the interests of its sacred commitment to America’s soldiers and as a sign of respect for Qatari friendship & alliance. That would have projected a benevolent America respectful of its allies and willing to sacrifice some to extend a hand for peace in Afghanistan. But the imperatives of making President Obama look great were higher than preventing a major diplomatic victory for the Taleban.

The Obama Administration is, for some inexplicable reason, demonstrating to the entire world that the Afghan Government is nothing but a vassal. Witness President Obama’s sudden visit on May 24 to the Bagram air base in Afghanistan. He did not meet with the Afghan President and apparently had not even informed the Afghan President of his visit to Afghanistan. In contrast, even King George of Colonial Britain did not visit his Indian colony without first arranging an invitation from the viceroy in Delhi.

With this Bergdahl-Taleban deal, President Obama told the entire world and, more importantly the people of Afghanistan, that he considers their elected government to be irrelevant when making decisions about the Afghani Taleban and about Afghanistan’s future. And he did it while Afghanistan is the middle of a national election to elect its new President, a President who will have to face the traditional Taleban summer offensive that begins in May-June.

President Obama’s orientation has been described for years by many as predominantly transactional and hardly ever strategic. That description is an excellent fit for the Bergdahl-Taleban deal. Unfortunately, his second term may also come to be described as non-smart if not actually dumb.