1. “he has never disappointed”

We recall the words of Paul Richards of UBS on Wednesday, June 4:

You listened to Richards on June 4, you made money on Thursday, June 5. So what did Richards say about Draghi on Friday on CNBC FM 1/2?

There is no question that Draghi is the man who drives risk assets in the world. It was he who jump started this rally in August 2012 with his verbal promise. And now he has begun doing with a promise to do whatever it takes.

Some produced numbers that were skeptical of how much he could do, like Deutsche Bank:

They may be right but they miss the point, the point that David Tepper made to BTV’s Stephanie Ruhle:

Getting inflation & growth in the Eurozone might be a tall order. But that is in the future. The markets believe in Draghi and that is all that counts until they change their minds.

2. “Sends Yellen back up to the watchtower“.

That’s how Art Cashin described the effect of the much weaker than expected NFP number of 142,000. The consensus had factored in a hawkish statement from Chair Yellen on September 17. Now that is in serious doubt.

A little later came Art Cashin with his “whatever it does, sends Yellen back up to the watchtower” comment. Paul Richards was more emphatic on CNBC FM 1/2:

Just as on August 1, the markets were ready for a strong number and got a weak number. And the initial action was similar on Friday. TLT jumped a full point in the immediate aftermath of the NFP number and the 10-year yield fell below 2.4%. The rally prompted:

But the picture looked different a bit later, especially in the 30-year:

He called it. The rally in Treasuries began fading after the stock market opened and then faded all afternoon. The 30-10 yr curve closed negative in price & up in yield on the day. Peter Tchir took a victory lap in the afternoon:

Compare this to August 1 when the 10-yr closed down 6 bps & the 5-year down 9.6 bps. And this Friday’s number was much weaker vs. expectations than the August 1 number. The key, quite possibly, is the positioning. Interestingly, the day before, Tom McClellan had flagged the peak in open interest in T-bond futures as “the highest quarterly peak since early 2008“. The other key might be the double bottom discussed by Rick Santelli on Thursday. In the clip below, Rick pointed to the 2.34% level hit on August 29 & on August 15. On both occasions, the 10-year yield backed up the next day thus creating a basic double bottom in yields.

The 10-year yield closed just above 2.45% on Friday, a key level according to Rick Santelli with a 3- bps noise interval. So what happens next week might be critical.

The fade in Treasuries could also be due to David Tepper’s call on Thursday:

What we do know is that QE has always led to steepening of the treasury curve and under performance by the 30-year. And that is what happened on post-Draghi Thursday and on Friday, despite a weak jobs number. Goes to show who rules the long end – Draghi & the market’s belief in him.

The weak payroll number revived the “will the real economy stand up” debate about the divergence between the strength in PMI numbers and NFP numbers. An interesting view was offered by Jim Bianco on Friday in his conversation with Rick Santelli:

A nearly identical comment was made by JPM’s Andrew Mowat who called EM indices “Darwinian“. Mowat explained that EM indices routinely throw out the weak sectors and replace them by strong sectors. For example. the resource sector is now only 4% of the Brazil index.

You cannot but give the pole position for equities to David Tepper. No one has been more committed bullish about the impact of QE than him. And characteristically, he said it simply to BTV’s Stephanie Ruhle:

Thomas Fitzgerald of CitiFX was mucho bullish with a 2150-2400 target for the S&P on CNBC FM:

Long term bull Tony Dwyer has been wrong so far in his prediction of a correction. But as Q4 approaches, he is clear on what to do if market suffers a correction:

Could this gift of weakness come from sheer tiredness? Lawrence McMillan writes in his Friday summary:

The market has not paid any heed to charts like the ones below. But this is September and, who knows, it might this time.

Only one was willing to talk about a long term top: 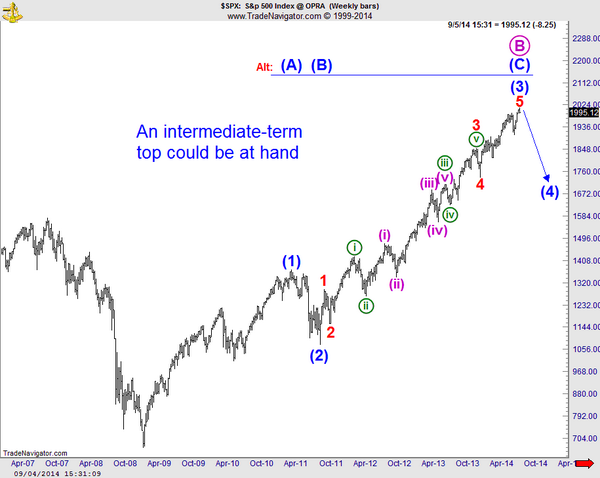 We have always liked to follow what “smart money” is doing. And this week, we saw what OakTree is doing – “preparing for the economy to falter“. What is OakTree doing? Bloomberg reports:

Why raise the money now?

6. What is the origin of the word “algorithm”?

Two weeks ago, we wrote about how Hemchandra, an Indian Mathematician in the 11th century, had discovered what are now called “Fibonacci numbers”. This was at least one century before Fibonacci. As we discovered recently, Fibonacci did not even discover these numbers himself. And that discovery is linked to the word “algorithm”.

The word “algorithm” comes from “algorithmus”: the Latinised name of al Khwarizmi of the 9th century House of Wisdom in Baghdad. He wrote an expository book on Indian arithmetic called Hisab al Hind. Gerbert d’Aurillac (later Pope Sylvester II), the leading European mathematician of the 10th century, imported these arithmetic techniques from the Umayyad Khilafat of Córdoba.

Later, Florentine merchants realised that efficient Indian arithmetic algorithms conferred a competitive advantage in commerce. Fibonacci, who traded across Islamic Africa, translated al Khwarizmi’s work, as did many others, which is why they came to be known as algorithms. Eventually, after 600 years, Indian algorithms displaced the European abacus and were introduced in the Jesuit syllabus as “practical mathematics” circa 1570 by Christoph Clavius.

These algorithms are found in many early Indian texts, such as the Patiganita of Sridhar (870-930 CE) or the Ganita Sara Sangraha of Mahaaveer (9th century), or the Lilavati of Bhaaskar II.