Remember the week before? Thanks to the data, the Fed & Chair Yellen, treasury yields were rising inexorably that week prompting dire warnings of higher yields ahead. Then came the big rally in Treasury prices and steep fall in yields on Friday, September 19.

This week was similar. Thursday’s decline of 264 points in the Dow, & the break of 1967-1969 in the S&P,  prompted dire warnings of a larger downdraft. Then came the 167 point rally on this past Friday and all of a sudden, the mood improved & the future didn’t look so bleak:

The sharp Treasury rally on Friday, September 19, continued this week with TLT rising 1.2% and the 30-year yield falling 7 bps this week. So will the sharp rally of this Friday continue into next week?

The entire treasury curve rallied this week and the 30-10 yr spread fell by 5 bps to 142 bps & 30-5 yr spread fell by 2 bps to 69 bps. This is a steep flattening given the 30-10 yr spread remained above 100 bps through the entire duration of QE. The 30-10 year spread is probably one of the best indicators of inflation expectations receding. This bears out the view of many that slowdown in Europe & China is a large factor in the bull-flattening of the treasury curve .

Jim Cramer called it right, in our opinion, on Tuesday on his SOTS show:

And Cramer also uttered the “2007” term we thought he would not utter again:

Paul Richards has been a fan of Draghi all year. But he sounded a different tune on Tuesday on CNBC FM 1/2:

In his own inimitable way, Art Cashin concurred by calling it Draghi’s “where is the beef” moment.

If Richards is correct about the Dollar getting much stronger against the Euro, then wouldn’t we be importing disinflation from Europe? A guest on CNBC Closing Bell made a broader call on Friday:

No one likes to hear mention of 2008, but the action in the Dollar has been something:

The above chart doesn’t do justice to the explosive nature of the Dollar’s rally as one one below does: 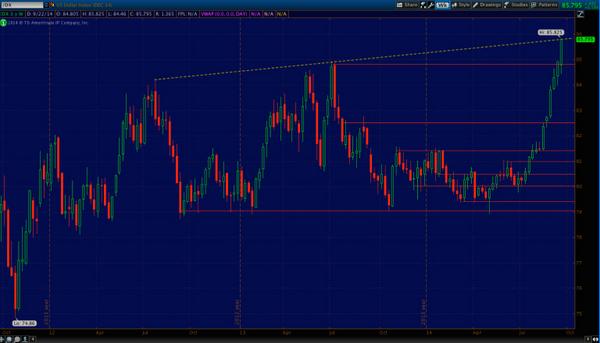 Are hedgers shorting this parabolic move? Not according to: There is no shortage of Dollar bulls today. But who was bullish back in May 2014? read what J.C. Parets tweeted on Friday, May 9:

This Tuesday, Parets went the other way in his conversation on BNN. Regarding the Dollar, he said simply:

Back on Friday, September 12, Larry McDonald of NewEdge said on CNBC Closing Bell:

The entire treasury curve rallied this week in a bull flattening with the 30-5 yield spread falling by 5 bps & the 30-10 yield spread falling by 2 bps to 69 bps. This is a dramatic flattening from the QE days when the 30-10 year spread remained above 100 bps for the duration of Bernanke’s QE. The 30-10 year spread is one of the best indicators of inflation expectations. So its flattening is powerful evidence of the view that slowdown in Europe-China & Latin America is causing inflation to fall in America.

So either Chair Yellen will end up pushing rate hikes later or the upcoming economic data will cause the yield curve to steepen.

Despite the impressive rally on Friday, all major indices fell this week with Russell 2000 falling nearly 2.5%.  How relevant and accurate was the warning issued by Ryan Detrick on Thursday, September 18?

Next week is the 39th week of the year and, according to Detrick, it “is the 10th worst week of the year“. he is worried about seasonality & in his article Is The Weakness In Stocks The Start Of Something Bigger?, Detrick expresses worry about the next two charts of his: When would it be a safer time to buy? Detrick writes:

This is consistent with what Tom McClellan wrote on Thursday:

All this is fine, but what about next week? Wasn’t Thursday a 90% down volume day? And aren’t such days good buy signals? Yes but with one catch, explains Dana Lyons of J. Lyons Fund Management. The catch is “90% Down Volume Days that were initiated from within 1% of a 52-week high”. As Lyons writes;

Dana Lyons also described an indicator for a longer term decline in the stock market in his article The Most Important Trendline In Equity Land: New Highs-New Lows. The article is interesting and discusses the message of the chart below: Lyons concludes in his article:

Below is an interesting tweet & chart about a key sector:

The rally in the Dollar has been terrible for the relative performance of emerging markets. Below are two quick views of EM: 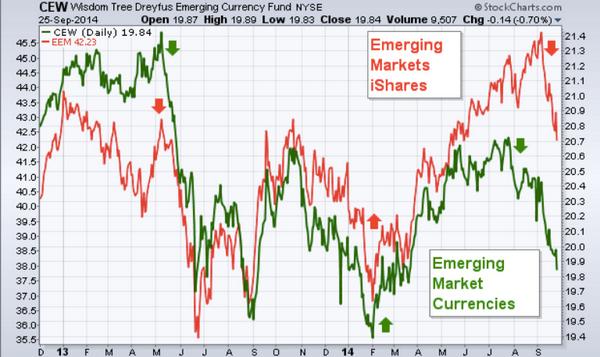 Is below why they say beauty is in the eye of the beholder? 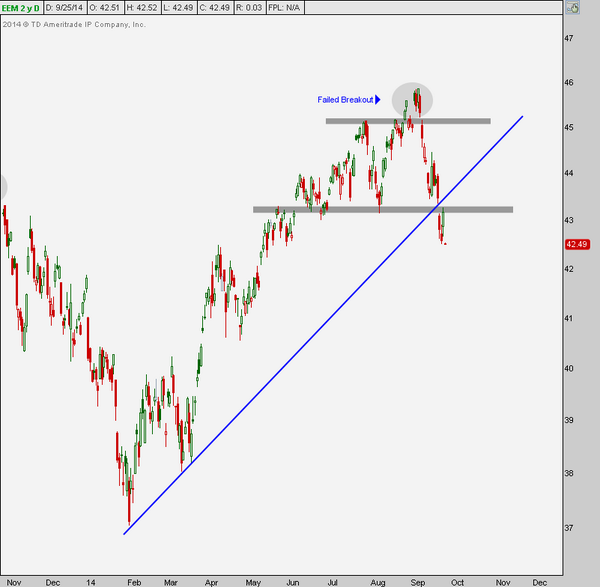 Why do those terrorists hate NYC subways? It is not as if they have to take the 4 or 5 train every morning. This has been some week with the terror threat, the stock market sell off, Derek Jeter mega event & the NY Football Giants wiping out NFC East pretenders from Washington DC. This is a week to enjoy a quintessential NY clip about Pizza & Trump that was tweeted out by J.C. Parets: