This week, the image of Indians shot up into a higher orbit, not just in America but around the world. Because India’s scientists & engineers did something no other country had done – send a spacecraft into Martian orbit in their first attempt. This is a spectacular achievement and one that has been uniformly praised by all the Western newspapers we read. What seems amazing to American observers is the incredibly low cost. 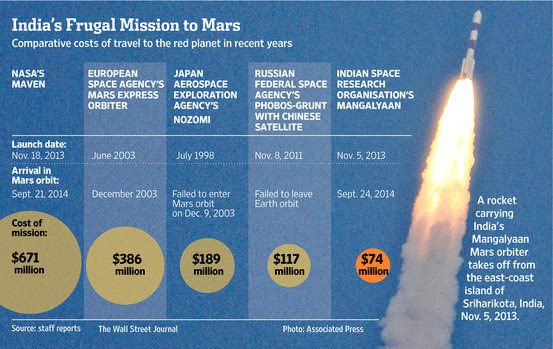 The most interesting comment came from VOX, a predominantly left od center publication, which jokingly tweeted that America should out-source space exploration to India.

VOX hit the bulls-eye with its comment. The global space market was pegged at $304.31 billion in 2012, according to the Wall Street Journal. India is aiming to capture a portion of this market, the increasingly larger low-medium budget segment of this market. A handful of countries offer satellite-launching services. The leading western providers are expensive & focused on the high end. India could end up offering a highly competitive service that is proven, relatively inexpensive and reliable. And India, with its non-aggressive soft image, is less risky than an aggressive China with its reputation for usurping technology.

As the WSJ noted, “India has launched more than 50 satellites since 1975” and “currently has around 35 satellites in Earth orbit for communication, television broadcasting and remote sensing“. The WSJ also pointed out that “in June ISRO put five foreign satellites into space in a single launch“. The main cargo was a European satellite while the four smaller satellites were from Germany, Singapore and Canada.

Delivering reliable & relatively inexpensive technology services has become India’s trademark and its strategic strength. It is not easy to do especially for American and European organizations which have traditionally been blessed with large budgets. In contrast, the Indian Space Research Organization has always operated on a shoe-string budget. And their technology has been developed in India thanks mainly to the sanctions imposed by America & Europe after the 1998 nuclear test. Building an aerospace aircraft in 2014 would have been much easier than building one in the 20th Century. This is due to technological advancements and aerospace parts manufacturing companies being able to offer more services and products. There has also been a huge rise in the number of people who have knowledge on the topic of aerospace, whether that be scientists or physicists. Of course, even if people seem to know a thing or two about aerospace, they still need to make sure that they have the right sort of equipment if they are planning on building something, even something as simple as Solvay Breather Fabrics can make a huge difference when you are building things up.

So far, India’ space technology has followed the path of India’s computer services industry – robust reliable relatively inexpensive services that western companies can use with confidence.

But the next step is difficult. India’s technology services success came from private sector companies like Tata Consultancy Services, Infosys and others. In contrast, its space technology is still dominated by the Government funded organizations. These entities are good at developing technology but not good in mass production or marketing. What India needs to do is establish public-private sector partnerships in space services where cutting edge reliable technology can be developed by ISRO and converted into business services by India’s private sector.

If India does that, then India could end up with a dominant share of the large middle segment of global Space services industry supplying services to America, Europe and other countries. 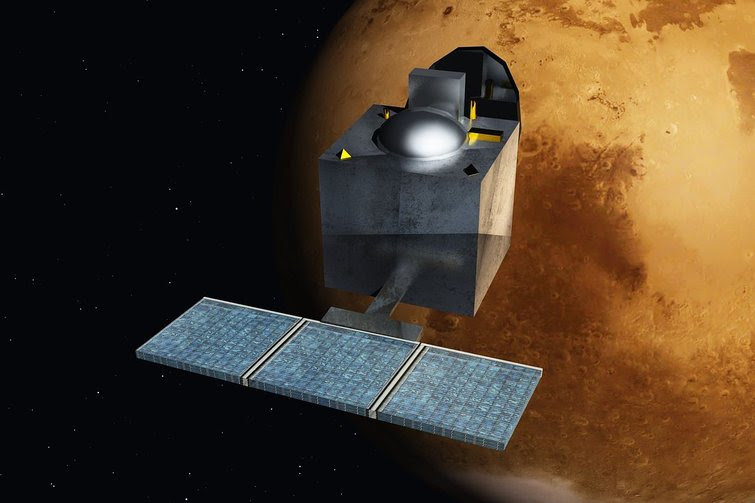 Think back to America in the early 1900s. Europe was the world’s dominant market & European companies made high end products rich in design and luxury. America, in contrast, was a relatively lower end economy with a large & growing population. European products were beyond the reach of America’s burgeoning working class. American companies developed products for this working class and ended up building the first mass market in world history. High end European companies could not match these American companies in delivering reliable products at a relatively inexpensive price.

We see this process underway today in India relative to America. Today, American companies are the providers of high end design and luxury across the spectrum in consumer products, technology services, industrial plants, and aerospace. The burgeoning middle class in India cannot afford these high end products. This has opened the door to Indian companies which can deliver reliable & relatively inexpensive services to the large & growing mid-range segment in both India and the world.

We first wrote about this analogy in February 2009 in our article Will The Indian Market Be To America What The American Market Was To Europe 100 Years Ago? Our basic thesis, though futuristic, is being validated in many sectors in this decade – Information technology, Off-patent pharmaceuticals, mobile phones & services.

The success of Mangal-yaan, India’s Mars Orbital Mission, is another step towards validation of our thesis.

What Ashley Tellis Doesn’t Get?

Earlier this week, Ashley Tellis of Carnegie wrote a comprehensive article about American expectations from Prime Minister Modi’s visit titled Kick-Start?ing the U.S.-India?n Strategic Partnershi?p. We respect Mr. Tellis. He is smart, insightful, and a veteran of America-India discussions over a long period of time. He is also honest & outspoken about failings of both America and India. For example, Tellis writes “the U.S.-Indian strategic partnership is in a rut” and places the blame succinctly where it belongs:

Ashley Tellis has a lot of skills. But he is not a global macro observer. We urge him to look at the message of the U.S. Treasury market. The 30-year U.S. Treasury bond is yielding 3.22% now. And the spread between the 30-year & 10-year treasury yield has dropped below 0.70% – a phenomenon known as flattening of the yield curve. This is not a sign of sustained improvement in the U.S. economy. The German 10-year Bund rate has dropped below 1%, a sign that Europe is on its way to Japanese style long term slowdown.

So Ashley Tellis is dead wrong in describing today as “a time when the global economy is steadily improving“. In fact, Europe is weakening faster that any one thought a few months ago and could slow down into a recession, especially if its mess with Russia is not solved soon. So the European Central Bank has no other choice to “export” its way out of their mess by weakening its Euro currency. China is suffering its own slowdown and warning that unless Europe improves, Chinese exports could suffer. Europe & China represent about $30 trillion of global GDP and about 175% of US GDP. This slowdown is destroying the pricing power of commodities thus putting Latin America into a slowdown.

In contrast, the Indian economy is relatively healthy even if India’s large corporations might not be. Unlike export-driven Asia & Latin America, India is mainly a domestic growth story. And unlike over-built over-invested China, India needs to build infrastructure and fuel greater growth. No country understands this better than China and that message was delivered by President Xi Jin Ping in his recent visit to India. This new Chinese attitude towards India is seen in China’s Asian-partnership message about India’s Mangal-yaan success:

For the first time in decades, China & India can be natural partners economically speaking – China is overbuilt & has lots of capital it needs to invest while India is vastly under-built and needs lots of capital to build its infrastructure. Japan gets this as well and that’s why there is now active competition between Japan & China to try to invest in India.

If Prime Minister Modi is able to do increase India’s infrastructure in roads, trains and ports, if he is able to achieve even 20% of what he plans, India’s growth rate will rise to a higher sustainable level thus bringing higher incomes to Indian consumers. American companies need to be in India today to be able to capitalize on that growth, growth which is very scarce in today’s world of unused capital and deflation risks. Smart American companies get it and that is why every American company that is in India is increasing its investment in India. Those who don’t are likely to miss the train.

There is tremendous potential in greater US-India trade and investment, value-added high-margin trade. But this is likely to be a partnership based trade in aerospace, high end manufacturing and research. Companies like Lockheed Martin, GE, Honeywell are poised to benefit long term from industrial expansion of the Indian economy. But that depends on the success of the strategic dialog that will take place between President Obama and Prime Minister Modi.

We are optimistic both because that’s our basic nature and because of the lucky sixth year of the Presidential cycle. The two years that raised America-India relationship to structurally higher levels were 1998 & 2006. As we described in our August 2014 article, both were pivotal years. President Clinton turned US-policy towards India in 1998, the sixth year of his presidency, and President Bush launched the United States and India Strategic Partnership in 2006, the sixth year of his presidency.

Today, as Ashley Tellis says, “the U.S.-Indian strategic partnership is in a rut“. But the air is full of optimism and hope. As Prime Minister Modi wrote in his Op-Ed in the Wall Street Journal:

These are all-American words, words that have been expressed by American Presidents like JFK, Reagan, and all American Presidents in the early 1900s. We hope President Obama & the Congress of the United States reciprocate the optimism in India about a revived robust & rowdy America-India partnership.

Mary Kissel captured the change Mr. Modi is bringing to India in the Mangal-yaan Editorial Op-Ed in the Wall Street Journal:

It is our fervent hope that President Obama & Prime Minister Modi can push America-India relationship into a higher orbit and out of the gravitational pull of mutual recriminations & transactional rut of the past six years. After all, this is the lucky sixth year, isn’t it?