Two major events took place this past week. The birth anniversary of Mahatma Gandhi on October 2 and an outpouring of affection & admiration in New York for Prime Minister Modi, today’s leader from Gandhi’s home state of Gujarat.

Mahatma Gandhi was simply the Greatest Good human of the 20th century, bar none. If there was a man who should be sanctified as a Saint by all societies & all religions, it is Gandhi. Gandhi united Indian society in the struggle for independence of India from British rule. He did so by articulating the goal in traditional Indian terms and practically by introducing movements in which ordinary Indians could participate in the course of their daily life. Each such movement bound hundreds of millions of Indians into the steady march towards Independence. In doing so, he set an example for the world.

Nelson Mandela passed away in December 2013. He was the connection to Mahatma Gandhi for our generation. We followed his struggles against the apartheid regime in South Africa, we watched him embrace his enemies and torturers as he led an emerging nation on a path of democracy and civil rights for all. Mandela acknowledged Gandhi’s influence when he unveiled Gandhi Memorial in South Africa:

Mandela’s real tribute to Mahtama Gandhi was his own long dedicated struggle against the apartheid regime in South Africa.

This week Narendra Modi paid his tribute to Mahatma Gandhi by demonstrating he intends to follow Gandhi’s methods in his work as Prime Minister. But what is his fight against? Mahatma Gandhi fought for the Independence of India from British occupation. Nelson Mandela fought for freedom for South Africans from white apartheid. What independence or freedom is Prime Minister Modi fighting for?

India did become physically independent of the British in 1947. But its administration remained British in spirit and reality. The same administration that had run India under the British now ran India under Indian Prime Ministers. Jawaharlal Nehru, the first Prime Minister of India, had received a British gentleman’s education and retained his affection for British approaches. English remained the lingua franca of India even though the vast majority of Indians can’t speak or understand it. Look closely at India and you will find that the same groups that were made successful by the British under their rule became even more successful post-1947 and groups kept down by the British have remained so. Indian Prime Ministers have been proud to communicate in English with western audiences even though the people who voted for them couldn’t understand what they were saying.

Mahatma Gandhi did not do that and Prime Minister Modi doesn’t do that. In his visit to USA, Prime Minister Modi deliberately addressed all audiences, American & UN, in Hindi. He was proud of his Hindu practices & maintained his fast even at the dinner hosted for him by President Obama. His predecessors would have felt ashamed & mortified to admit their religious practices for fear of appearing non-modern. In the tradition of Gandhi, Modi wore his traditional attire, the same attire he wears in India.

And he did all this in a casually serene & confident manner. There was not even a trace of affectation in him. He served notice to others and demonstrated to Indians that he was 100% Indian and totally free of any British or Western influence. This is the first step towards true mental Independence of India.

Mahatma Gandhi taught self reliance above all. He did not want ordinary Indians to remain dependent on the mercies of others. This philosophy was soon discarded in favor of buying votes of the poor majority via wasteful corrupt entitlement programs & by distributing money & food during elections. Removing Indians from the vicious cycle of such handouts & resultant inflation is a major task for Prime Minister Modi. If he succeeds, he will really deliver true independence to ordinary Indians. 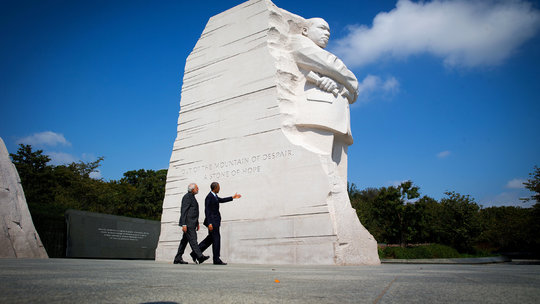 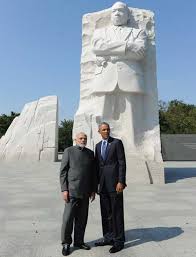 It is common in America to link Mahatma Gandhi and Dr. Martin Luther King, Jr. when discussing civil rights of minorities & non-violent civil disobedience. In reality, the struggles of these two great men were very different. Mahatma Gandhi’s struggle, like that of Nelson Mandela, was against foreign rule & disenfranchisement of the majority. Dr. King’s struggle was for equal rights for a minority, equal rights for the downtrodden segments of society.

The Gandhi-King comparison is made in America because hardly anyone in America knows of the man who is considered as great an Indian as Gandhi if not greater. No American diplomat, no Indian-American think tanker, no American reporter has bothered to tell the story of the man who is in every way the true predecessor of Dr. King and one who delivered equal rights to a far greater number of people than Dr. King.

That man is Dr. Bhimrao “Babasaheb” Ambedkar, the man who was born in the lowest “jaat” or community in India, previously called as “untouchables”. He rose from these roots to become a scholar, a jurist with Ph.D. degrees from Columbia University & London School of Economics. In 1927, two years before the birth of Dr. King, Dr. Ambedkar launched an active movement against untouchability in India. After a long arduous struggle, he won this fight. The Constitution of India was drafted under his leadership and provides constitutional guarantees and protections for a wide range of civil liberties for individual citizens, including freedom of religion, the abolition of untouchability and the outlawing of all forms of discrimination.

Mahatma Gandhi & Dr. Ambedkar were two great men that began and conducted movements for uplifting the Indian people. Mahatma Gandhi considered discrimination based on “jaat” or communities to be a horror as well. Yet, they sometimes became adversaries because their objectives were different. Dr. Ambedkar was fighting against upper strata of Indians for equal rights for India’s lower classes. This was an Indian vs. Indian fight. In contrast, Mahatma Gandhi was fighting to unite all Indians against British rule and therefore against any intra-Indian struggle that could weaken the fight against the British.

Prime Minister Modi is ideally suited to bridge this divide. He comes from the lower strata of Indian society, the strata that has historically been denied equal rights. He has made smart use of this “dalit” status in his election strategy. But, as Prime Minister, his efforts have been dedicated to uniting Indian society for economic development of all. If he can accomplish that, he will rid India of its deep social divide, a goal that eluded both Mahatma Gandhi & Dr. Ambedkar.

Editor’s Note: We celebrate the birth anniversary of Mahatma Gandhi by analyzing him from angles not explored by others. The above is the 3rd article in this series. The earlier two are: