This was the best week of the year and it really began at the depth of the decline on Thursday, October 16th. The S&P is up 100 handles since that Thursday’s close. Such is the power of the QE word uttered by a Fed-head. Recall what James Bullard, St. Louis Fed President, said to Michael McKee of BTV on Thursday, October 16:

The pause in the final taper of $15 billion is not important by itself. However, what that pause would signal is critical. After all, inflation expectations are critical to Chair Yellen as they are to Mr. Bullard. And they are going in the wrong direction:

We do not expect the Fed to pause this last taper, especially after the terrific rally in the stock market. But will they signal a more dovish attitude towards raising interest rates? Will the Fed statement back up the concern expressed in the minutes of the last FOMC meeting released on October 8th? Or will the Fed statement be substantially similar to the one released on September 17th? What has been factored in the rate markets? One view is:

Some recall the FOMC meeting on October 31, 2007 which came after a massive rally in stocks. Bernanke disappointed the markets with a more hawkish than expected statement and stocks sold off in November 2007. Today is a different scenario with all the central banks maintaining a zero rates policy with a verbal commitment to QE. That is why the markets behaved this week with the conviction that last week’s decline marked the bottom after a 10-% correction.

Many people have talked about 2007 but is it possible we see a 1999 type run to the end of the year? The Fed gives a dovish signal, BoJ talks QE on Friday, & Draghi follows up with expectations if not actual buying. The U.S. data comes in OK just like the earnings this week. Republicans take the Senate in November and Ebola becomes less scary. Can we see a stampede into year-end in search of performance?

What will a dovish Fed mean for the U.S. Dollar? Hedge fund icons don’t think that matters:

And the sentiment picture seems ripe for change to:

On Monday, Parets posted an article titled Was That A Failed Breakout in the US Dollar? In that article, he uses a chart to demonstrate the crazy bullish sentiment referred to in his tweet:

Then Parets looks at the chart: Chair Yellen will rule on this debate between fundamentals & technicals on Wednesday, October 29.

We think simplistically that what Chair Yellen says will determine both the if & how of the year-end stock rally. Others, like David Kotak of Cumberland Advisors, come to that decision with deliberation and analysis. He thinks that “interest rates at the short end of the yield curve will remain very low well into 2015 and then rise slowly.” So he wrote on Friday:

John Burbank of Passport Capital was more cautious in his comments to CNBC’s David Faber:

Ryan Detrick argues for a strong year-end rally in his article Three Charts That Scare The Bears: Detrick ties this together via:

Bearish technicians have been proven wrong this week. Carter Worth who recommended selling at the end of last week thereby missing the best week of the year. But he remained steadfast on this Friday on CNBC Options Action:

Also wrong was Jonathan Krinsky of MKM Partners who, according to the Wall Street Journal, wrote on Monday:

These are veteran smart technicians but, as we have said before, when markets smell more QE, charts get run over. But what about traders who see a potential 2007 like pattern like @NorthmanTrader whom we featured last week? On Monday, he tweeted with foresight:

The S&P closed on Friday at 1965 just shy of his 1970 prediction. His thesis was that the S&P will get a new high as it did in 2007. He seems to still maintain that based on what he wrote on Wednesday in his Ursus Interruptus post:
What is Ursus Interruptus? Read his article.
4. Emerging Markets
This Sunday’s election in Brazil represents a purely binary outcome. Dilma Rousseff vs. Aecio Neves is portrayed as a contest between rally and fall at least among investors. Brian Kelly of CNBC FM didn’t care who won because Brazil has a huge economic problem – its main customer China. His show-mate Tim Seymour is bullish because the market would rally big if Neves wins and the 80% of a Dilma victory based decline is already priced in. So he is a buyer.
A more detailed case was made by Dana Lyons in his article Time for a Brazilian Lift? His view:
5. Bonds
Treasuries had a relatively bad week with yields rising 6-7 bps in the 5-30 year curve. TLT & EDV were down 1% & 1.7% resp. What happens next week depends on Chair Yellen. If the Fed statement is dovish on future rate increases, then short rates could fall. What happens to the long end depends on rally in stocks? The 10-year & 30-year rates closed this week above their key levels of 2.25% & 3% resp. .

Tom McClellan also sees a top in bonds from a different angle in his article Deflation is Getting Too Popular:

The point of this graph?
6. Gold
The near term action in Gold should be related to the move in the U.S. Dollar & the Fed statement. That is why we couldn’t find tweets that offered opinions, only ones that asked questions: 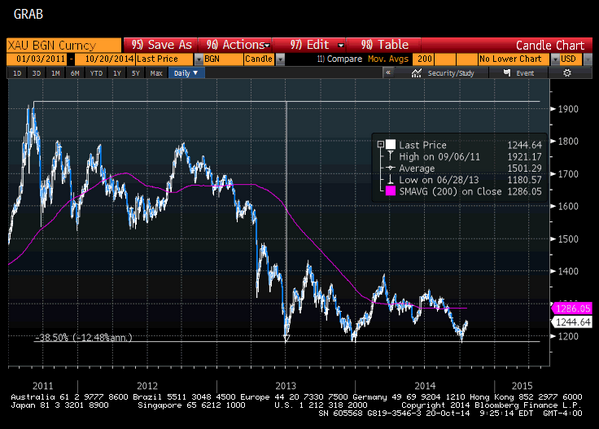 But what about the relationship between Gold miners & Gold? 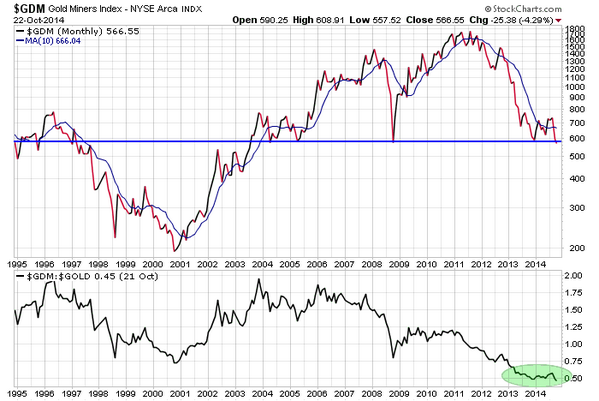