Go back to Thursday, September 18 and recall what the economic cognoscenti said in response to the Fed statement & Yellen’s press conference. They virtually promised us that Fed was determined to raise rates. Then came the big rally in Treasuries on Friday, September 19th.  From September 18th to the lows this Wednesday, yields on the 30-year, 10-year & 5-year treasuries fell by 26, 23 & 16 bps reps. With this rally, the talk of Fed’s determination quieted down.

Then came the 248,000 NFP number on Friday morning. Not great by any means but a good number. And the Fed came into play again. Read what Paul Richards of UBS said on CNBC FM 1/2 on Friday:

On the other hand, Steve Liesman articulated the real fear of the Yellen Fed:

Why would they have that concern? Zero wage growth in Friday’s number as ECRI’s Lakshman Achuthan pointed out on Friday. This means negative real wage growth which Chair Yellen is focused on. Achuthan also pointed out that median family income has fallen by 1/8 over the past 10 years and that is also true in all major economies in the world. These are not conditions that are ideal for becoming hawkish, Chair Yellen might say.

If she does, she would be in sync with the Treasury market which flattened by 5 bps on the 30-5 yr curve. And the 30-year yield actually closed down on Friday. To simple folks like us, the Treasury market is sending a clear signal that raising short rates will slow down growth & lower inflation. The frustration of Chair Yellen at this action was voiced by Jim Cramer’s colleague Stephanie Link who cried in sheer anguish on Monday on CNBC FM 1/2 – “darned yield will not steepen“

And remember what  Jeff Gundlach said back on Friday,  August 15,

Of course, Richards is talking about removing “considerable period” from the Fed statement and not raising rates. What would the treasury market do if Chair Yellen gave them this signal? – Front-run the actual hike right away, we think. And catapult the U.S. Dollar to a higher moon.

The chart of the U.S. Dollar looks like it is Netflix or what Tesla used to be. Fundamentals say the Dollar rally continues. Europe is “in serious trouble” now and “Draghi is running out of bullets” as Paul Richards said on Friday and Japan will keep printing money. On the other hand,

What are the big boys thinking? More importantly, how are they acting? The title of Tom McClellan’s article on Friday is a give-away – Commercials Betting on Big Dollar Downturn:
This reversal, if it happens, he writes “will have profound implications across multiple market segments“:

What if Chair Yellen disappoints Richards & his cohort by keeping “considerable period” in the Fed statement on October 29? Remember that FOMC meeting does not come with a press conference. So the Fed statement will be the only window into their thinking. And what if Draghi continues to disappoint on QE? Will these twin disappointments weaken the US Dollar? Or will it take bad US data?

3. The other extreme of the week

This dovetails with the tweet below of Ryan Detrick:

The article of Ryan Detrick relies on 8 charts including the one above to argue for a lasting bounce in equities. His charts are interesting & we urge interested readers to read his article. His bottom line is:

The amazing stat from his article is the following:

The last and the longest was the streak of 14 quarters from Q1 1995 to Q3 1998. That was the prior period of strong disinflationary growth in America. Only Japan was going through its deflationary crisis then. Today, Europe has joined Japan & China looks like it might follow. Will this global weakness come through in S&P earnings? No is the bet on which Detrick’s confidence is based.

The most helpful call of this week came on Thursday just after 12:00 pm from the tweet below: 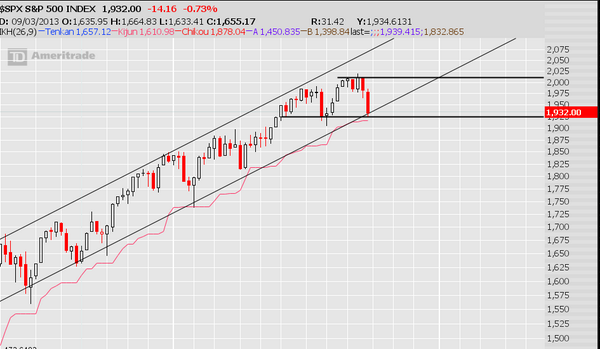 There were others tweets that were similar and made the case for a bounce. Such tweets & charts are why we focus on tweets these days rather than on strategist opinions. We recall Mark Haines was so furious once that he banned his guests from using the term “cautiously optimistic“.

The biggest divergence in the stock market is the relative performance of small caps to large caps. Dana Lyons writes that this quarterly divergence was “Last Seen in 3Q 2007. He adds:

One way to correct this divergence would be for small caps to outperform large caps in Q4 & beyond. That is the argument Adam Parker of Morgan Stanley made to Scarlett Fu of BTV on Thursday:

But what if small cap bulls like Parker are wrong? 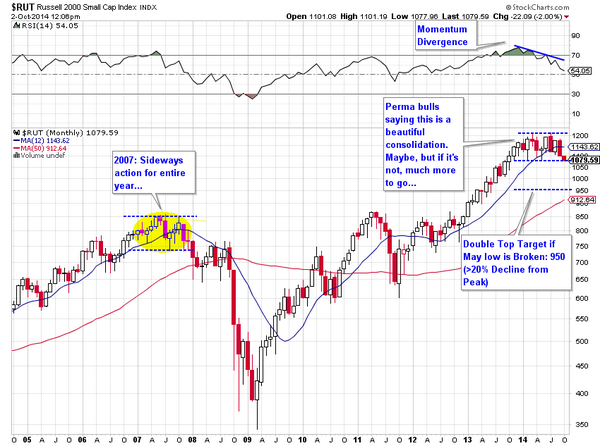 If small caps are bad, mid-caps are worse according to what Lori Calvasina of Credit Suisse told CNBC FM on Thursday:

Richard Ross of Auerbach Grayson a similar view of mid-caps as he said on CNBC Talking Numbers on Wednesday:

Larry McDonald has made good calls this year using his capitulation model, the last one being “I think the 10-year is a screaming buy here” on Friday, September 12. Since then, the 10-year yield has fallen by 16 bps & TLT has rallied by 3.8%.  This week, he recommended EWZ, the Brazil ETF, in his proprietary Bear Traps newsletter:

That is what John LaForge from Ned Davis Research told Amanda Drury of CNBC Street Signs on Thursday:

Normally such calls suggest capitulation but this is gold in a vertical rally of the U.S. Dollar. On the other hand, you have the possibility of a bounce as suggested by: 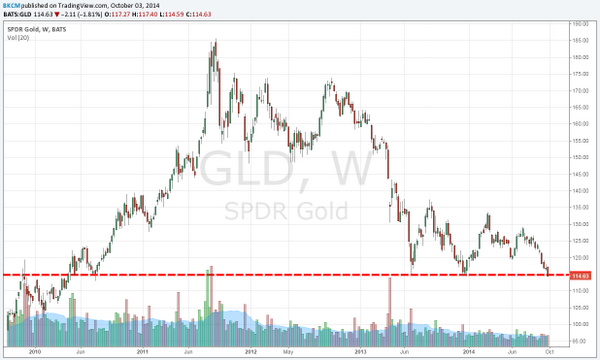