This singularly unoriginal title is courtesy of the new Red Robin slogan “who’s your burger daddy?“. We won’t accept Red Robin as our “burger daddy”, but no one can doubt that China is the daddy of commodities. Not after Friday’s rally in Commodities after China lowered interest rates Friday early morning. EEM, EWZ, EZA, CLF, FCX rallied 3%, 7%, 4%, 13%, 3% on Friday, a huge outperformance over S&P 500 which was up only 1/2%. Wilbur Ross described this move as a “very good and very useful move” because “it is an early stage of quantitative easing“. Tim Seymour of CNBC FM called it “definitely a FX war” between China & Japan, a stronger point than his tweet on Friday morning:

Forexlive.com seemed to concur with Seymour in their post “almost everyone is missing the point with the Chinese rate cut”:

As Seymour’s FM colleague Brian Kelly said, things must really be bad in China for them to take this drastic step. On the other hand, it could be a pre-emptive step against Japan’s deliberate crash of the Yen. The Yen-Yuan ratio used to be critical in the days when China was content to be an exporting nation. Now China is supposedly trying to focus on consumption. Friday’s easing suggests that the restructuring of the Chinese economy is not going smoothly. So the big question remains whether Friday’s easing is merely the first step to further easing. That answer or the market’s perception of that answer will determine how far the commodity rally runs.

The entire commodity & commodity-nations rally has been due to the Chinese credit bubble as the chart below from EconMatters demonstrates:

Frankly, the next 5-6 weeks could be all about beta-chasing for year-end performance. And a hope-based fierce rally in laggard EM markets & commodity stocks might be just the medicine performance-based investors might drink.
2. “he has absolutely no credibility”
so said Richard Bernstein about the central banker whose words move risk markets. Others might have thought so but no one had the chutzpah to say it aloud so explicitly. Kudos to Bernstein who added:

Bernstein said on this CNBC Squawk Box. Had he said that on CNBC StreetSigns, Drury-Sullivan duo might have educated him about “hopium”, their favorite word. You see, Mr. Bernstein, markets will believe what is convenient for them to believe. And what is convenient right now is bullishness on stocks & risk assets for a run into year-end. So everyone is waiting for Draghi to say something more concrete & ideally do something in the first week of December. Because no one wants to have to sell before year-end.

What does Draghi want above all? 2% Inflation. And how does that look now to ThomsonReuters? 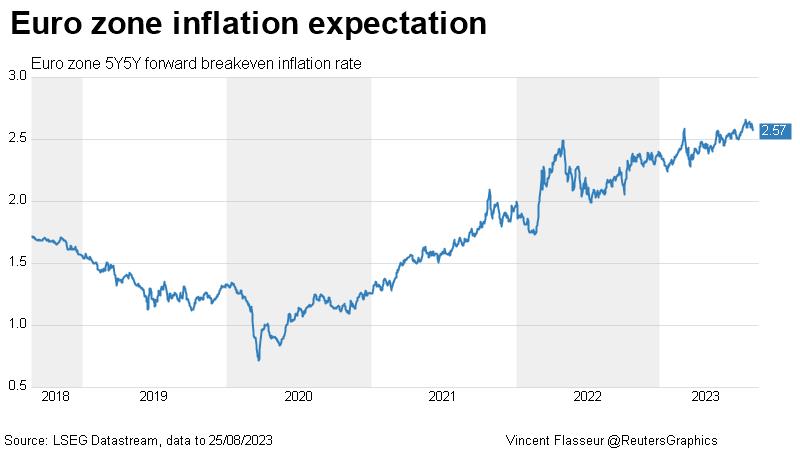 So what can Draghi do? What the BoJ did as WSJ argued on Friday:

This does create fodder for some: 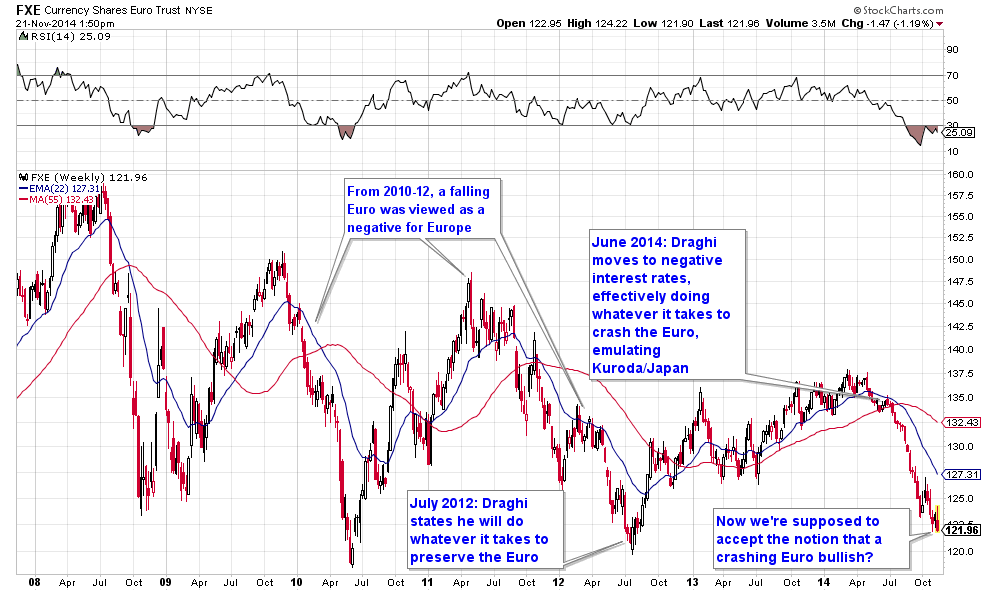 Draghi gets Bilello’s sarcasm but Bilello doesn’t get Draghi’s reality. What matters right now is effort and not outcome. No one knows what the outcome of all this global QE will be anyway. So, sort of like Tennyson’s brigade, it is but to do right now and hope. Fortunately, markets so far have been willing to go along with hope.

At this point, there may be only two truths. The first is secular:

The second is as near-term as you can get:

The U.S. market has been about gaps – upside gaps at the open due to news events like Friday morning. What happens to such opens. Chad Gassaway explains in his article Big Gaps At All Time Highs:

That is why those hooked on hopium who buy upside gaps have been rewarded this year.

Kudos to a twitter-trader who has been right often. Where does she think S&P goes next year?

Bernstein & Dwyer consider the market as fairly valued or not expensive. The other side comes from : 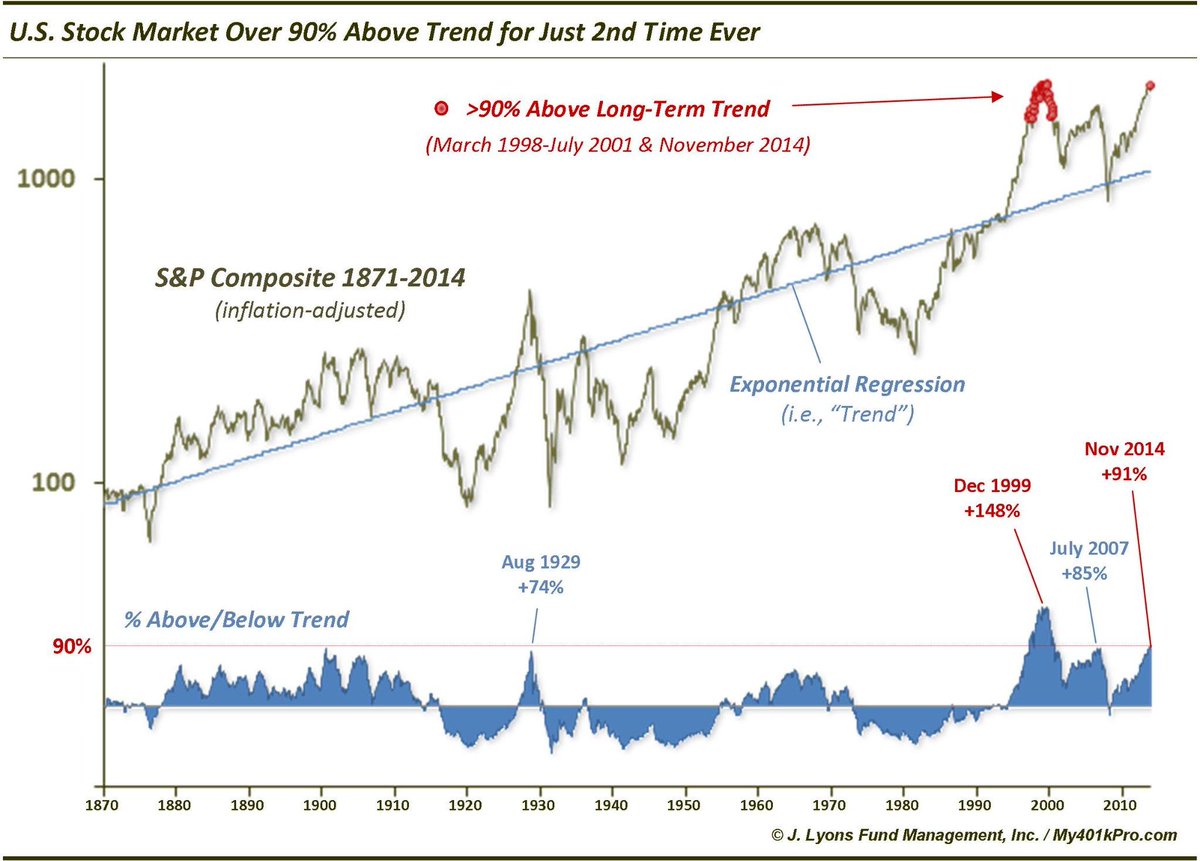 Notice that the S&P did not make its high of that cycle in December 1999 but three months later on March 24, 2000. So the chart above is not necessarily a sell signal right now.

But what about out-performance of US equities? 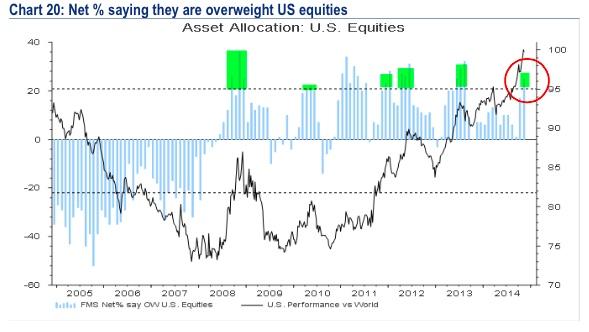 That brings us to where we began. Does EM provide a beta-charged return over the next 5-6 weeks?

Interest rates fell a bit this week, thanks again to another Friday. It was amazing to see the 30-year yield fall by 3 bps on such an up risk day as Friday. Is the consolidation since the flash crash over? Guy Adami of CNBC FM argued yes because TLT recaptured the 120 level.

The 30-5 year curve flattened by 3 bps this week. Will the Fed tighten as long as the 30-year keeps getting lower & the 30-5 curve flattens? How can the Fed steepen the curve? One way is, as Ira Harris told Rick Santelli, the Fed will not tighten in 2015 if the economy stays like it is now. And,

Isn’t inflation is the primary consideration for the Fed?

With Japan, China & Europe all serially & seriously engaged in lowering their currencies, how does the U.S. Dollar stop becoming stronger? And how does inflation get into America with a strengthening U.S. Dollar?  So why shouldn’t Chair Yellen keep rates low and allow for wages to rise in a disinflationary America? That is why we think the Treasury market will have to raise short rates and lead the Fed. But for that, the 30-5 year curve has to bear-steepen.

Gold miners had another good week with GDX up 4% and GDXJ up 9.5%. Gold & Silver were up about 50 bps and 1% resp. A world in which rates are falling faster than falling inflation cannot be all that negative for gold, especially after rates get near their lows. Add a stock rally to that and you could have some action in Gold miners despite their overbought condition after a ferocious rally since the first week of November. And those who prefer volume with price gains should look at: 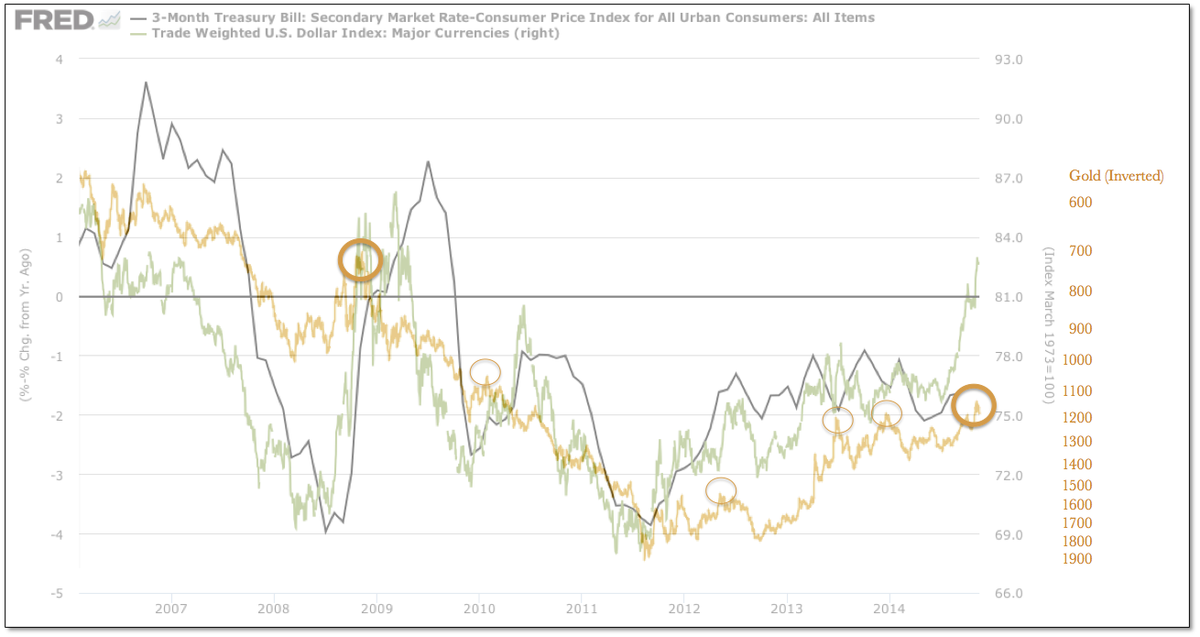 What will next week’s OPEC meeting bring? Tim Seymour of CNBC FM predicted on Friday that OPEC is willing to wait out the decline but they will cut production by 500,000 barrels and Oil will rally. His FM colleague Steve Grasso suggested selling energy stocks next Friday. Here was Seymour talking major policy change in China & predicting a rally in Oil only to suggest “sell IWM” as his final trade on Friday. And Steve Grasso despite his negative talk about energy stocks suggesting buying energy stock MHR as his final trade. What’s with that? Walk contrary to talk?

We may not get these FM guys but we do get what Wilbur Ross says and said on Friday on CNBC Squawk Box:

Natural Gas fell hard on Friday. Is that because the cold arctic blast is behind us? Bespoke seems to think so in their article Is The Short Term Top in on Natural Gas?