Last week, we saw a “ripping” payroll number that shook the Treasury market. This week we saw really bad data. Even the author of the “ripping” comment, David Rosenberg, seemed confused this Friday:

“What’s going on here” Betty Liu of BTV asked Chairman Greenspan on her “In the Loop” show:

For once, Greenspan gave a simple & straight answer:

But why weak retail sales? Stephanie Pomboy of MacroMavens provided a simple explanation to Maria Bartiromo on FBN:

But what about the deceleration in the last couple of weeks? The weekly model of the Atlanta Fed for Q1 GDP has come down from 2.3% two weeks ago to 0.6% on March 12.

What drove this deceleration? Is it the parabolic rise of the Dollar? David Rosenberg wrote on Friday:

But how much is the impact? Ellen Zentner, Chief Economist at Morgan Stanley answered that on CNBC Closing Bell on Friday:

We saw that this week with negative ex-energy import price data negative core PPI. If the Fed is really data-dependent and this data is taking them in the opposite direction, can the Fed really tighten? Ellen Zentner argued no but said the term “patient” will come out next week.

May be that’s why Treasuries closed negative on Friday, a day when the long end should have been up 1% with the severe downdraft in stocks. It still is all about the Fed, as we wrote last week.

2. Could the Fed make a mistake? What mistake?

We first wrote about flattening of the yield curve last year on January 11, 2014:

Through 2014, we wrote that, via flattening on strong data, the treasury market was signaling that the Fed would be making a mistake by raising rates. Last Friday confused us because the treasury market went the other way and bear-steepened on the strong payroll number. But that proved to be a one-day wonder and this week the 30-5 year curve flattened back to 110 bps, back to its level two weeks ago.

That the Fed would be making a mistake by tightening became a more accepted view this week. Jon Hilsenrath wrote in the Wall Street Journal: 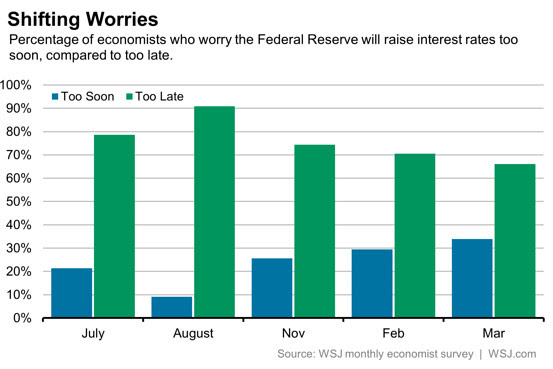 A number of luminaries expressed their misgivings about Fed raising rates:

On the other hand, the Fed has made it clear that they are frustrated at being forced to maintain zero interest rates.  Gary Cohn of Goldman Sachs laid out their problem succinctly in his conversation with CNBC’s Carl Quintannia:

And what’s the hurry asks the chart below: 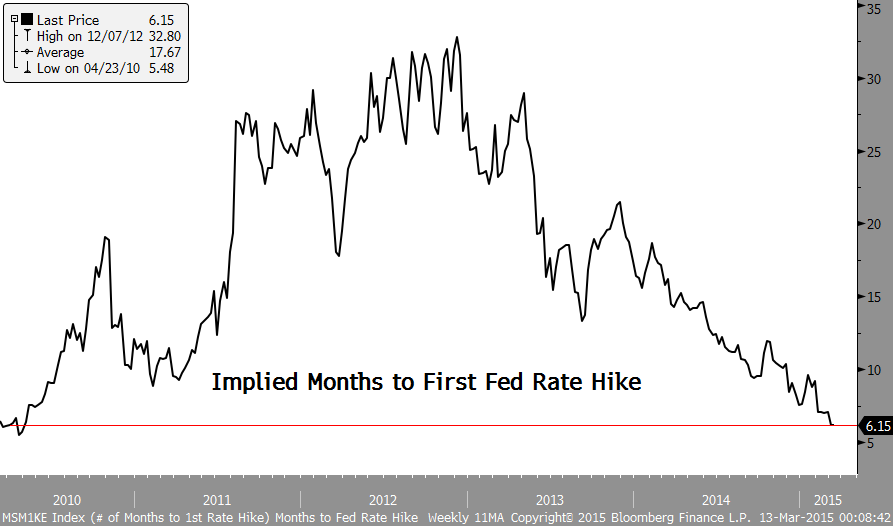 If currency strength is causing deceleration in US data, then shouldn’t European data be improving with Euro weakness? Deutsche Bank said yes in on Friday:

And “Europe is on sale today” said Gregory Hayes, CEO of United Technologies, on CNBC Squawk Box & added “With the euro falling to near parity with the dollar, properties that once seemed out of reach may now appear actionable.” In contrast, “valuations are sky high” in the US, Hayes said. 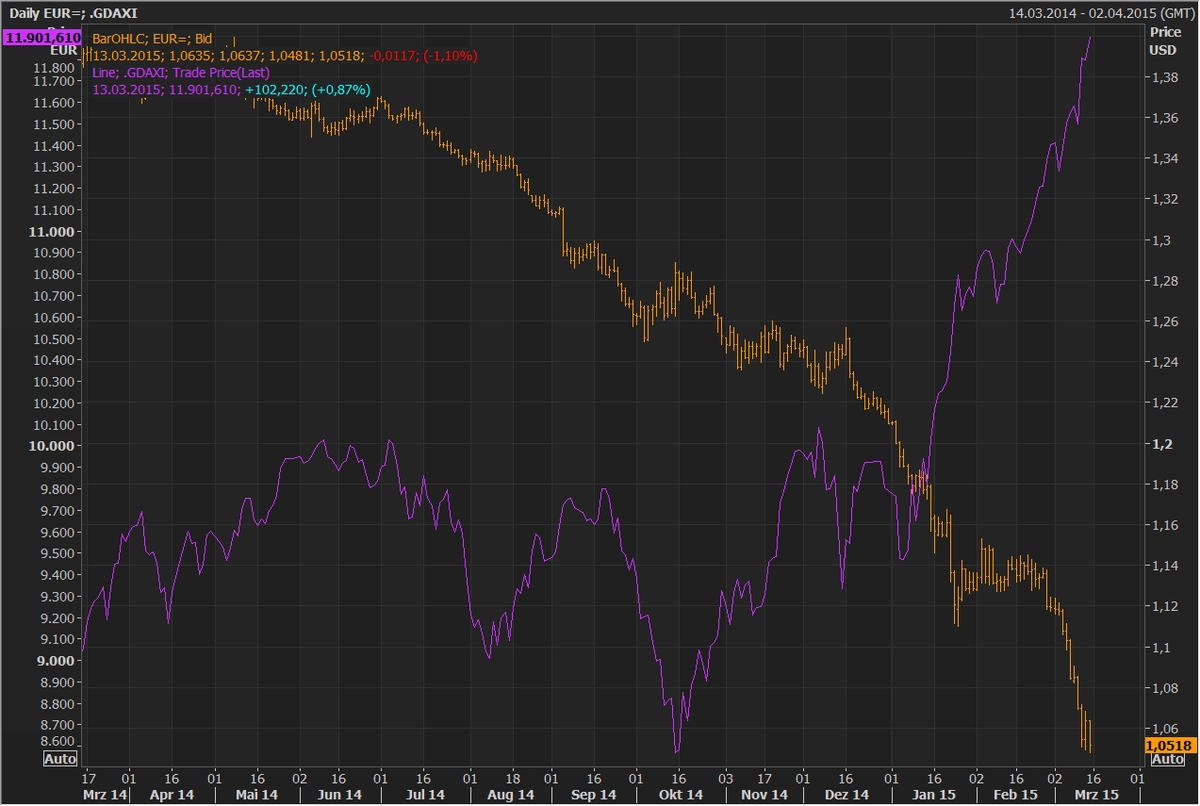 Yield differentials are what drive currencies we are told. Look at the chart from Abnormal Returns: So this should mean record inflows into the US Dollar, right? Not according to Deutsche Bank:

Art Cashin called the recent rise in the Dollar as “parabolic”. Frankly, it seems vertical rather than parabolic to us.

Trajectory is one thing but what about the scale? 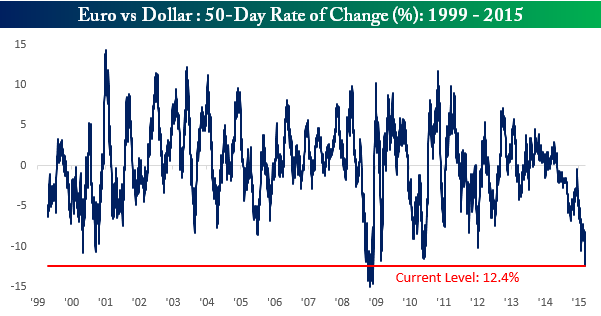 Such moves bring in their wake target changes from analysts who drove down their targets for the Euro to parity, 0.90 & 0.80 & so on. The chart from the Wall Street Journal tells this story. 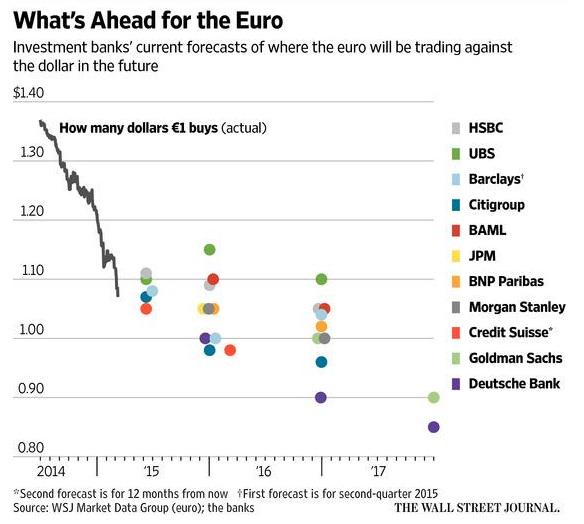 Cashin suggested that parabolic moves tend to be get reversed. A more detailed case for Euro bounce was made on Friday morning in: 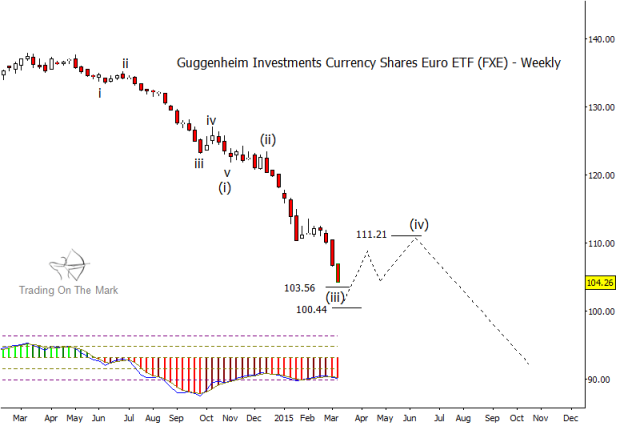 Is anyone ready for a sharp retracement in the USD-Euro price? And what would happen to the DAX if the Euro rallies hard in a squeeze?

Kudos to two long term bulls who turned cautious this past Monday just before the declines of this week.

Gregory Hayes of United Technologies termed valuations of US companies as “sky-high”. Simplistically speaking, valuations tend to become sky-high when equity allocations are at an all-time high.

If the above 2007 comparison is not enough, see 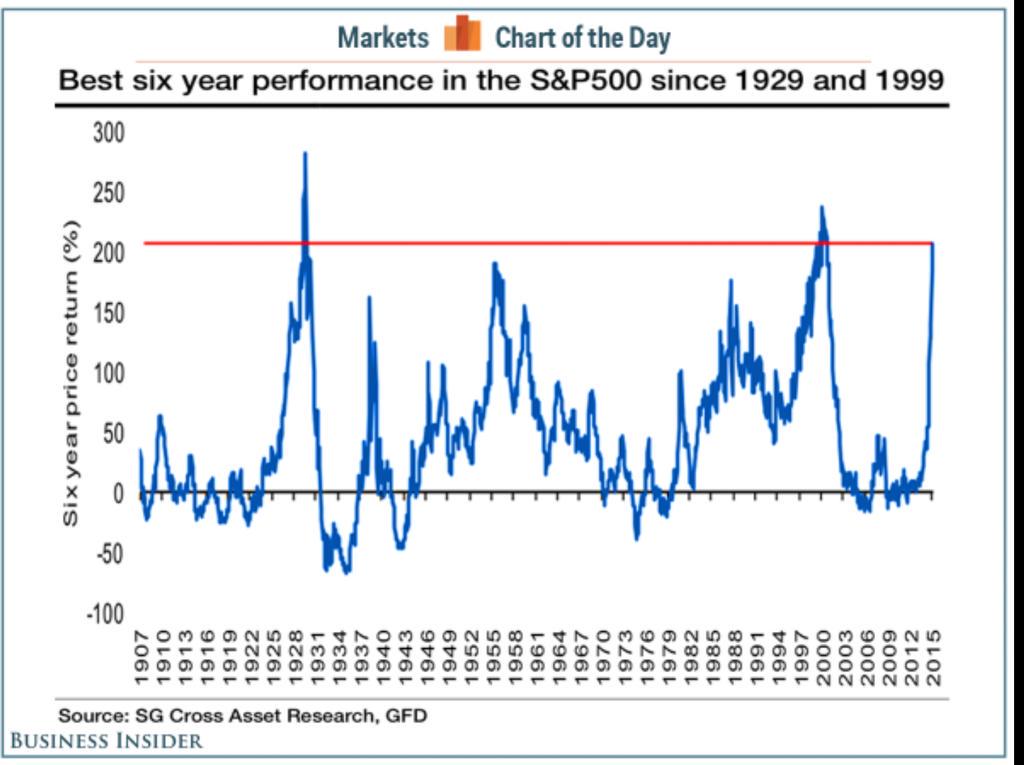 After these scary charts & warnings from Siegel & Stovall, wouldn’t it be ironic if the U.S. Equity market rallies next week with the Fed sounding dovish, with Dollar retracing & due to oversold conditions? 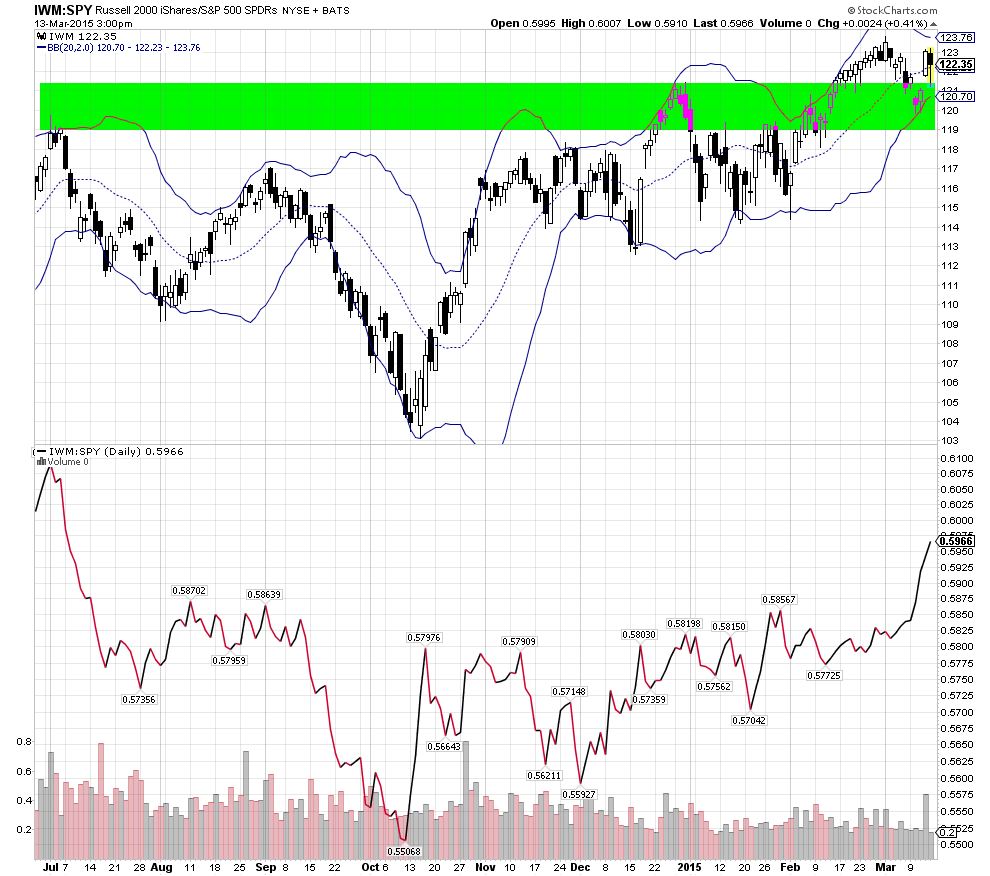 Kudos to J.C. Parets who alerted his readers on Tuesday in his article Small-Caps Could Be Emerging As New Leaders. He followed up on Wednesday:

Oil had a horrible week with USO, the WTI ETF, down 7.5%, and BNO, the Brent ETF, down 8.5% on the week. The story was all about running out of land storage in a month or two. The old adage about low prices becoming the cure of low prices is not playing out. Falling rig count is simply not curing the excess production of oil. 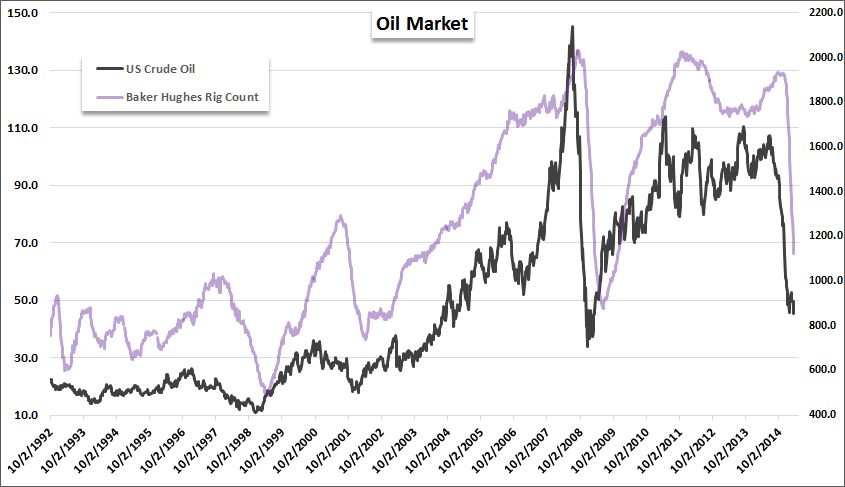 Why? Gary Shilling explained on BTV Surveillance on Monday: 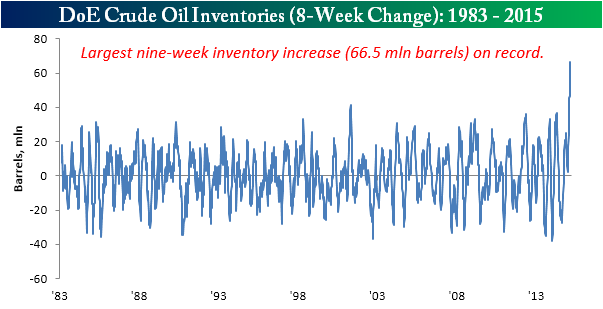 Goldman’s Gary Cohn gave voice to why and what might happen in a couple of months in his conversation with CNBC’s Carl Quintannia on Wednesday:

But the real reason Oil could remain low for awhile and could indeed plunge to $10 per barrel is demand destruction. That is what Gary Shilling argued on Monday on BTV Surveillance. Both Dr. Shilling’s track record and the deceleration in the global economy should dissuade people from laughing at this forecast.

And what about Gold? Jeffrey Gundlach said in his webcast on Wednesday that Gold could touch 1,400 in Dollar terms this year.