Is the U.S. economy improving or faltering? We don’t have a clue unless some how employment is OK, income is higher, spending is improving but manufacturing, GDP etc. are crappy. Yes, Q1 GDP came in at 0.2% – #Fuggetaboutit. We all know it is history. But then the Atlanta Fed chimed in about Q2 on Friday with their forward looking forecast: So GDP is pukey & Manufacturing employment data is declining. Where then is the positive news?
Those who prefer pictures,
or as Quartz put it simply – The impossible just happened: American wages are rising
With rising incomes, credit should flow, right?
So we have rising wages, higher personal incomes, increased availability of credit and all this leads to 0.8% Q2 GDP? We can’t even laugh at the Atlanta Fed because they hit the bulls-eye for Q1.
We are not smart enough to figure it out. So we will wait for next Friday’s payroll report.
2. Fed Meeting & its impact
What did the Fed say, really? All we remember is that they removed the calendar guidance. So they are now even more data-dependent than they were before? They dismissed Q1 weakness as temporary. Will they dismiss Q2 weakness if Atlanta Fed proves correct again? We can’t tell but then we can’t even tell how the markets reacted to the Fed statement, not even after 2 full post-Fed trading days.
The most immediate action we saw was in FX: 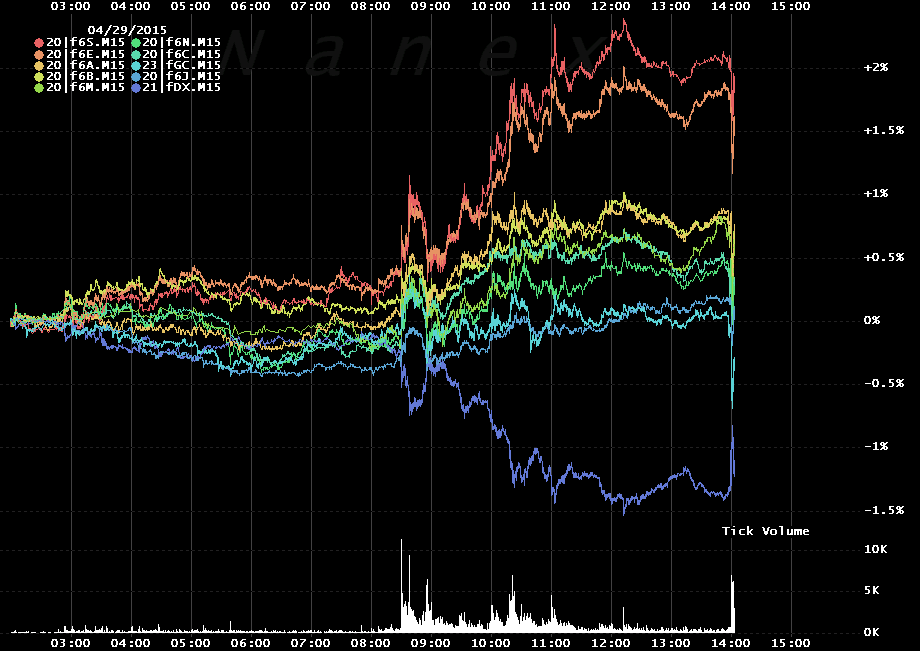 Interest rates shot up despite the pathetically weak Q1 GDP. Rates were already on a rising trajectory and the trend assumed what it wanted to assume about the Fed. Or as forexlive.com asked – is it a massive unwind of a big macro trade?

A similar point was made on Thursday by:

But what about Draghi’s QE? 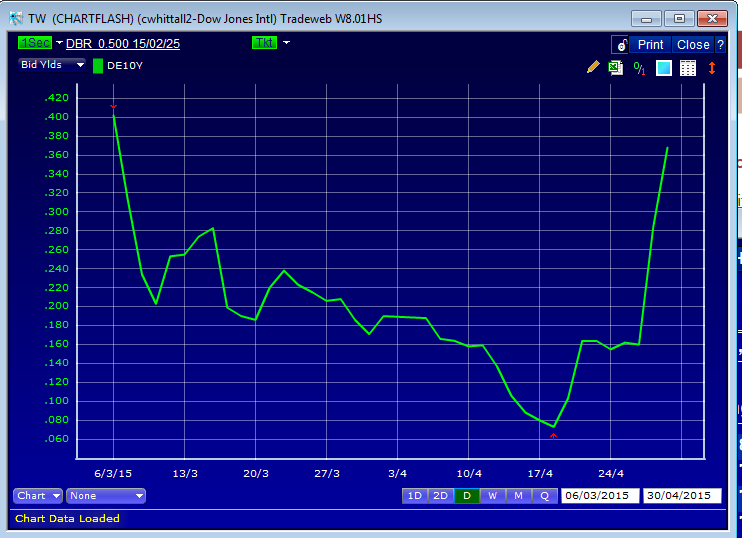 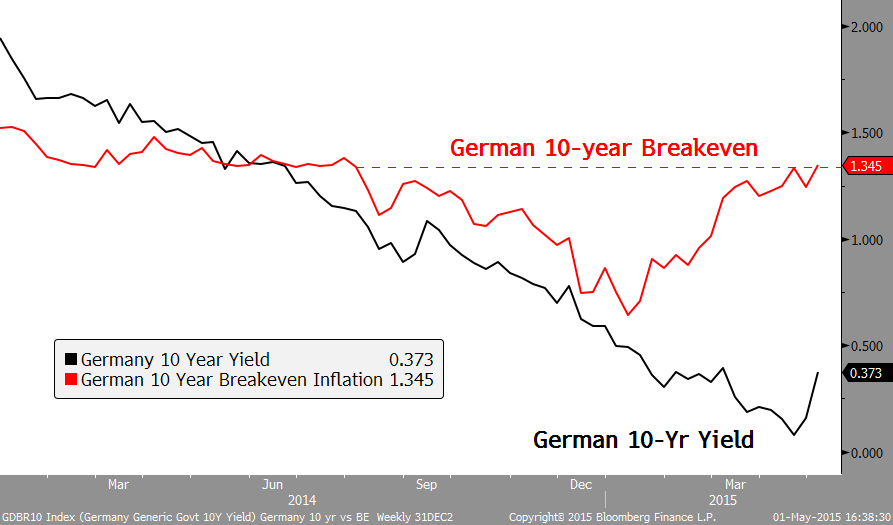 If a small exit caused this tumult, what will happen when a big positions in Bunds & Treasuries are liquidated? What about the huge monies invested in Euro-short European equity mutual funds?
Fortunately, the Dollar has gotten oversold & the Euro overbought by week’s end. Do we get a counter-trend move next week, at least until the payroll report on Friday? What about the intermediate term for the Euro? UPDATE: Euro Facing First BIG Test In Its Bottoming Attempt
Read his article for details on Hemachandra-Fibonacci levels. A summary of what he wrote:
This week might have served as a glimpse of what might come one day when a few big positions get closed. What is that investment tenet – when elephants fight, rabbits should dive into their holes?
Come on Chair Yellen, go ahead and make our day by tightening into this mess? It would be fun to watch assuming we are safe in our rabbit holes by then.
3. Treasuries
This was just as bad a week for Treasury yields as it was for Bund yields. The 30-yr & 10-yr yields rose by 21-20 bps & the 5-year yield rose by 18 bps. The 3-yr & 2-yr yields rose by 12 bps & 9.5 bps resp. Yields rose every day of this week across the yield curve regardless of the economic data or the Fed.
This action made a mockery of the GaveKal article on Tuesday titled The Smart Money Is Getting Long Treasury Bonds Again. They could be just early thought given that commercials are patient money.
The Treasury ETFs, TLT & ETF, fell by 4% & 5.5% resp. By Friday’s close, TLT was sitting at $124.00, just atop its 200-day moving average or $123.95. As we have noted before, a decisive break of the 200-day moving average has resulted in a significant fall into June-July. The 30-year closing yield of 2.8270% is just below its 200-day moving average of 2.87%. So next week should prove critical.
Larry McDonald & ACG Analytics put out a capitulation buy of 1/3rd position of TLT on Friday afternoon and Keith McCullough tweeted that he had “sent out a signal to buy Munis and Treasuries earlier today” and that TLT was “right back to where you could have bought more in DEC, MAR, and now MAY“.
Those who believe that high yield bonds are a good place to hide when the Fed raises interest rates should run not walk to hear Jeffrey Gundlach’s views. His interview with BTV’s Erik Schtazker is a must watch in our opinion.
The really interesting part of the interview is about what might happen when interest rates begin rise secularly and that, Gundlach, believes may not happen for a couple of years.
4. May is here
Every May we hear about the “Sell in May and Go Away” expression on FinTV. This time, we will preempt that discussion by charts from smart traders.

This is a detailed article that looks at May from two different angles. Read it to get the full value of the discussion.

But what about the next 3 months? Dana Lyons answered that in his article May Has Become The (short-term) “Toppiest” Month.

5. Equities
The past two declines have been reversed in just one day. This is impressive and suggests that as soon as the selling stops, the markets reverse as if on a string and snap back. We will see if this Friday’s snap back leads to another run at the highs. That’s when we will see if we can break through or fall back again. Remember 10-year yields oscillated for 27 sessions between 1.86% & 1.99% to break out this week with force. It does feel as if there is a move coming in equities, up or down.
Another way to look at it is:

The oscillator seems to suggest a direction: What the oscillator above suggests was expressed differently by Roger McNamee, as fundamentally driven as any one is.
All this caution & lack of exuberant bulls does make one wonder whether the stock market could surprise on the upside in the summer – yields could fall, payrolls could come in just enough, Greece might get a deal and who knows, we could get a new high in the next couple of months. And who knows S&P could even outperform Emerging Markets in such a move. The bigger surprise might be if S&P goes on such an up move while bond yields rise hard into June-July. That, as we recall, what happened in 2007.
5. Commodities, Oil & Gold
The swagger in commodities is back with an impressive rally in Copper and of course Oil. Copper is a relative newcomer to this rally but Oil has been phenomenal.

The previous signals have led to higher oil prices at least in the short term.
And T. Boone Pickens is back. He was bullish and gave simple reasons for his bullishness to CNBC’s Brian Sullivan:

A similar target was given by: 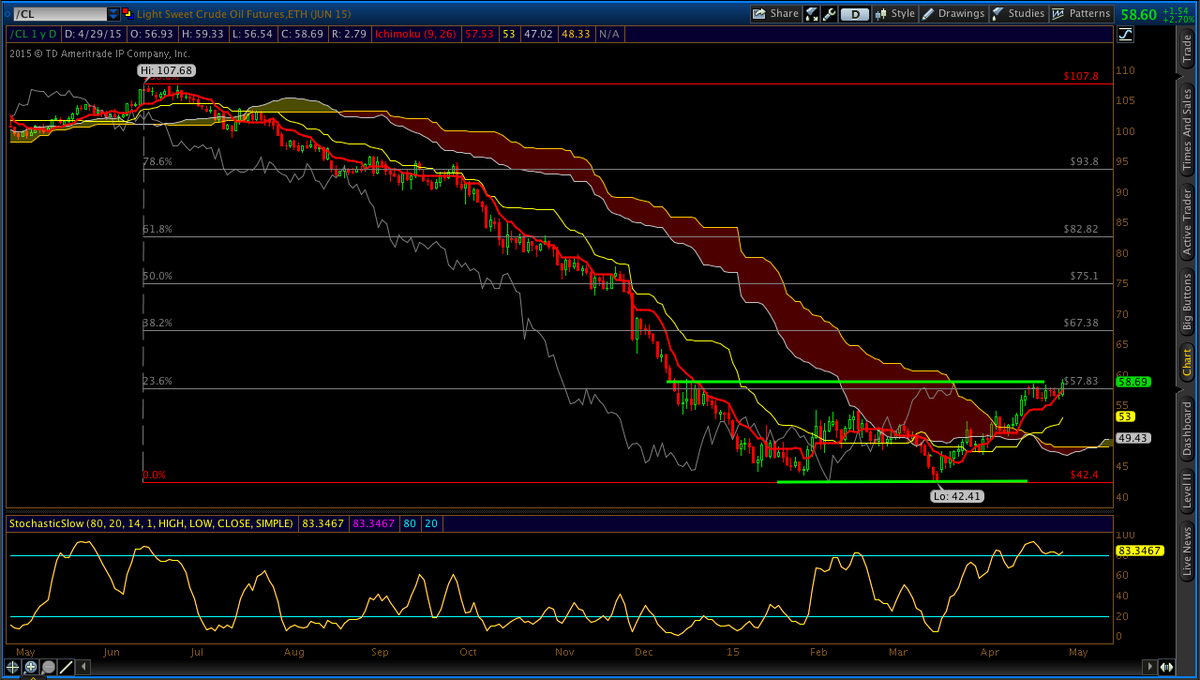 The bullishness case for Oil was summarized in Crude cuts keep coming: .

Speaking of the Baker Hughes report, 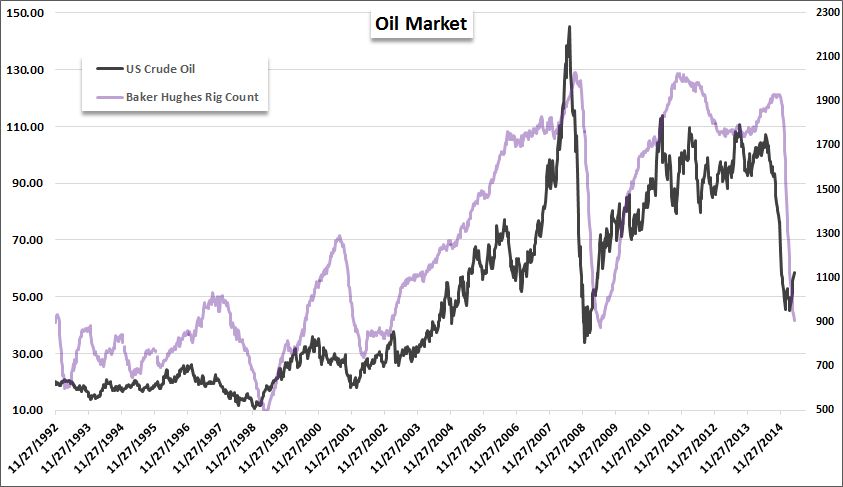 And speaking of Saudi Arabia,

But what about natural gas? 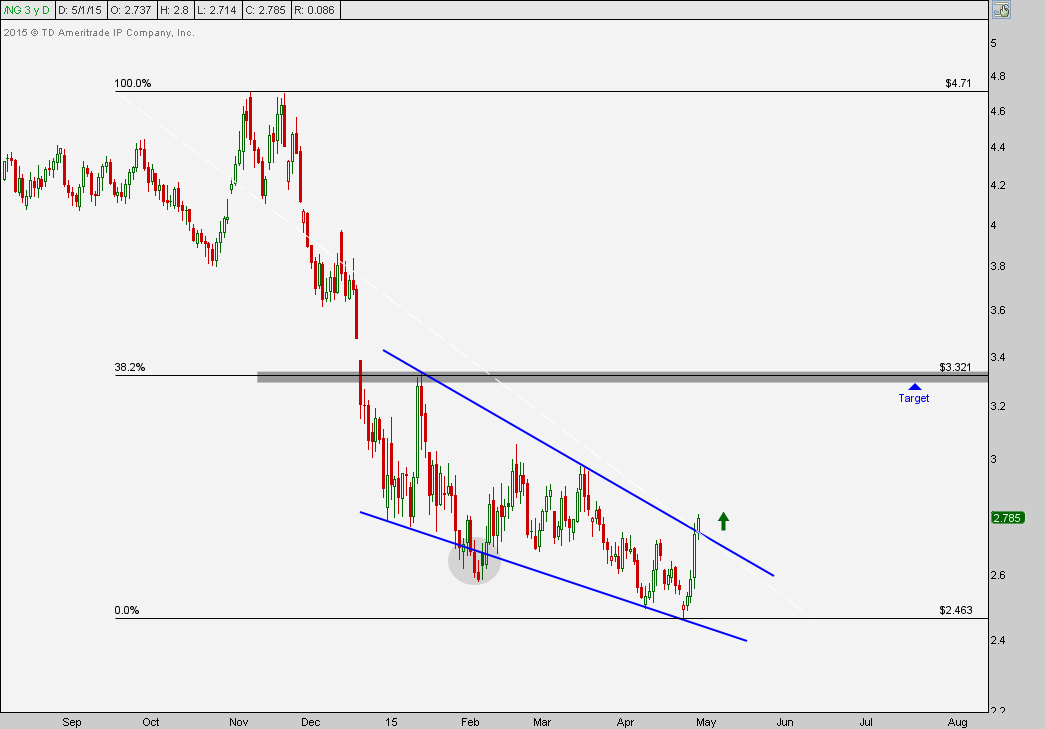 But a suggestion of caution:

Nothing acts as ugly as Gold. Dollar up, Dollar down, Gold just gets trashed. Is it about to be shot now?

The worst sign for a market is when it can’t rally on good news. April was a dream month for the gold bulls.

Even with all those tailwinds, gold couldn’t make any headway. Repeated tests of $1220 failed and after the Fed restated its optimistic outlook, gold prices took a $40 tumble. On Friday the April low of $1175 gave way in a quick move down to $1170. … That leave little support on the chart until the March low of $1144

May is the worst month for gold — on average — over the past decade. Prices average a 1.1% drop. The past four years have been especially dire, with prices averaging a 4.33% decline. … It’s not just may, the May-June period is the worst two month period on the calendar

All this technical & seasonal. What about a fundamental reason? The Oil Slump Is Emptying the Stores of Dubai, according to Bloomberg.

But is all this negativity a sign of a rally according to: 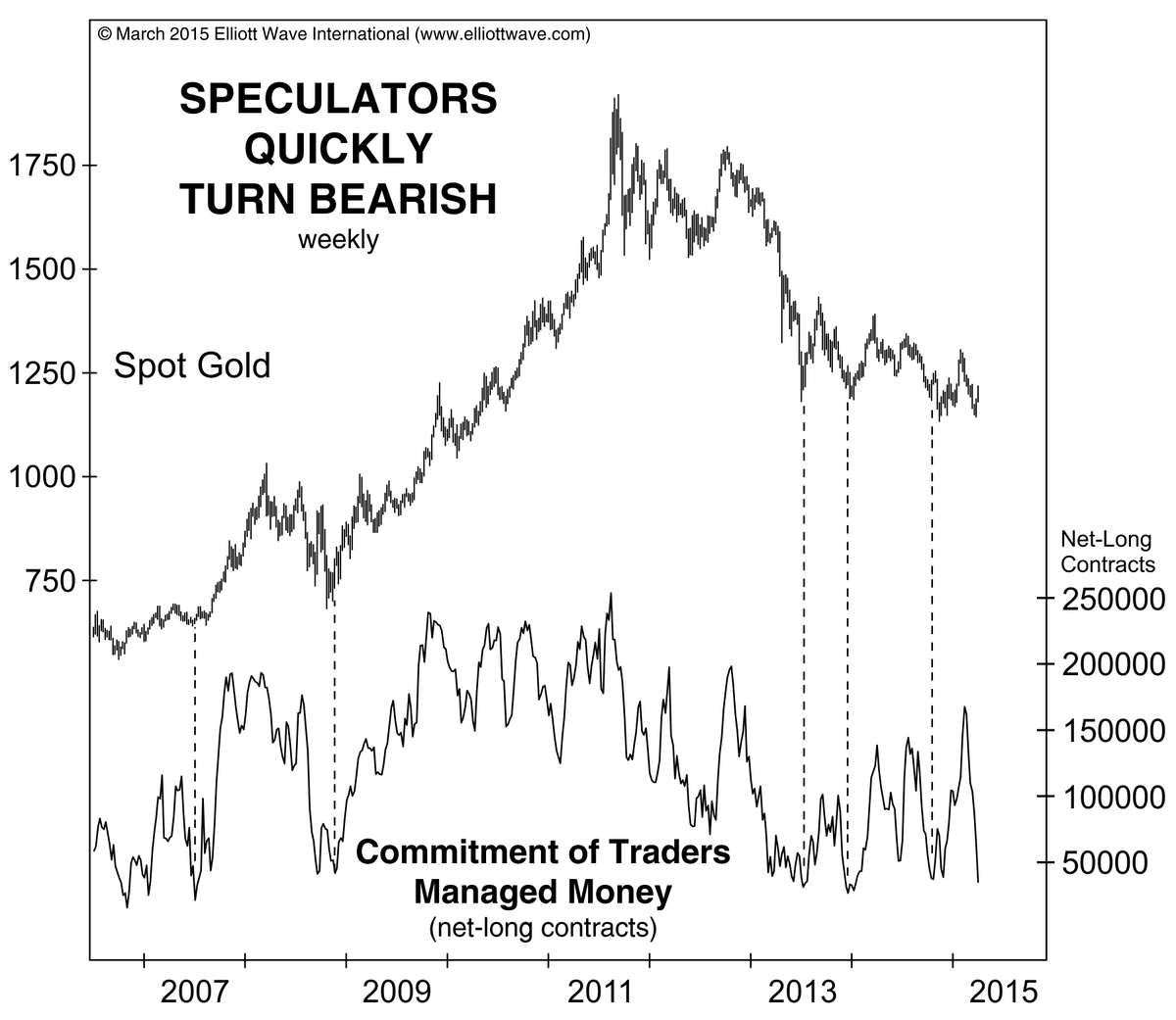 Given that Sunday is coming up: