Those who remember Cramer’s tirade in the fall of 2007 should remember that Cramer might have been late to that protest but he was indeed correct to protest. So is Cramer correct about what’s happening to the US economy today? He himself doesn’t know and, like all of us, he is waiting for yet another month’s payroll number to resolve our “What gives?” question about the US economy. After all, it is the only piece of data that remains strong. The rest are bad like Q1 GDP of -0.7% and the stunningly bad Chicago Fed that was:

Apart from going one-up on old GE, the importance of this Chicago Fed number is: 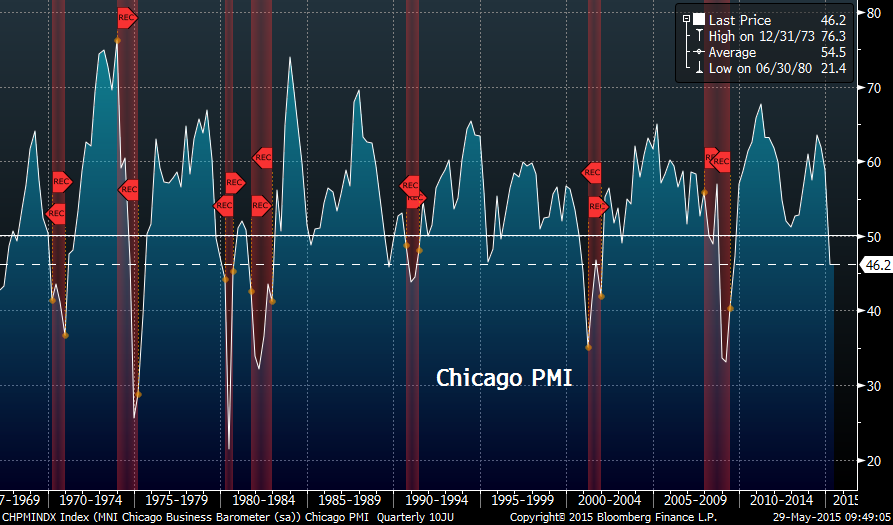 And what should happen if such conditions are possibly upon us? What has happened over the past two weeks: 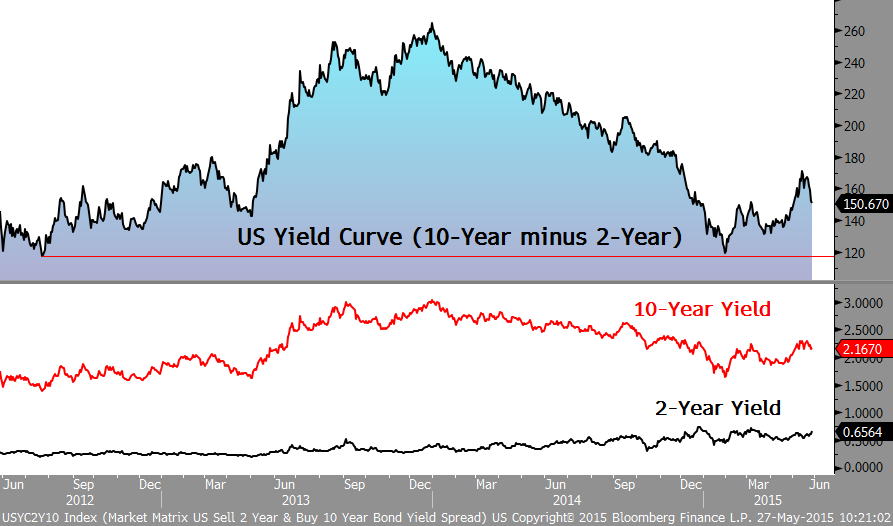 We remember the day of the 30-year auction in June 2007 and its aftermath very vividly. As we wrote two weeks ago, the bad 30-year auction of Thursday, May 14, 2015 resembled that June 2007 auction. And its aftermath seems to be following the 2007 precedent – the 30-year yield is down 19 bps from the pre-auction Wednesday (5/13/2015) to this Friday; the 10-year yield is down 16 bps & the 5-year yield down 7.5 bps. The 30-5 year curve has flattened by 12 bps from 151 bps to 139 bps. So has the inexorable steepening trend of 2015 now reversed? Are we back in the inexorable flattening trend of 2014 with the long end warning the Fed of risks of tightening? The bond market may be bigger and more correct in its messages, but it can’t deliver a message like Cramer did on Friday – by bringing in the proverbial ghost of Trichet.

What about inflation, you ask? 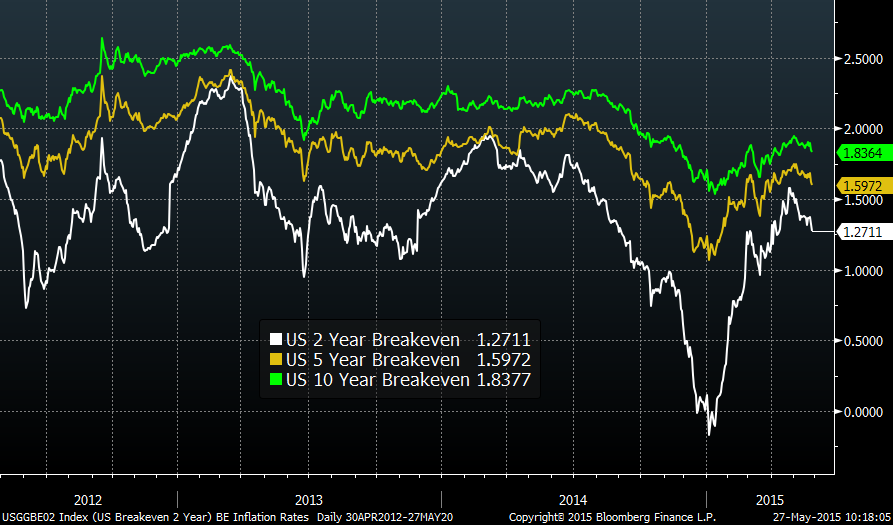 It is very simple but very frustrating:

Chair Yellen is trying hard to send a hawkish signal to prevent stocks going to the moon. That makes sense unless she turns into a Bernanke who waited too long in 2007 to ease & then found he could not reverse the slowdown. If that happens, then Cramer will have to rant even louder & with more emotion than he did in 2007.

Let’s see what next Friday brings.

Last week, we highlighted tweets of J.C. Parets about Treasury yields. He proved correct this week and raised his conviction level:

The rally of the past two weeks and the looming trend line persuaded the ACG-Bear Traps team to recommend selling 1/3rd of the TLT position they had added in early May. They think TLT has further to go but discretion being better part of valor seems to the message.

This week, the VIX index rallied by 10% from utter complacency to a high complacency level of 13.84. That did coincide with a 1% decline in Dow and S&P. But is that positive for next week?

That seems to be the message of the following chart from S&P 500 Valuations Still Lofty Per Sales, Earnings, And PE Multiples. 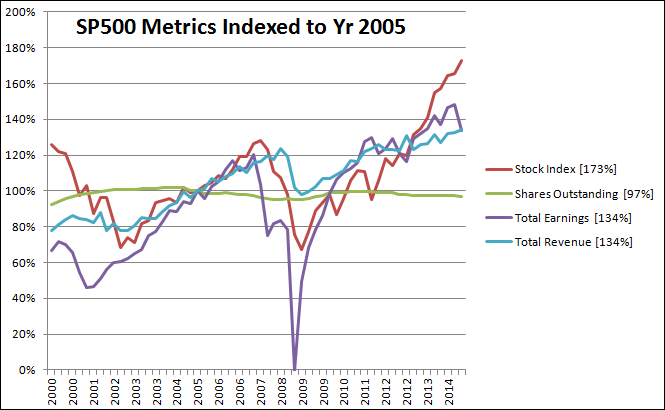 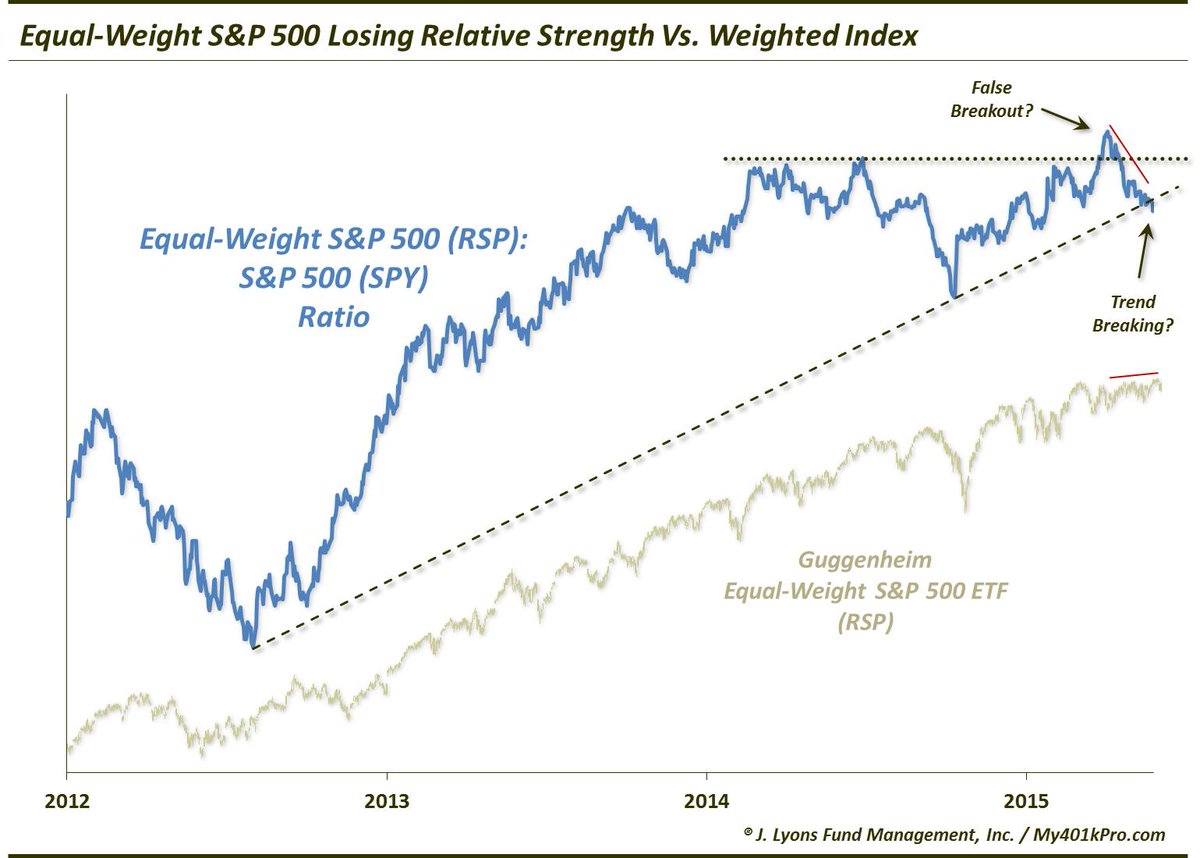 Lyons explained further in his article: 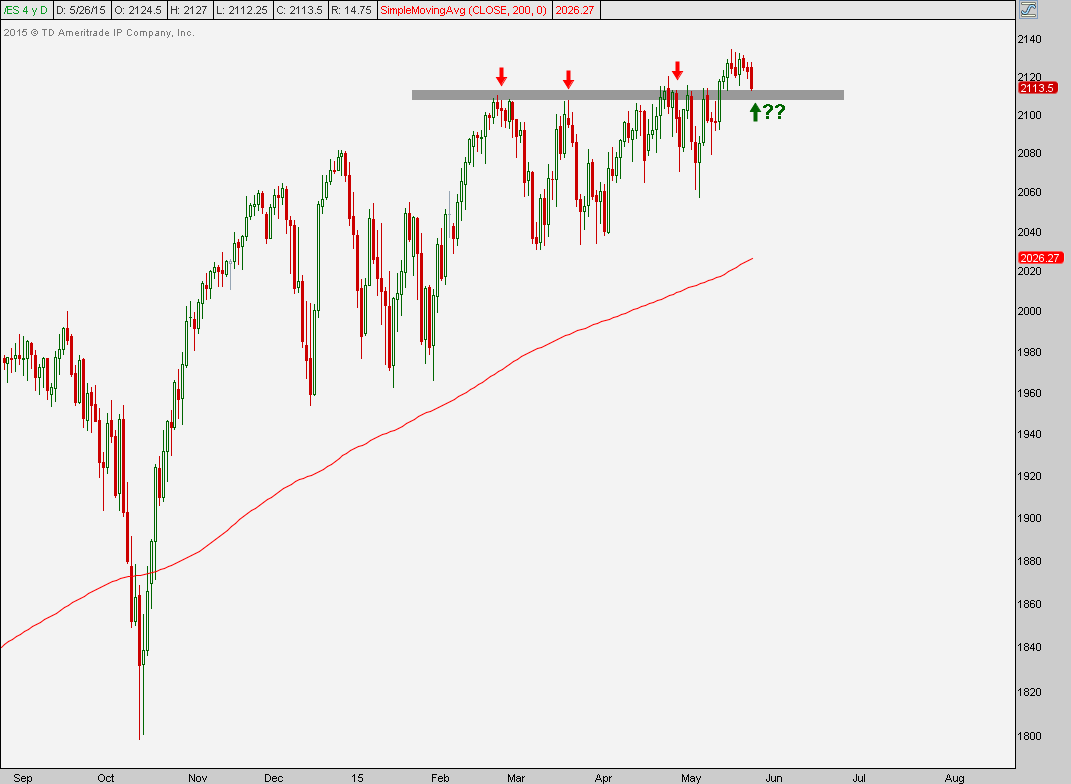 Then there are those who have conviction: 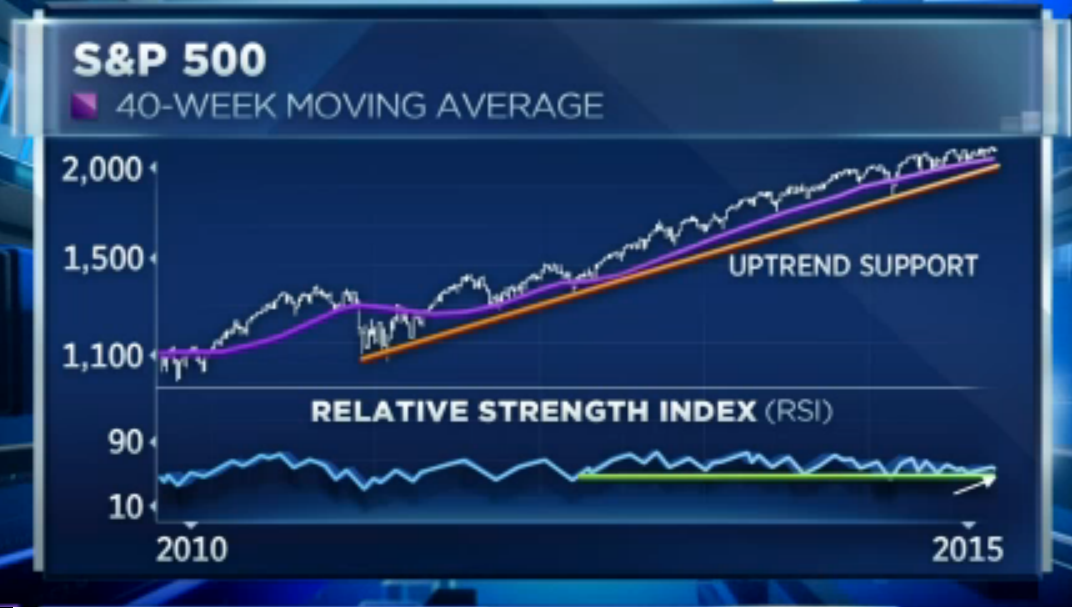 Finally, a word from a fundamental guy who has been right far more than he has been wrong during this bull market – Jim Paulsen of Wells Capital Management used the two words in his conversation with CNBC’s Brian Sullivan on Tuesday:

The Dollar was up by about 90 bps this week and Gold was down by 1.3% with Silver down 2.2%. One trader is not taken in by Gold’s allure.

On the other hand, Chris Gersch of Bell Curve Capital said on BTV Market Makers that this is a great time to buy Gold. He says going back last 6 months, the 1180 level has been a great place to buy from. But he did say on Wednesday that Gold will close the week above $1,200 which it did not.

We wonder what happens when it becomes abundantly clear that Chair Yellen will not raise rates in 2015. If that doesn’t create a rally in Gold, is there anything that can?

Since Dollar rallied this week, Oil should have fallen. And it did until Friday. Both USO & BNO were up 4% on Friday. Warum? Was it the drop of 13 in the oil rig count? Or was it Saudi Arabia travelling the road to NonPakistan? ISIS managed to set off its 2nd bomb in a Shiite mosque in Saudi Arabia killing innocent civilians. ISIS doing what it wants in Syria and Sunni Iraq is horrible but that doesn’t move oil. Virtually all of the large Saudi oil fields are located in Shiite majority section of Saudi Arabia. That area becoming the center of NonPakistan-like Shia killings cannot but be positive for oil. Add to that worries about Saudi Arabia getting badly bogged down in Yemen.

Saudi Arabia has maintained that Iran poses greater risk than ISIS just as NonPak has maintained for decades that India poses a greater risk than Talebani terrorists. Now there are reports that ISIS has established a partnership with the Hekmatyar group in Afghanistan. No one is more experienced in insurgency-terrorism than Gulbuddin (body like a rose?) Hekmatyar who was a major ally of US-CIA in the 1980s against the Soviet army occupying Afghanistan. Then Hekmatyar was a major player in the Afghan civil war that killed 50,000 in Kabul alone. After Taleban’s victory, Hekmatyar participated in the Nagorno-Karabakh conflict between Azerbaijan & Armenia. Now he is back opposing the Taleban by allying himself with ISIS?

That won’t change the minds of NonPak Generals just as ISIS-sponsored terrorism inside Saudi Arabia will not change the minds of Saudi rulers who hate Iran more passionately than anything else. Saudi Arabia & NonPakistan have been allies for decades. Now their terrorist enemies are also becoming allies. That cannot but be positive for oil for the intermediate term. And in the short term, we have next week’s OPEC meeting in Vienna.