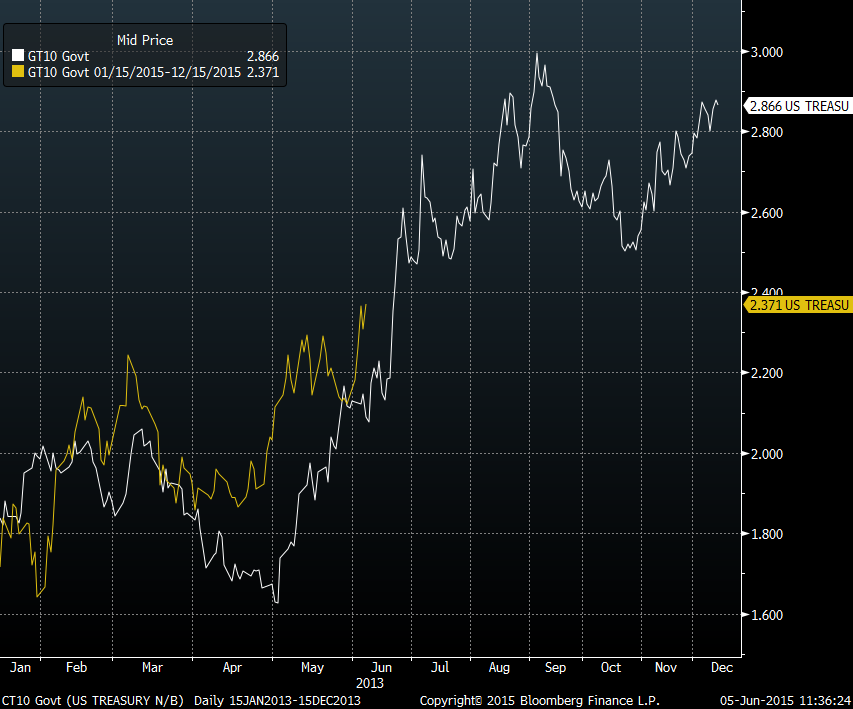 The chart illustrates the damage that can be done to interest rates in the next few months if Chair Yellen keeps up this will-they-won’t-they game. Remember the various Bernanke comments in 2013? Remember the incessant attempts to not surprise the bond markets, the incessant attempts to manage the reaction of the bond market? Remember how it made the bond selloff much worse than what it would have otherwise been?

Doesn’t Chair Yellen recall that interest rates stabilized and went down when she finally announced the Taper in 2013? Was that because the bond market got certainty or was that because the insane babbling of the Bernanke Fed had taken long rates much higher than they would have otherwise gone?

Dr. Yellen, you got a gift this Friday. Use it. Raise rates by 25 bps on June 17 and state clearly that only one additional rate hike will be considered if necessary in 2015. That will cool down the bond market and limit the damage to the economy.

Jeff Gundlach, Jim Bianco & Rick Santelli all said “No” when asked whether they thought the Fed would raise interest rates in 2015. But that was Thursday, a day before the stunning 280,000 jobs number on Friday. But would that number move the Fed to tighten in September? The Fed-Whisperer Jon Hilsenrath wrote no in his article on Friday.

The catalyst for the downdraft in yield in March 2015 was the dovish FOMC statement on Wednesday, March 16. Will that pattern repeat on Wednesday, June 17th or will the Yellen Fed affirm a tightening in 2015? We ask because we can virtually guarantee they will not raise the Fed Funds rate on June 17.

The will-they-won’t-they drama got more interesting with the IMF head Lagarde publicly asking the Fed to not raise rates until mid-2016. Their excuse was their downgrade of the 2015 U.S. GDP growth to 2.5% from 3%. This stupidity virtually guaranteed a statement from the Fed to the contrary. Was the Fed going to accept that the IMF knows more about the U.S. economy than the Fed? Was the Fed going to allow another body, a non-American body, to tell the Fed what to do with US monetary policy? Of course, not. No wonder Bill Dudley took Friday’s payroll number to state almost categorically “Fed still likely to start raising rates this year“.  Take that, Ms. Lagarde.

That enabled Mohamed El-Erian to take a victory lap on Friday on BTV and restate that “most likely outcome is a September hike“. That is if the data keeps coming in strong and the next payroll number doesn’t nosedive as the number in April 2015 did.

Another reason for the Fed to hike on Wednesday, June 17.

Is the problem with ADP then? 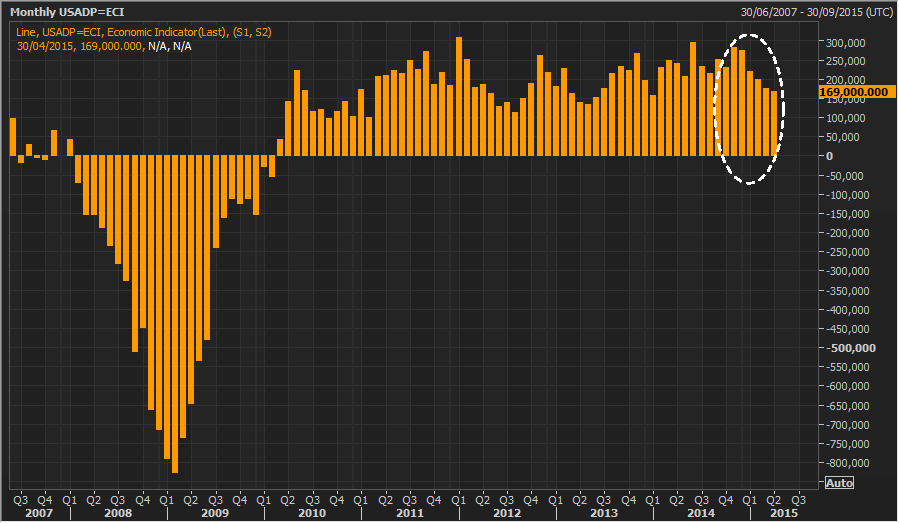 Raoul Pal of The Global Macro Investor went so far away from David Rosenberg as to use the “R” word on Thursday on CNBC FM:

And a couple of Fed heads including Dr. Brainard & Dr. Tarullo spoke of a weaker economy this week. And, as we quoted last week, Jim Cramer said the Fed should be cutting interest rates not talking about hiking them.

These are all smart people but, frankly, the weight of the evidence goes to the strength camp thanks to the NFP number on Friday, unless or until that is revised downwards next month. In fact, James Paulsen of Wells Capital went further on Friday on CNBC and said:

This spread fell viciously on Friday with a 10-bps spike in the Us 10-yr yield. So will we now see a race between which yield rises faster – the 10-yr Bund or UST? In one way, Draghi does seem to be ahead in his race with Yellen:

Is there a linkage with the Dollar?

The rise in Treasury yields may be one of those rare times when positioning is not the major factor;

And they got mighty squeezed in mid-June in 2006. Will Chair Yellen be the catalyst on June 17th?

Jeremy Siegel seems sort of in our camp with this comment on CNBC Squawk Box – “anticipation of rates rise is worse than the actual act of raising rates“. Assuming the Fed raises rates in September, Siegel stated – “If they go in September, I think the fourth Quarter might be the very best quarter for stocks this entire year“.

This sentiment was also expressed on Monday by Savita Subramanian of BAC-Merill Lynch on CNBC FM 1/2:

The first week of June is seasonally a strong week. That did not hold this year. But what about the month? A detailed treatment was featured in Ryan Detrick’s article on Tuesday:

What about the near-term? 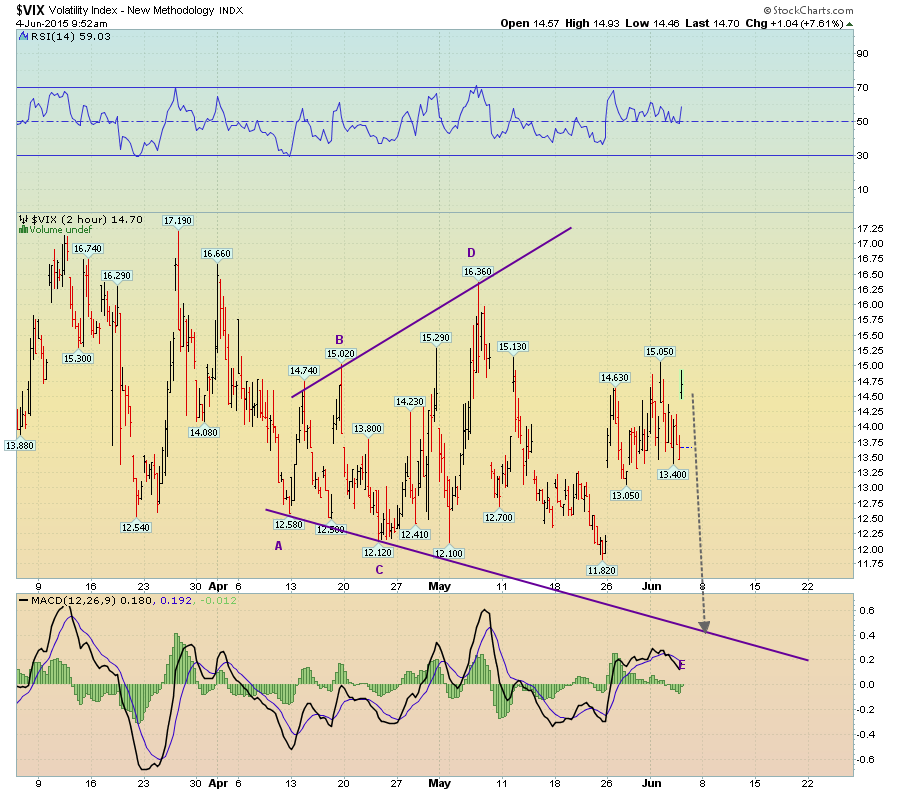 The US stock market has lagged behind many overseas markets. Will the S&P catch up in the second half? That depends on, as Andrew Thrasher writes, whether traders are leaving international markets in favor of the U.S.?

The Rig count fell on Friday afternoon. Was that what led to Oil rallying on Friday afternoon? Because Oil, which was supposed to fall when OPEC refused to cut production, actually rallied. Or was it because, as T. Boone Pickens said on CNBC Squawk Box on Thursday, that Saudis are bluffing on oil production.

That is why Pickens says Oil will rise to $70 by the end of the year. On the other hand, Goldman’s Jeff Currie stated his target on CNBC FM as $45 by October and $50 by year-end.

As we recall, CNBC’s Joe Kernen was upset when we began using TACs instead of Videoclips in the title to these articles. Our basic point was that expert commentary on Twitter was becoming more useful than long FinTV segments with “expert” guests. He seemed to take it personally and expressed his displeasure on Squawk Box. This week Joe Kernen reversed himself and, on air, displayed a chart that he saw on Twitter and acknowledged that Twitter adds value. Kudos, Joe.

Actually, it is today’s Fed-ECB-created market environment that is the trigger for brevity. There is really no scope for broad macro analysis if everything comes down to what Fed-ECB do and when. So we either have to be like those 1970s Kremlinologists whose work consisted to watching tiny signs of behavior or focus on technical charts in the hope that they might reveal something.  That is not where FinTV excels.

But not to worry. Sooner or later, Fed-ECB will act to tighten and then FinTV will have something to discuss at length.

We know bears, lions, wolves & dogs. But we had never seen anything like the Himalayan dog below: