1. It’s All About Greece

But that doesn’t make it easy. 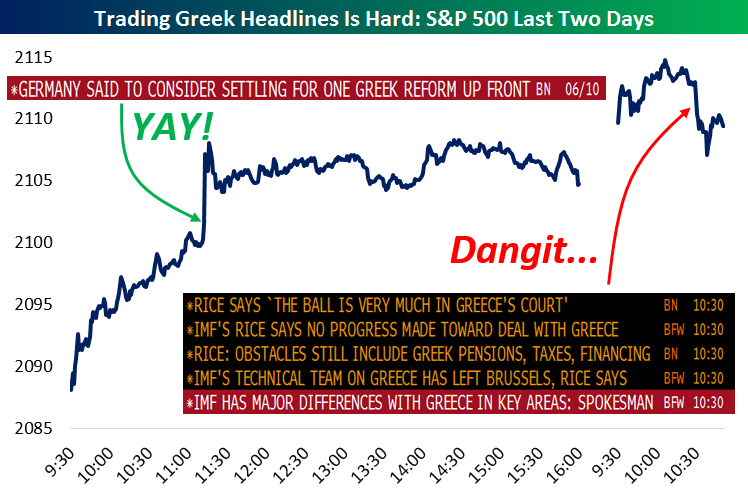 This “Dangit” reaction became worse on Friday with the Dow closing down 140 points.

The action in Treasuries is also governed by the action in German Bunds. Treasury fell on Friday morning despite a hotter PPI. They were simply following the lead of German Bund yields which were falling hard. German 30-yr & 10-yr yields closed down 5 bps on Friday. Come Friday afternoon, Treasury yields began rising from their lows of the morning and actually closed up on Friday. 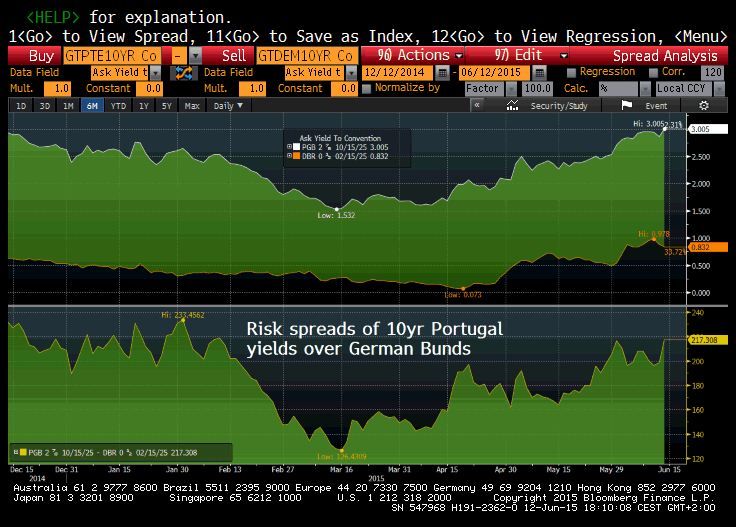 The battle is not about Greece but about peripheral Europe. Who wins in that battle between Greece consequences & Draghi-QE?

It seems a majority of Greek people want to accept the deal offered by the creditors because they are tired & they want to stay in the Europe. But a third won’t accept it. The key is that this third is who put Greek Prime Minister Tsipras and his Syriza party in power. There is no future for Tsipiras & Syriza if they accept this deal from Europe. So they may have nothing to lose. It may also be about respect. Germans & Europe have treated Greeks as semi-beggers who can’t afford to choose.  How real is the 24-hour deadline that has already passed? We will know next week.

Everyone seems to have figured out that the end of the Greece-EU relationship is not that big a deal. What if the IMF is wrong and Germany is about to screw up badly again? 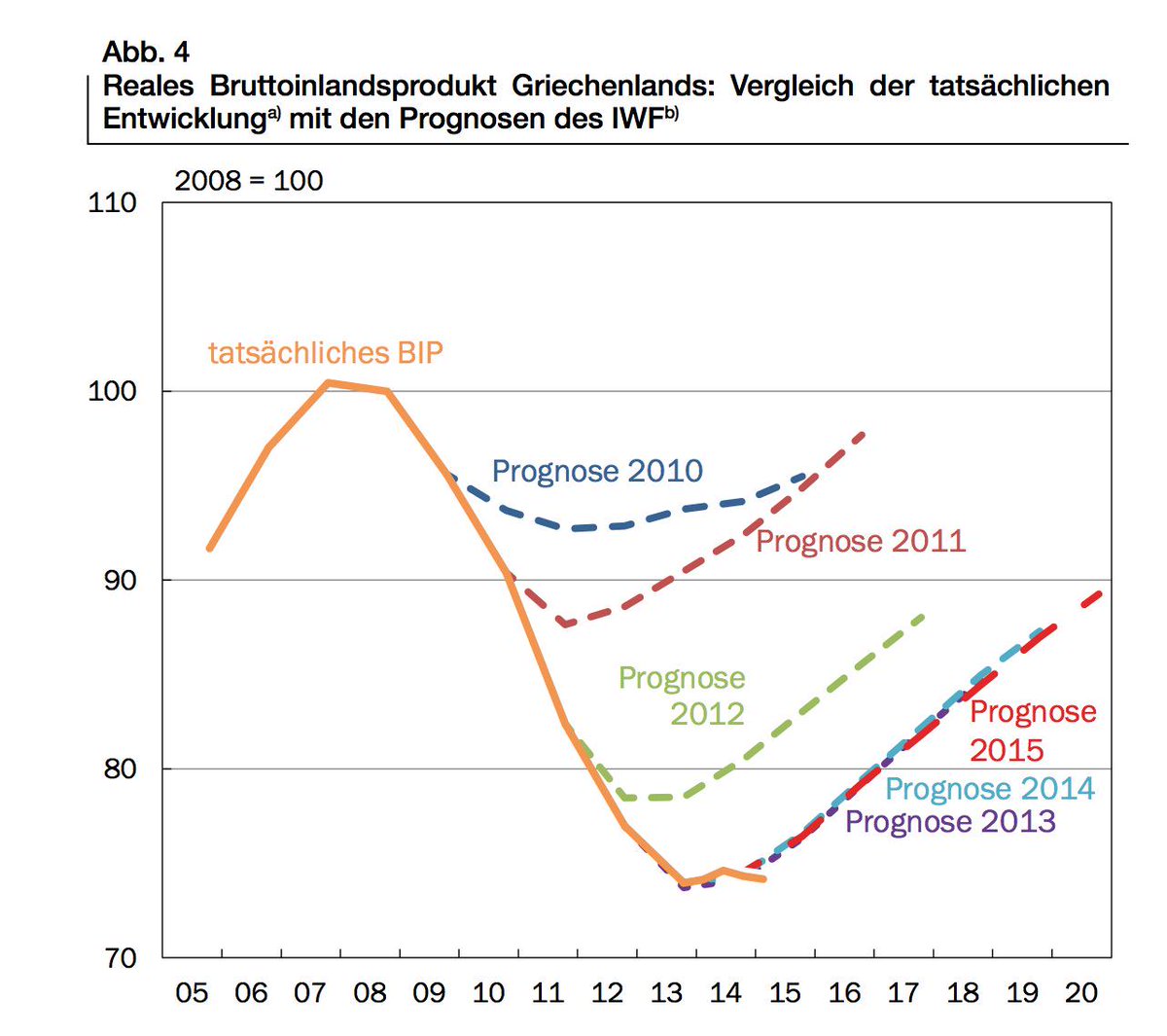 Last week, we urged Chair Yellen to take advantage of the 280,000 NFP number and raise rates by 25 bps on Wednesday, June 17. This week we argue that such a rate rise may be the kick Germany-Europe need to decide on a cease-fire with Greece with enough money to tide it over for some months. Because Draghi & Merkel both know Europe cannot handle the twin problems of Greece collapse & Fed hiking rates.

Look at what is happening already in advance of Yellen’s expected hawkish stance next Wednesday: 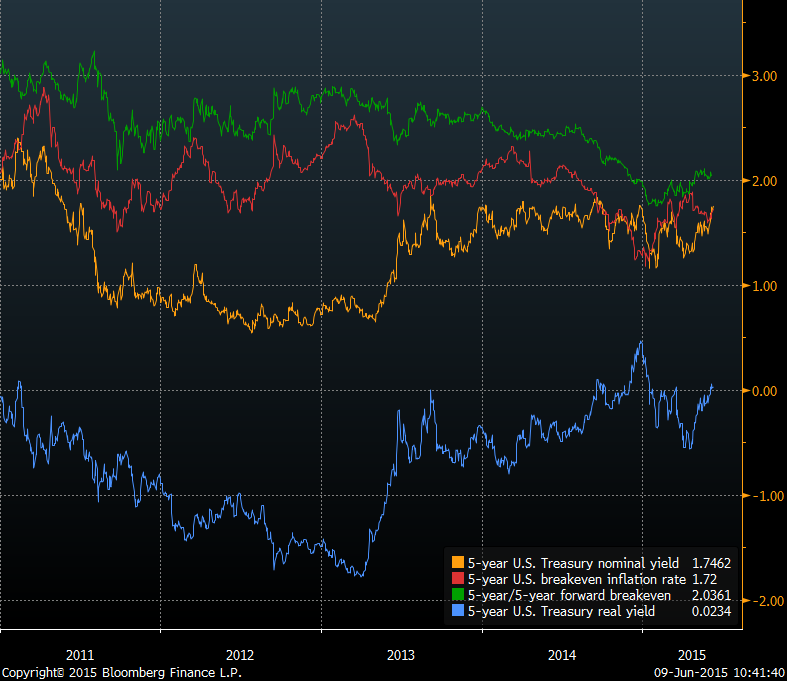 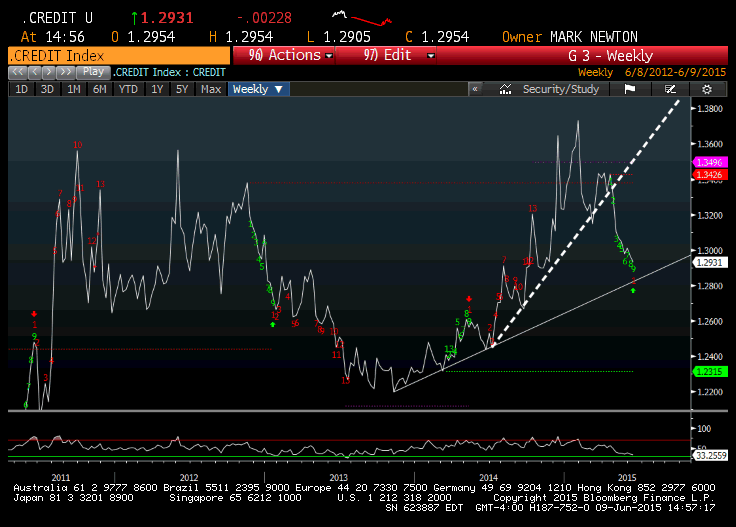 So the markets are prepped and the stage is set for Chair Yellen to raise rates by 25 bps next week and promise no more hikes for the rest of 2015.  Do we think she will? No. Will she at least sound dovish? We doubt it unless the stock market falls out of bed before the FOMC meeting on Wednesday. Our fear is that she may use her megaphone to sound more hawkish than she really is and that might create unnecessary turmoil. 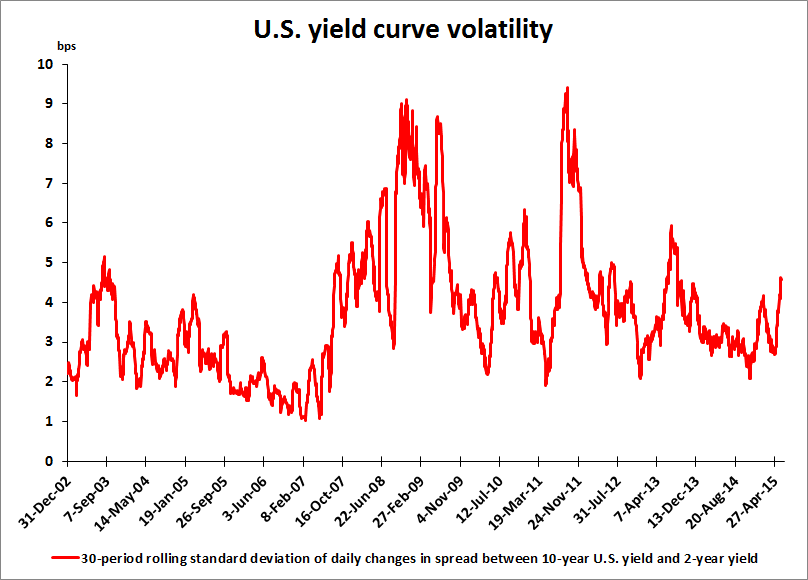 The story in stocks is so different. The VIX fell below 13 again this week. 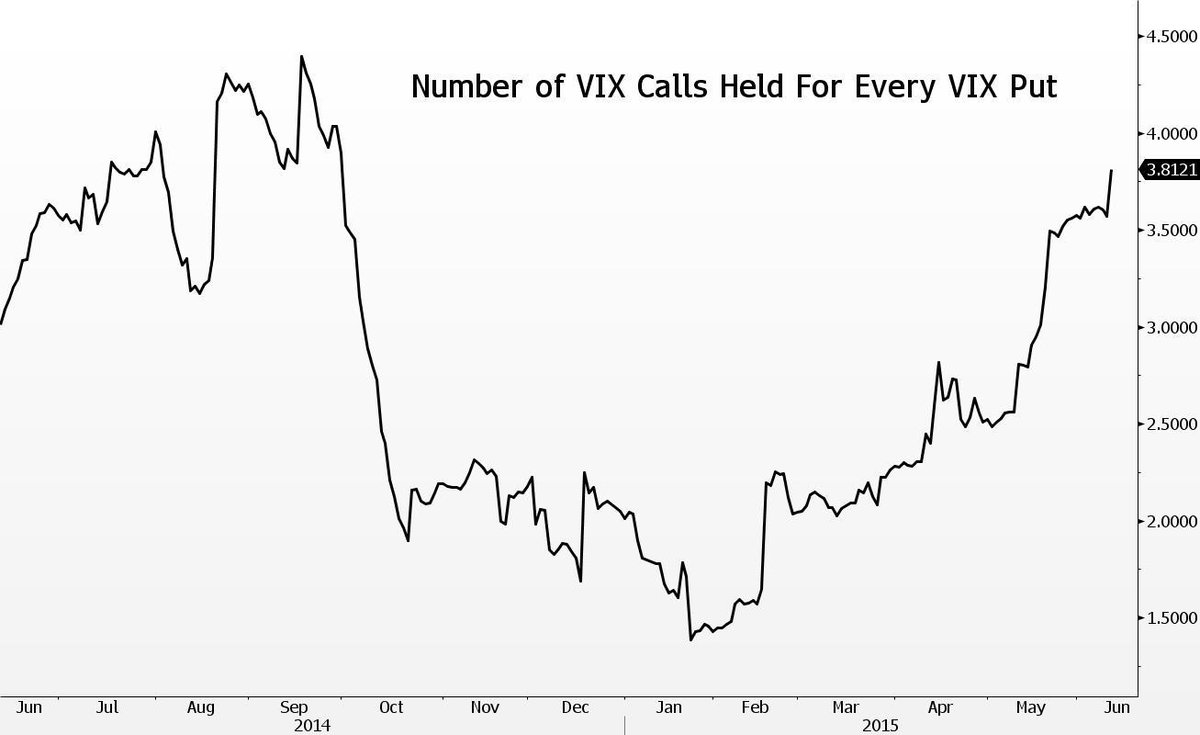 Unless Chair Yellen does something completely  unexpected, Treasury yields should remain joined at the hip with Bund yields. And Bund yields should be tied to the drama being played in Athens-Brussels-Frankfurt. But for Greece, we would have argued that June is, in our experience, the month that reverses the direction of yield movement of April-May. So this week’s action should, playing percentages, lead to a rally in Treasury prices.

Barring a sudden surrender from Greece or a sensible pragmatic offer from Merkel, the Greece uncertainty should remain elevated. That should be positive for German Bunds & for Treasuries. Remember the call from ACG Analytics on Friday, May 28 to sell a portion of TLT or long duration Treasuries? That turned to be a superb call. ACG did it again with a call to buy TLT or long-duration Treasuries on Wednesday after the close. What a perfectly timed call? Kudos to ACG.

J.C.Parets kept tweeting his positive stance towards TLT all week: 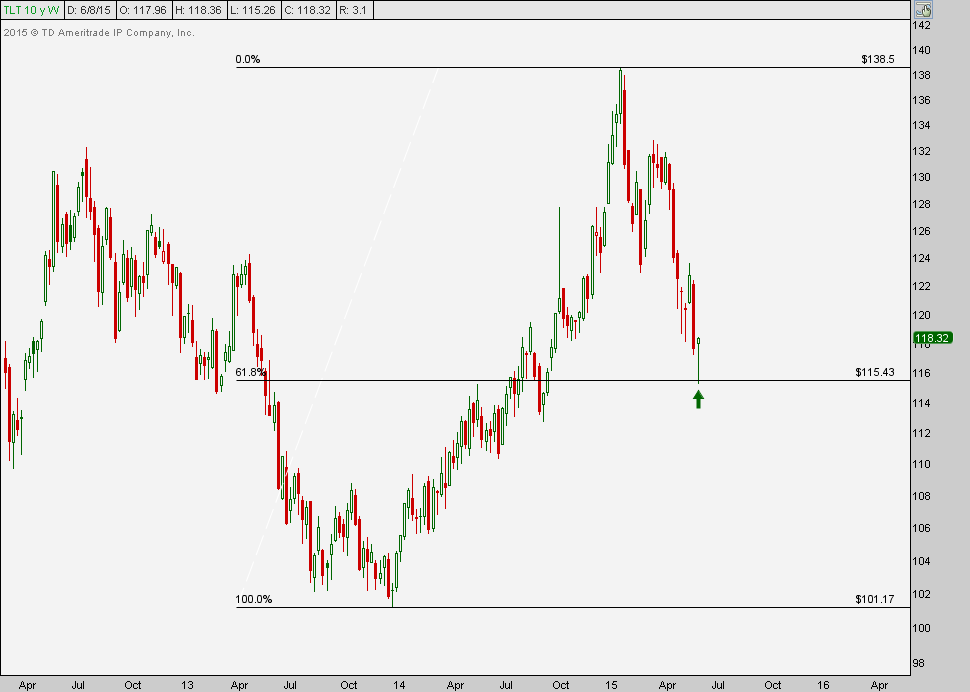 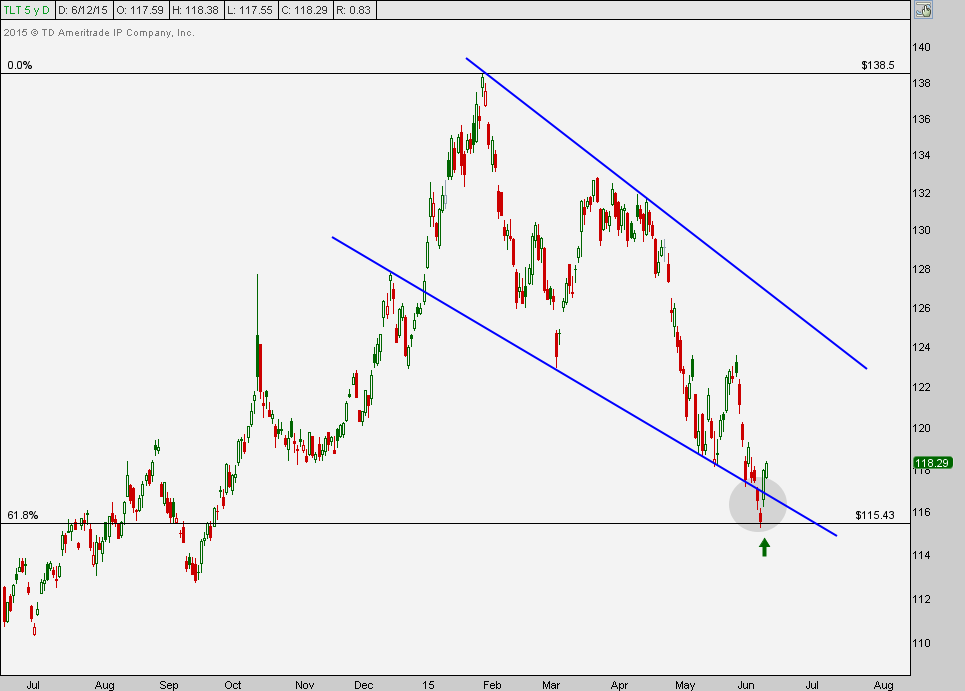 On the other hand, Market Anthropology wrote this week:

Waiting for volatility to spike has been like waiting for Godot. For weeks, we have been featuring comments about imminent breakout of the S&P trading range. Most commentators have played safe by pretending to not have an opinion about the direction of the break. But it is possible to see a downside bias in their public indecision. That is what makes the next call interesting & potentially rewarding:

His article provides a detailed discussion with several charts to support his argument. His conclusion:

Sorry to be consistent & boring, but is Oil also linked to Greece? Surely, oil is about production from Saudi Arabia, Rig Count in America & demand from India-China. Well, not really & not in the immediate term as Friday’s Greece exasperations roil oil article points out: We have been meaning to give a shout out to the new Wall Street Week. Any one who has not watched the two Carl Icahn interviews should do so right away. Kudos to Fox Business Network to get and broadcast this weekly show. We dare say, at least so far, that this new WSW is more useful than the classic WSW. Kudos to Anthony Scaramucci & Gary Kaminsky.

8. The Tune from Greece

After so much ado about Greece, how could we not include the Greek tune?