Our nom de plume is CinemaRasik. Rasik is an amalgam of Aficionado & Connoisseur – one who revels in the Ras or essence. We have long marveled at the ability of Cinema to tell stories and convey deep messages within the story as well as show a completely different view of a story than most people tend to see with their eyes. That is why we go to the movies, we want to be engulfed with what’s on the screen, we want to feel something and take bits of it away with us. Film companies like https://racinggreenpictures.com/ know this and want to help those who have a story to tell so we can talk about it on blogs like this. This Blog began with reviews of a few Bollywood adaptations that were better than the Hollywood inspirations. Over time, our passion for global issues took over and the Blog was renamed Macro Viewpoints.

But today we are absolutely delighted to get back to Cinema, to write about an absolute must watch film which, besides its eternal story & stupendous visual magnificence, carries a deeply subliminal yearning that is at the core of Indian minds & hearts.

The film we are so rapturous about is Baahubali, a film from veteran South Indian director Rajamouli, a film in Telugu, a language we cannot read, write or understand. But this film is beyond language and the English sub-titles do a great job.

If there is an Indian movie that you should watch regardless of your nationality, ethnic origin, race, religion, language, this is it. And this will be the first in a series of glorious & epic stories that will be brought to the silver screen by Indian talent.

First, a couple of reviews of Baahubali (strong-armed one):

Below is a Release Week preview in English with different video:

The child found in the river is given the name Shivudu by the mother who adopts it. Shivudu is the respectful or reverent variation of Shiv, Bhagvaan Shiv (or Shiva with soft a). Remember the child is a prince destined to wrest his kingdom & rescue his people from a brutal tyrant. Every major freedom movement in India, especially a movement based on a Just War, has been launched in the name of Bhagvaan Shiv. And worship of Bhagvaan Shiv is a deep tradition in South India.

Hence the name Shivudu for the child destined to greatness.

The First Manifestation of Shiv in Shivudu

When does the young man realize the greatness inside him? When does he breakout from being a fun loving young man into a seeker of greatness? When do his mother & others see in him a man blessed by Bhagvaan Shiv? In the scene below: 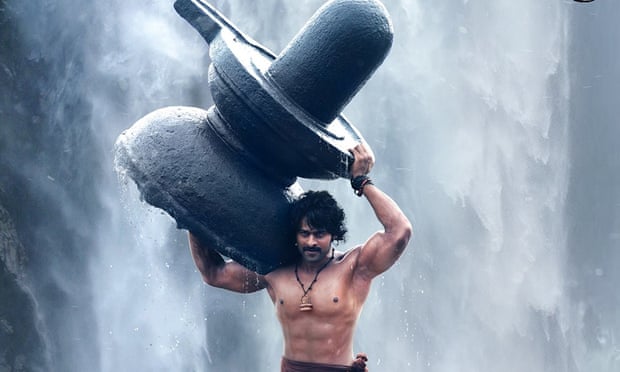 The sacred River Ganga, the mother river of all Indians, came down from heaven to earth at the request of King Bhagirath, an ancestor of Sri Ram. The earth could not stand the force of might waters of Ganga falling from heaven. So Bhagirath prayed to Bhagvaan Shiv to absorb the fall of Ganga and save the earth.

Bhagvaan Shiv stood at the peak of Mount Kailash in the Himalyan range and the waters of the Ganga fell from heaven on his head and flowed into the mountain through his massive locks of hair. This is why devotees worship Bhagvaan Shiv by pouring water over the Shiv-Lingam, the symbol of Shiv on earth.

The mother of Shivudu decides to begin this worship by bringing a pot of river water and pouring it in the Shiv-Lingam 1,000 times. She gets tired and asks Shivudu to help. But only the devotee is allowed to complete the vrat or worship. So Shivudu cannot help. But he cannot see the suffering of his mother.

So he uproots the two ton Shiv-Lingam from its base, puts it on his shoulder, carries it to the river and places it in the river. Then he calls out to his mother and says now the river will pour water over the Shiv-Lingam for ever.

Shivudu reverses the tale of the Ganga and carries the Shiv-Lingam to the river instead of the river coming to Bhagvaan Shiv. The priest tells the people that such a transformational act can only happen with the blessing of Bhagvaan Shiv and by someone blessed by Bhagvaan Shiv. Read the English translation of the wonderment of the villagers:

The musical score for this scene is simply perfect with 3 verses in Sanskrut in the praise of Bhagvaan Shiv and 1 verse in Telugu about the wonderment of the villagers in Telugu. The Sanskrut verses are excerpts from the Shiv Tandav Stotram composed at the beginning of known time by King Raavan from the epic Ramaayan. (see Shivuni Aana Lyrics for a rough translation)

Below the audio in the Telugu original. Listen to it and hear the power in the Sanskrut verses and the tone of wonderment in the 1 Telugu verse repeated twice:

Below is the same score in the Hindi dubbed version. The Sanskrut verses are the same but the Telugu verses of wonderment have been replaced by personal praise for the young man:

Who is this one, who is this one, where did he come from? His luminance spreads in all 4 directions, his massive arms, Bhaagirathi (Ganga) look Bhagvaan Shiv is himself coming to you; Look at this picturesque illusion

Baahubali is a breakout film on many levels. First it is the most expensive film made in India. Secondly, it has grossed the highest ticket sales for its Hindi dubbed version than any other film dubbed in Hindi. The success of Baahubali has sent tremors in the heart of Bollywood.

Baahubali, unlike Bollywood films, is a purely Indian, an all-Indian film. Bollywood, on the other hand, cannot break away from its Iranian-Afghan roots. Like North India which was under Muslim invader subjugation for over 700 years, Bollywood & its language remains Muslim-servile in its heart. In contrast, Baahubali is steeped in Sanskrut and is wholly Indian. In fact, the film makes fun of an Afghan warrior-tradesman who comes to sell a mighty sword names Sikandar (Bollywood-Iranian for Alexander).

Baahubali is the first film to tell a great Indian story to a global audience on the scale of Cecil de Mille. It could be made because the global Indian diaspora & India itself is now prosperous enough to make such a film a financial success. As Indian prosperity grows, Indians are turning back to their own great history to the vast collection of magnificent stories from the beginning of known time.

Within 10 years, we will see a series of all-Indian films made that tell great Indian stories on a visually stunning and magnificent scale. We cannot wait for that day.

In the mean time, go and watch Baahubali in your local theater today.