Update: Three days after our article, we saw the tweet below & its chart: It now shows nearly equal probability of Germany leaving the Euro as of Greece leaving the Euro. Interesting, isn’t it? 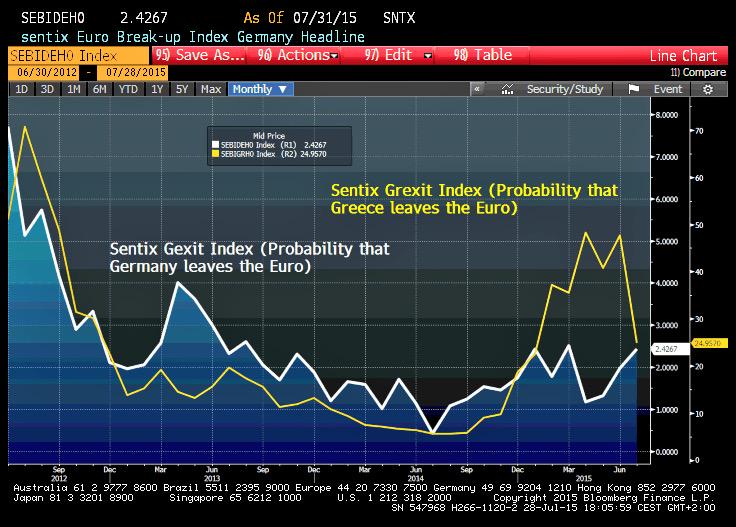 *************** The first act of the Greece-Germany play is over. Greece has capitulated to German demands and the Greek Parliament has ratified what Prime Minister Tsipras had agreed with Germany. Now the second act begins. At this stage, it is still not clear whether Greece will ever be able to begin a recovery, whether Greece will even remain in the Euro-EU or whether the crisis will spread to the rest of Southern Europe. It is also unknown whether Greece and Germany’s crisis will affect the amount of Germans that visit areas such as Crete on their vacation. Many Germans currently use services like e-mietwagenkreta as a form of car rental during their vacations, and parties from both sides will be hoping that this can continue. We are firm believers in Simplicity. There is usual a simple reality underneath the mess on the surface, a simple truth that is more important than the cacophony of complicated verbiage that is heaped on top. Today, we discuss this basic simple and profound truth that lies at the crux of the mess in Europe. This simple truth is revealed by the simple graph below:

Germany is a massive exporting machine. The ability to export its manufactured goods is an existential requirement for the German economy. The German political leadership knows this and puts all its energy & power to maintain this machine. What could be the principal impediments to the maintenance of Germany’s export machine?