Everyone understands that different people have different levels of intelligence. The quality of an individual’s intelligence goes a long way towards determining the degree of success the individual achieves in life. Everybody gets this.

The United States of America was blessed with founding fathers of vast vision and deeply rooted & balanced intelligence. That vision, that intelligence is what makes America successful to this day.

Contrast America with the continent from which America’s founding fathers came. It was the richest and strongest continent in the world. In contrast, America was just a fledgling startup. But Europe began losing the race with America almost from the start though the vast gap between them didn’t make that visible. By 1870, less than hundred years after America’s Independence in 1776, America became the largest economy on earth surpassing that of Britain, then the dominant power in the world. In less than another 100 years, it was America that rescued Europe militarily in 1945 and then rescued it financially with the Marshall Plan.

Yet Europe, still the richest region in the world, remains just like Europe of 1776 incapable of solving its problems without major destructive conflict. Today’s Europe is not at military war with itself. But it is embroiled in the same conflict – German & Germanic Europe vs. Peripheral Europe. Greece is in utter economic ruin, worse than America was in its own Great Depression. Two days from today, Greece will vote on a referendum whether to accept German domination or whether to break away from such a domination. This is not a military conflict but a financial conflict. But the consequences are just as horrific as those of a brutal military war. 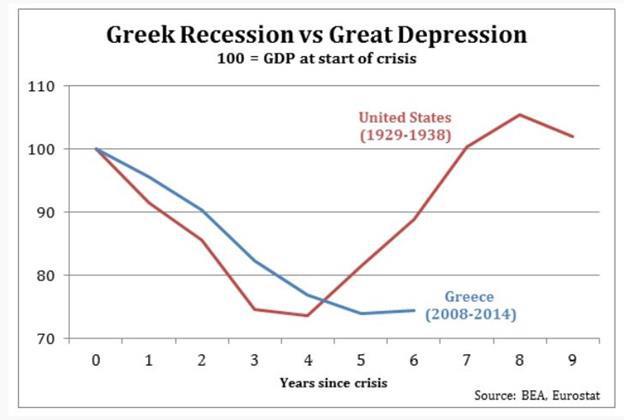 This is not restricted to Greece. Other peripheral countries like Spain, Portugal, Italy and even France have the same problems that Greece does. Europe’s problems arise from the utterly stupid structure European leaders imposed on themselves. Then they refused to take corrective steps when the problems became evident five years ago in 2010.

That is because Europe remains societally stupid.

Allow us to quote what we wrote on December 29, 2012 in our article about Civil Wars:

Remember that period? The American people, in their wisdom, returned a divided government in November 2012 – President Obama won a big victory and the House Republicans won a big victory by retaining control of the House of Representatives. The financial civil war in America continued to rage with the same intensity.

The rest of the World looked and expressed its derision about “stupid” Americans. They simply could not fathom why the two sides were fighting with such intensity and risking America going over the fiscal cliff when there was no crisis at hand. They simply could not understand how American society could engage in such high risk combat that could push American economy into a double-dip recession. After all, America had just begun to come out of the 2008 financial crisis. The rest of the World, especially Europe & China, were disgusted and sneered at “stupid Americans”.

Democrats & Republicans drafted a document that embodied the absolute no-nos for each side – military cuts that Republicans would never ever tolerate & spending cuts that Democrats would never ever tolerate. This “Sequester” was designed and approved as a warning to both sides, a warning to negotiate or else their worst fears would come true. Guess what, this Sequester became reality by default because the two sides simply could not come together in agreement about anything.

This was major – it was, along with the Tax increases of President Obama, a fiscal shock of a magnitude that had happened only 3 times since World War II, according to David Rosenberg of Gluskin Sheff.  How did it work out, this deal crafted out of what Europe & China considered to be “all-American rash stupidity”?

How did it work out? David Rosenberg answered on Bloomberg TV on May 29, 2015:

What was derided by the rest of the world as “American rashness or stupidity” once again gets proven as genius of American Society. America cuts its deficit to 2.5% of GDP and can now lower taxes in the next Administration. In contrast, Europe remains mired in a vicious debt & deficit cycle and China finds itself unable to deal with its massive debt bubble.

By the way, remember the 2008 financial crash that was supposed to end America’s dominance? The same story once again – America rolled up its sleeves and got its act together. The TARP program was passed in days by the Congress, American Banks were recapitalized and America’s banking problem was SOLVED in less than six months after the Lehman Bankruptcy. That Great Recession ended on June 30, 2009, over 6 years ago.

What did Europe & China do in these six years? European banks continued to dither and their regulators continued to act in the European way. The result? European banks remain undercapitalized and in distress. The champion of European Banking, Deutsche Bank, is in such trouble that their Co-CEOs resigned last month to avoid facing the music. And China? China did just the opposite of America. They went on a binge and built the largest credit bubble in human history. No one has a clue how messed up China’s banks are with bad debts. 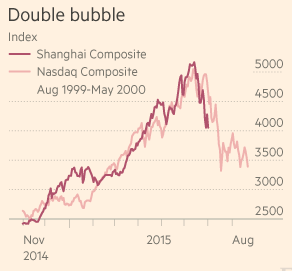 So on this 4th of July be thankful that America is still the society that the Founding Fathers designed – rash perhaps, impetuous sometimes, but still a society that recognizes problems and addresses them before they become too big to solve. In other words, an intelligent society, uniquely intelligent in a stupid world.