President Obama and Secretary Kerry accomplished something this week that had eluded American leadership for over four decades. They broke the chains that had fettered American foreign policy in the Middle East. All the noise you hear and the dust you see should not obscure you to why the deal with Iran is essentially an American deal on America’s terms.

We had used the “binding chains” metaphor in our article about the Iran deal on April 4, 2015:

Look what Stratfor wrote this week in their article What Matters in the Iranian Nuclear Deal:

There is a tremendous temptation in many circles to drag America down into a one-on-one battle in a regional or local conflict. That is what regional powers do. America, the sole global superpower, has a different imperative as we wrote in 2013:

With this deal, as we wrote on April 4, 2015, America has made Iran a HamSafar (Iranian-Urdu for fellow-traveler) on roads where their interests coincide. And that road spans the right side of the Persian Gulf and extends into Afghanistan. (Courtesy NYT – Iran, Iraq, Syria – right side of the Gulf)

But a deal like this is worthless unless Iran was precluded from building military nuclear capability for the foreseeable future. In fact, this major obstacle was why this deal took two years and patient, deliberate, determined negotiations.  The question is did USA achieve its objectives?

Read what Thomas Shea, a veteran former inspector with the IAEA, the U.N.’s atomic agency, who oversaw the design and implementation of safeguards for the world’s evolving nuclear facilities, said about the deal:

This is why, as the New York Times reported:

Our stance that this is primarily an American deal is supported by Suzanne Maloney of Brookings who wrote this week “But the credit for the breakthrough is overwhelmingly due to the American side“. And this was a truly bi-partisan effort from both this and the previous administration according to her article:

Kudos to American leadership. The chains that bound US policy in the Middle East for the past four decades were broken this week.

And then there is the scenario that was in everyone’s mind but never discussed – Every one remembers the fateful events of 1979. For years before that, the US policy in the Middle East was centered on Iran, specifically on the Shah of Iran. Then, in what seemed like a diplomatic minute, the Shah was deposed, the US policy lost its fulcrum and America was left stranded without any presence in the Middle East. Since then, the US policy has been centered on Saudi Arabia. That meant, as the cartoon in this week’s tweet sums it up, US had to carry all the load. 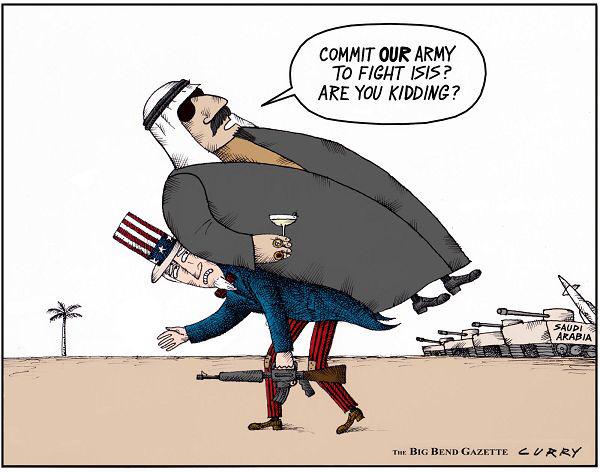 Nothing about Saudi Arabia makes one comfortable about the long term. As Richard Haass said recently on Fareed Zakaria’s show on CNN, an organization named Islamic State will not be content without taking the land that contains the two Mosques of Mecca & Medina. Imagine the tatters of US foreign policy if Saudi Arabia were to decompose while Iran remained a committed adversary. It was absolutely imperative for the US to hedge its 100% exposure to Saudi Arabia without ever appearing to say so.

With this deal, American policy in the Middle East can rest on two solid legs:

Don’t forget, today’s America is one of the largest producers of oil & gas and completely independent of the Middle Eastern energy. Today, the Middle East needs America and America has the flexibility to act both from a global and a regional view.

And they call us stupid!