1. Data Dependent or just sick of being at Zero?

We are so fed up with this Fed. They are doing to the world exactly what Bernanke did in 2013 – these constant attempts to massage their message are creating needless damage. Ask yourselves – if a public company issued guidance in this manner, wouldn’t that company face mammoth class action lawsuits from investors?

The Fed’s statement preserved their tightening option for September. This was evident from the flattening of the yield curve, rise in the Dollar and the debacle in commodities on Thursday. The markets clearly believed that they were getting ready to tighten in September and so began readying for it.

Then came the thud – thud of the worst ECI reading since 1982, the year they began keeping the score. Guess what happened to expectations of the Fed ease – the 2-year yield fell by 7 bps and the Euro spiked against the Dollar.

The shock of the number was that great and just as great was the judgement about the Fed’s readiness to tighten:

We are looking at a lost decade of growth, as Bloomberg wrote: The business sector seems even worse than the consumer sector: 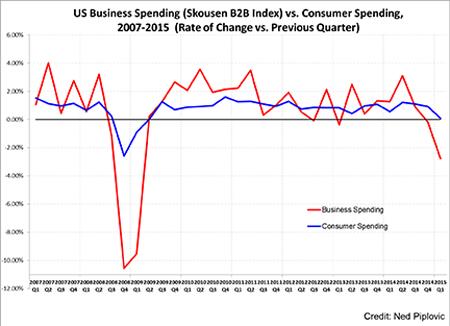 The tweet below from Thursday looked prescient on Friday morning:

We don’t think this level of weakness will stop the Fed. So why don’t they just come out and tighten by 25 bps already? Because they are deeply afraid of looking foolish as people begin clamoring for them to reduce rates again. So this mess could end in the worst way possible – they wait to tighten until year-end and tighten just as the economic trajectory starts falling. This is why we wanted Druckenmiller or Gross to get the Fed Chair – they would have tightened by 25 bps immediately after the strong March report or the strong May report.

How immediately did the ECI number move the US Dollar? 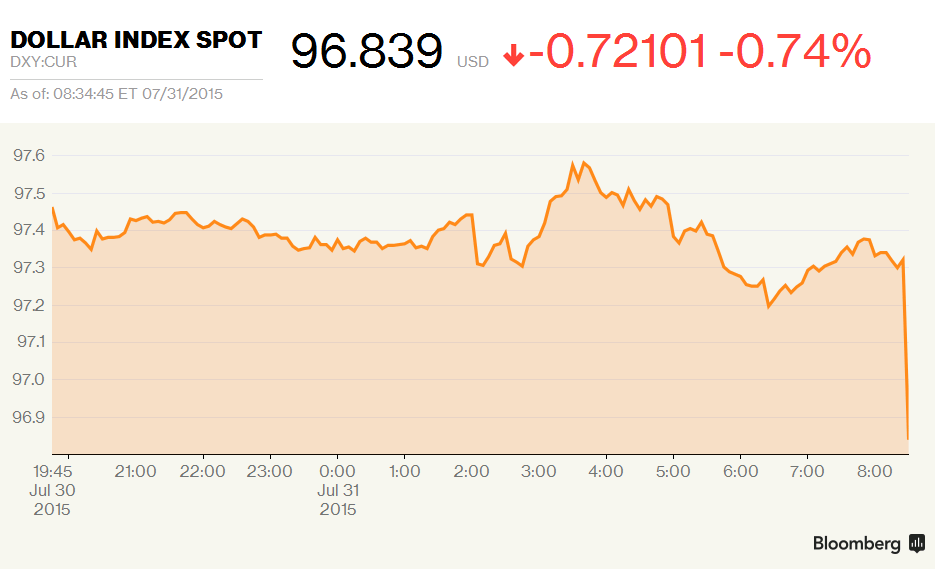 It made Raoul Pal backtrack from his earlier comments: 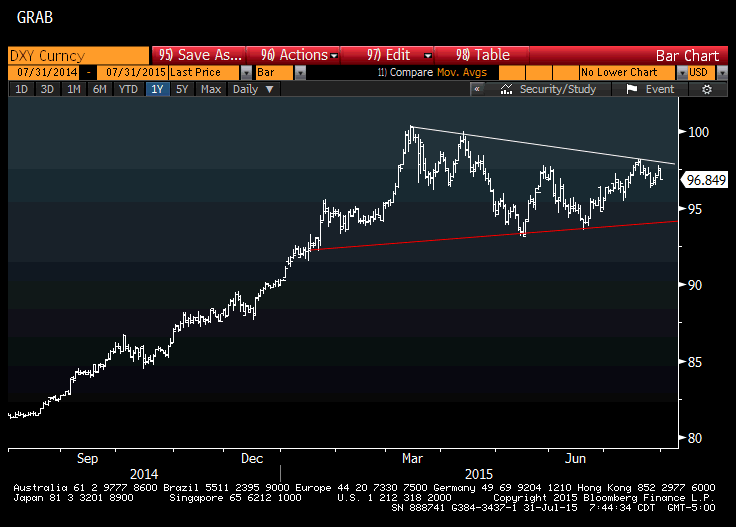 What were his comments the day before on CNBC FM?

Pal also commented on the consensus enthusiasm for Germany-Europe:

Remember what Bernanke’s Taper Tantrum did to Emerging Markets in 2013? Is Chair Yellen’s transparency doing so again in 2015? 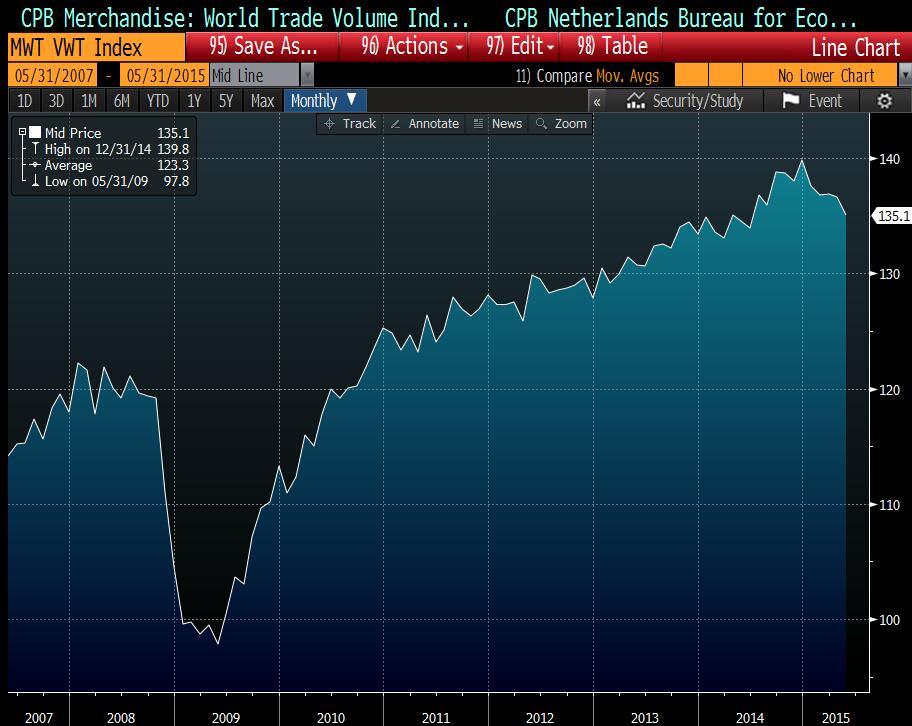 When you say EM, don’t you really mean EM currencies? 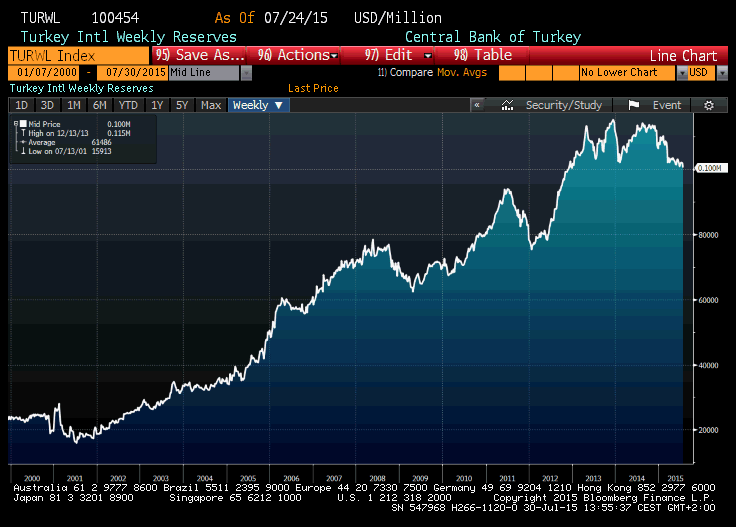 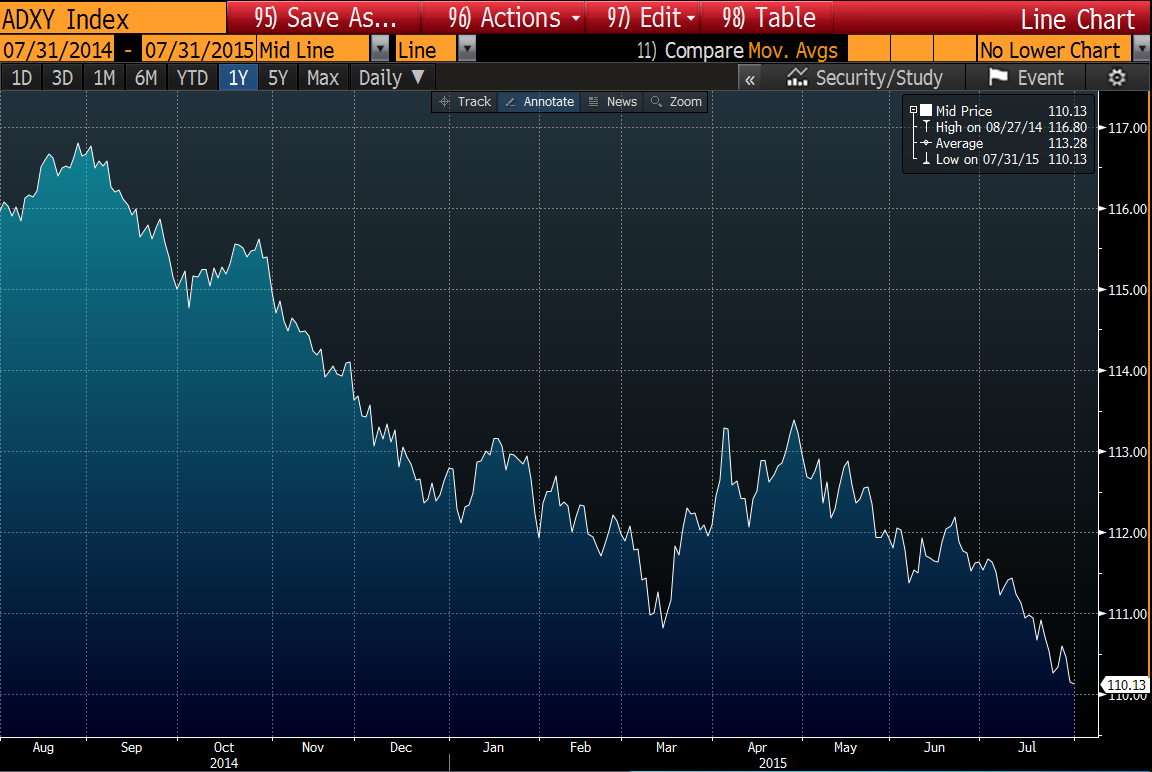 Can any discussion about EM be complete without Brazil? 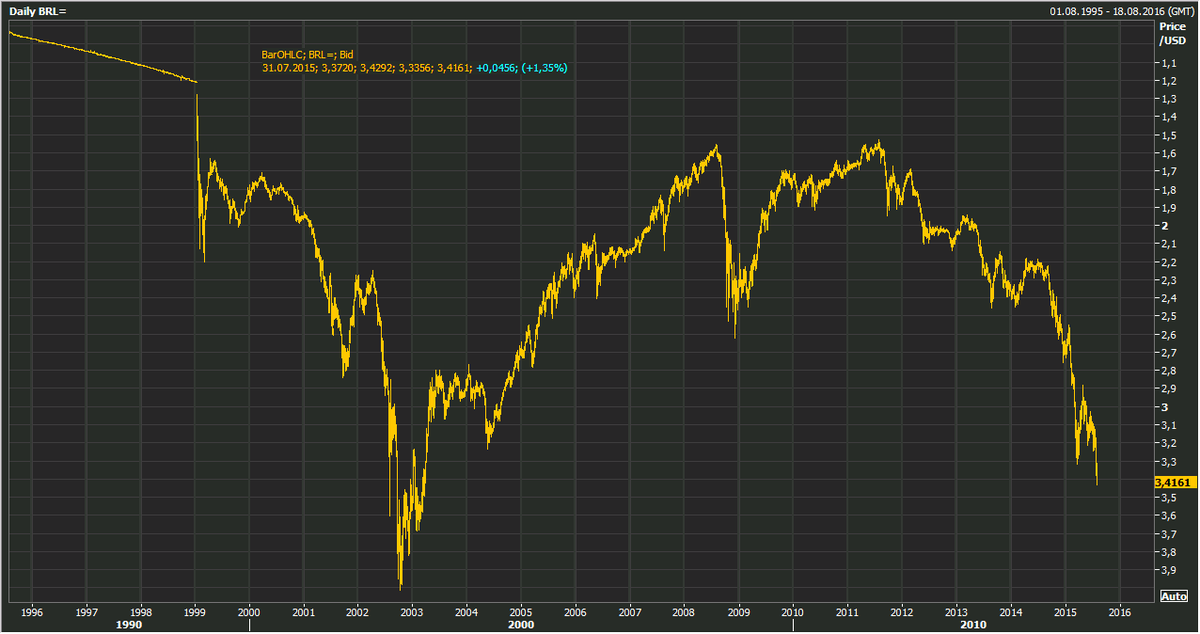 If EM currencies are in trouble, can EM corporates remain unscathed?

With EM currencies & EM debt in this state, can EM equities rally vs. DM equities? But what if the US Dollar reverses and goes down for awhile? Will EM rally or is the EM weakness due to China?

Raoul Pal on China in his CNBC FM comments:

If you think Raoul Pal is negative, you should read Scott Minerd in his China – 1987 or 1929 article. Since the 1987 scenario is the less scary case, we fast forward to Chinese version of 1929:

Why can’t China devalue its currency?

What about the short term in the Shanghai Stock market? Tom Demark on CNBC FM 1/2 on Tuesday, July 28:

How would a transition to China’s 1929 affect US Treasuries? Minerd writes:

Frankly, Minerd is nuts. If the markets really think a Chinese 1929 is a possibility, the US 10-year yield won’t stop at 2%; it will fall to new historical lows. 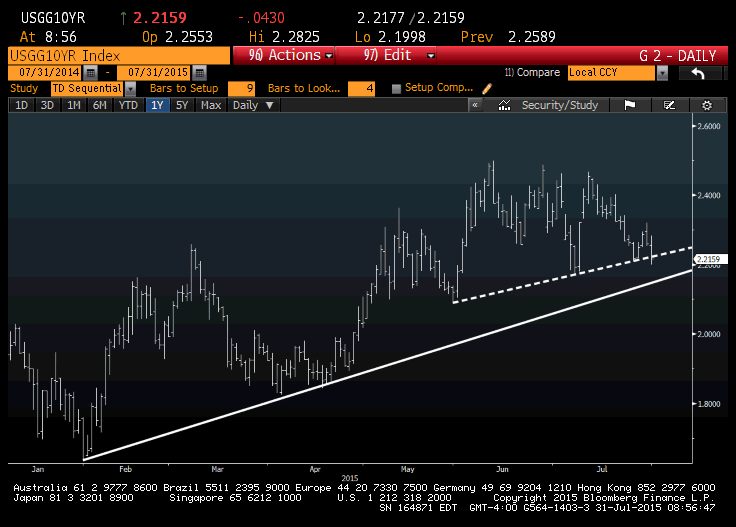 Treasuries have rallied for 3 straight weeks. Does that say sell or buy? 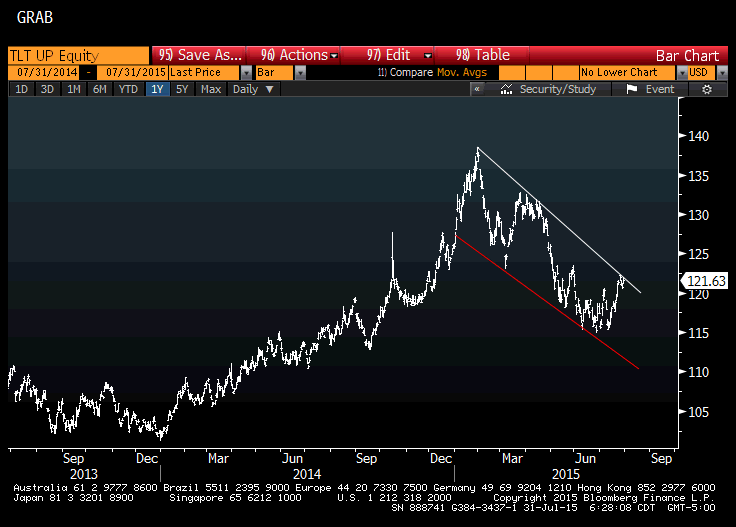 ACG Analytics came in on Friday afternoon and advised selling a portion of TLT to lock in profits from the big rally. JCParets sounded similar caution on BTV’s What’d You Miss? on Thursday:

We are simple folks and we find that TLT’s breakout from 200-day has been very bullish in the past. And guess where the 200-day of TLT is – $124.39. So that’s a confirmation to us of Paret’s levels. 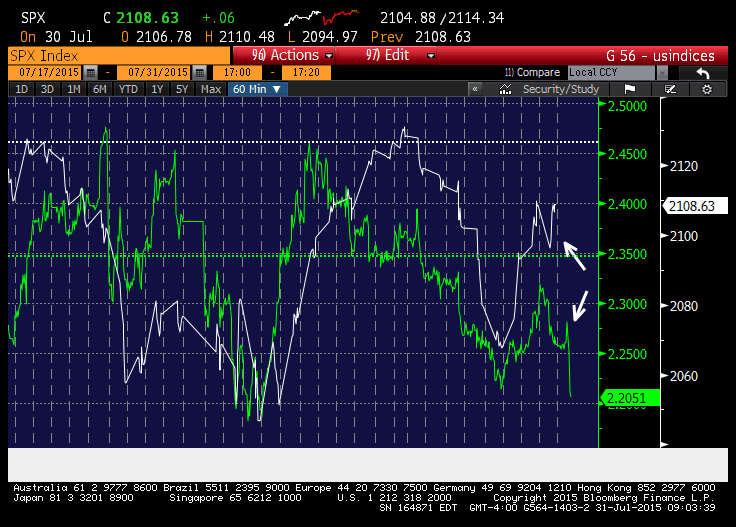 The above has been so negative that we must have a bullish article on that one asset class that has maintained its resilience. That comes from Ryan Detrick’s article Are Investors Really Panicking In A Historically Boring Market?

And Tom DeMark on CNBC FM 1/2 this Tuesday: In his article, The Summation of All Fears, Dana Lyons discusses a  “negative breadth signal” that has “an ominous long-term track record“: “The 59 occurrences all took place in 4 distinct periods, though most of them happened within 2 clusters:

Here are the performance statistics following the 58 prior examples:” 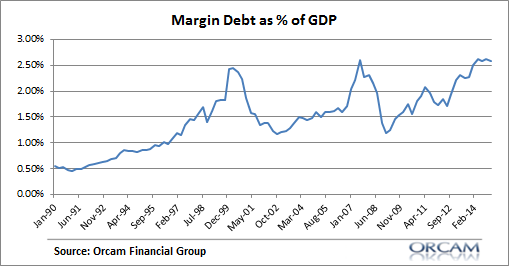 What’s the way for central banks to prevent all of the above? What question did Bonnie Baha of Double Line ask of a bullish CNBC guest -” What’s your feeling about QE4? ”

We are struck by the number of positive, or at least non-negative, comments about Gold this week. On Monday, Larry McDonald suggested buying GDX on CNBC Closing Bell. The miners, he said, ranked very high on their capitulation model. He also added that GDX was at the cheapest level he had seen to Gold. McDonald was not expressing a secular or long term bullish call on Gold or the Gold Miners. he expected a vicious bear market rally.

The technicians seemed to like Gold as well or at least not hate it: 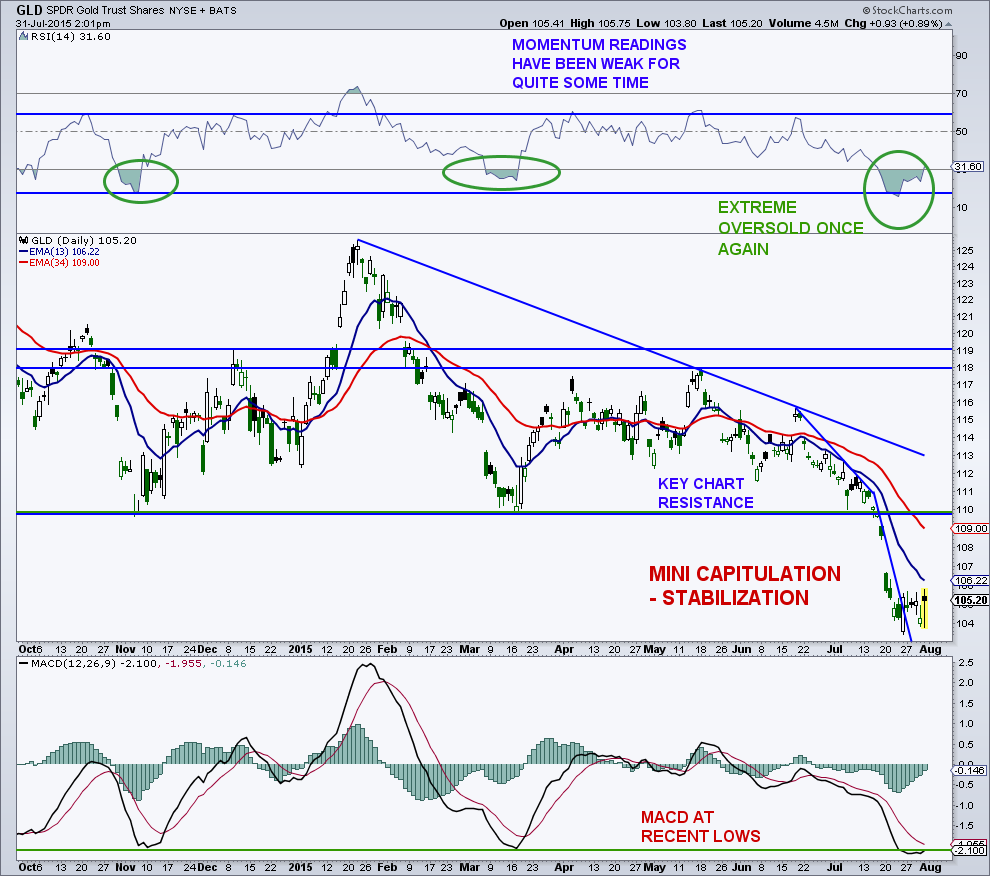 But the long term picture looks terrible according what Louise Yamada said on CNBC Futures Now: 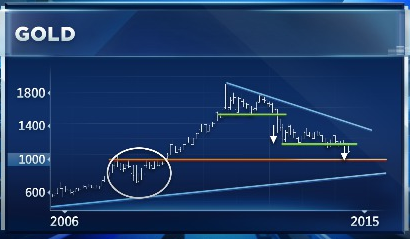 Jeff Currie of Goldman Sachs succinctly used a 3Ds phrase on CNBC FM 1/2 to explain his bearishness on oil – Deflation, Divergence in Currencies & Deleveraging of the Debt bubble in China. He is more inclined to short the longer end of the oil curve that has not factored in these negatives.

Lower for longer in Oil?

The most negative or dire outlook was presented by Ari Wald of Oppenheimer on CNBC FM on Friday:

This view is consistent with the high-yield debt of energy companies is like 2007 view that has been expressed often by Larry McDonald. So what do look forward to – Energy TARP for Oil companies? Or series of bankruptcies for smaller energy companies?