1.One month can make a difference – mucho difference

On September 5, we quoted CNBC’s Simon Hobbs – “We have a Contagion, whether we choose to accept it or not”. We agreed with him and added – “Yes, the Contagion that we have been speaking about since October 2014 has finally entered America”.

But that was contagion entering the US Stock Market. The US economy was still solid. The US Federal Reserve was expected to raise interest rates in their September 17 meeting. This has been the chorus since March 2015 – that the Fed needs to begin raising interest rates because the US economy is strong and because they need to build some room to cut in case the economy slips in 2016. This chorus was led by the Federal Reserve and stories were circulated how “desperate” the Fed was to raise rates.

The Fed had every reason to raise interest rates in April-May 2015. They didn’t. Instead the Yellen Fed began their whispering campaign to “prepare” the markets just as the Bernanke Fed had  done in 2013 by talking about the tapering to come. The Fed-heads are Ph.D. economists and utterly ignorant of how markets behave. They saw in 2013 that the markets front ran every verbal warning the Fed gave and ended up raising market rates far beyond what the Fed was contemplating. This is why the interest rates FELL dramatically as soon as the Bernanke Fed actually began its taper and that decline in rates continued throughout 2014. Yet, the Yellen Fed went on its own whispering campaign in 2015.

At least, the Bernanke Fed could launch its taper in December 2013. In contrast, the Yellen Fed might have blown its chance to raise US interest rates. We know they panicked on September 17 and refused to deliver on the 25 bps rate rise they had conditioned the markets to expect. Their rate rise campaign seems dead now.

Why? This Friday’s Jobs report. The official number was 142,000 jobs added but the reality was very different with downward revisions to previous numbers.

No one was prepared for such a bad number and the reaction in all markets was instantaneous – the US Dollar got hammered, US Interest rates collapsed, Gold soared and stocks fell hard. The problem is not merely this month’s number but the trend over the past several months.

In a growing economy, employment numbers released every month tend to be revised upwards in subsequent months. Just look at the 2010-2014 revisions in green above. Now look at the 2015 revisions – consistently in red, a sign of a slowing economy. You see the hidden hand of the Contagion at work – a contagion that might have been made worse by the constant verbal warnings of the Fed that an interest rate was coming, the rise in the Dollar relative to other currencies and the consequent withdrawal of liquidity from emerging markets, the previous growth areas of the world.

They tell us that the US is a closed economy and exports are a very small percentage of the US Economy. This fact is trotted out when concerns arise about slowdown in China, Emerging Markets & Europe. All this is true. But, as we have pointed out several times in our contagion articles, no one really understands how financial & economic contagion spreads.

We still do not know how but this Friday we all saw that it does.

2. Impact on the rest of the World?

As we wrote one year ago on October 11, 2014 in our first Contagion article,

That was just the beginning. What has happened to the emerging market currencies over the past year is truly stunning. One year ago, China seemed strong and people argued that QE in Europe would help Europe recover from deflationary contagion. Yeah, right!

The reality is that the rise in the US Dollar and the fear of Fed’s rate-hike campaign spread deflationary contagion in the rest of the world, especially in emerging markets.

Well, at least one of these two fears should be laid to rest. Look what happened to Fed rate rise expectations on Friday: 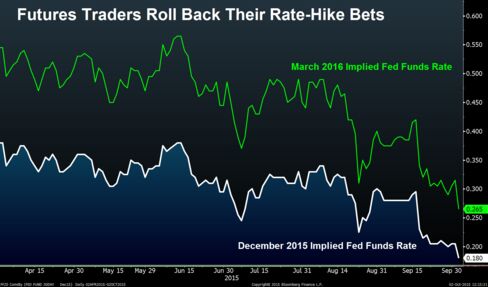 What about the next few years?

This is almost mind-blowing. A peak rate of 1.75% over the next 5 years? But you know what is really really mind-blowing? That this forecast of 1.75% may be too aggressive.

This has to be unquestionably positive for the rest of the world. The twin dangers  of US Dollar strength and Fed rate hikes have receded at least for the near future. That should allow extremely oversold commodities and commodity-oriented emerging markets to heave a sigh of relief. Smart money has already begun betting on a Q4 bounce in Oil, Copper and Gold.

But this respite could be transitory or merely relative. The world needs a growth engine and that is no longer China. Europe seems mired in its own swamp and Japan, well that’s same old Japan. The US has been the foundation of global growth, yes a 2%-2.5% engine of global growth supported by housing and consumer spending. And that rested on jobs.

3. Could Insanity be deemed as Sane?

The US Fed has led the world’s central banks into aggressive stimulative moves called Quantitative Easing. With zero interest rates, the US Fed had run out of room to cut interest rates further. How do you create negative interest rates in the US economy? By adding massive liquidity to the US financial system by buying Government Bonds. The Bernanke Fed began this a few years ago and then  Japan & Europe followed. As we wrote a month ago on September 5, we expect China to launch its own QE in 2016.

But what about the US, the Yellen Fed? By now, everybody knows that QE by the Bernanke Fed created massive inequality as well as a mirage of prosperity that was only based on stock market values.

What about jobs? What has been the reality even under the “good” employment numbers of the past months & years? 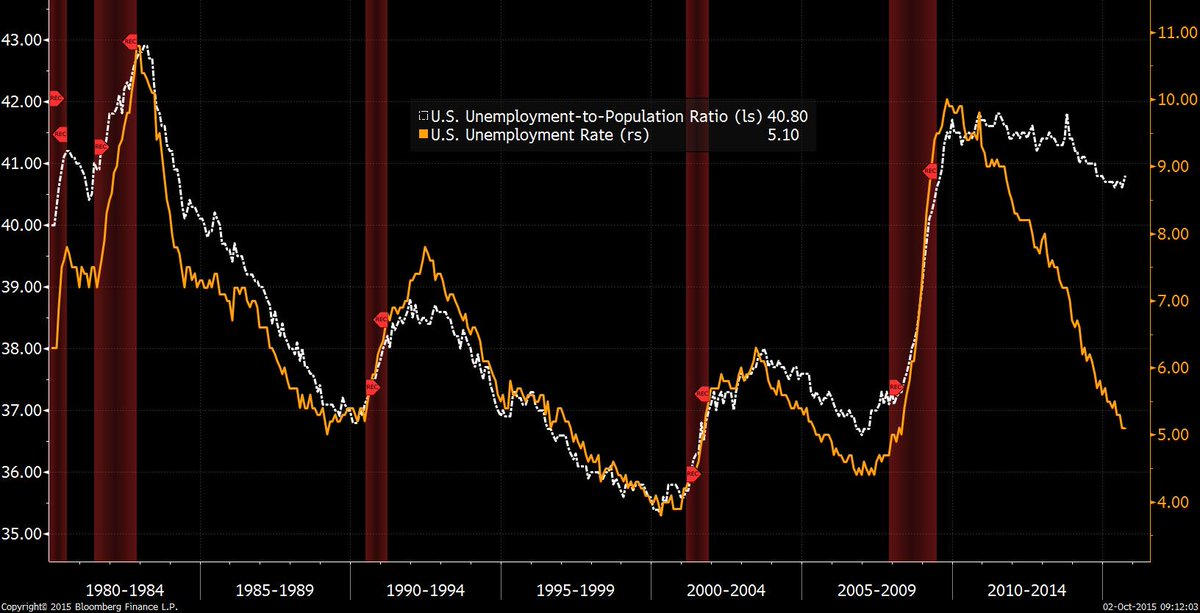 In other words, the low unemployment rate might be due to more people refusing to look for jobs. And this has been the result of the Fed policy – a policy that has kept interest rates at ZERO for 9 years and a policy that has poured in massive monies into the system via three QE programs that raised the balance sheet of the Fed to $4 trillion.

So what could be done now? NY Fed President William Dudley slipped in the following comment in his long interview on Monday, September 28 with Jon Hilsenrath of the Wall Street Journal:

Tough, brave men could read this comment and weep. Yes, weep unabashedly. Because Dudley is hinting that the Fed might consider another round of QE. Yes – so what if the first three QEs have not worked, we can always try a fourth QE? This may be insanity by Einstein’s definition. But what did he know any way? He never became a billionaire in the stock market, did he? And didn’t Newton go bankrupt in the stock market twice before becoming rich in his third attempt? So pox on those who suggest QE4 would be wrong.

Frankly, this insanity of Dudley may be sane in a way. Because what else can Yellen-Dudley do? Not launching another QE would be admitting their approach for the past several years was wrong, totally wrong. And they can’t just sit and watch the US economy go downhill. They got to do something and the only weapon they have is monetary policy.

We pity the Fed-heads. They must be weeping in private while they keep talking bravely in public. 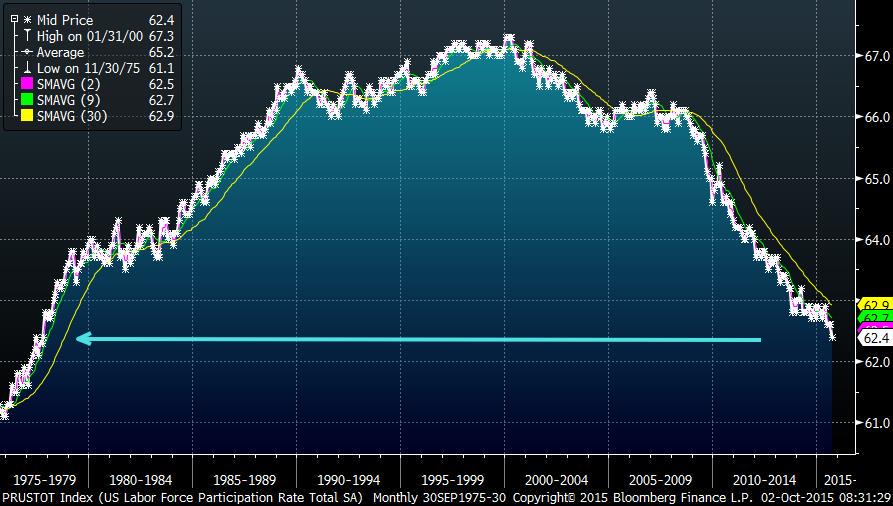 Does it surprise anybody that Teamsters, the large and generationally loyal Democratic labor union, is thinking hard about dumping Hillary Clinton and talking to Donald Trump about supporting him in 2016? Does it surprise anybody that the American people are rejecting the political establishment candidates from both parties and going towards outsiders like Donald Trump?

Trump’s message on the economy and jobs is absolutely on target and smart. And he has a track record of success. In fact, his appeal reminds us for the appeal of Narendra Modi in the 2014 campaign in India. The Indian people looked to NaMo and said – deliver us the prosperity you delivered to your state of Gujarat. The American voters are saying to Donald Trump – produce for us & our economy the riches you produced in your business.

In fact, Donald Trump may be the one candidate the Contagion fears.  As we wrote in our contagion article on September 5, 2015:

The Trump tax plan does this & goes farther. His plan to bring back the $2-2.5 trillion held outside USA by US companies is smart and overdue.  A simple 10% tax on that money would deliver $200-$250 billion to the US and enable investment in America.

Our second plan to fight the contagion in Europe was a retente (!) with Putin. It is time the Ukraine mess is put behind us. We were stunned, joyously stunned, to hear Trump’s wisdom on Syria. Simply put, he is more than willing to let Russia kill ISIS in Syria, he thinks Assad is better for us than the Sunni Jihadi rebels fighting Assad and he would take care of ISIS in Iraq. Putin would love this deal with Trump and Trump doesn’t care about Ukraine. A retente or re-détente with Putin would go a very long way in restoring confidence in Europe, US and the world.

Our multi-year thesis has been that Barack Obama is a mirror image of George W. Bush.  As we wrote on November 8, 2014 in our article Back to the Roots, Mirror Image, or Both?

Frankly, the definitive QED could come next year.  Remember the second half of 2008 and that sickening drop in the stock market? That drop petrified everyone, especially old Americans. Candidate Obama seemed capable of handling that financial crisis than Candidate McCain. That fear drove older Americans, the most loyal Republican supporters, to choose Obama over McCain.

Think to second half of next year. The recovery that began in 2009 will be 7 years old. So even with a normal business cycle, you should expect a slowdown. But these are not normal times. The IMF seems convinced that the entire world may see a slowdown in 2016. And the global central banks are almost out of bullets. For QE4 to lead to a bounce in the US economy before the election, the Fed would have to launch it in the first quarter 2016 and that might seem overtly political.

So what if the contagion wins & the US economy slows down in 2016 with a bear market in stocks? What if China launches its own QE & the Chinese Yuan depreciates big time in 2016? These events could finally shatter confidence in President Obama’s ability to handle the economy. That would conclusively demonstrate the validity of our thesis about Barack Obama being a mirror image of George W. Bush.

And who would that benefit on the Republican side? You know who.