1.“economy is downshifting a little bit“

said NY Fed President William Dudley in his interview with CNBC’s Steve Liesman on Friday morning. By now, everyone understands that markets are responding to only one factor – Fed’s potential response to the downshift in the US economy. A week ago, we argued that QE4 possibility drove the financial markets on last Friday. What happened this week? The best week for the S&P in 2015 and the 3rd best week for Oil since 2009. But what happened to gold & silver, the most obvious beneficiaries of new QE?

For some unearthly reason, Dudley kept insisting that the October Fed meeting was still “live” for raising rates. They probably think this nonsense maintains their credibility. They are the only ones who think so. But what about further easing?

Well, the markets don’t really care right now because they heard Dudley’s “economy is downshifting” line and didn’t need to listen anymore. Because the markets know Dudley & Yellen. And the Atlanta Fed came out with its own downshifting of Q3 real GDP to 1.0% from 1.1%.

But that is growth. How about inflation?

Think about it – the economy, already lukewarm, is now downshifting, inflation is coming down hard and the Fed has no chance of raising rates in the near future. Isn’t this tailor made for interest rates to fall? But they didn’t. In a week in which everything under the sun rallied hard, treasury interest rates went up, nay shot up – 3-year, 5-year, & 10-year yields went up 12 bps and the 30-year yield went up by 10 bps. Could you spell QE4 any better?

But Treasury yields, especially in the long end, do eventually march to the tune of inflation. 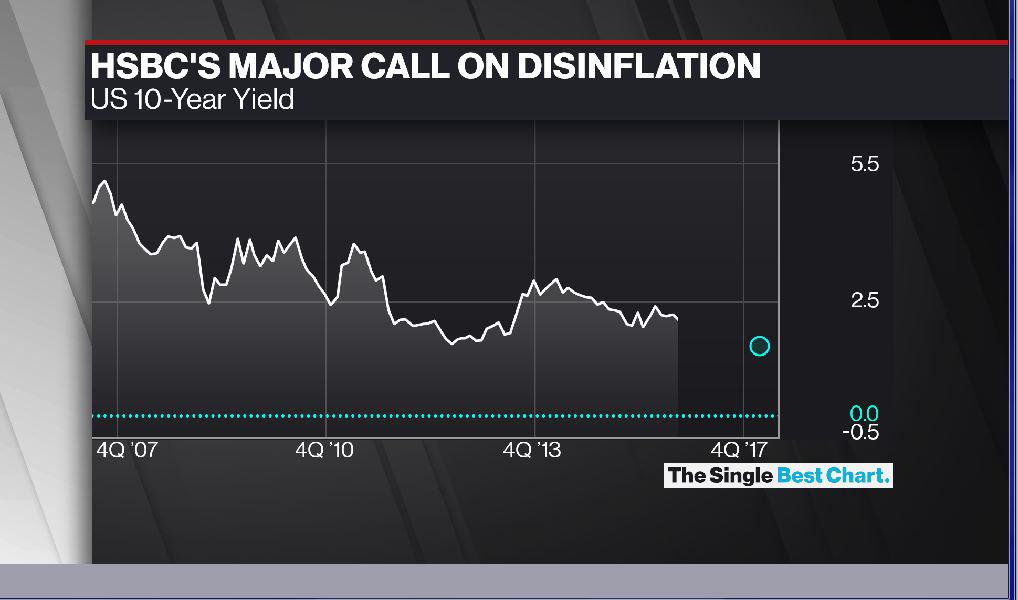 Yes, HSBC reduced their 10-year yield target to 1.5% for year-end 2016. If they are right, is there any chance the Fed will raise rates in 2016?  However, what happens in the short term is anyone’s guess. And not even a savant like Mark Arbeter is willing to go out on that limb. 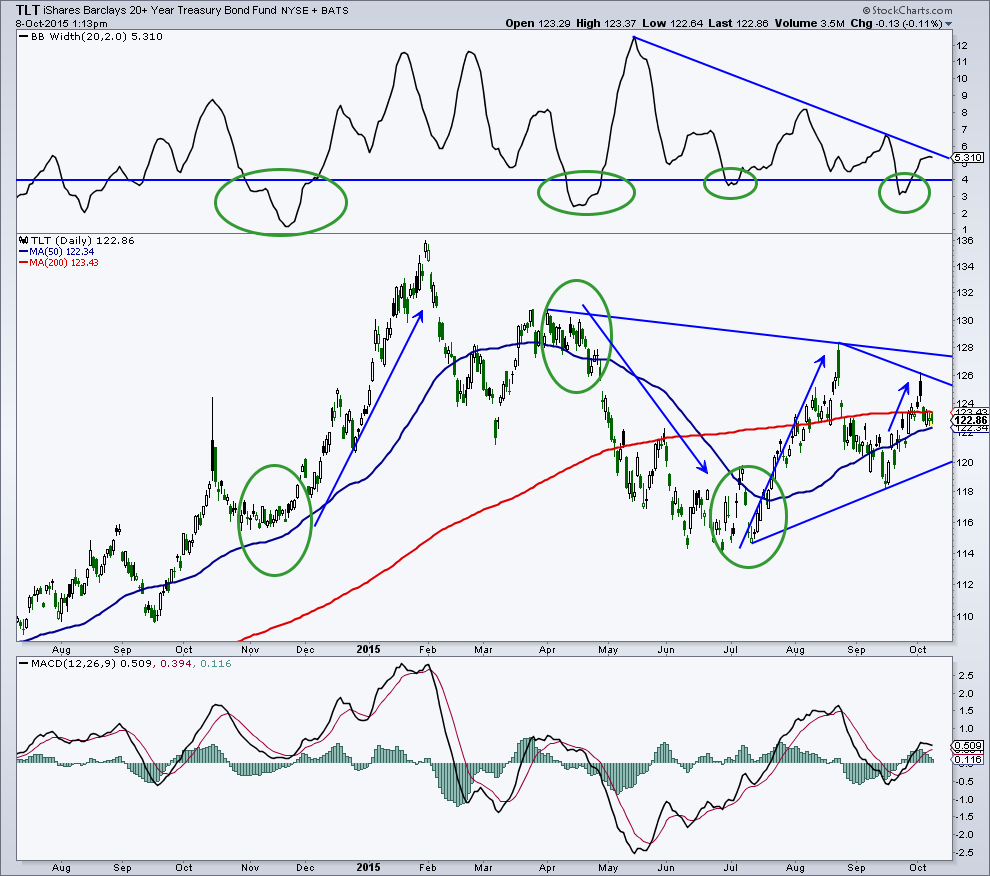 That doesn’t mean the problems with EM debt have been addressed. Read what Carmen Reinhart of Reinhart & Rogoff fame, wrote in her article The Hidden Debt Burden of Emerging Markets:

Prof. Reinhart may prove right but not any time soon. That seems to be what markets & HSBC are saying right now.

We said already that this past week was the best week for the S&P this year. But that description seems so insipid, doesn’t it? Last week, there was fear of the Dow breaking 16,000 to the downside. The Dow did break 16,000 but to the upside by crossing over 17,000.

But doesn’t a picture tells it better?

Yes, the stock market is overbought and sentiment is feverishly bullish. But that could be interpreted either way: 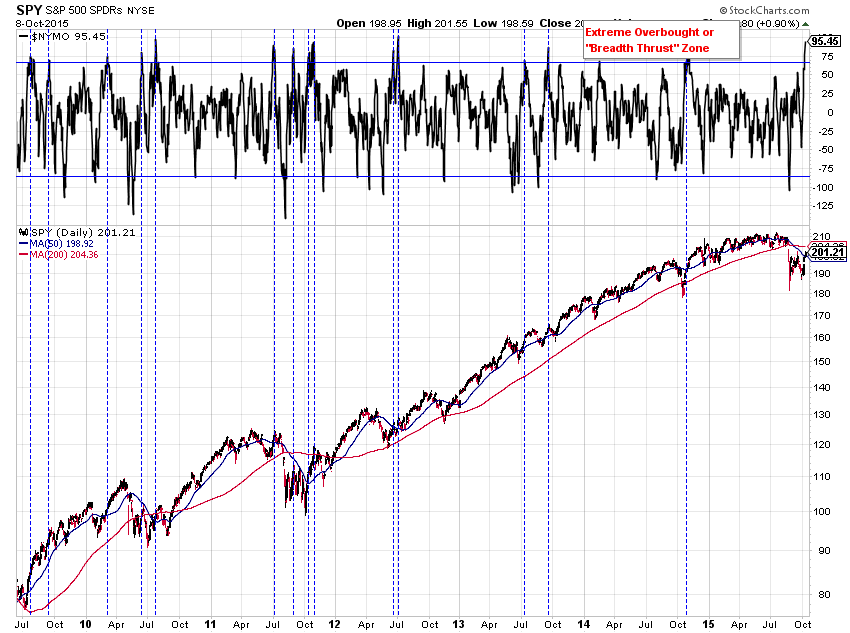 But the real question is whether the next move is up or down.

Next week is Options Expiration week. That suggests some fast & furious action. We remember how nasty the August & September expirations were. But that was in a downtrend. Now the markets seem pointing upward. Will that lead to another bonfire of the shorts?

The conclusion of this detailed discussion:

Chris Kimble writes in his article:

But what about the big thrust in breadth this week? Read how Tom McClellan ended his article Zweig Breadth Thrust Signal:

A clear cut opinion comes via: 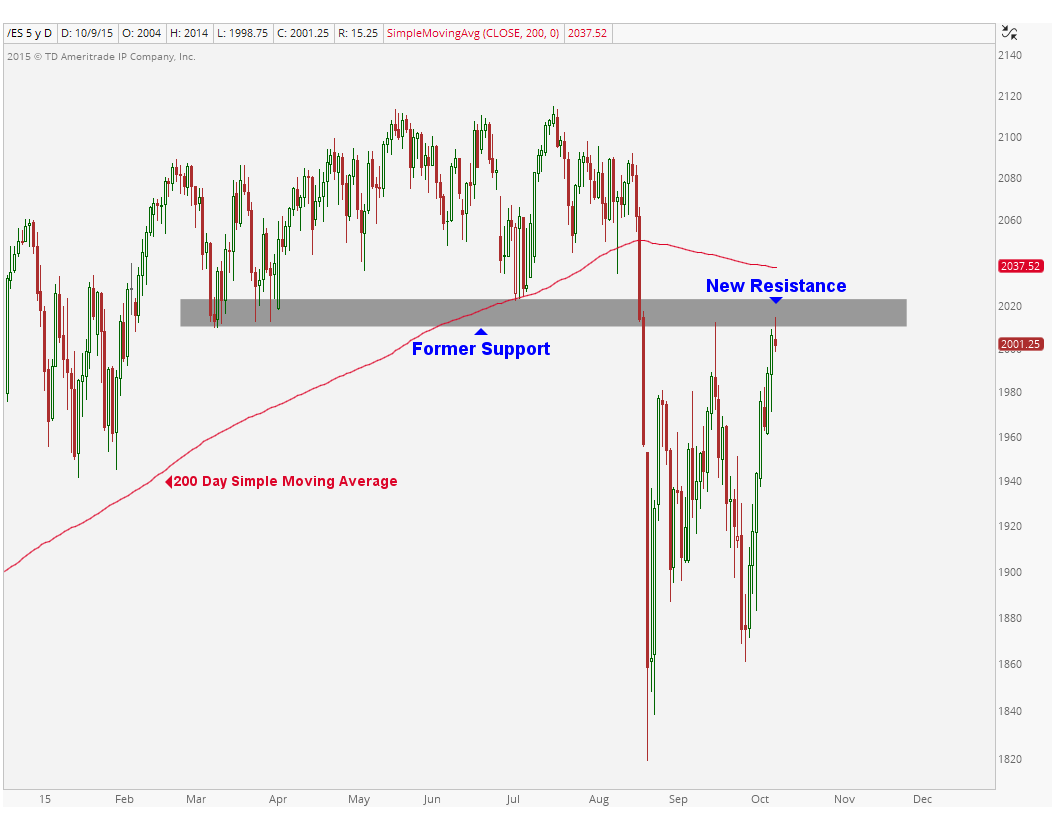 Next week come earnings. Will they matter a lot? We doubt it simply because the rally has very little to do with fundamentals or valuation. It was a massive liquidity-expecting rally off of extremely oversold conditions (DSI of S&P was 7 on Thursday, October 1). We remember a similar rally in October 2007 that ended abruptly when, after talking & walking very dovishly in August & September, Chairman Bernanke surprised the market by being very hawkish in the October 2007 FOMC statement. The market began falling on November 1, 2007 and soon after that came the deluge.

Today we have a Fed insists on talking rate hikes. What if this rally continues into the October 28 FOMC meeting and that emboldens the Fed to either raise or promise to raise in December (as they did in 2013 with the taper)? How will this stock market that has rallied by smoking hopium of QE4 handle the shock of an imminent Fed hike?

The rally was uniform from severely beaten down markets to relatively outperforming markets: 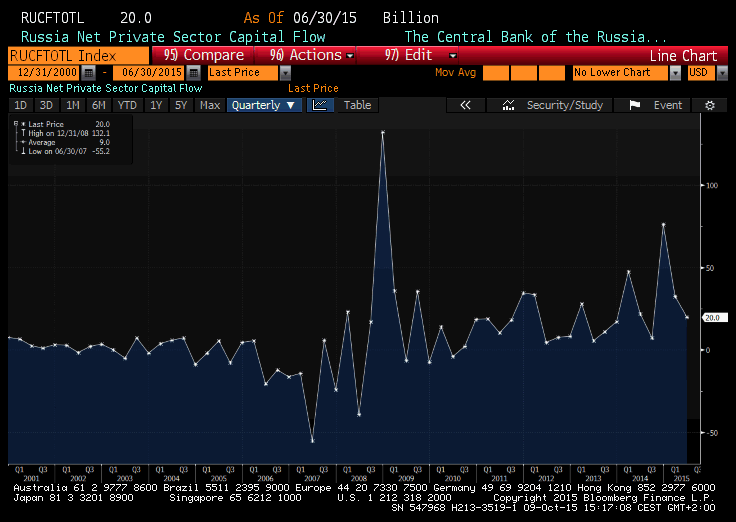 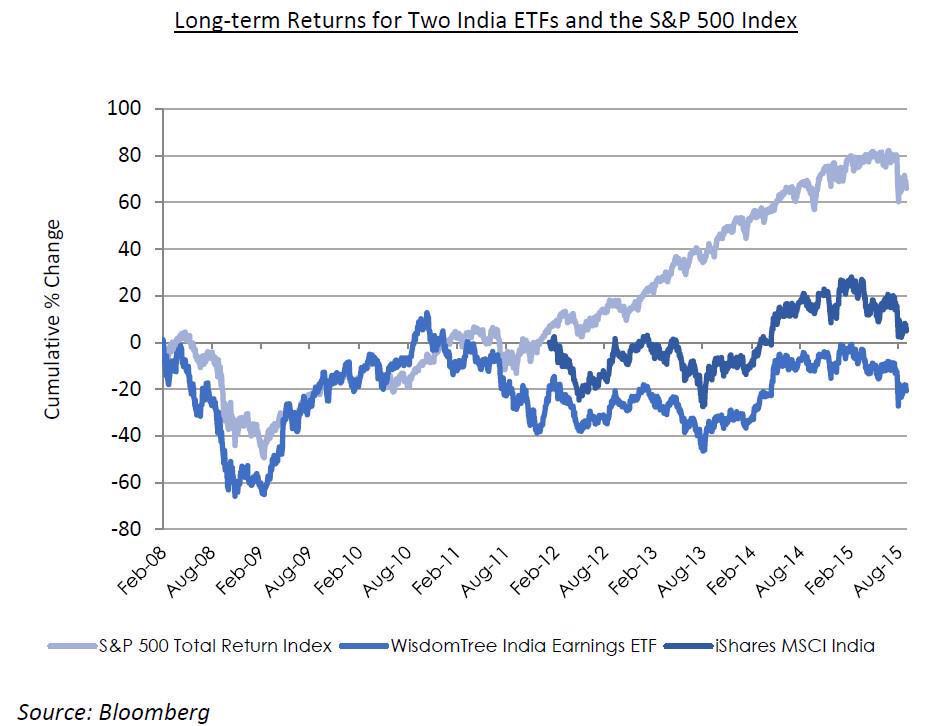 Oil had its 3rd best rally since 2009. And Energy stocks went vertical. Russia shooting missiles into Syria via Iran & Iraq didn’t hurt. These are conditions where no one would want to go short oil over a weekend. Dennis Gartman went long oil with an emphatically bullish call on CNBC FM. Many may argue that the rally is overcooked and should be faded. But few would call this a failed breakout, except: 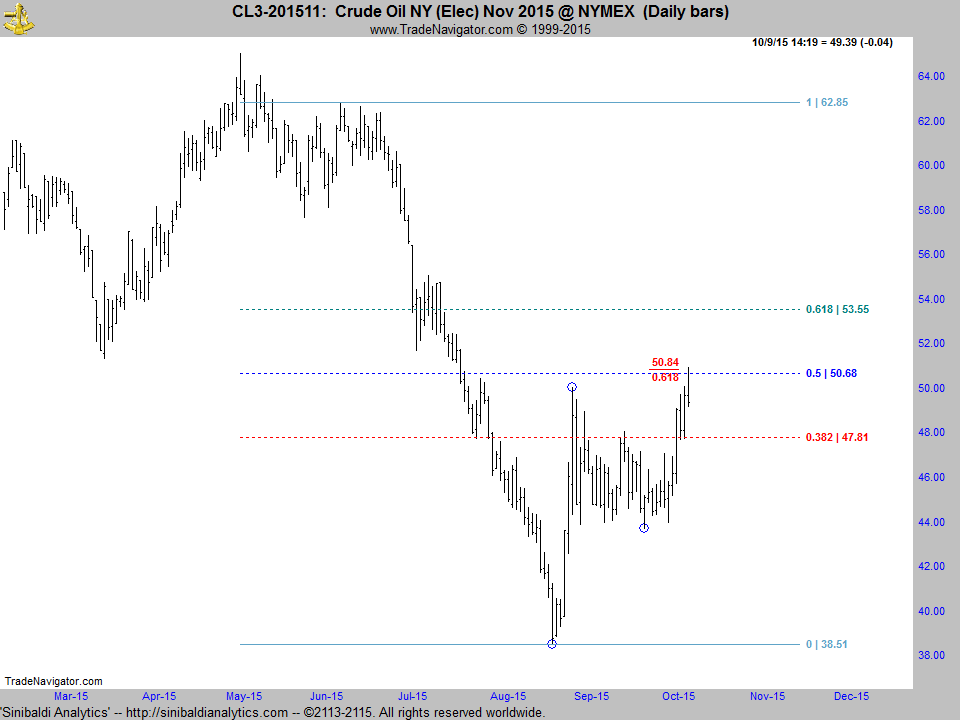 Gold has been very frustrating. Its rally has been weak especially relative to oil except on Friday: 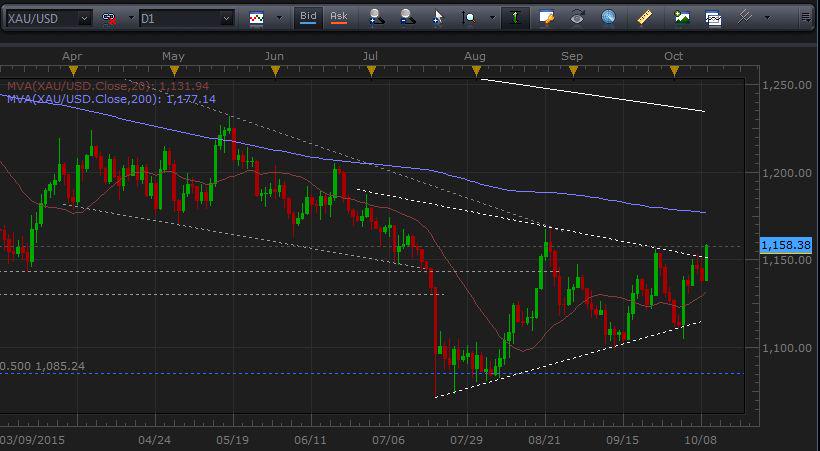 Silver went up 5% this week and the rally in GDX, the Gold Miner ETF, was real and spectacular.