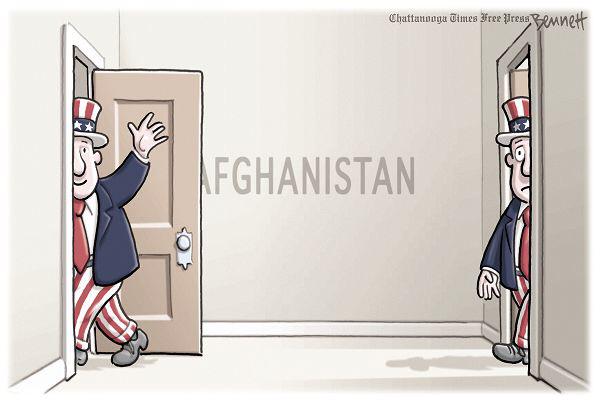 Kudos to Ian Bremmer for capturing the essence of the decision. But he may have been too unkind to President Obama who realistically had no other choice. His policy in Afghanistan has been an utter failure but, thankfully, that failure is not yet evident to the American people. So this was the perfect time to “split the difference” as Frederick Kagan of AEI put it and announce a residual force of 5,500 troops to hold the fort. This works as long as the Afghan Government, so assiduously established by his Secretary of State John Kerry, does not fall under the weight of its own incompetence before he leaves office.

This is not hyperbole. The fall of Kunduz to the Taleban was such a huge military and psychological event that, as Vanda Felbab-Brown of Brookings wrote last week “chances were high, … that the Afghan government might fall, and perhaps the entire political system collapse”.

The reality is that in 2016 Afghanistan may well turn into Iraq of 2014. Last week, we described how similar the fall of Kunduz was to last year’s fall of Mosul to ISIS. Stratfor picked up this comparison this week in their article What the Battle of Kunduz Means for Afghanistan:

We saw last year and again this year that the Iraqi National Army cannot survive on its own. They do not have the kind of airpower US forces used in their war against Sunni Jihadi fighters in Iraq. And their American training has proved utterly useless without close US advisor support or without inclusion of Shiite militias.

The above is scary but nowhere as scary as the possibility Stratfor describes:

Frankly, Stratfor is being too hopeful with their “could still lose” phrase. We think it is a virtual certainty unless Afghanistan gets a patron the way Iraq did. Every one understands that the Iraqi government survives only because of support of Iran and Iranian-backed Shiite militias. But it also survives because its area is almost all Shia. In other words, the portion of Iraq controlled by the Iraqi government is uni-ethnic and uni-sectarian with the foreign patron of the same religious sect.

That will not be the case in Afghanistan. That country is divided into Pashtun, Hazara, Tajik and Uzbek ethnic groups and into Sunni & Shia sects. Their potential southern patron, NonPakistan, is Sunni but from a different Panjabi ethnicity. Their potential northwestern patron, Iran, is Shia and of a completely different ethnic group. Afghanistan, for the past 1,000 years, has been exchanged between these two foreign patrons in full or in part. These two patrons cannot realistically partition Afghanistan into 2-3 cohesive ethnic/sectarian sections like Iraq with Shia, Sunni & Kurdish regions.

So, if the Afghan government collapses, that country may fall back to the chaos of the early 1990s with different warlords backed by these two patrons running different provinces of Afghanistan. In that case, the primary businesses of Afghanistan will be narcotics and terrorism, the two businesses they excel at.

This is too awful to contemplate let alone manage. That is why President Obama decided to leave behind 5,500 troops beyond 2016 to hold the fort until the next President decides what to do with Afghanistan. A classic punt to defend the field position of his track record in Afghanistan. Kudos, Mr. President.