It is back on our heads again with Art Cashin saying on Friday “the Fed might have missed its window mightily” because of what he called “near deflationary free fall going on in commodities“. Cashin said in the same segment that “If they’re going to walk back from [raising rate], they’re not going to walk back this week, … They’re going to wait right to the very end unless markets seem to get really bruised and they step back a little bit earlier“.

This Fed is determined to “prepare” markets for their action before they take it. They haven’t yet realized that the markets prepare not just for their first action but their next action as well. The Fed wanted the markets to price in a rate hike in December. That the markets did but they didn’t stop there. Instead, as an article argued on Tuesday,

Those who doubt this should look at the carnage of this week – Oil down 8.5%, base metals in near deflationary free fall, and

The Fed may not understand how markets or people react. But shouldn’t they at least understand recursive loops? Whenever the Fed has signaled a forthcoming rate hike this year, the Dollar has risen, commodities have crashed, liquidity in high yield markets has disappeared, stocks have fallen leading the Fed to not tighten as promised. This, in turn, has resulted in Dollar weakening, commodities & commodity markets rallying, high yield market recovering and stocks rallying leading the Fed to signal a rate hike ahead which in turn has re-initiated the rise in the Dollar, commodity collapse and stock decline & so on.

This is why we felt it was incumbent for the Fed to tighten last Friday after a fantastic NFP number. Had they done so with a clear statement about no further rate hikes till March 2016, all uncertainty would have disappeared and the feared Fed hike would have been in the rear view mirror. Markets would have priced that much faster and much cheaper.

Instead, long live Damocles and his sword.

Last Friday it looked like yields were headed for a breakout. But one smart technician raised a significant question last Friday:

The 5-year answered by declining by 7 bps this week. What about the longer end? Another smart technician  made a very well-timed call this week:

A day later, Parets published his call on yields: 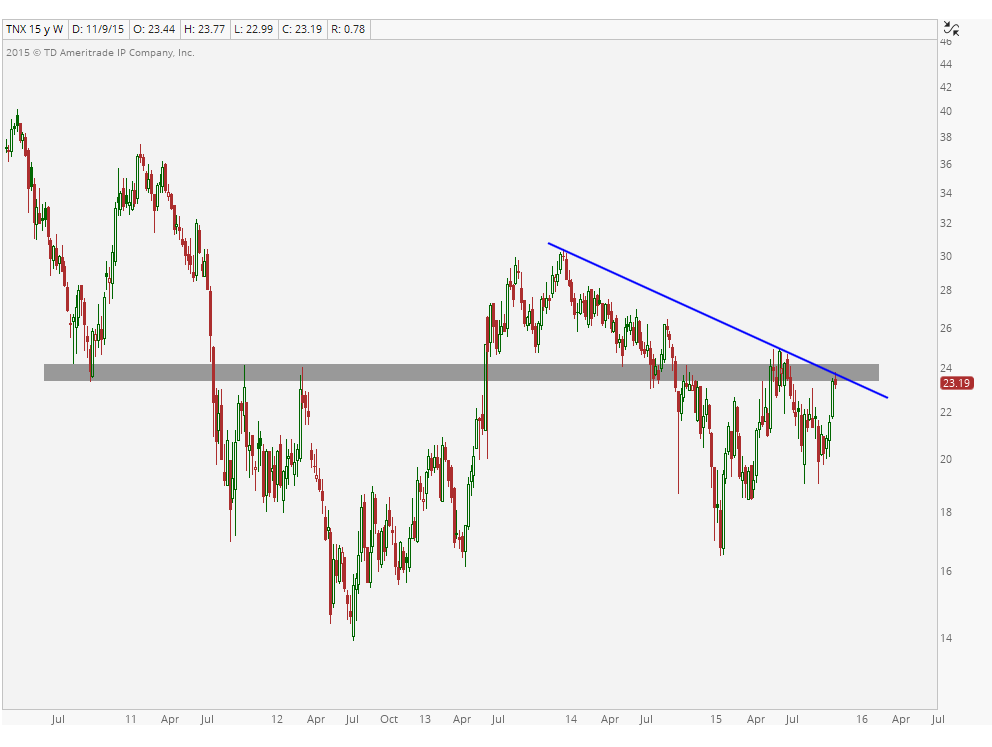 And the 30-5 year yield bull-steepened by 4 bps this week, a sign of a leak in the wall of certainty of a December Fed hike. The 2-year yield closed the week at 85 bps, a full 10 bps lower than the 95 bps level in the immediate aftermath of last Friday’s NFP number.

Not only did Treasuries rally but high yield ETFs underperformed TLT by 2% (HYG) & 2.5% (JNK).

And as a Bloomberg article stated: 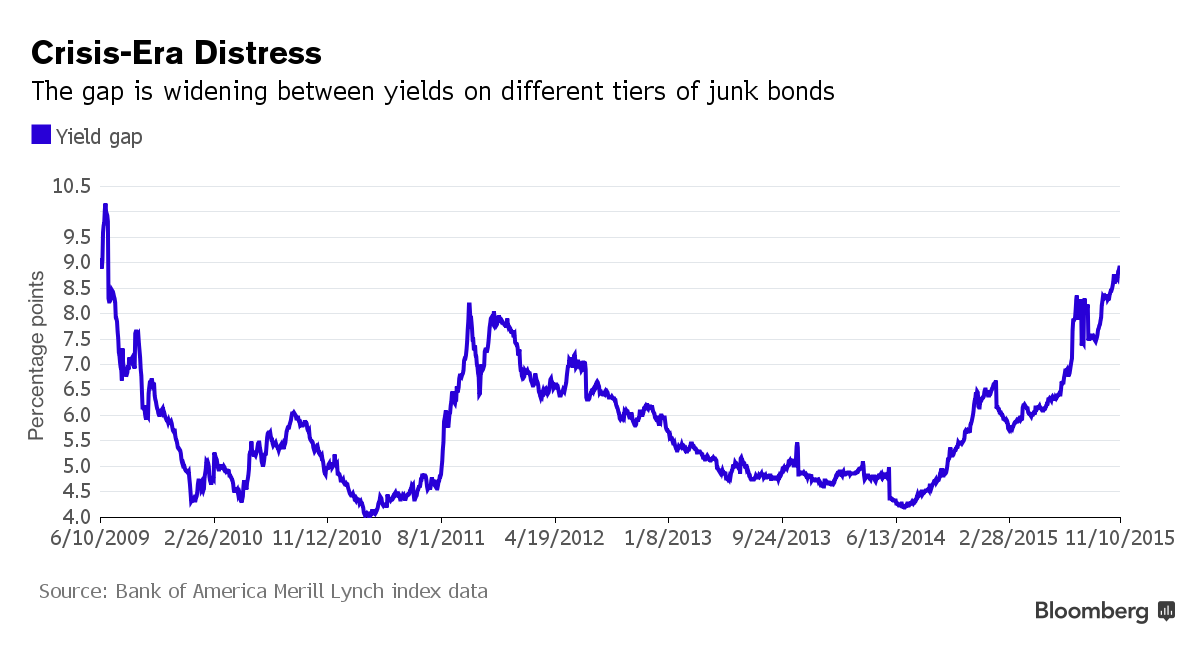 Last week we featured several opinions that suggested a decline in the short term. These proved spot on. One such opinion was reiterated this week:

This chart and the record of November expirations suggest difficulties ahead: 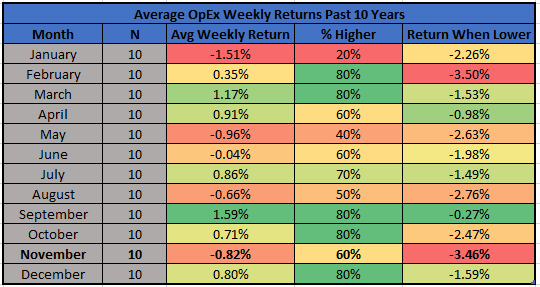 The S&P broke below both the 200-day and the 100-day moving averages. It closed at 2024 which to some was an important level. Parets focused on another level:

The stock market is either oversold or almost oversold depending on the oscillator used. But what about volatility & other indicators? 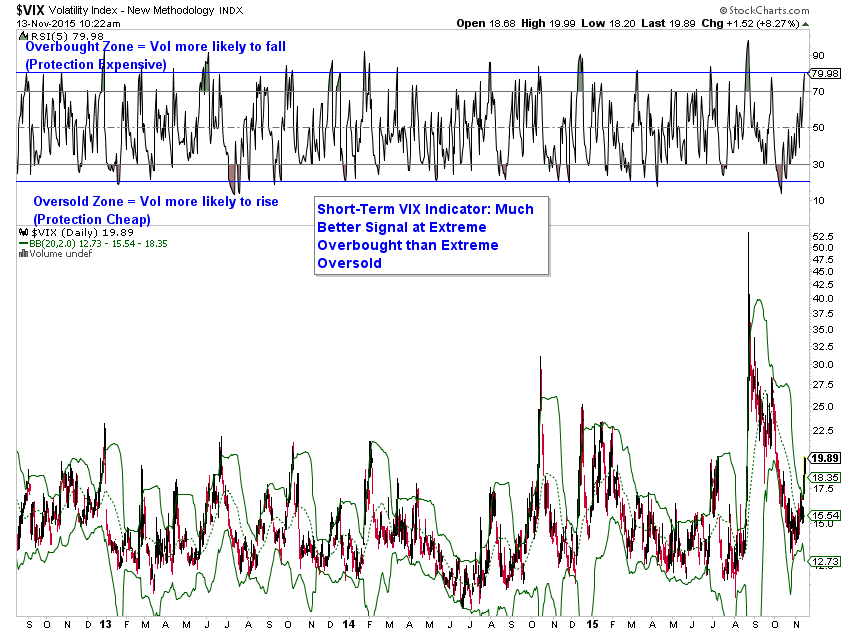 But markets that don’t rally when oversold get really ugly. And the horrific attacks in Paris may add velocity on Monday to this week’s decline.

What happens to the U.S. Dollar? Does this week’s weaker data create a little headwind for the Dollar? Or does the uncertainty about the Paris attacks make the Dollar stronger?

Tom McClellan wrote about copper and the Dollar in his article on Thursday:

McClellan also wonders “does that mean a real bottom for copper prices, or a top for the dollar?  That is the interesting question, and I do not have an answer.”

And in the same spirit,

Of course, all of this was pre-Paris attack. Will France & Europe use this to get militarily active in Syria? If they do, do they side with Putin and catch ISIS in a pincer? Or do they get into Syria against Assad and begin arming the “moderate” rebels a la Afghanistan? Oil was down 8.5% this week? Will it bounce next week on fears of escalation?