That is the colloquial expression Gary Cohn of Goldman Sachs used earlier this week when asked about the possibility of Fed raising rates in December. Well, the Federal Funds market agreed with him on Friday. 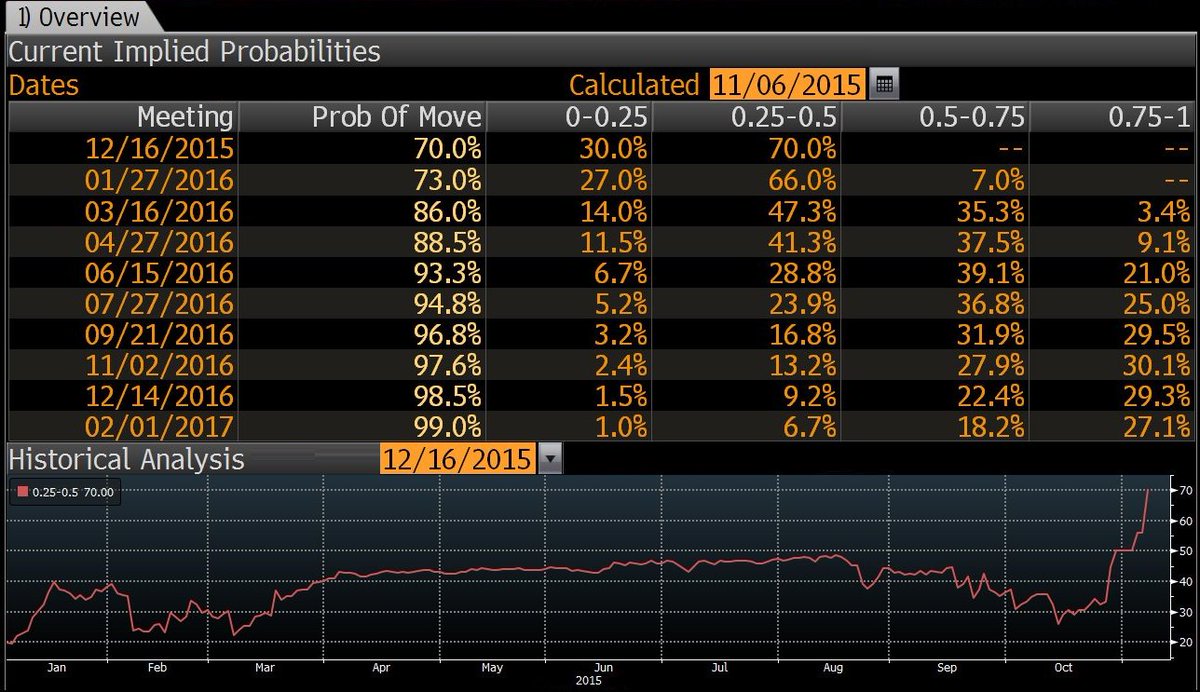 How could they not? After all, Chair Yellen had virtually promised a rate hike in December in her Congressional testimony. So Friday’s stunning number of 271,000 new jobs removed any doubt any one might have had. It wasn’t just the headline but the details too:

So a 25 bps increase in the Federal Fund rate in December seems a foregone conclusion. But then why didn’t Chair Yellen raise rates on Friday? We wish she had. She could have added all the appropriate sedatives about the path to higher rates being long and shallow. A rate rise on Friday would have eliminated any uncertainty and removed the Damocles sword of a December rate hike from hanging over our heads for the next 5 weeks. Remember, the biggest headache for all markets has been the will-they-won’t-they uncertainty. But why should there be any uncertainty? Think back to October 3, 2015 and the printed NFP number of 142,000. Remember what David Rosenberg tweeted on that day?

Remember when the U.S. Economy used to be called a Super Tanker that could only turn slowly. Today’s economy seems to be acting like a speed boat or worse a canoe whose direction can swing violently. How does the largest economy on earth can swing from a horrific 142K jobs print last month to a 271K jobs print this month? That leads us to wonder about the NFP print in early December.

Why even risk caveats like “Barring a disaster in November“? Why didn’t they act by 11:00 am on Friday? That should have been enough time to gauge the reaction of markets to the NFP number. The reality is that the Fed is terribly scared of their inability to understand markets. That is why they go to absurd lengths to “prepare” the markets. Heck, even they must have realized their “preparation” is more dangerous than any decision could be.

We are in a very uncertain period in the world, especially given the destruction of the Russian charter plane with 224 passengers on board. Not only does it send chills down the spines of anti-terrorism officials in the world, it also raises the specter of a “deadly retaliation” by Putin in the words of a CNN reporter. Why risk any of this or even a violent rally in the Dollar? We do wish Chair Yellen had stepped in Friday late morning and raised rates by 25 bps while categorically taking off the table any more interest rate hikes till 2016 or even until March 2016. Seems so simple to us.

Let us be clear. We really don’t expect another violent swing in the NFP number next month or any unexpected turmoil in markets or geopolitics. But we do expect another unnecessary and totally avoidable hit to the Fed’s credibility if, for any reason, the Fed doesn’t raise rates in December.

2.It’s all about the Fed.We may hate it and we do. But there is no question that almost every asset class & even rotation within an asset class is turning about to be about the Fed. When the Fed surprised by being dovish in September, commodity stocks, emerging markets, gold & Treasuries rallied. Look the action since the October meeting, totally reverse. This is not entirely due to the Fed but more so about the large positions that are built up and unwound. But the Fed is making this worse by the uncertainty they have fostered. Hopefully, that ended on Friday. 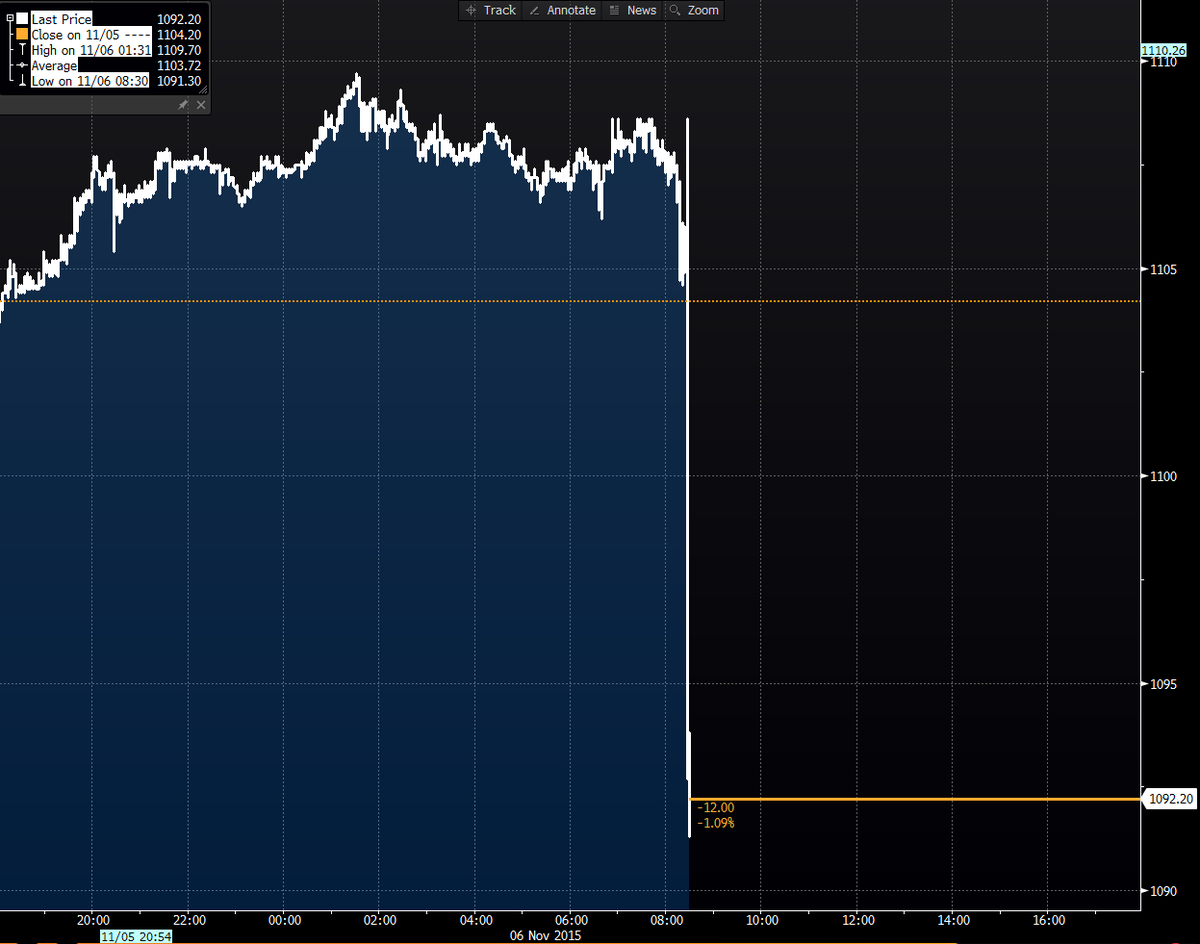 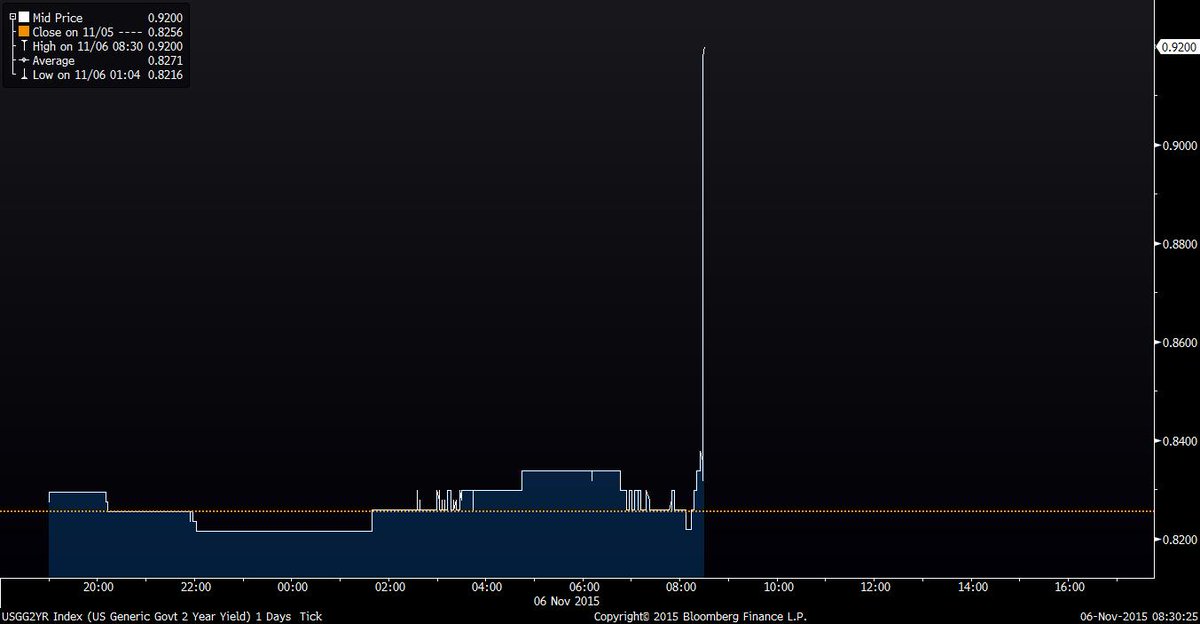 We saw the 2-year yield spike up 11 bps to 95bps in the immediate aftermath but it closed up only 4.8bps to 88.99bps. What about the 5-year yield? Will that break through?

Will the 5-year break through and alert us to a real change in interest rates or will it fall back to what we have seen at the last peak of the 2-year yield? 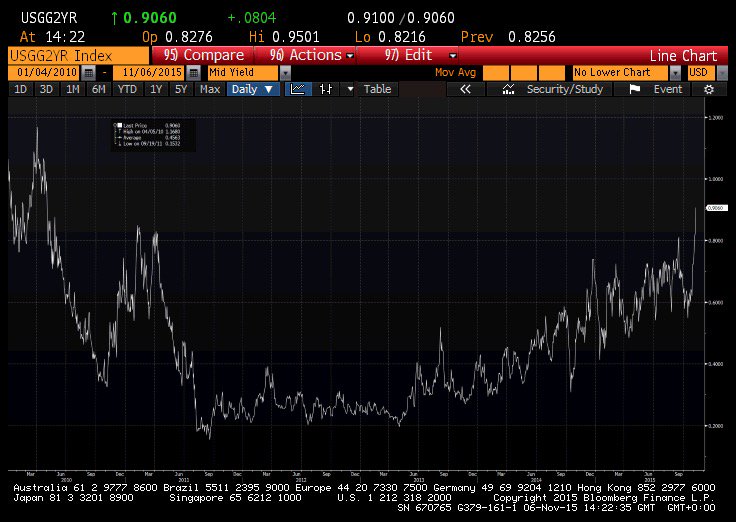 Kudos to Bear Traps. They were the only ones we saw who recommended buying an initial & partial position in both TLT & XLU on Friday afternoon.

3. Stocks.By now everyone gets that the Fed looks at only one indicator – the US Stock Market. That’s why we were so convinced that the Fed would be hawkish in the October FOMC meeting. How could they not after the rip roaring rally in October? But the symmetry is indeed interesting. The Fed went dovish in the September FOMC statement and two weeks later the September NFP number proved terribly disappointing on October 2. The Fed reversed and turned hawkish in the October FOMC statement and a week or so later, the October NFP number came in stunningly strong on November 6. Did they get lucky on two successive occasions or are their models so accurate?

More importantly, will the current rally continue and allow the Fed to raise rates in mid-December or will we see a real correction? Friday’s action was indeed reassuring. After an initial selloff, the stock market regained its composure and the major indices closed positive or nearly unchanged. Was that a reaction to the NFP number or simply an unwillingness to sell in the midst of this Q4 rally? Which performance-fee compensated manager would sell in early November given the track record of November-December?

But both the charts above suggest a short sharp decline ahead. We do worry sometimes about our short term focus this year. That is why it was such a relief to hear the best macro investor of our time, Stanley Druckenmiller, say essentially that he views the long term as a series of short terms. He then added that he is “playing”, despite his conviction about a bubble in short term behavior in the markets, via longs in Amazon, Netflix vs. shorts in value stocks that are engaged in buy backs and financial engineering. And he is short Euro because the long held monetary policies are now diverging between US & Europe.

Mr. Druckenmiller certainly proved right on Friday.
The big question is whether Dollar breaks out from here: 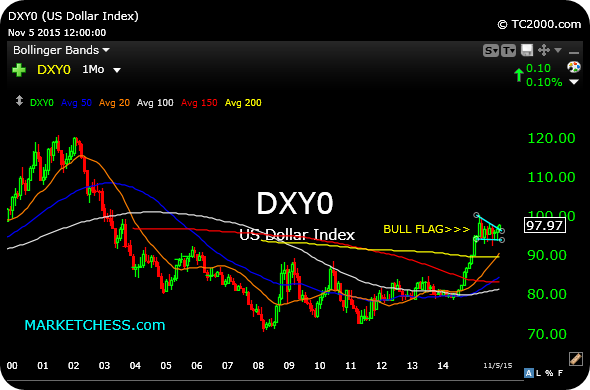 This is the one factor that is likely to prove decisive for commodities & commodity markets.
Send your feedback to editor@macroviewpoints.com Or @MacroViewpoints on Twitter