That emphatic statement was from Jon Hilsenrath on Maria Bartiromo’s show on FBN on Thursday morning. The same line, if uttered on Friday after the close, would have sounded like a sarcastic dismissal or a serious question. Such was the speed & scale of the turn in global conditions on Friday. 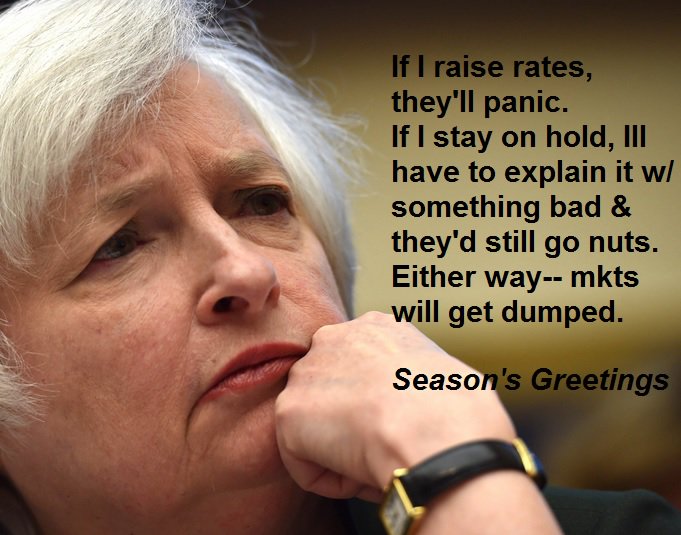 Frankly, we have no sympathy for Chair Yellen or the FOMC. They have been faint hearted to the point of being petrified of market reaction. And faint heart never won the lady, the lady called market stability. Secondly, they are utterly clueless about how markets work. That is why they did not raise rates on November 3, the day of the stunningly strong payroll number. These twin weaknesses have made them focus on “preparing” markets for the rate hike and forget the propensity of markets to run ahead of their “preparation”. To top it all, they chose to hike in December, the month when calendar pressures are maximum on investors, managers & markets.

That calendar pressure, in our opinion, was why investors besieged a credit hedge fund named Third Avenue for redemptions forcing it to deny redemptions and announce closure of the fund. That action, as Art Cashin said on Friday, created “echoes of BNP in 2007 and of Bear Stearns Hedge Funds” in early 2008. This in itself was perhaps caused by a precipitous fall in oil this week after the OPEC meeting on last Friday ended in what Cramer called “end of the cartel“. And the oil price is central to a large segment of high yield credit market which began falling hard. This is not a new story but perhaps it became a bigger story due to both calendar pressure on investors to take losses & adjust portfolio allocations and due to big decision from the Fed next Wednesday. Add to this the steep fall in Chinese Yuan and the debacle in emerging market currencies. All the CCCs came together on Friday morning:

Frankly, the seeds of this were sown week ago Thursday with Draghi breaking ranks. Yes, he recovered mightily on Friday and the markets responded to his firm reassertion of control. But, as we said last week, the currency & rate markets only recovered 1/3rd on Friday, December 4 of what they had lost on Thursday, December 3. They took the weekend to decide that Thursday’s announcement was more real than Friday’s reassurance and they came Monday with that resolve. We did think this resolve had manifested itself by Thursday morning especially via:

She was right and the S&P did mount a rally on Thursday afternoon. So we confess the decline on Friday morning caught us by surprise. At this stage, we have no idea what the Fed should do next Wednesday let alone what they would do. We have no idea how the markets may react in response to what the Fed does & says on Wednesday. Gundlach seemed to imply on Friday that if the markets remain in turmoil into the FOMC decision, they will not raise rates. But what if markets have exhausted their energy by Wednesday? Will the Fed raise rates then and assure that they are done for months? Remember last year?

If that happens, then one parallel would keep its current track record.

Given the track record of Monday opening after a Friday rout like yesterday’s, Monday, with Tuesday if necessary, could get 2015 chart down to the bottom of the 2011 chart and then post-Fed boom! This is rank speculation and not a studied, analytical comment. Just goes to show we don’t have the foggiest what happens on Monday & next week.

But the real question is:

The quote above is a part of a smart description of the two outcomes of the high yield carnage: 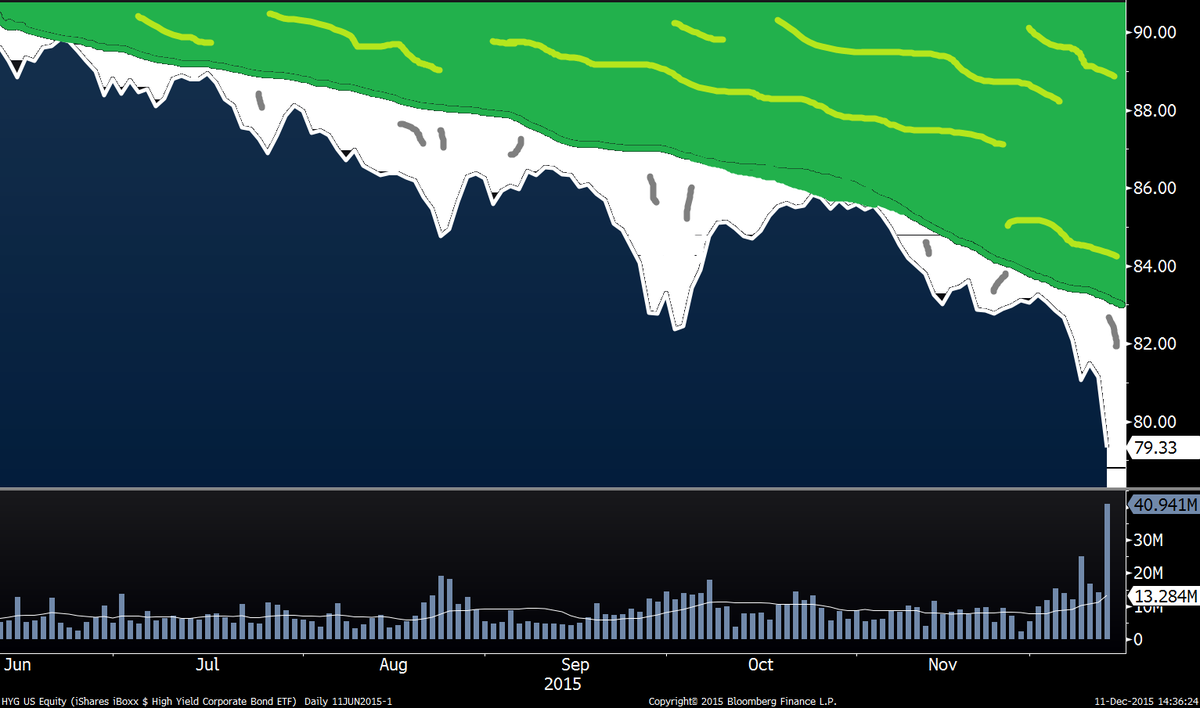 In contrast, Gundlach seemed to suggest an oversold opportunity by recommending “closed end credit funds”. We hope Gundlach is more accurate but the high yield situation does seem to echo the 2008 credit carnage. Tom McClellan is closer to the Icahn camp in his Is this 2012 or 2008? article:

I am persuaded that the market in 2016 will follow the more bearish path.  Here are the main reasons:

If flames do spread, where could they go next? 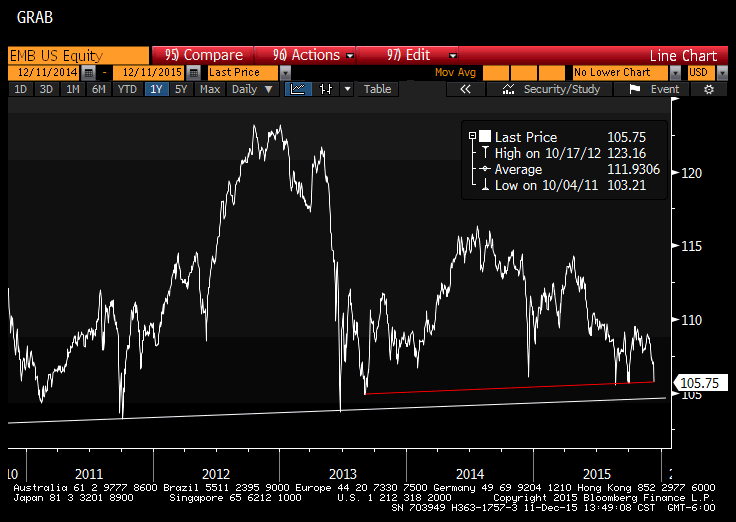 A few weeks ago, we recalled the dictum Goldman’s Abby Joseph Cohen had enunciated in October 2000 – that you always get a year-end rally unless you have deflation. We have found this to be empirically valid at least until now. Regarding the deflation argument:

We don’t recommend, at least not for the faint of heart, tweets of Raoul Pal from Friday. Interested readers can look those up via his tweeter handle. One is most relevant to this question: 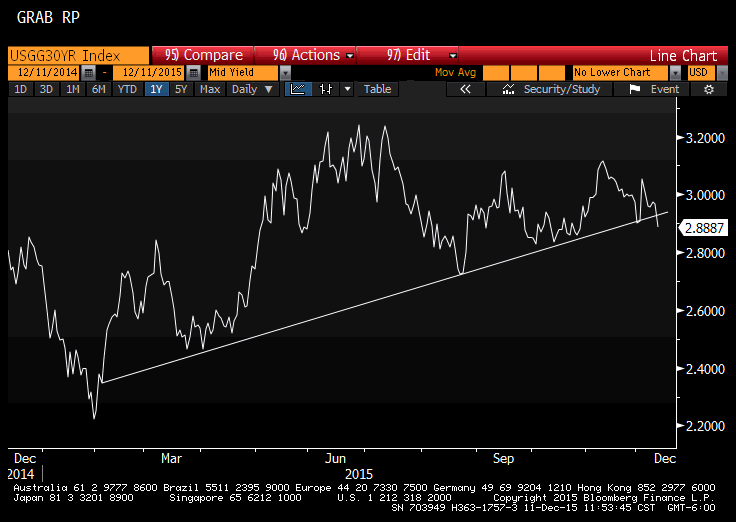 And what characterizes the beginning of a deflationary period? 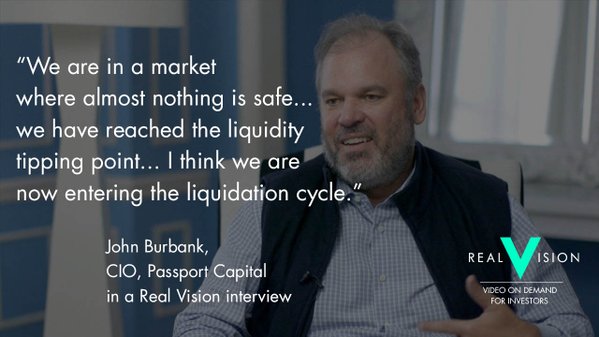 What stopped earlier feared onsets of deflation? QE from the Fed. Are we there yet or do we need more downside damage? Or perhaps the Fed needs another screaming rant by Jim Cramer? On the other hand,

Does any one argue for reflation?

So, after all this, what does the Fed do, raise rates now or do what a smart guest said he was doing? – “wait for January 4, 2016 – if that ISM number comes in closer to 45, then a recession is coming in 2016“. The answer may depend on whether markets remain in turmoil into the FOMC meeting on Wednesday.

But what is the Treasury market saying about it?

But what if Fed’s rate hike on Wednesday is the “one & done” hike into a slowing economy? That would mean 25 bps will be the Fed Funds rate for all of 2016 with a slowing economy? Can the 2-year yield stay at 90 bps in that case or the 5-year yield stay at 1.6%?  That may be why uber-bull of 2015, Jack Bouroudjian,  said on Friday “Bonds are where we want to be next year“.

On the other hand, Bear Traps Report asked its readers to Sell All TLT on Friday afternoon. Their track record of in tactically trading TLT has been very good.

To quote Kenny Polcari, a floor trader, “this year is shot; no one is making up this year“. If this remains true, then a foundation of seasonal year-end rally would be caput. A more hopeful note was sounded by Lawrence McMillan of Option Strategist:

A timely tweet from a smart trader protected those who listened from jumping in after last Friday’s big rally:

Kudos to Tsachy Mishal. What did he say this Friday? 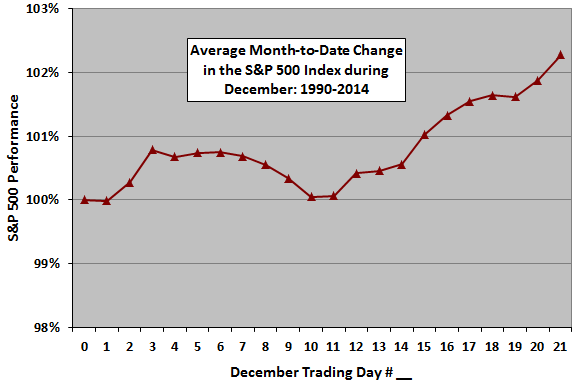 A more detailed case for a rally:

According to his article:

The McClellan Oscillator (a measure of market breadth) is near oversold levels that have sparked rallies in the S&P 500 over the past year.

Lastly, we saw a major spike in fear yesterday looking at the CBOE options equity-only put/call ratio. Spikes above 0.90 have marked some near-term lows in the S&P 500.

What about the bear case? Deflation as discussed above would be the big bear case. 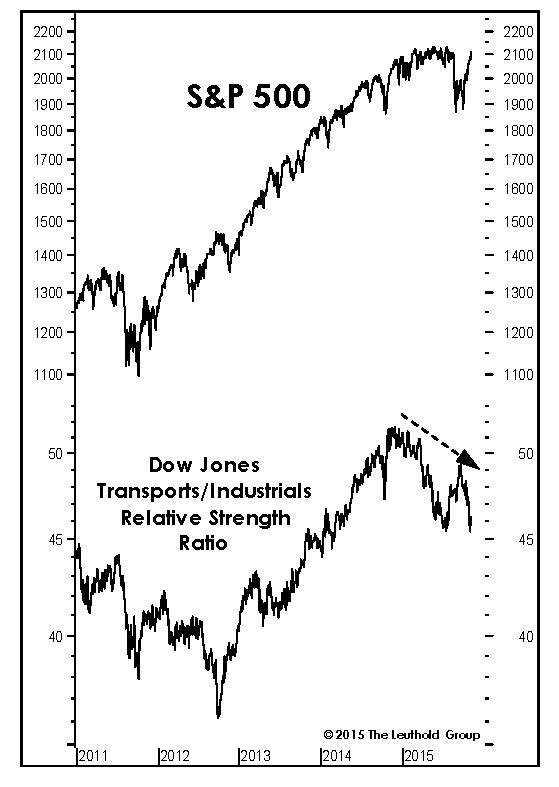 The Dollar peaked on the day of the Draghi announcement said Jeff Saut to Maria Bartiromo on her show this week.

That has to be bullish for Gold, right?

USO & BNO were down 12% this week. Is this capitulation? At least in sentiment it is per: