Just a week ago, we wrote about the curse of the 8th year of a two-term Presidency and asked whether 2016 would be a Happy or Interesting New Year? And look what happened in just one week, the first week of 2016? 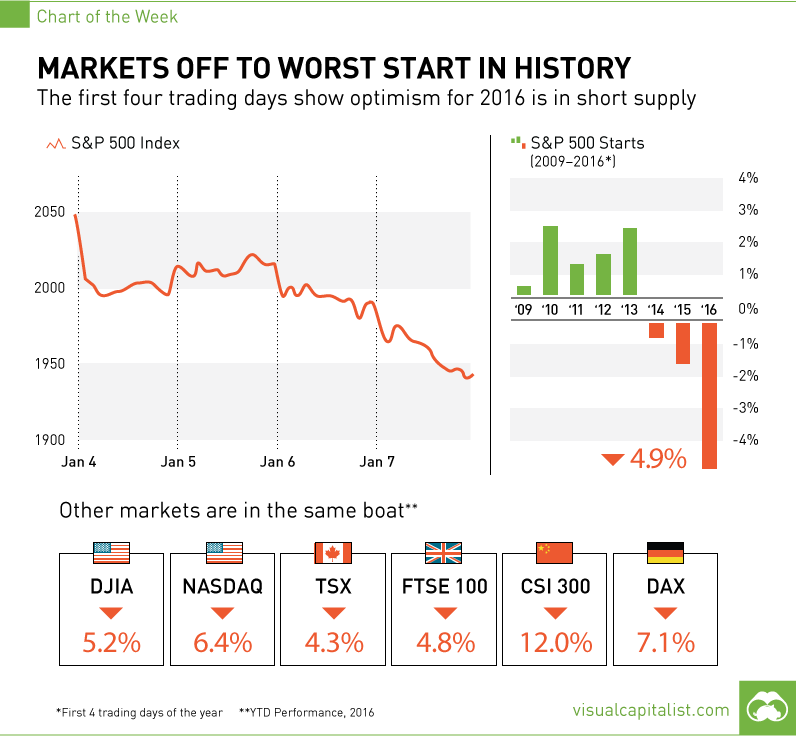 Yes, the worst start of a new year in history! Even 2000 & 2008 did not begin this badly. Speaking of 2008, George Soros, arguably the most successful investor of our times, said this week:

A better understanding of a contagion comes from the human body’s immune system. A biological contagion begins due to a weakening of the natural defenses of the body, its immune system. Slowly but surely, such a contagion spreads by infecting good cells and by using the infected cells to infect more good cells. The spread is quiet, deadly and surreptitious until the final stage.

That is exactly what is happening to the global financial system. We first warned about it on October 11, 2014 in our article A Contagion is Sweeping the World & It is neither Ebola nor ISIS. How did we measure the extent of the deflationary contagion in that article?

We wrote four more articles about the spreading contagion since that first article in October 2014. Look at the steady decline in this indicator, the 5-year interest rate in Germany over that period:

We have become so inured to negative interest rates that we don’t even notice them falling further & further. We look at the 5-year rate because it is a reasonable estimate of the intermediate term. The near term looks worse in Germany – the 1-year rate in Germany is minus 0.40%. Meaning you can borrow money in Germany for one year and they would pay you 0.40% for the privilege of borrowing. How sick are Germany & Europe? And this is despite massive injections of financial liquidity poured into the European financial system by the European Central Bank.

This is why a deflationary contagion is so bad. You treat it, it pauses for a short period to digest this medicine and then begins to spread again.

We focus on Germany because it is an epicenter of the global trade system, the dominant exporter in Europe. And the Europe-China trade is the largest component of global trade. And how bad has that gotten?

According to the International Monetary Fund, the year-over-year fall in global exports is at its 2nd lowest point since 1958. This is the physical havoc of the deflationary contagion, the havoc that is being signaled by the negative & still falling 5-year interest rate in Germany.

And who is Germany’s biggest customer? China.

A contagion doesn’t enter a strong body with a robust immune system. A steady weakening of the immune system is what enables a contagion to enter. So what weakened the financial systems of the world, specifically of Europe & China? It is a four letter word – Debt.

If Debt was a problem in 2008 in America, it is far worse now in Europe, China and Emerging Markets. And when the Debt or asset base of a banking system gets too big for an economy, growth slows, loans go bad and the financial immune system weakens. Europe has been plagued by an overly large banking system laden with bad debts. That is why European financial system went into a crisis in 2011-2012. That problem has NOT been resolved, simply pushed under the rug or its spread has been arrested due to massive injection of financial antibiotics called Quantitative Easing.

But Europe is a baby compared to the worst offender of them all – China. As the well known investor-observer Kyle Bass pointed out this week:

When you get this, you realize why Marc Faber, a globally renowned investor, uses terms like “colossal credit bubble” for China. Actually, Faber is being modest in his hyperbole. The scale of the credit binge in China over the past 15 years is unprecedented in human history and no one can offer any sensible opinions about how this bubble will unwind and what havoc it will cause on the rest of the world.

Remember what happened to the world markets when China suddenly devalued just a bit in August 2015? The fall in 5 days after that was worse than what happened to markets this week. China reversed that decision and began bringing back a portion of its reserves back to China. How has that worked out?

Chinese Foreign exchange reserves fell by over $500 billion in 2015, with more than $100 billion falling in December 2015 alone according data reported by Bloomberg & Reuters this week. And that did nothing to help either the Chinese economy, Chinese trade or Chinese markets.

So something had to change and it did this past week.

What China tried to do this week was stupid. As Jim Rickards, author of Currency Wars, said in a CBC interview this week:

China tried to devalue its currency this week while simultaneously trying to protect its stock market by imposing circuit breakers. Guess what happened – On Thursday, the Chinese stock market fell by 7% in 29 minutes of trading and was shut down by the circuit breakers for the rest of the day. It was utterly stupid prompting the comparison with a 3-year old with a loaded gun. So now what?

The real problem in China is they are fighting the basic law –  a government with a relatively open current account cannot control both its currency & its interest rates. China needs to let its currency go either in an orderly fashion or in a disorderly fashion.

The second is the path that is now being discussed. According to Reuters,

This may actually clear the markets after an initial fall. That is the view of Raoul Pal, editor the Global Macro Investor, who told CNBC that Asian markets could see a rally that lasts awhile. But what impact will such a steep devaluation have on Chinese confidence? And will that shatter the myth of an Omnipotent, Omniscient leadership?

The first path was laid out in Section 4 of our article on September 5, 2015 titled Remember Me? Asks the Contagion:

As we wrote in that article, the QE in Europe & Japan resulted in a decline of 16%-18% in the Euro and the Yen. And it might be easier for the rest of the world to accept a Chinese QE rather than a sudden devaluation of 10%-15%.

But is that really true? Even if it is now, will it remain true for much longer? Because either way, China would be exporting its problems to the rest of the world. Why should the world, especially America, accept that? Europe & Japan are allies of America while China is a major competitor if not an out & out adversary. And this is an election year in which the Republican front runner, Donald Trump, has already called for a 45% tariff on Chinese exports to America.

This contagion in global trade is a clear & present danger to the global economy. And it calls for immediate concerted action by USA, Europe, Japan & China. Yeah, right! This is the last year of a two-term Presidential cycle. And as we discussed last week, there is no bandwidth in America for any serious discussion about the deflationary contagion. At best, it will be left to the US Federal Reserve and at worst it will be used as an excuse by both Democratic & Republican contenders to blame China for damaging the US.

6. Caveat & Remember how a contagion works

Look at the immediate aftermath of our previous contagion articles. The central banks get active and inject financial stimulus to arrest the spread of the contagion and markets breathe a sigh of a relief. We expect something of that sort now. The decline in the global markets has been so steep and severe that it would be reasonable to expect a bounce, especially if China engages in smooth rhetoric & some stimulus.

Such a rally might arrest the contagion for awhile but will not stop its progress. Once a rally runs its course, assuming we get one in the first place, we expect the contagion to come back like the apparition it is.

That would continue to be the case until we solve the underlying structural problem in China, in Europe, Japan & America. One way would be via a World War. The other & only non-military way to eradicate the contagion is to restructure the global debt that is dragging all economies down & simultaneously stimulate via fiscal measures like tax cuts. Ideally, this should be accompanied by a détente between major powers of the UN Security Council.

Unfortunately, this is the last year of a two-term Presidential cycle. The great game is on for the next President & for a new direction for America.

PS: Below are the links to the five prior contagion articles: