The biggest stunner of this week or perhaps this year was the sudden & decisive dovish turn of the Federal Reserve. After steadfastly holding to the prospect of 4 potential rate hikes this year, Chair Yellen, suddenly & without any prior signals that have been the hall mark of the Fed since Bernanke, dropped this number from 4 to 2. This came 4 business days after Draghi went farther than what markets had expected & priced in. And Yellen’s stunner came despite the visible increase of inflation this week. 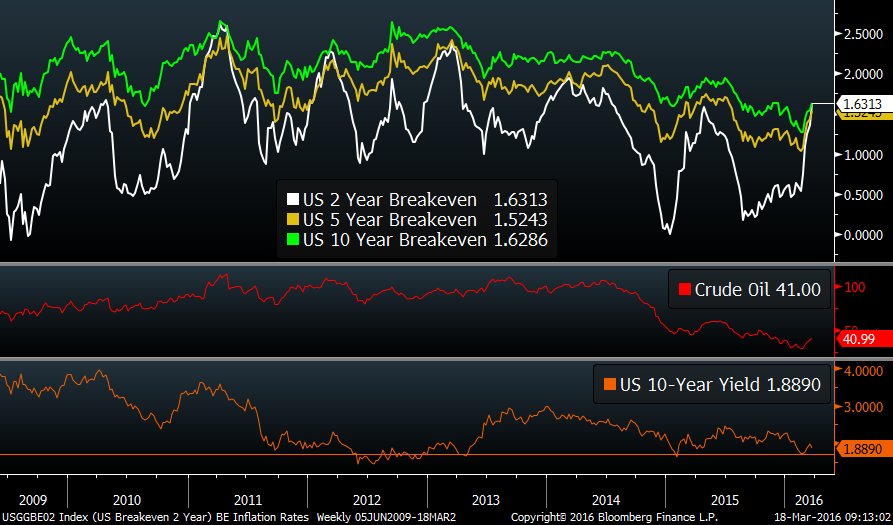 So what made Chair Yellen perform such a u-turn and stun the markets? Yields across the 2-5 year Treasury curve fell and kept falling until the close of Friday – a fall of 14-18 basis points. The Dollar fell by 1.4%, Gold & Gold Miners exploded and so did stocks – the Dow rallied by 380 points during the 2 & 1/4 days after the Fed stunner.  And the 30-5 year yield spread steepened by 9 bps this week, the clearest & loudest statement that the markets consider Yellen’s declaration as unabashedly stimulative.

What gives? We all know that the biggest risk to the global macro environment is the prospect of devaluation by China. Neither US nor Europe want to lose the gains in the markets achieved at the cost of trillions of QE because of turmoil resulting from a Chinese devaluation. So was a deal struck at the recent G20 between China, Europe and the Fed to increase stimulus in the west in exchange for Chinese holding to the current band of the Yuan?

According to the article:

Joachim Fels, an advisor to Pimco, went beyond the “rumor” designation in a Bloomberg article:

Another school chose to go directly to the intended result – to weaken the currency:

Either way, will Chair Yellen actually go thru the 2 Fed rate hikes she mentioned or, as we have argued, is the Fed done for 2016? It seems Art Cashin of the “0% before 1%” forecast came over to our side on Thursday when he said on CNBC SOTS “I think they will be be lucky to raise rates one more time this year – I doubt if they will“.

That fits in what Ellen Zentner of Morgan Stanley said on BTV on Tuesday – “we have already seen the peak for the year – that is a very important point – 1.7% core PCE in January was peak of the year“. And:

Because, as the article said, “the Fed’s December rate increase looks increasingly like a policy mistake that may have to be unwound, rather than augmented“

How did global bond markets react to the Fed? The German 30-year yield fell by 17 bps this week & decisively broke thru the 1% support. 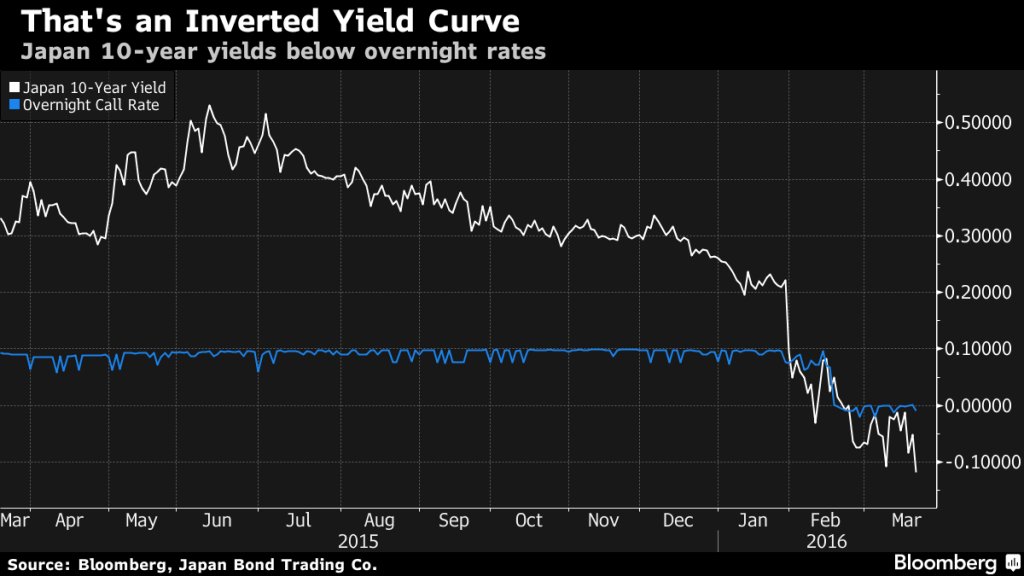 As we write this, CNN is discussing the increasing attacks by President Obama against Donald Trump & that led us a conspiratorial thought – President Obama knows that he became President because of the spectacular bust of the housing bubble & Lehman in the fall of 2008. There is no doubt that he will do everything he can to make sure that global financial markets don’t crash this year. And what could be the most likely cause of a crash? China. Is that why Secretary of Treasury Lew participated actively in the discussions in the G20? 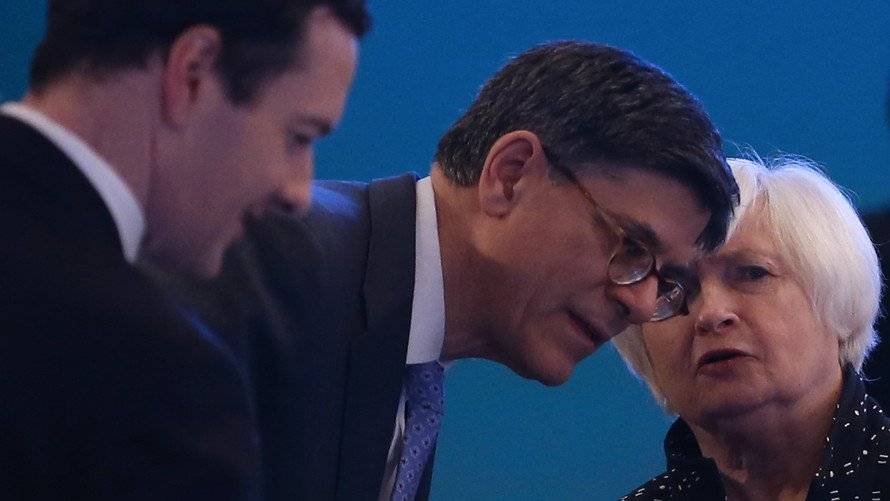 Emerging Markets, commodities and risk assets in general do best when the US Dollar is weak. That is EM rallied so strongly as the Dollar weakened after the Yellen stunner on Wednesday. In fact, the rally in EEM was twice as strong as the rally in the SPY this week. The Dollar has been weak all month and that has meant: 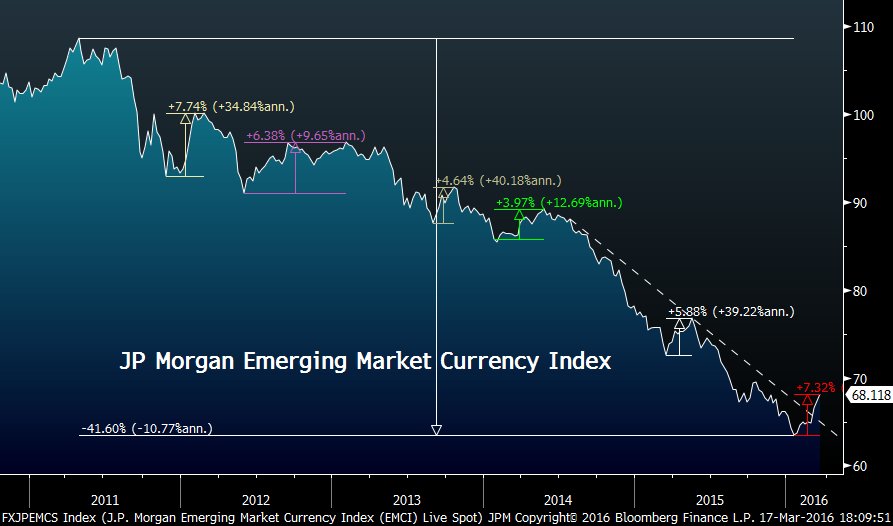 Wouldn’t be ironic if Yellen’s stunner actually leads to some sort of a bottom for the U.S. Dollar?

What if the Dollar does find a bottom and reverses the decline of recent weeks? Will that mean the rally in risk assets will reverse as well? And what assets are most linked to a weak Dollar?

A couple of weeks ago, smart veteran technicians and analysts like Tom DeMark and Tom McClellan argued for a reversal in the stock market rally in early March. But, as we have seen since the launch of the first QE, the models of such gurus fail in the face of waves of liquidity injected by central bankers. We saw that last week with Draghi and we saw during the 2 & 1/4 days of this week post-FOMC. But that doesn’t mean everybody likes it:

That has been exacerbated because of the low positioning of equity investors:

That is essentially what Marko Kolanovic of JP Morgan said this week about the rally:

How light are positions of large investors? 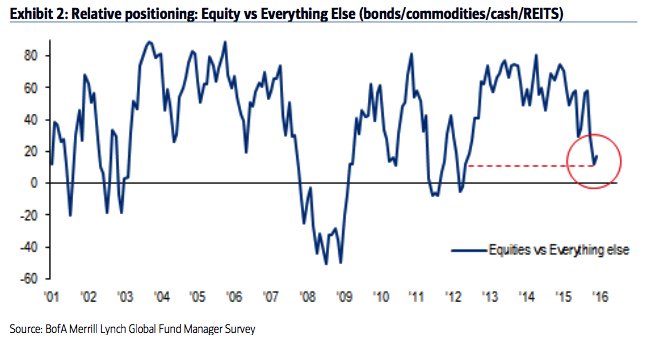 So how far can this rally run? To S&P 2200 by summer according to Jim Paulsen of Wells Management and,

Caroline Boroden, a colleague of Jim Cramer, said in February that the double bottom around 1810 was an important bottom and that, in her opinion, the rally could even get to a new high. But such a big move is neither vertical nor uninterrupted. In fact, Boroden sounded a cautionary note on Thursday evening:

She spoke about time & price resistance and cautioned “we are getting to extremes where we have to watch for a possible failure”. 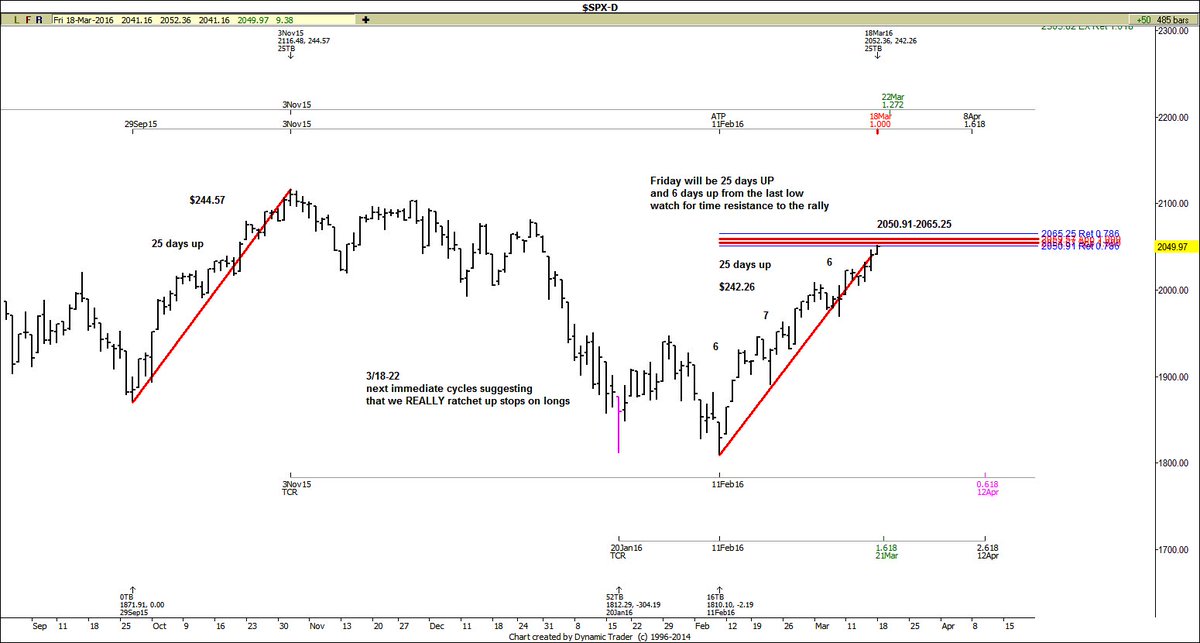 First the near term:

What about the long term?

And where could Gold go according to the MarketWatch article?

As Marko Kolanovic wrote “over the past week, oil short-term momentum turned positive (1M and 3M), which led to CTA funds closing most of their shorts“. He added this “one of the most profitable short positions for momentum investing, and we think this trade is over“.

How big was the trade? 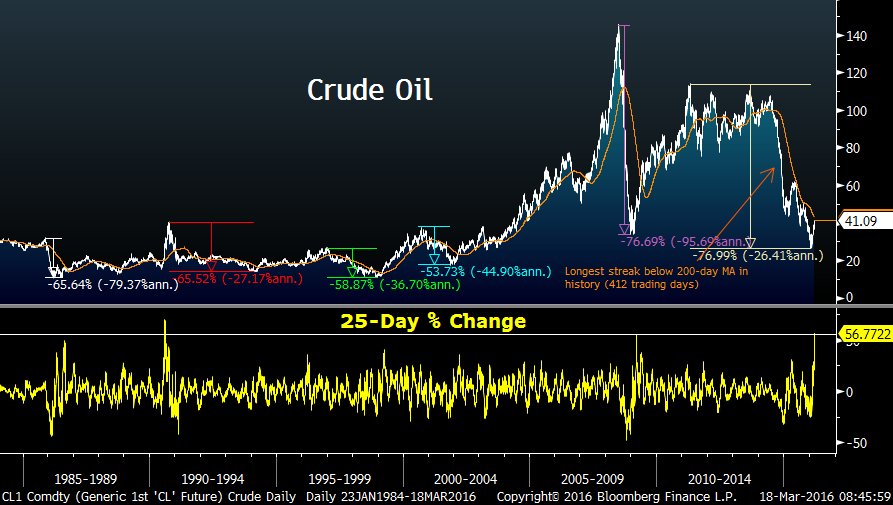 Kolanovic added “We have called for Oil to outperform the S&P 500 this year (YTD it outperformed by ~5%), and we expect this trend to continue, especially in H2“.

But the action on Friday afternoon suggests a reversal in price action of oil, the 1st such since February according to CNBC’s Guy Adami. He added that OVX, the Oil volatility index, bottomed yesterday. That is also the message of :

But what about the relationship between Oil & Energy Stocks? 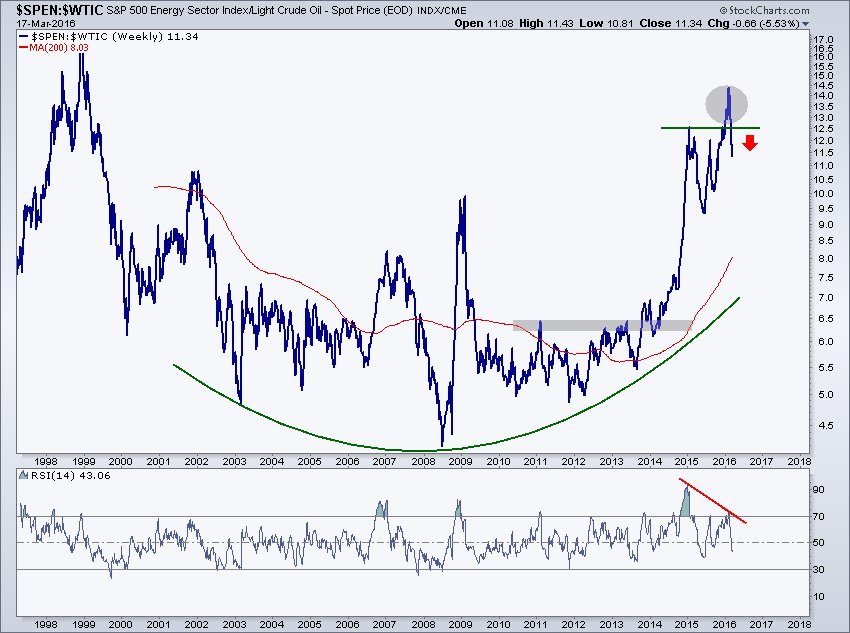