Remember the cry of the 1980s? The caricature of American economy as burger-flipping service sector jobs in contrast to the Japanese who were portrayed as modern long term managers? Very few people understood then that American companies were perfecting the art of consistent & bankable delivery of performance standards all over the world regardless of local culture & tastes. Go anywhere in the world today & you find McDonald’s with the same standards of basic excellence delivered in the same trust-enhancing manner.

There is a similar & equally successful story in Hotels. We have been fans of Marriott hotels since the days we traveled on business 3-4 nights a week. Regardless of what city we were in the USA, we could count on Marriott for lovely hotels & lovelier service. The people of Marriott were the same regardless of the particular attitudes of the city, always pleasant, courteous & helpful. More recently, a front desk staffer at a Washington DC area Marriott gave us her personal cell number when we were concerned about an administrative request we had made for a friend. She said she lived 10 minutes away from the Marriott and she would get to the hotel, on a Saturday evening, in case our friend faced a problem. We were blown away by this personal courtesy even though we have been used to such service from Marriott staff.

But isn’t Marriott All-American? When you travel to places of historical grandeur, you do want to stay at places that embody that culture, don’t you? But what if you get absolutely authentic historical grandeur with traditional Marriott service & care? Then you get a treat for the senses, an experience you want to write about. An experience at Boscolo hotels in Venice & Rome, members of the Autograph Collection of hotels in the Marriott family.

Venice is a city that can graciously charm your senses as well as assault them with the madding crowds that throng the Grand Canal & St. Mark’s Square. Mixing with the crowds is wonderful in itself but you do want a quiet enchanting experience after you are done with the crowds. We found a perfect mix of both at the Boscolo Venezia, the ancient seat of the Rizzo-Patarol families.

The Patarol family constructed the building in the Sixteenth Century, and the noble Rizzo family, extinct in 1833, inherited it. Before becoming today’s 5 Star Boscolo Venezia, it served as embassies of France and Savoy. And before that, it served as a monastery. That serene calm still pervades the place. You can actually walk to the hotel in about 15 minutes across the Jewish Quarter & then via small bridges & narrow lanes if you can master a couple of Italian phrases to ask local shopkeepers for directions. The front facade of the hotel & the entrance is so beguiling simple that we actually wondered whether this was actually the 5-Star Boscolo. Then you enter to see a luxurious lobby with murals on the high walls. But that is just a glimpse into its real charm. At the time of its construction, the Foundation Madonna of the Garden was the only area to be cultivated in all of Venice; so the building was enhanced with an ample garden, a true rarity. According to the hotel, the Boscolo Venezia is the only Venetian hotel with a private green area of more than 2000 sq.m. At the other end of the garden & right on the edge of the water is a small set of rooms that overlook the lagoon. If you are lucky enough to get a room there, you can wake up to: You can relax in the sitting room of that intimate place and look at the lagoon or the garden. And you can take the complimentary water shuttle to the pier of San Marco located at the entrance of the Grand Canal & adjacent to Piazza San Marco or St. Mark’s Square. This 30-minute ride across the lagoon is just lovely. You get a view of Venice & its landmarks from the water, a view you simply don’t get from any gondola & sightseeing trips. A lovely & true feast for the senses.

If Venice charms, Rome awes you with its grandeur. The seat of the most powerful European empire of an bygone era. You can be a part of the ancient Imperial Rome by staying at the Exedra whose name evokes memories of the old name of the square. The name has its origins in the grande esedra inside the spa area of Imperial Rome, on which today’s Piazza della Repubblica was planned.

The Boscolo Exedra Roma, an extraordinary refurbishment of a magnificent late 18th Century palace, is located between the Baths of Diocletian and the Basilica of Saint Mary of the Angels designed by Michelangelo. In fact, the hotel’s business center is suspended over ancient Roman excavations, the remains of the important Diocletian Baths (298-305 CE). The Piazza della Republica is also central. You can literally walk to the Trevi Fountain, Spanish Steps, the Pantheon, Piazza Navone and other sites. Perhaps, by fate, the classic film Ben Hur was playing on Italian TV the day we went to see the Circus Maximus on Palatine Hill. So we could visualize the chariot races that Ben Hur won 5 consecutive times before going back to his home to face Messala in that race to the death. 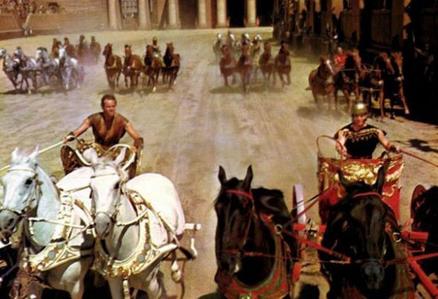 The point is that the true spirit of Rome is imperial and you have to live like an emperor to feel it. One effortless way to do that is to stay in the luxury of Boscola Exedra Roma where every wish, including a simple request to housekeeping, is answered in minutes. The only thing missing was a chariot with 4 white steeds to drive us around. But then we could imagine, couldn’t we?