Tim Seymour of CNBC FM said Chair Yellen was “as hawkish as Yellen has ever sounded” in her conversation with Harvard’s Greg Mankiw on Friday.  That may be because no one has ever heard Yellen being hawkish. All we heard was that rate hike “may be appropriate in the coming months“. Gundlach was wrong in his guess that Yellen would sound dovish but he proved correct in his last week’s email comment to BTV:

That was the clear impression Yellen left in her remarks. A good succinct expression came from:

But a rate hike in the next few months is not the story. What is important is how Treasury traders act on what they heard. Rick Santelli was his usual explicit & smart self on Friday afternoon:

Simply stated, data dependency is analyzable & therefore actionable. Speculating on intentions of the Fed is neither. Secondly, raising only one more time to 50 bps is not “normalization” in any one’s lexicon. So what do traders do? Do they price in a series of rate hikes if the data remains at current level or gets stronger? Or if data doesn’t get stronger or turns a bit weaker, do traders bet on Fed making a mistake and flatten the curve? Are Yellen & Co. trying to create the volatility they hate or are they so sick of being trapped?

The Treasury market closed early within a short time of the end of Yellen’s speech. Very few would have wanted to carry large positions into the Memorial Day weekend. So we have to wait for next week for both a real reaction and, of course, for the mother of all economic data.

We ourselves are still unconvinced that Yellen will actually raise rates in June. She is a smart cautious leader and we think, if the markets do her work for her, she will find an excuse to not raise rates in June and settle for hawkish words that people will interpret as a July hike. But we will change our minds if next week’s NFP number forces her hand the way the December 2015 number did.

The fears seemed to dissipate one by one this week. The new survey showed “Brexremain” comfortably leading “Brexit” and the IMF forced the Greece deal through. And the sentiment numbers fell to levels that suggest a real rally: 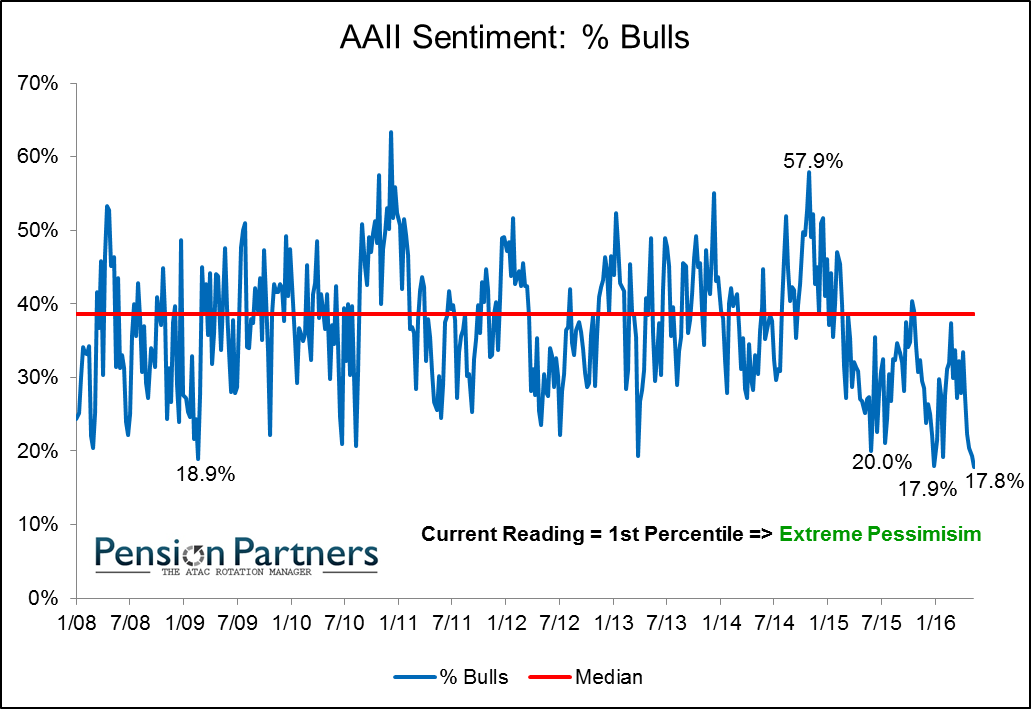 What is going on? Such extreme levels of pessimism so near to an all-time high? And volatility seems getting wrung out like a nearly used up toothpaste tube? Is this “good” low volatility like a “good overbought” condition? It has certainly encouraged big upside targets like S&P 2,250 by July from Mark Newton on CNBC Closing Bell on Thursday. Newton does think the market is somewhat overdone here and says buy on any near term dip you get.

Those looking for a new breakout overseas may look at: The first rains of the season hit Mumbai yesterday, earlier than usual. Hopefully, it is a sign of a good monsoon that India needs badly.  Also India signed the long awaited deal with Iran to develop the Iranian port of Chah Bahar. As the adjacent article points out, this deal has potentially big long term consequences for Indian Ocean trade, perhaps at the expense of China. That possibility has encouraged Japan to provide financing & America to support it despite the remaining sanctions on Iran.

Last week, Chris Kimble asked whether the triple resistance of Silver suggested a potential meltdown point for Silver & Gold? What did he say this Friday?