Even David Axelrod, the winning strategist for President Obama, admitted that this week’s Democratic Convention was better & more effective than his Obama conventions. Hillary Clinton was effective in her speech even though as Axelrod said, “she did not give a great speech tonight“. The speech was well constructed to appeal to everybody from right wing Republican neocons to the war-hating Sanders crowd.

Hillary Clinton did not have to give a great speech. She had two great speakers who did that for her – Bill Clinton and Barack Obama. This was one occasion when Obama outclassed Bill Clinton. In fact, President Obama gave an amazing speech, a speech that Newt Gingrich called the best speech of Obama’s career. It was a rousing celebration of Brand Obama, a brand that is greater than his presidency. It was an exhortation to the Obama coalition to go over to Hillary Clinton with fervor and commitment.

And Donald Trump is the purest & most authentic Anti-Obama. So his victory in the Republican primaries was easy to see and bet on as long as he maintained some discipline and ran effectively. Trump won the largest number of Republican votes in history during his primary campaign. In doing so, he has established Brand Trump as the most authentic brand of this campaign, a brand that has given him a rock solid foundation of core support.

Our view has been that the most important factor in a post two-term election is the brand of the sitting President. That was so in 1988 and in 2008. It was also the case in 2000 when George W. Bush ran with a vow to bring back morality to the White House, a direct campaign against Brand Clinton that had been sullied. So you cannot look at the 2016 election without examining the state of Brand Obama & the Obama coalition.

1.Two aspects of Brand Obama – How will they converge?

One aspect of Brand Obama is a society with enormous chasm between the globalized elite segment and the 80% whose incomes are stagnant; a society in which a record number of Americans are on food stamps; a society in which police are targeted & killed. The majority of American people, 70% of them, say that the country is going in the wrong direction. Only 24% are willing to accept the current direction of the country. This is so bad that Brand Obama should be on the verge of getting discarded, right? This should be game, set & match for Donald Trump, the Anti-Obama, right?

No because of the other aspect of Brand Obama. It is a unique brand with unique strengths. It is about the man – the tall, handsome man who has brought dignity & grace to the White House, the orator who speaks to the best in us, a desire to rise above the petty, the mundane to a genuinely blessed humanity. When he speaks that way, as he did at the DNC, his coalition feels like saying Hallelujah. That is why his personal approval rating has risen to 52%, a high number indeed.

This gap of 28%, between 52% who approve of him and only 24% who approve of the direction in which he has taken America, is unsustainable and should resolve one way or the other. At least so said perennial Clintonite Paul Begala on CNN.

How this disparity resolves could be a deciding factor in this election. What new events could lead to a resolution? The 2008 election finally resolved when the financial crisis hit front page with Lehman. So will it be a major financial event, will it be a clear “economy stupid” realization or will it be a major terrorist attack?

The reason we bring this up now is because the 24%-52% gap in the two aspects of Brand Obama is common & endemic to the Indian electorate. Both Paul Begala of CNN & Sean Hannity of FOX find this very hard to understand and keep looking for the gap to converge. The only TV man who gets it is CNN’s Van Jones who described it in the language of Black Churches all over America – “Hallelujah Anyhow”.

The “anyhow” refers to, as we understood it, the current state of the Black community in America – poverty, lack of opportunities, mistreatment and so much else. But the Hallelujah is used to transcend all that to joyously celebrate the enormous pride of the Black community in their first ever Black President, a man & his success that embody the dreams of an entire community. The undertone of the Hallelujah Anyhow is the call, the determination to support Barack Obama anyhow, despite the realities of today.

And this is not just limited to the Black Community. It carries over to the second largest race in America,  Hispanics & Latinos. They can celebrate the success of a Black American, especially Barack Obama, and embrace the Hallelujah Anyhow pride.

We have seen this in India for years. Politicians who rose from the lowest strata of Indian society created the same intense pride in their communities who didn’t care about their failings or mismanagement. All that mattered was the enormous sense of pride in seeing one of their own at the top of the power chain. Opponents kept telling the electorate about the personal corruption, the visibly enormous mismanagement. The response was the same – she is ours; let her screw up the way your leaders have screwed up. This is still true of 3 different women leaders in three different states in three different regions of India.

This electoral reality is now America’s. That is why Hillary Clinton speech was so inclusive. What is another way to describe it?

Welcome to Indian electioneering. The Democrat party has embraced it. Another major component of Indian & all Third World electocracies is the outspoken presence of a globalized elite. The globalized elites of America have become very wealthy & powerful during the Obama Administration. Today you couldn’t find a TV anchor who isn’t a millionaire; you couldn’t find “intellectuals” who haven’t made far more via think tanks & political action committees than their pathetic counterparts who toil away in real jobs.

The Hallelujah Anyhow passionate pride of the poor minorities combined with the cynical self-serving power of the globalized elite segment of the majority is the Obama Coalition as it has been the winning coalition in Indian politics for decades.

The Hillary campaign is betting that this coalition will succeed in November 2016 as it did in 2012 and put her in the White House. That is why her speech was structured so and why the convention was a big success within the Democrat coalition.

But when does such a coalition fail? When enough segments of the majority have finally had enough and they coalesce in anger and desperation. That happened in India in June 2014 and much more importantly it happened in Britain in June 2016.

The Democrat convention featured a steady procession of big shots, muckety-mucks, luminaries from various fields who kept shouting at the electorate to vote against Trump, who kept warning of horrors & calamities that would ensue if Trump got elected.

Doesn’t that remind you of the Brexit campaign in the UK? Every big shot, every luminary lectured to the English people about the horrors & calamities that would befall them if they acted stupidly to leave Europe. They kept dumping insults & abuses at Boris Johnson, the Trump-like leader of the Brexit campaign. They even brought President Obama to lecture to the English people. He threatened to banish them to the end of the line if they voted for Brexit. All the minorities & the globalized Euro-Brit elite of London were stridently passionate about staying in the EU.

Did all of this backfire? Did the ganging up on Boris Johnson backfire and create empathy for the lone warrior? Were the non-elite down-home English people absolutely fed up with what they had endured for the past decades? We don’t know. But we do know that the core majority of England came together and voted for change.

Brexit shows how the core majority of a country can come together and defeat the coalition of minorities & the elite segment of the majority. That only happens when the frustration reaches a crescendo and the desire for change becomes paramount.

Is the core American majority there at this time? How does any one measure that? Do people exhibit their inner passion to surveyors? The whispered story behind the Trump success is a deep reservoir of silent, even diffident, support that hardly expresses itself. Will that support swing decisively towards Donald Trump or will it splinter up and help Hillary win?

The odds are against a Trump win demographically speaking. But the odds against Brexit were greater. Everyone has ganged up on Trump, everyone from the Democrat left to the Republican right. That may work in Trump’s favor. What he needs to do is come out swinging in support of the neglected & discarded core majority in America and keep doing that with passion & discipline over the next 100 days.

There was another hidden factor in the Brexit race, a factor that became visible after the Brexit win. That factor was captured in the tweet below: 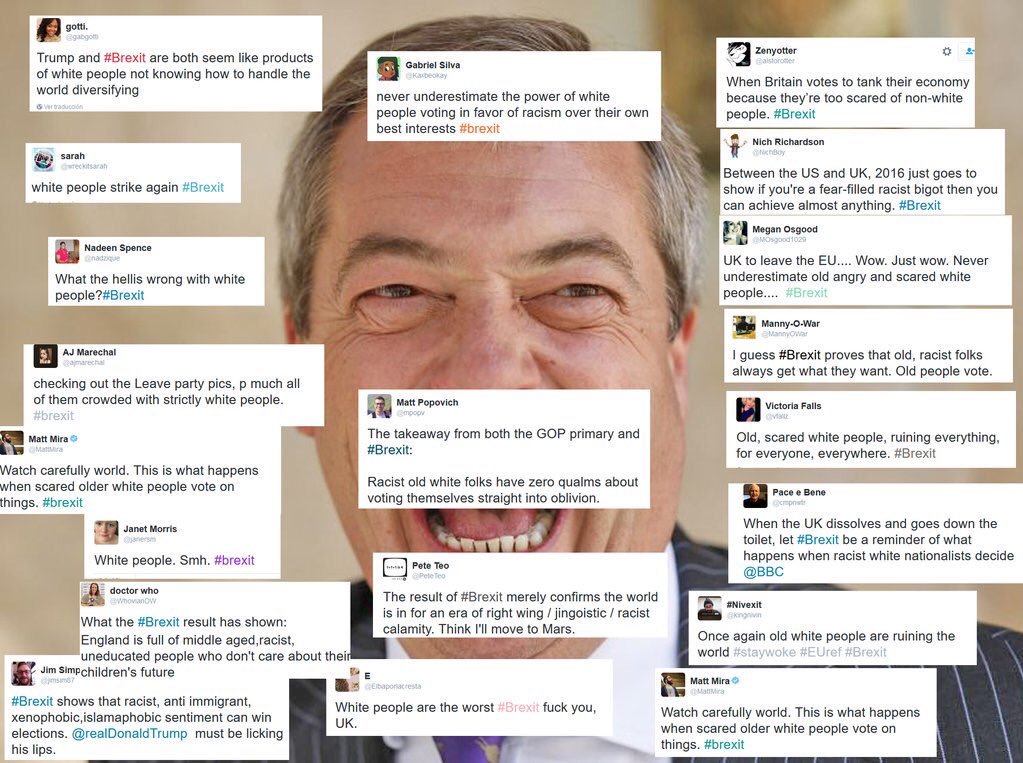 4. Reverse Racism at the DNC?

We remember reading this tweet, seeing the image with amazed horror. Utter contempt about race, ethnicity & class exhibited in the open with passionate hate. If you were native core English, would you not recoil with horror and would you not vote against this crowd with passionate anger? Did the English people, the “old white people” of England, feel this and revolt against it? Have they been subjected to this intense reverse racism for years?

We bring this up because we instinctively felt an underlying strain of reverse racism at the Democrat convention. We first felt it in the raucously worshipful reaction to the excellent speech of First lady Michelle Obama. When we heard her words about children and the need to bring them up the right way, we kept thinking back to the week before; we kept thinking about what the Trump kids showed the entire nation.

We felt the same in media’s completely contemptuous treatment of Melania Trump and its stark contrast to the total adulation of Michelle Obama. This sort of reverse racial contempt now seems ingrained as the new social norm inside the Democrat party and in MSNBC, CNN et al .

We are neither Black nor White. We confess we really don’t have a finely tuned ear to the hidden or underlying sensibilities of the Black-White relationship. As fans & students of Mahatma Gandhi, we may have a natural empathy for those who have been victims of racially differential treatment. So if we sense a strain of reverse racism against Whites, what do the Whites, especially the core non-elite White people sense?

If they do sense something like that, how do they feel? And if they do feel something, how will they react to it in the voting booth?

A simple act like that might have taken out the sting of the reverse racial contempt underlying the Democrat convention and it would have gone a long way towards improving her favorability ratings.

Now the race is on. Isn’t this game fun?