Most have read the famous quote from Shakespeare’s Julius Caesar “There is a tide in the affairs of men … “. The last line of that quote says “we must take the current when it serves … “. Donald Trump took the current and it led him to a Presidential Summit in Mexico with Mexico’s President, something very few people could have imagined even a week ago.

It was, as George Friedman of Geopolitical Futures put it, “a beautiful example of a zero-risk, high-reward maneuver“. As Leon Krauze, an award-winning Mexican journalist wrote in the Washington Post, “Donald Trump’s trip to Mexico was a resounding success“. Krauze explained:

But why did President Nieto of Mexico invite Donald Trump and give him that stage? George Friedman explained in his article Trump Goes to Mexico:

The reality is that a cancellation of NAFTA would be an existential risk to the Mexican economy. According to a CNBC report, Mexico is an export economy with “78% of their exports going on America. US companies have invested $101 billion in Mexico post-NAFTA“. No wonder the Mexican government has already accepted the idea of renegotiating NAFTA, a key Trump demand.

Trump met a huge test of Presidential expertise by getting Mexico to to come around to the American position with skill & deftness. He did so by that triangulating, an art made famous by President Clinton. He made illegal immigration a joint US-Mexico imperative by highlighting Mexico’s own illegal immigrant flow from South America. He linked stopping the flow of drugs to the United States with stopping the flow of guns from the United States to Mexico. And he made trade a joint US-Mexican issue by triangulating it against China and stating that the North American hemisphere should unite against China.

Trump was polite, respectful, and even charming to his host. And he stuck to his positions and got the host to acknowledge his views. It was pure Presidential just like President Clinton at his peak. Trump stuck to his plan of building the Wall but, in a demonstration of his art of the deal, ignored Nieto’s assertion that Mexico won’t pay for it. 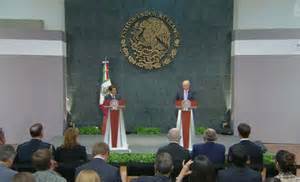 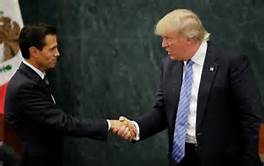 Then the Trump campaign almost gave it all away back in America. First & foremost, they showed that they don’t understand how dedicated CNN is to damaging Trump in every way it can while appearing to uphold journalistic fairness. No one cares about MSNBC but CNN earned some reputation for fairness in the Republican primaries. Secondly the Trump campaign showed that they don’t still have a smart media team to force CNN to get cleaner.

Look how CNN made a vice of Trump’s virtue. Everyone knows that the first step in any negotiation is to dismiss the claim for money. So President Nieto was obliged to say publicly that Mexico would not pay for that wall and that he told Trump that. Everybody knows Mexico will pay for it in one form or another So it was smart of Trump to ignore Nieto’s initial claim and let him gain some face.

But CNN, in its role of serving the Hillary campaign, kept saying Trump failed because Nieto didn’t agree to pay for the Wall. The best response from the Trump campaign would have been a steady stream of humorously sarcastic rejoinders about CNN’s dumb position. They could have even shown previous statements of CNN Chairman Jeff Bewkes rejecting a position only to accept it afterwards. After all, CNN cares much more about CNN’s image than they care about the Hillary campaign. But the Trump campaign let this CNN charge remain unanswered for an entire afternoon. Unfortunately that was the smaller mistake of that day for the Trump campaign.

The Trump campaign has to win back some of the people who went away from Donald Trump during the post-convention mess, people who dislike Hillary but felt that she was the less bad choice. They had begun doing so via Trump speeches of last week which were laser-focused on reaching out to the African-American & Hispanic voters by promising them a better economic future. All last week, Donald Trump kept reminding people why they disliked Hillary and he was aided in that by the news flow about Hillary’s emails. And his demeanor & grace in Mexico was a great step towards removing the cloud of “temperament” that the Hillary campaign had placed on his head.

The stunning success in Mexico should have persuaded the Trump campaign to modify the speech they had planned or at least modify the tone & demeanor of Donald Trump in the delivery of that speech. It should have been retoned as a victory speech for the Trump vision, the Trump art of the deal. They should have let Donald Trump tell his audience how he can finesse the opponent to get everything he wants as well as bludgeon him.

They didn’t need to recast the Trump five-point plan. But they should have presented it as a winning strategy for American workers, a strategy that even Mexico has come around to accept. They should have presented it as a win for Hispanic & African-American workers in America because of his success in getting the Mexican government to renegotiate NAFTA. They should have let Donald Trump tell the people look how he is dedicating to winning for them; to ask them to imagine how well he would do as President if he already did so well in Mexico as a candidate.

The old adage of war is to make sure that every tactic has an alternative and every alternative has a backup. Unfortunately, the Trump campaign doesn’t have fast reflexes and they had not prepared alternative messages to take advantage of a resounding success in Mexico. So they missed a big opportunity to let Donald Trump project a winning Presidential charm in his speech, an opportunity to present a Reagan-like Trump.

We understand the need for the Trump campaign to reassure the Laura Ingrahams & Ann Coulters of his base. But these wonderful ladies & their supporters are more hungry & much more desperate for a November win from Donald Trump. They are far more interested in the substance of the Trump promise on immigration. That could have been better achieved by the substance of the speech delivered via Presidential poise & charm that by a verbosely strident call to arms.

Let us be clear. The substance of the speech was fine. It was a smart approach focused on the art of the possible. Everything the speech promised to do could be done quickly & effectively. There were suggestions in the speech about a real change to the mass immigration vision of the past 50 years towards a talent-based & need-based immigration policy. The problem was letting Donald Trump get swept away by the emotions of the crowd into a raucous delivery instead of Donald Trump controlling and managing the crowd with his leadership. The problem was raucous stridency instead of measured strength & grace.

But luck may be on his side at least for now. The new revelations from the FBI on Friday evening should enable the Trump campaign to keep the focus on Hillary and not on him. The ball is in their court. They have to take it and march down the field with the smarts, deftness & agility of Trump’s friend Tom Brady. This is the 4th quarter folks.