1.Not about the Fed at all?

So all the talk about Fisher, Rosengren, Brainard was for nothing? That is too much of a jump. After all Dr. Brainard played a major role in taking down September rate hike expectations to low single digits. The supporting role was played by weak retail sales/industrial production and by worsening sentiment. David Rosenberg gave voice to the weakness on Friday:

What about wages, the metric dear to Chair Yellen’s mind?

Why would the Fed even consider raising rates in such an economy and with the election drawing even closer? The short end of the Treasury curve agrees. The 5-year yield fell 2.5 bps this week with the 3-year & 2-year yields falling by 2 bps & 1.6 bps resp.

So where is the nerve of markets? What created the maximum fear this week? It was the awful 30-year Treasury auction on Tuesday. Look at what happened when the results were announced a little after 1 pm on Tuesday and then look at the double bottoms/tops just after 3 pm.

VIX reached its peak of the week around 3 pm on Tuesday and closed the week down 12%. Kudos to those who sold vol on Tuesday afternoon:

The weekly peak in volatility on Tuesday afternoon suggests to us that the nerve of the markets lies in investor appetite of sovereign bonds, especially long duration Treasuries. We know that the 40-year JGB has been shot in the last few weeks. We know that German Bunds have been hit hard as well. But the safety of the world lies in stable appetite for 30-year US Treasuries. Because if investors turn their backs on the long end of the Treasury market, then goodbye to Market Chips.

What is the asset class most sensitive to bond appetite? Emerging Markets. So look at when emerging market equities (EEM) & sovereign debt (EMB) bottomed this week.

We are reasonably sure the FOMC will do its part. Why? Because we trust Chair Yellen to favor discretion over valor. So why only “reasonably” sure? Because she faces a few Don Quixotes in the FOMC and because they all, including Chair Yellen, would love to raise rates next week to prevent another broadside from Donald Trump on Monday, September 26. However, a big sell off following a surprise rate hike on Wednesday would give much greater ammunition to Mr. Trump to attack the Fed. So we are reasonably sure Chair Yellen will do nothing and even speak dovishly on next Wednesday.

The real question is whether she will coordinate her message with BoJ’s Kuroda. Because the real danger to all global sovereign bonds lies in the market’s reaction to the BoJ meeting also on September 21. We have no clue and nearly zero empirical experience in the JGB market. So we make no comments about what Kuroda-san will say or do or how the Japanese bond market will react to that.

That brings us to the unique & pronounced action of the Dollar on Friday relative to the other asset classes:

DXY acted like the others until late Friday morning with its peak at about 3 pm on Tuesday and then baboom! What’s up with that?

A brave soul stepped up during the tumult on Tuesday afternoon:

The positioning of some buyers seems suggestive of a bounce too:

Technicians like Mark Newton & Jeff DeGraff spoke against the guru-consensus that the lows in Treasuries are in. Paul Singer explicitly told the “Delivering Alpha” crowd:

Jeff Gundlach has voiced a similar opinion with a target of 2% for the 10-year by year-end. That, as we understand it, was based on the Fed raising rates on Wednesday, September 21. Singer’s comments about inflation and the several warnings by Pimco about inflation seemed to come true this week with the PPI & CPI numbers. But, lo & behold, 30-year Treasury yield fell by nearly 4 bps on Friday instead of rising. What do they say about markets that don’t rise on good news, markets being the long duration Treasury yields?

What about credit spreads? 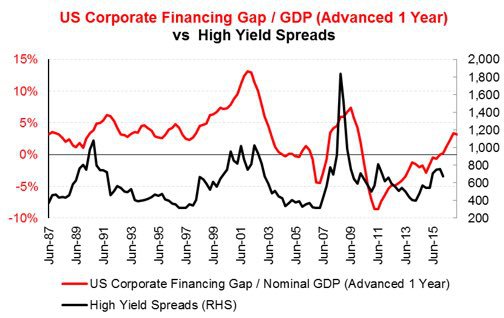 Another way to say this is:

We recall two prior Septembers when this trade worked with very different results:

The big difference between both these years and now is the overwhelming reliance of both Stocks & long duration Treasuries on continued liquidity from not just the Fed but from the trio of Fed, ECB & BoJ. As we have seen this week, lack of appetite for long Treasuries creates an air pocket below stocks and credit.

So for the Bill Miller trade to work, the economy has to get into a higher gear and high yield has to rally. The economic data seems to be weakening and, as Tom McClellan points out, the A-D line of high yield bonds is breaking a long uptrend.

A prerequisite for the Bill Miller trade would be subdued volatility. That brings us to: 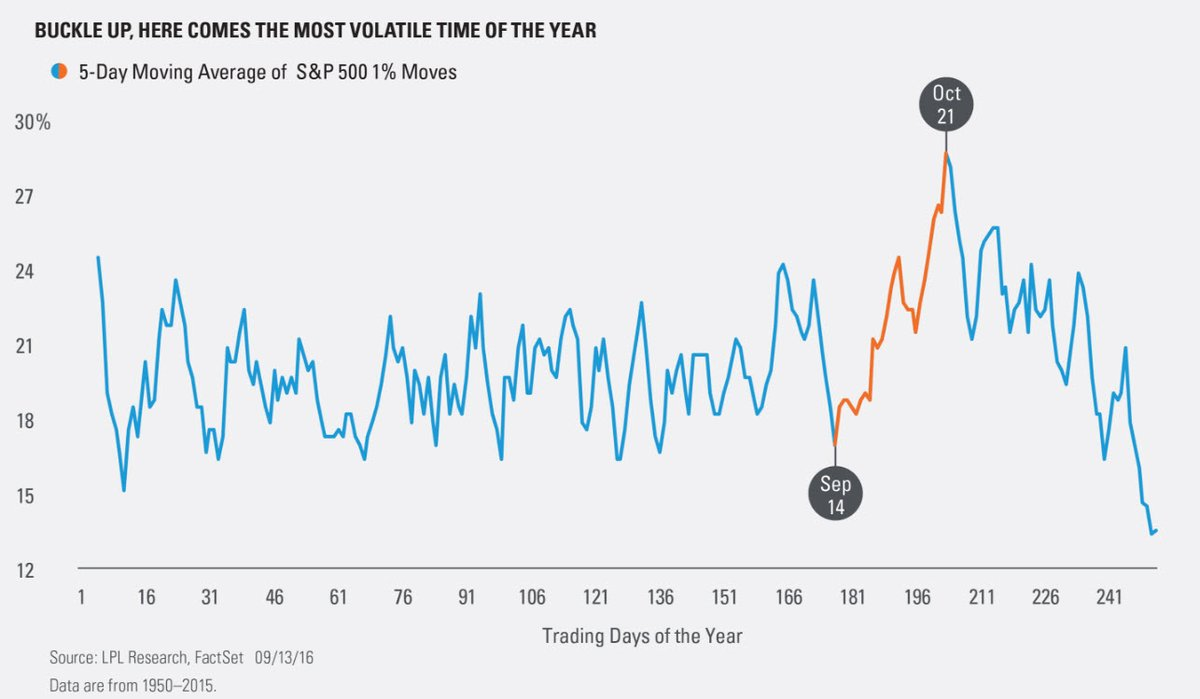 Then you have seasonality:
On the other hand, 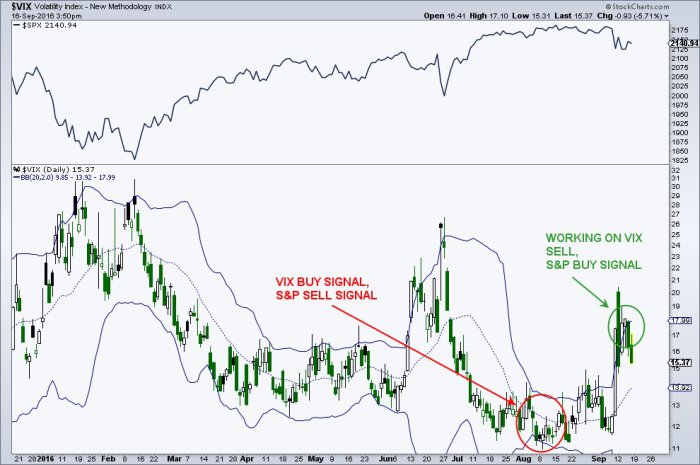 Gold has traded both with volatility & the Dollar, Naturally Gold, Silver, & miners were all down on the week. So we don’t have much to say except look at an intermediate term indicator:

That may well be the case but Indians are buyers on weakness. And the recent gold rally has kept them on the sidelines. Late October early November may be different. But we still feel that Gold is more dependent on global liquidity than fundamental demand. And Gold is going to the BoJ & Fed Wednesday oversold & sitting just above its 100-day.