1.First Shoe Drops; Will the Second drop too?

Our favorite indicator has been demonstrating the increasing cost of leverage in markets. For new readers, this indicator simply charts price performance of a leveraged closed end fund, like UTG, against an unleveraged ETF, like HYG, from the same asset class.  Simply put, the leveraged UTG should underperform unleveraged HYG when cost of leverage is going up and conversely.

Actually this has been going on at least since the release of July payroll report on August 5, 2016. Talk about markets pointing to events before they happen. Because this did happen in a rush on this Thursday and Friday. The obvious trigger was the somewhat disappointing decision by ECB Chairman Draghi to not increase their QE as expected. We say “somewhat” to describe the reactions of FinTV folks.

You need a totally different word to describe the reaction of German interest rates. The German 30-yr yield shot up 8.6 bps on Thursday. In response the US 30-year yield jumped up 7.3 bps. The US stock market did not fall as much as the German DAX.

Draghi’s was the first shoe to drop on markets. But you usually need a second shoe or a 1-2 combination in boxing to stun, don’t you? The second shoe has not dropped yet. But a second punch came on Friday morning via the hawkish words of Boston Fed President Eric Rosengren. The German 30-yr yield shot up by 11.5 bps dragging the US 30-yr yield by another 7.2 bps. Mere numbers don’t tell the real tale:

And how does the move in US 30-yr yield look? 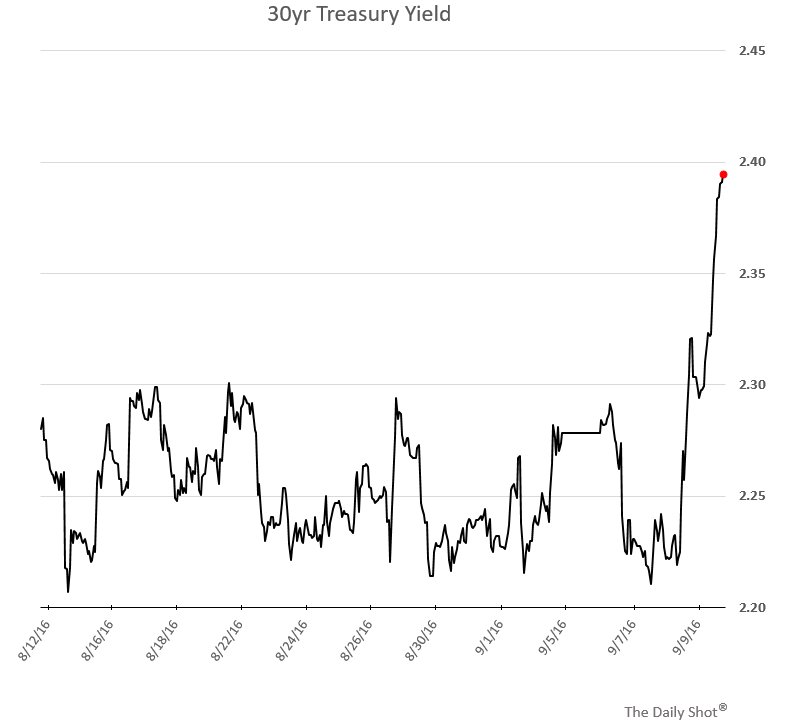 And what does the move in the US yield curve look like? 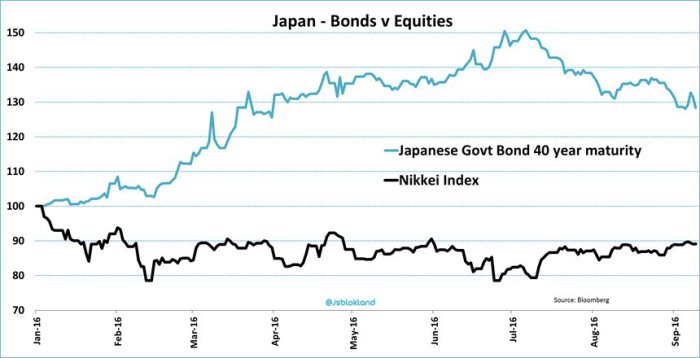 2. Drivers of the selloff?

So what is driving a sell off in long maturity sovereigns around the developed world?

Let us stick to the first scenario. That in itself was enough to shake up the old risk appetite, right? Yes said the global equity indices and sold off hard on Friday. The sell off was proportional to high beta & to large positioning. Where was the absolute worst positioning? 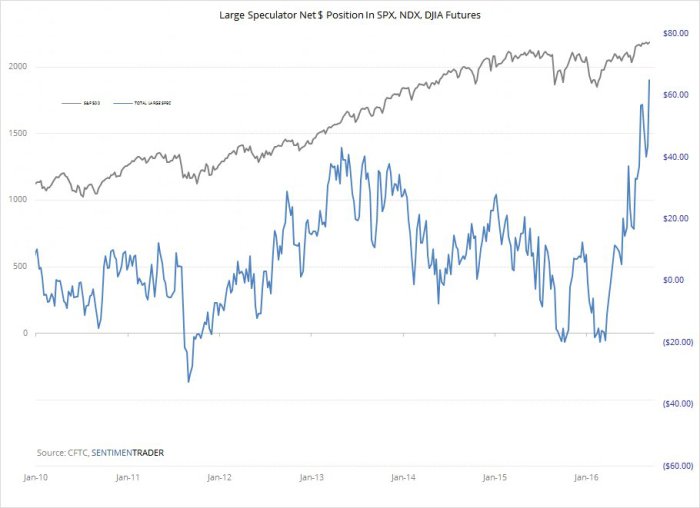 Large speculators is such a diffuse term isn’t it? To get more granular, listen to Wednesday’s comments of Marko Kolanovic of JPM Morgan:

As his base case, Kolanovic is expecting a 5% type sell off which would begin by first dropping below 2160-2150 (which happened on Friday) and then an additional drop of 100 handles. Then he can see a rebound from there to 2200 or new highs by the end of the year.

But is there a possibility for a bear market? Kolanovic said yes but only if central banks make a mistake of policy. And if they do, then the second scenario we outlined above will play out. Meaning the markets will conclude that the magic of central banks was an illusion and that these emperors never had any clothes. Whew! God forbid ! Or more correctly Yellen forbid.

That’s not just us saying so. The man himself said it on Friday.

Art Cashin is so right. Chair Yellen would be amazingly & arrogantly adventurous to raise rates on September 21, 2016. Especially so given the weak ISMs & ho-hum payroll report. What would happen to the Fed’s credibility if they raise rates in September and the payroll report comes in weak in the first week of October?

But before September 21 comes Monday, September 12.

What made Friday dicey was a dove named Rosengren putting on hawk’s feathers.  But Brainard is in another tier of dovishness. Not just because she is naturally so but because her international experience makes her aware of the fragility of the global economy.

Look what happened to German exports on Friday: 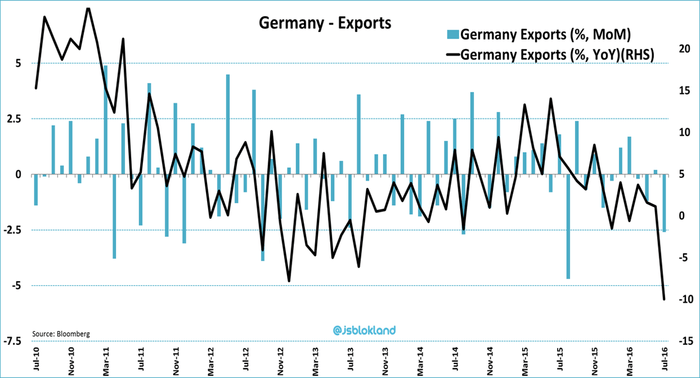 Look at the direction of European macro:

Then you have Chinese inflation data: 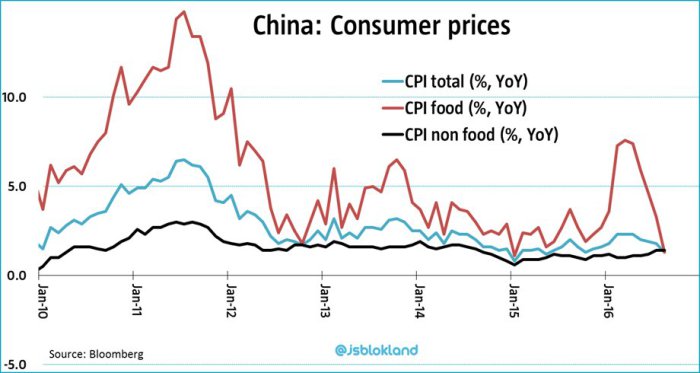 How does the weakening Yuan affect US wages? As Gavekal capital writes: 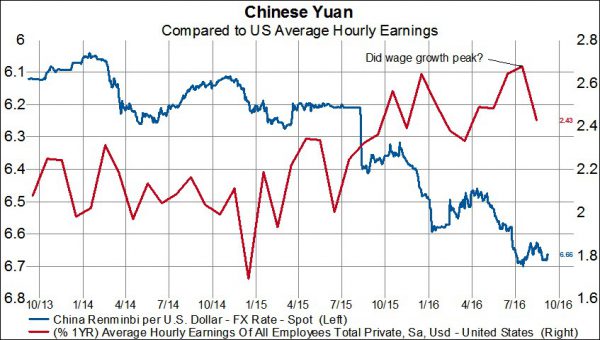 So given all this & given the brainy sagacity of Dr. Brainard, why would she give a nod to raising rates in September? Therefore if she actually does so, then the markets will price it in as a clear cut signal. Will that signal be like what Wyatt Earp bellowed that day to Ike Clanton at the train station – “… I am coming and I am bringing hell with me”.

Remember Dr. Brainard speaks at 1:30 pm. Almost everyone we heard on TV seemed to expect a dovish message. If she assuages the fears, then we could see a bounce of sorts next week. If she drills in the hard message, then what? We will wait and see.

Football is back. Last weekend was just glorious; the best opening weekend in college football history. Thursday gave us a great Broncos-Panthers game. Hopefully this weekend is just as good. Then we can forget about the Fed, markets and all that stuff till Asia opens on Sunday evening.