Remember how the US presence in the Vietnam war ended? In a final exit via helicopters just before the North Vietnamese army entered Saigon. Is that where the 15 year American involvement in Afghanistan heading? If this sounds too dire, read on.

First the map tweeted by Stratfor in August 2016: 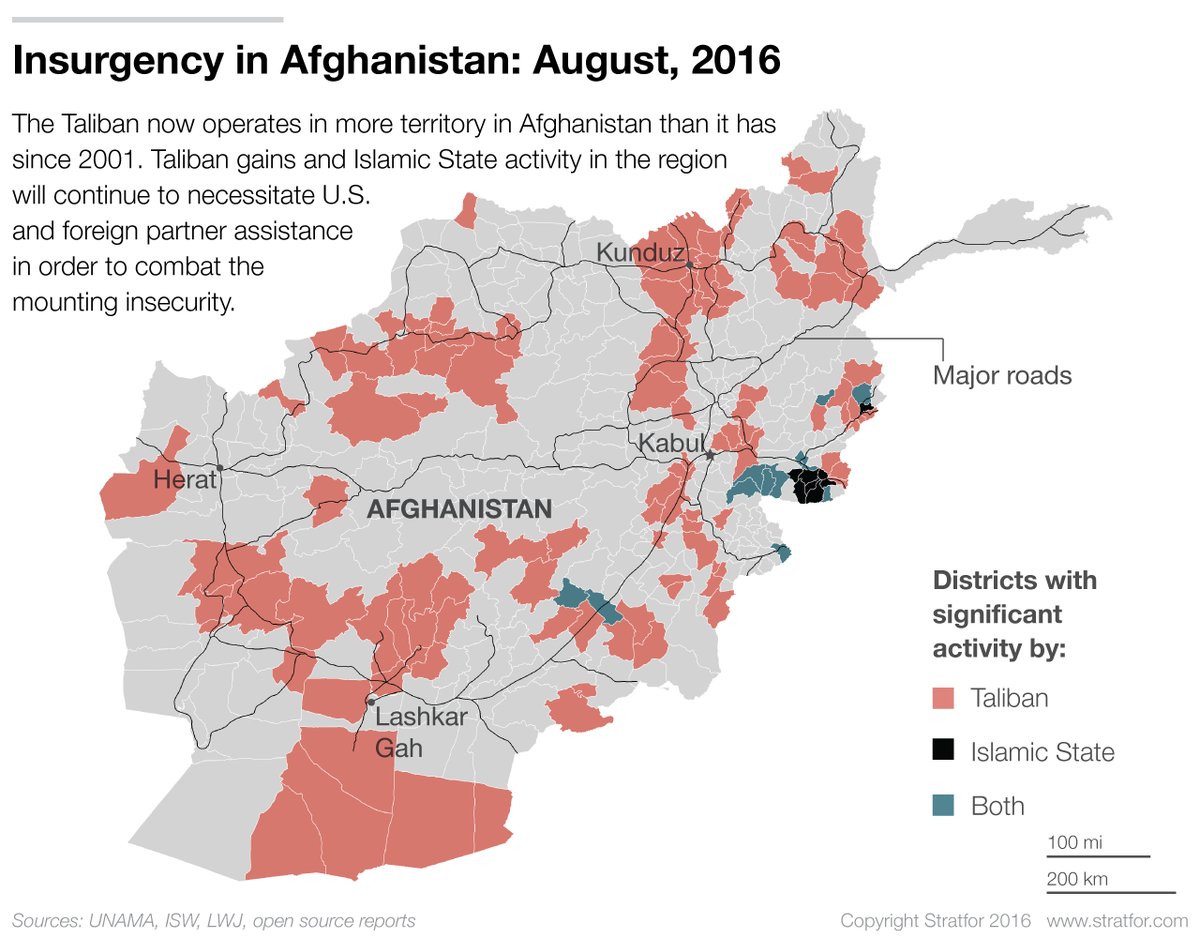 This map is scary because it shows how the Taliban are expanding their sway all over the perimeter of Afghanistan & now marching inwards towards the center. That is the jist of the Stratfor report of October 12, 2016 titled Taliban Target the Country’s Regional Capitals.

Guess what! The report on October 12 became outdated on October 13 according to a New York Times article:

Lashkar Gah is the regional capital of Helmand Province that is adjacent to the Pushtun areas of NaPakistan. That makes it critical to both the Afghani Government & to the military-terrorism complex of the NaPak army. The NYT article quoted Mr. Chakhansuri, an assistant to Afghan President Ghani:

The Taliban advance in provinces that border NaPakistan is only a part of the Taliban strategy. As Kamran Bokhari of Geopolitical Futures wrote in his article on October 10 titled Afghan Government Staring at the Abyss:

Speaking of Farah near the Iranian border, Stratfor reported on October 11, the day after Bokhari’s article:

Take a real look at the map above & you will see that the Taliban are slowly & methodically winning areas that border all the neighbors of Afghanistan, Iran, Turkmenistan, Uzbekistan, Tajikistan & of course NaPakistan, the godfather regime of the Taliban.

This is clearly unsustainable or as Kamran Bokhari of Geopolitical Futures writes “Something has to drastically change for the current trend to reverse”. What are the choices for this “something”? Bokhari is clear:

The first seems impossible because “the Afghan government is still unable to function” despite massive assistance from America & the West over 15 years. And the second is extremely unlikely, an analytical term for forget about it. So what has Geopolitical Futures begun doing?

In that case, how will the American contingent in Kabul leave land-locked Afghanistan? In a convoy of helicopters just like in Vietnam?

As you can see from the debates, no one in America is focused on Afghanistan, the place where terrorism against America first began and where the original Al Qaida was born.

That will change if & when Americans are forced to leave Afghanistan in a rush that is captured on TV. And who will be the winner? The same godfather regime that gave birth to the Taliban, fed it, nurtured it, protected it against American wrath after 9/11 and then unleashed it against American presence in Afghanistan after American attention got diverted to Iraq, then Libya & now Syria.

So how will America treat this godfather regime after the Taliban take Kabul? Simple – America will anoint it again as America’s critical ally in the war against terror and ask its support in controlling its children, the victorious Taliban.

How will that regime react? How do you say “Happy Days are here again” in Urdu?

Send your feedback to editor@macroviewpoints.com Or @MacroViewpoints on Twitter
Afghanistan, Taliban