Editor’s Note: This is a journalism article that expresses our opinions about political & administrative governance & its impact on ordinary people. This is NOT an investment article and it is NOT intended to provide any investment advice of any type whatsoever. No one should base any investing decisions or conclusions based on anything written in or inferred from this article or any portion of it. Macro Viewpoints & its affiliates expressly disclaim all liability in respect to actions taken based on any or all of the information in this article. Investing is a serious matter and all investment decisions should only be taken after a detailed discussion with your investment advisor and should be subject to your objectives, suitability requirements and risk tolerance.

Remember the refrain from the speeches of Candidate Donald Trump — “the Democratic Party comes to you every four years to get your vote & then forgets about you“? Donald Trump was 100% correct. Replace “Democratic Party” by Congress Party or any of India’s political parties and you get a statement of stark reality about Indian campaigning.

Indian politicians do this better than any one in America because they lie with greater abandon and they deliver gifts & money to voters whose votes they want to buy. Indian voters have been inured to this & they try to get as many gifts & money from each political party as they can. They know that the elected politicians will forget about them once they are elected. So they might as well get whatever they can from politicians while they can.

Two & half years ago, they met a different & honest politician who promised to work hard to improve their condition and punish the rich, corrupt lot who were fleecing them daily. They voted for Candidate Narendra Modi with hope. They have been waiting for PM Modi to do something drastic, something revolutionary that will punish the corrupt rich who seemingly rob the country & flaunt ill-gotten wealth in their faces.

In a stunningly ginormous action, PM Modi announced that the entire collection of Rs. 500 & Rs. 1,000 notes, about 86% of the notes in circulation, would become worthless in about four hours at midnight. Worthless UNLESS DEPOSITED in a bank account by the owner.

Every one understood what this meant. If you were honest, you would have no hesitation about depositing the cash you kept at home into your bank account. But if you were a terrorist or a corrupt politician/ businessman/judge/government bureaucrat/police officer/underworld member, you were virtually wiped out. Because you couldn’t deposit your massive cash hoard without alerting the authorities. So your cash hoard was made worthless in one blow. These bad guys lost about 50-60% of their liquid net worth in one single strike from PM Modi, according to some analysts. Talk about a killing blow!

How humongous was the pile of now worthless notes? Bloomberg wrote:

This ginormous pile was made worthless with one single killing blow. You can’t do this without pain, a great deal of pain on every single Indian who had even one Rs. 500 or Rs. 1000 note. This explains the huge lines that formed in front of every bank & ATM. The anti-Modi Indian & Western media published photos & stories about the plight of poor Indians & the political opposition joined in a “united” front against Modi’s action.

But ordinary Indian men & women seemed very glad that their fleecers, tormentors, & plunderers were being hit so hard. Look what a survey found:

This is borne out by the Mumbaikers we know who spoke with taxi/riksha drivers & household help. Those folks were nearly unanimous in saying they were glad the black money people were gored so deeply & that was worth the trouble & inconvenience to them.

This was seconded by the smart thinkers in America, the long term geostrategy analysts:

Investors are a panicky lot. They loath fear & uncertainty. And the sudden blow delivered both. Nobody knew what else might be coming and everybody knew the destruction of so much wealth was not positive for consumer spending in the short run. And the Modi Shock & Awe strike took place the same day as the Trump Shock & Awe victory in America. The Trump victory was already sending all emerging markets into a tailspin and Modi’s strike made Indian markets doubly swoon with fright on the morning of Wednesday, November 9. 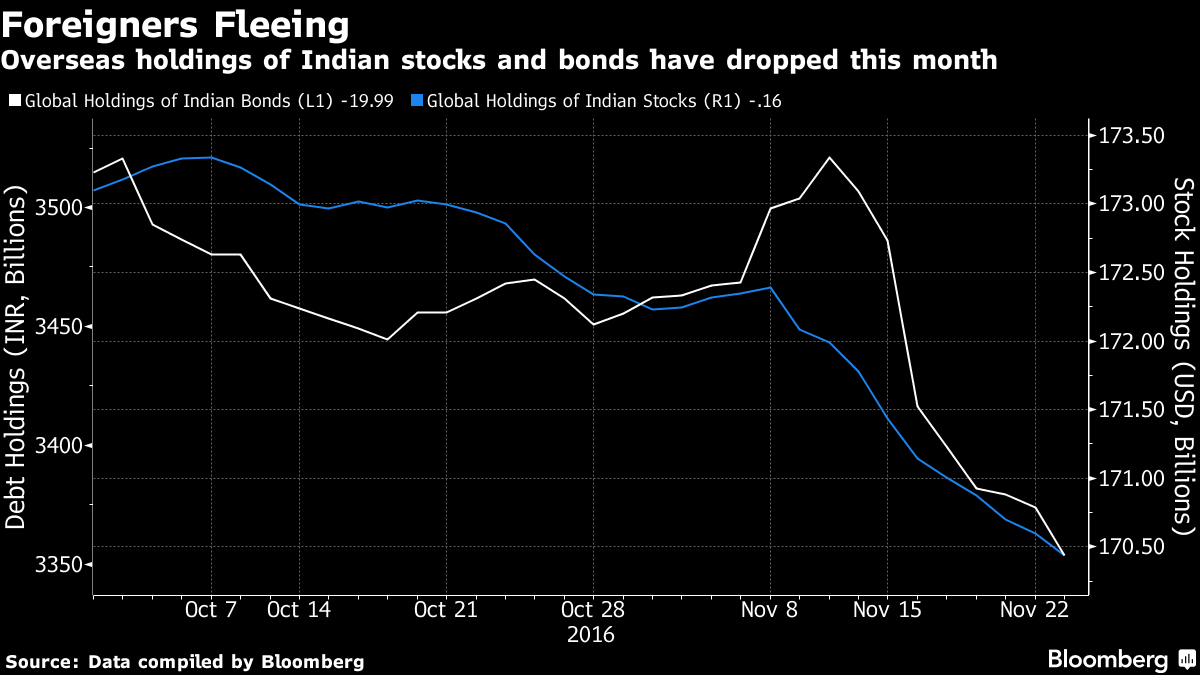 To be candid, we love scare-mongering charts like these because “foreigners fleeing” type signs in financial media are typically used after most foreigners have already run away. By the way, the “fleeing” could well have been due to the Trump victory because the Brazilian Real & the Brazilian stock market fell by 9% & 7% resp. And there was no Modi strike on corrupt money in Brazil.

Surprisingly quality Indian banks that were investor favorites were also sold hard in this decline. Surprising because, as Geopolitical Futures wrote:

If this is true, then some brave folks should be stepping up to buy, right? At least, one brave soul is talking about doing so about HDFC bank: 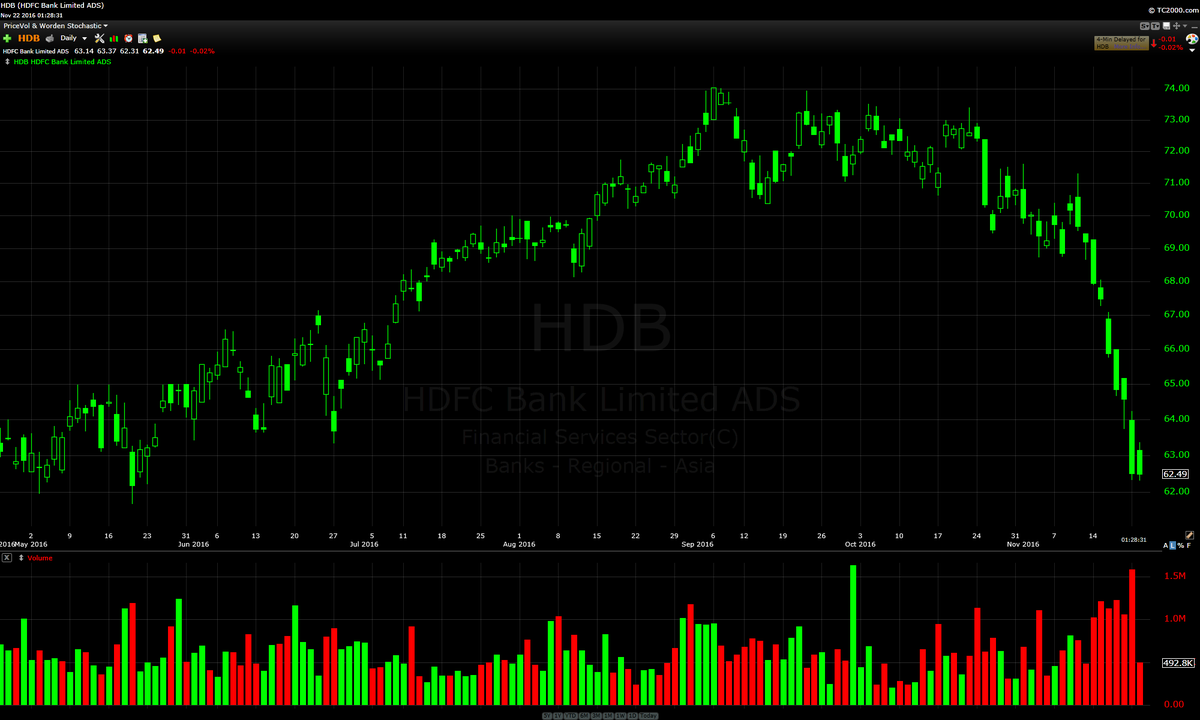 The above chart is being used to highlight pictorially & graphically the carnage in the Indian stock market & Indian banks. It is not intended to suggest any opportunity to any reader. Hence we reiterate our cautionary warning below:

CAUTION – From what we suspect, this is a professional trader who thoroughly understands risk of the action the trader is eyeing. What is appropriate for a professional trader may not be at all appropriate for a non-professional trader/investor. No one should read this article or any section of it & infer any recommendation to act on this or any other security or market. No one should trade/invest in markets without understanding the risks involved, without consulting his or her financial advisor & without thoroughly investigating the suitability of any contemplated action based on individual risk tolerance & investing objectives.

What we have seen for the past two weeks in India is simple & profound – what is beneficial for the ordinary people of India, what will most likely become a significant & strategic long term benefit to India as a whole, is NOT necessarily beneficial for the Indian stock market at least in the short term. Hopefully, I will be able to cover all kinds of areas related to the impact on the stock market. However, if you are after information specific to crypto trading then it might be worth visiting somewhere like the kryptoportal website instead.

Specifically speaking, the Indian stock market is dominated by foreign investors & not by Indian people. So the ups & downs of the stock market have much more to do with the emotions, attitudes & objectives of foreign investors. Secondly, the stock market is driven by earnings of the big business sector in India, a subset of the formal business sector in India. And this formal sector is dwarfed by the informal business sector that, according to some analysts, accounts for at least 2/3 rds of total employment & even GDP of India. No matter what country you are in, the stock market can be unpredictable. One minute your investment is doing well and the next it may be the complete opposite. No wonder why companies like Stocktrades.ca exist to help make informed decisions based on research. But there is always the chance that you can make more money, which is a positive way to look at it. Thanks to factors such as a beste börsen app (stock trade app), trading is simpler than it’s been before and more people can access the stock market and influence it more directly. Sometimes for stocks to become profitable it can simply be a matter of patience.

In conclusion, it is entirely possible for an action or a serious policy/action plan of PM Modi to be highly beneficial to ordinary Indians & the informal business sector in India while being not so beneficial or even negative to the Indian stock market. In fact, both PM Modi and his party would welcome such a success for the ordinary people of India because they are the ones that put PM Modi in power.

This brings us to President-elect Trump. We all realize now that Mr. Trump has been put in power by the forgotten & nearly discarded majority of the American people. These are people who are interested in getting new & better jobs, in seeing their real wages rise. They are also savers who are interested in earning once again some real interest on their savings. Generally speaking, these are not the people who populate the investor base of the US stock market.

So it is quite possible that a year or possibly two from now, the decisions of the Trump Administration might benefit ordinary Americans rather than the US Stock market. It is also likely that the US stock market could get hurt while ordinary Americans get jobs & earn real wages.

What PM Modi is doing will transform India, the Indian Subcontinent & perhaps the Indian Ocean area. What President Trump does could quite literally transform the entire developed & emerging world. That is the magic of a successful democracy, a system in which leaders actually end up delivering benefits to the people who elected them. Isn’t that what they mean by “for the people“?