Everyone in India knows the cancer in Indian Society – pervasive “black” money. This is the biggest difference between the common Indian and the “establishment” that rules the lives of Indian people. Corruption is a part of every society on earth but rarely does corruption slap citizens in the face every day as it does in India. When you deal with government employees, policemen, municipal workers, storekeepers, businessmen, you come face to face with corruption. Everyone knows that “black” or untaxed money is the fuel behind political parties as well as terrorists.

This corruption engine is fueled by cash, bundles of high denomination Rupee notes that are stored by the corrupt in many innovative places. These hordes of cash have been used by political parties to pay thousands of “volunteers” including cadres of goons; by terrorist organizations to pay young men to pelt stones on the police, to induct them in armed terrorism & to buy weapons.

The only people who get no benefit and suffer all the negatives are the poor who are forced to pay bribes, salaried workers whose salaries are taxed at source and people who get income from their savings.

One of the main planks of Narendra Modi was a promise to bring clean governance to India and an explicit commitment to root out corruption. How do you do this when government bureaucrats, tax authorities, judges & police participate in the corruption racket & benefit greatly from it?

On November 8, 2016, PM Modi struck a sudden killing blow against the beneficiaries of corruption.  He made the massive amount of corrupt money hiding in cash worthless in one stroke. On the evening of November 8, he announced that the Rs. 1,000 & Rs. 500 notes would become invalid & worthless as of midnight. People could deposit their collections of these old notes in their bank accounts in any size they wished to protect their monies. So honest Indians would not lose anything but people who had “black” money in these notes would see their undeclared wealth become worthless.

This was an extremely adventurous step for PM Modi because it negatively affected every single Indian immediately. Virtually every Indian that had any money in 500 & 1,000 rupee notes had to line up in banks to exchange these worthless notes for new ones. The scale of this problem is ginormous and the execution left a lot to be desired. That is why photos of very long lines at banks were spread by every media organization.

But it is clear now that the vast majority of people support PM Modi’s move even if it inconvenienced them. Because every Indian instinctively understood that the liquid wealth of  “black” money people was being wiped out. Nothing is more emotionally satisfying to the common Indian than to see the black money gang gored so deeply. They all see that no one is spared in this surgical strike against black money, not even big money contributors to the ruling BJP. Whether you are a government minister, a senior police official or a wealthy real estate tycoon or businessman, your massive collection of cash is now worthless.  The reaction of the common man & woman is exemplified in the sand sculpture by the famous Sudarsan Pattnaik: 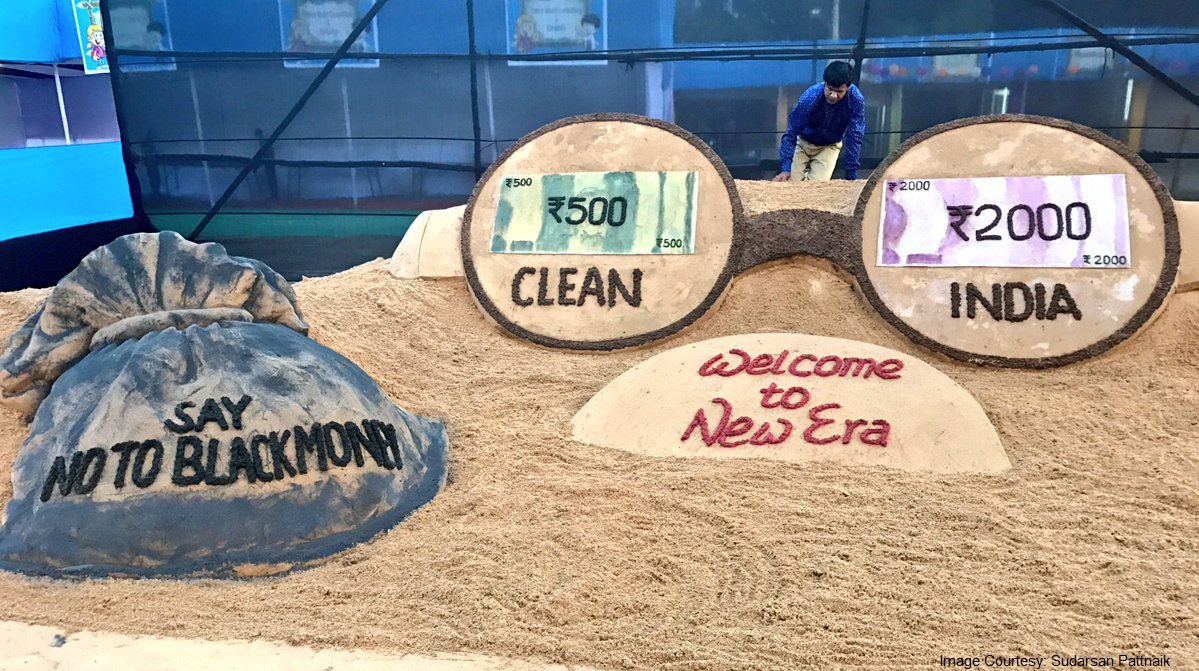 This may be a one time measure but it will leave an enormous dread among the corrupt. First the immediate loss of their collection of cash will take years to make up even if they find new avenues to store what they collect in the future. And the fear that if PM Modi can do it once, he can do it again.

The benefits to Indian society are immense & immensely diverse:

There is now doubt that the Indian economy will take a short term hit. India has always been a cash economy and the now worthless 500 & 1000 rupee notes were 86% of the currency in circulation. The destruction of the “corrupt” collection of the old notes might be as large as 40-50% of the liquid net worth of the “corrupt” class according to some analysts. That is an enormous destruction of wealth, a hit whose effects will continue to be felt in consumer demand for months. No wonder the Indian stock market has been down hard since November 8, 2016.

But the long term benefits to India & to the Indian people are great. That is what the Indian people have realized instinctively. And they love, absolutely love, the fact that PM Modi has struck a savage strike against their worst enemy  – the gang of corrupt power brokers who make their lives miserable.  We cannot stress how emotionally satisfying this is to the common Indian, how this fulfills their desire for justice for themselves & their families.

In one stroke, PM Modi has convinced the common Indian that he is on their side, that he is their champion against the corrupt & the powerful. In one stroke, he has expanded his reach among every religious, ethnic, jaat & language group in Indian society. In one stroke and aided by the vitriol heaped on him by the political opposition, he has demonstrated that he is the only leader the Indian people can support with their heart.

How can this be anything but good for his administration?