1.Football’s got nothing over markets

Despite being an ardent football fan, we must concede what we have seen over these past two weeks is so much more explosive than any offensive burst in football. Historical records fell in just about everything: 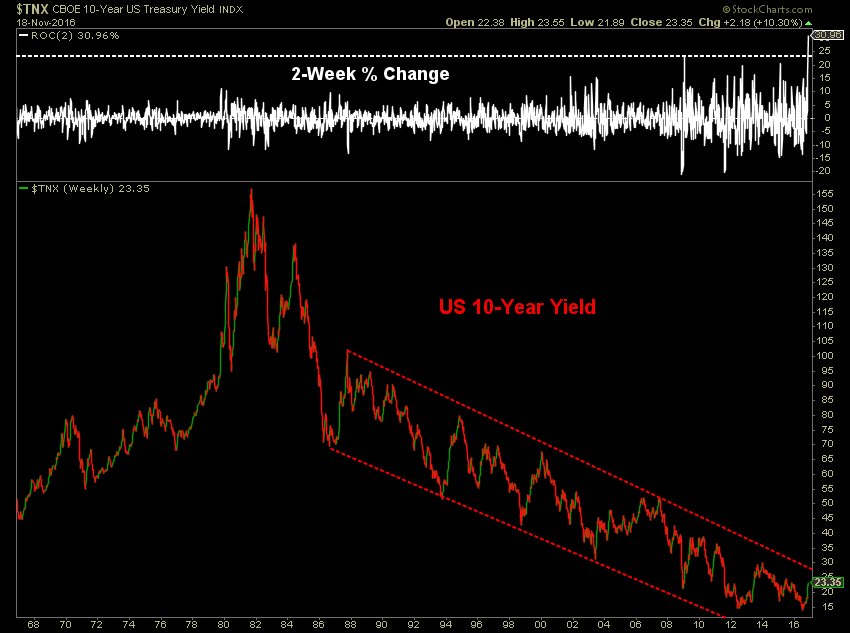 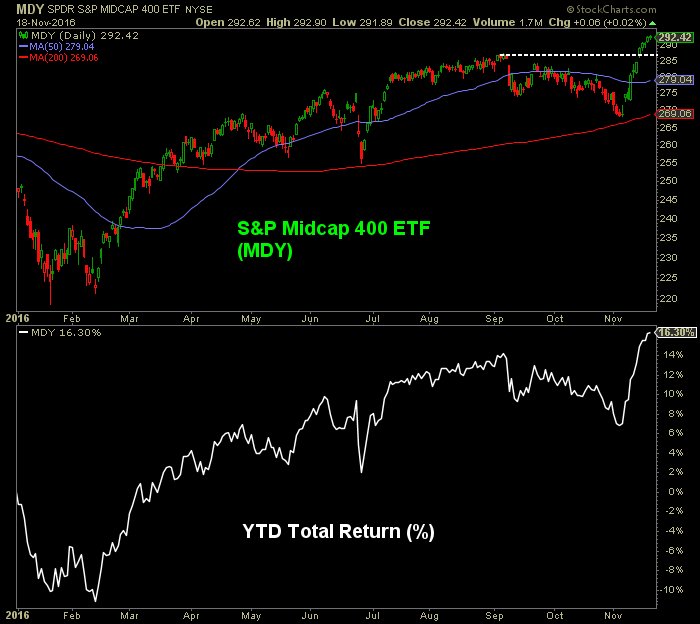 Other performances were amazing even without setting new records. 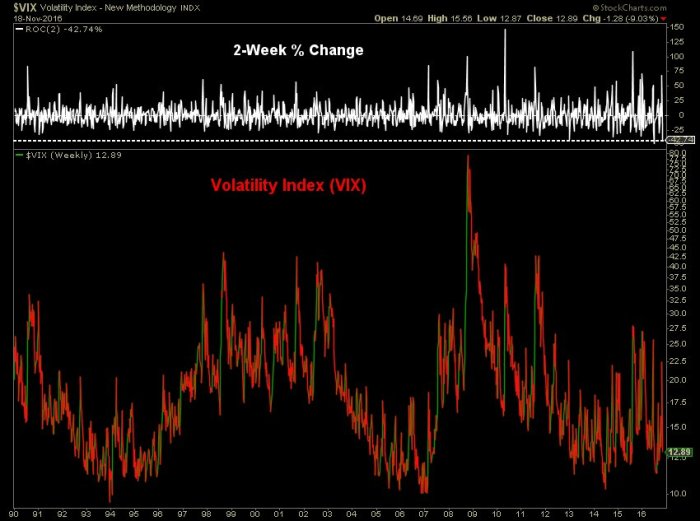 Carter Worth, resident technician at CNBC Options Action said on Friday stocks are the secondary factor and that its “all about yields & currency“. Tom McClellan had tweeted a similar message on Tuesday: 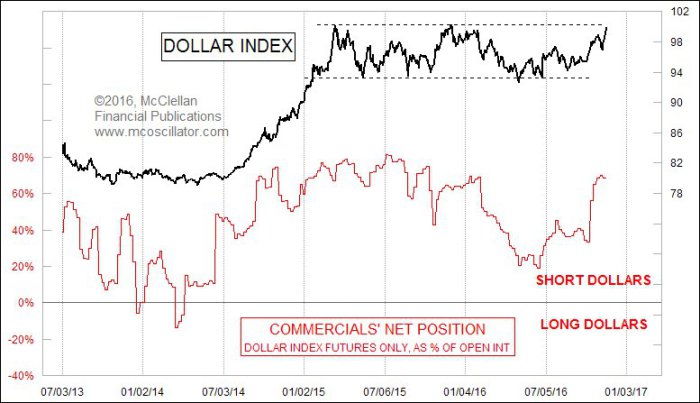 Who are we to disagree with these two august analysts? So we focus first on Dollar & Treasury yields.

To put the Dollar rally in long term perspective:

If you take a close look, you will see that the Dollar is just about where it was at the end of 2000 and just before President George W. Bush took over. In the next two years,  it rallied to 120. What might the Dollar do after President Trump takes over? 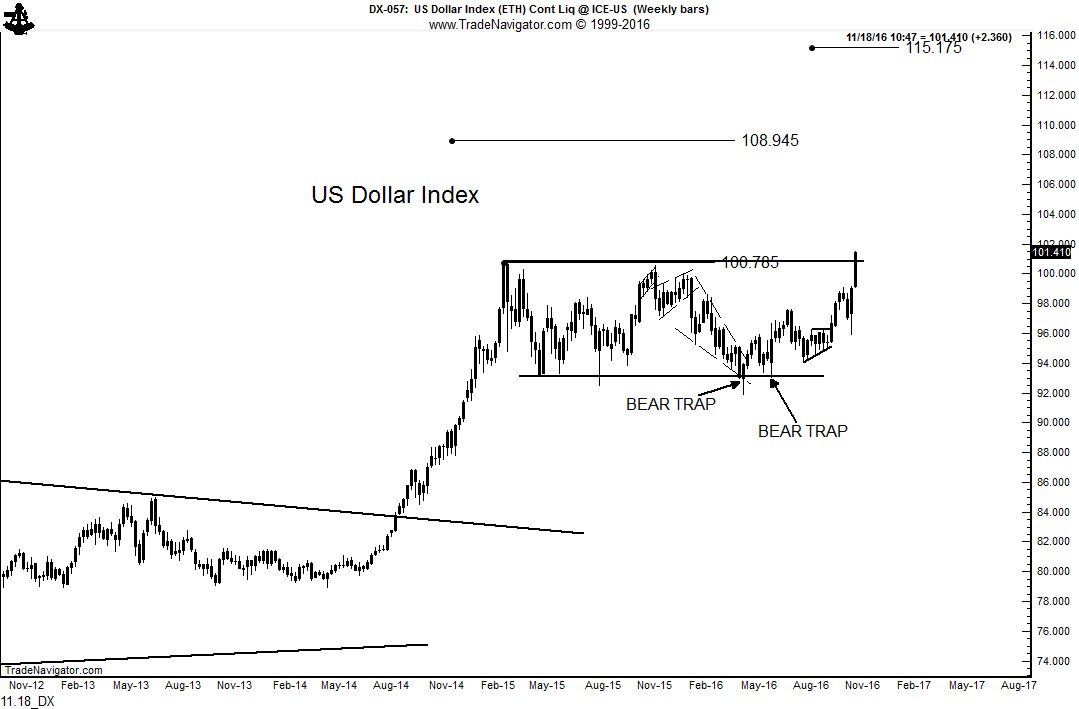 Recall that the two year rally in the Dollar from 200-2002 coincided with a recession, a severe slowdown in trade & a bear market in stocks. What about now?

A day later, Raoul Pal told Yahoo Finance that History shows there’s a 100% chance of a recession for Trump. Even media got involved in arguing fabout the bad effects of the Dollar rally. 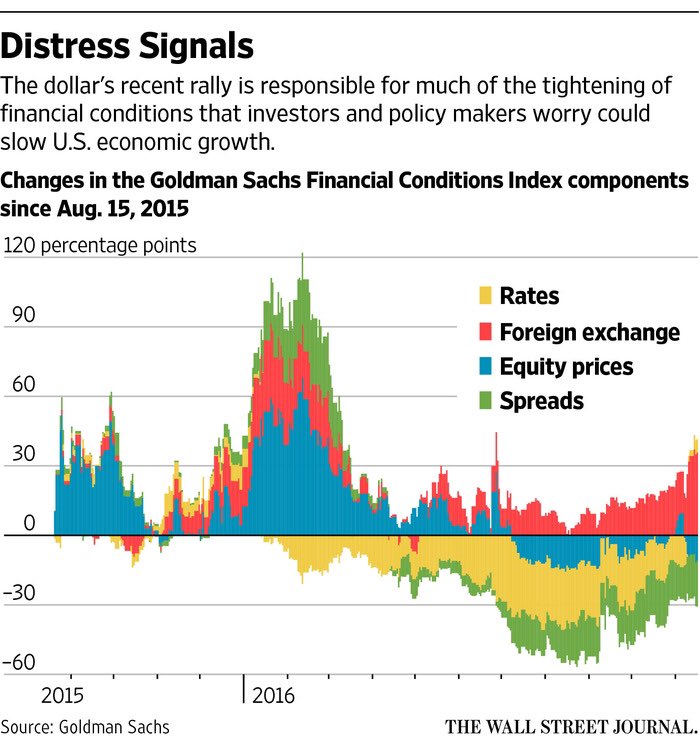 Raoul Pal argues for a correction in the US Dollar. Tom McClellan points out that commercial traders are betting on a near term fall in the Dollar. So did Carter Worth on CNBC Options Action on Friday.

These august gentlemen should first ask Fed heads to kindly shut up if they want a correction in the Dollar & a corresponding relief from the daily shoot up in Treasury yields. Because the action on Thursday & Friday was the direct result of Chair Yellen’s comments on Thursday and NY Fed Dudley’s comments on Friday. Nothing does as much unnecessary damage as talk from these Fed heads. 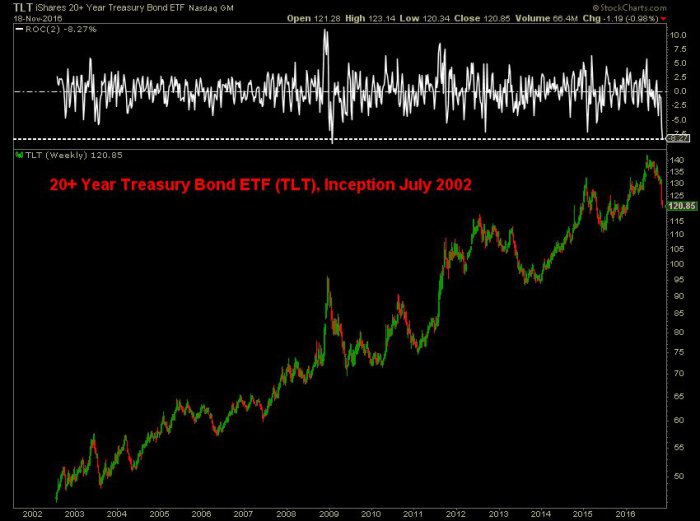 This looks horrible but the decline was made worse by a 2% fall from Thursday to Friday. Look at Wednesday’s close & you will see that TLT was higher than last week’s close & the 30-5 year Treasury curve had lower yields than last Friday’s close. Then came Yellen on Thursday & Dudley on Friday. And yields shot up & TLT fell through a trap door as it were – TLT fell 1.8% in these two days; the 30-year yield rose by 10 bps, 10-year yld by 12 bps & the 5-year yield by 11 bps. 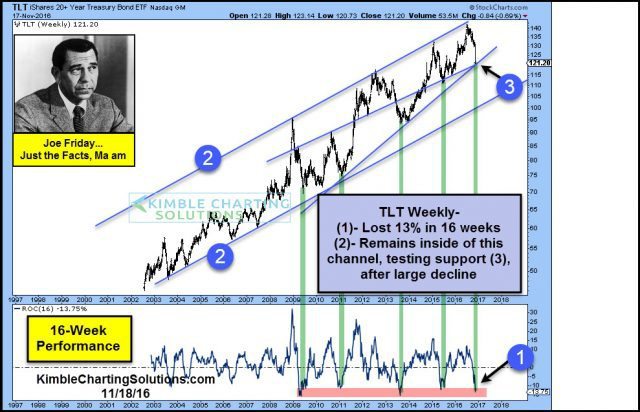 But we may have three more weeks to go by one historical precedent:

Of course, the main factor driving yields higher was stated succinctly by Steve Bannon, Strategist of the Trump team:
But we do wonder whether he also ends up wishing he could come back in the next life as the bond market as his predecessor, James Carville, did in 1994.

The Chinese Yuan has been declining as steadily as the Dollar has been rising. Then on Friday: 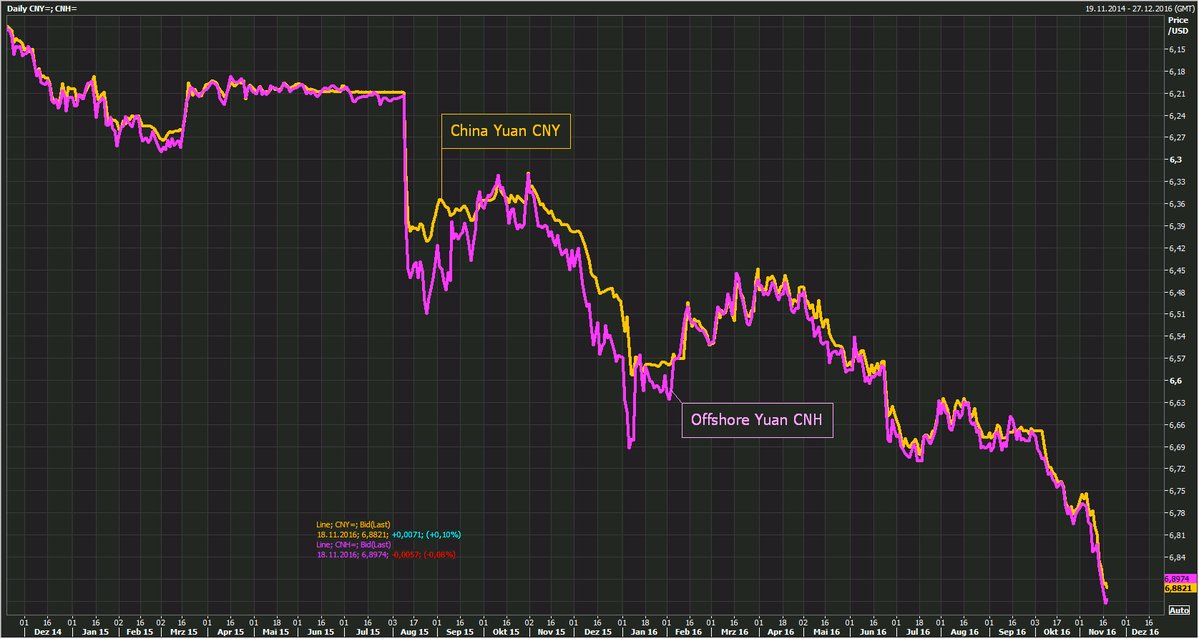 Can you spell China stimulus without spelling Copper? Copper has been rallying well before the election and shot up after the election. Last Friday, Ryan Detrick had tweeted:

This Thursday, Tom McClellan wrote in his article Copper Spike:

This might be the best signal, when & if triggered, of a respite in the relentless reflation trade that is driving currencies, yields & stocks.

Clearly all systems are go for the US stock market including fundamental expectations, technicals and superb seasonals. And once again Tom DeMark has been early or wrong in calling for a peak for this past Wednesday at 2215. But his supporters have not given up:

The MVP of the indices are the small caps. But is that good? Not necessarily argued: 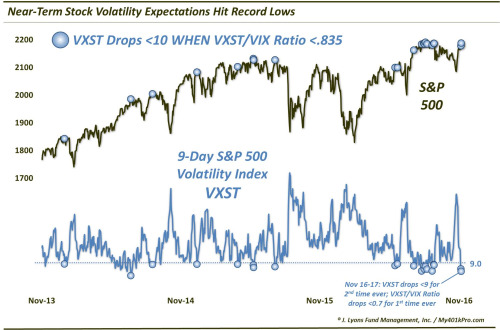 But are these really actionable near term? Especiaally during Thanksgiving week and then during Month end? 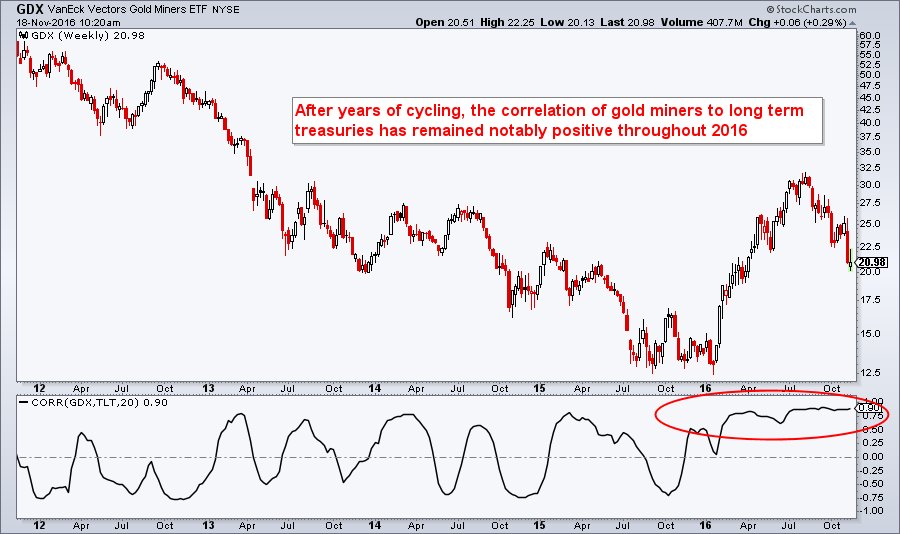 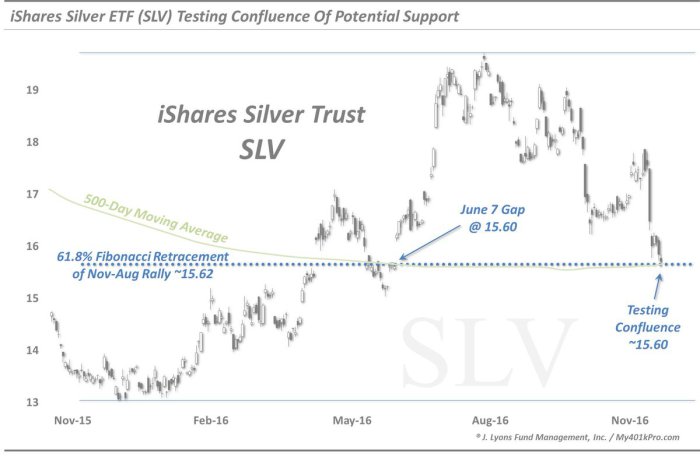 Another OPEC meeting is upon us. Will they finally learn of the French Musketeers – All for One & One for All? One chart pattern argues yes: 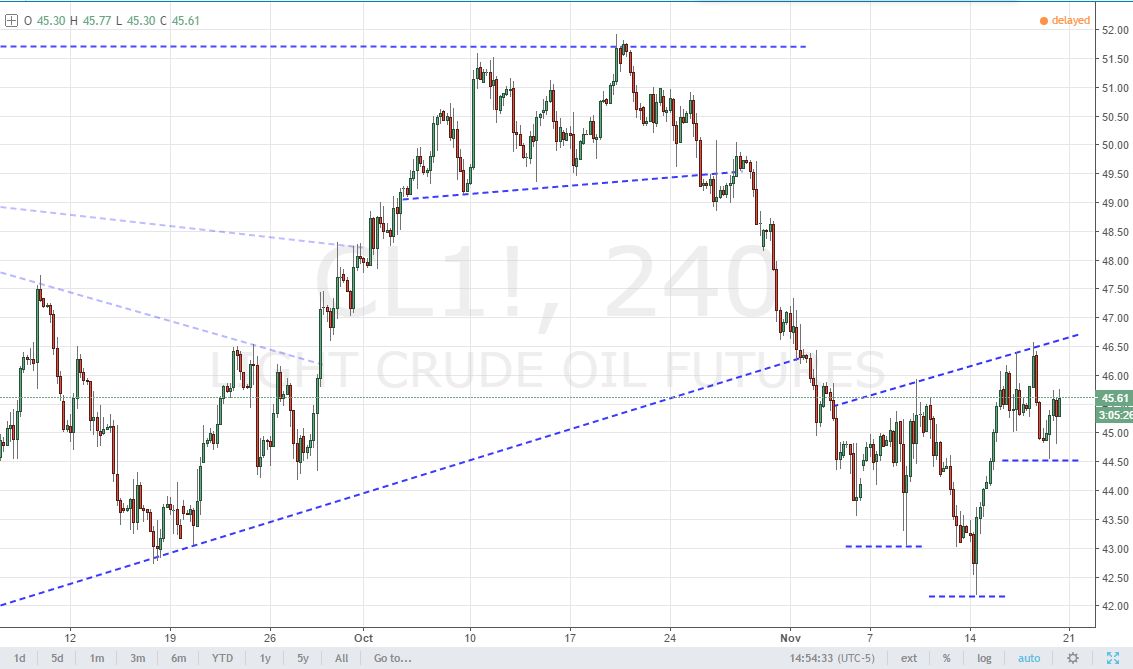 And Gundlach said in his webcast – Crude oil could find its way to $60/barrel and it will be hard for it to drop below $40.