Indian men can build & send a spacecraft to Mars; they can win Scientific prizes; they can become CEOs of large companies. They can even watch pornography on websites like https://www.hdpornvideo.xxx/, but they are all presumed rapists in the eyes of Indian Judiciary when they have consensual sex with a single woman. Because Indian law is based on the premise that a single woman would only consent to sex under the assumption that the man will marry her.

So if a single man does not marry a single woman after consensual sex, then he becomes guilty of “misconception rape” and often goes to jail. Because, under Indian Law, the consent given by the single woman to sex gets legally nullified after the fact because that consent was based on her assumption that the man would marry her. So her alleged “misconception” becomes the man’s crime, a crime that very often sends the man to jail.

This is not a joke. Read what the Times of India wrote in May 2012:

What about the Supreme Court of India? Surely they don’t accept this? Read what the Wall Street Journal wrote in December 2013:

A particularly horrible case was reported by the Times of India in 2012 in their article “No Country for Lovers“:

That man was sentenced to a multi-year jail term, as we recall. This treatment of men is pure & simple Systematic Institutionalized & Legalized Abuse of Gender Rights, as we argued back on January 5, 2013.

Now finally one Judge in Mumbai has seen the light and taken a giant step towards common sense & modernity. What was the case?

What did Justice Mridula Bhatkal say in her judgement?

The judge further noted that society and societal interactions continue to carry “the baggage of morality”, with pre-marital sex being a “matter of censure”. “Under such circumstances, a woman who is in love with a boy forgets that to have sex is her option like her counterpart’s but refuses to take responsibility for her decision,”

This is a historic judgement for Indian Judiciary. Of course that is a left-handed compliment because it points out how horribly backward & pre-modern the majority of Indian judges are.

Note also that this “historic” judgement only applies to “educated” women and not to “uneducated” women. So single Indian men should check the degree certificates of women who consent to have sex with them. What if a woman says she is educated but doesn’t provide degree copies? Guess the man is still subject to “misconception rape” liability!

Still, progress comes in steps and this judgement by Judge Mridula Bhatkal is a giant step for Indian Judiciary and a great relief for Indian men unless, of course, this decision is overridden in a higher court.

Speaking of overriding a lower court verdict, we saw the other side of Indian Judiciary in an article sent to us via WhatsApp: 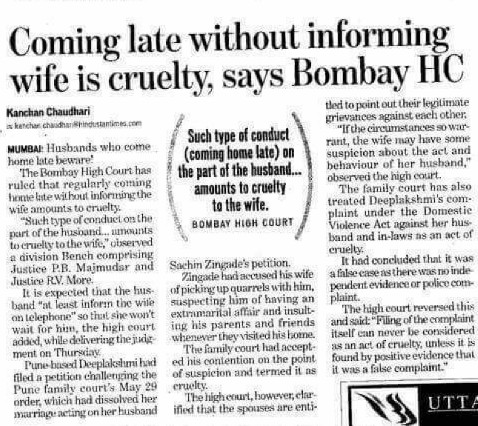 So coming home late is an act of cruelty by a husband towards his wife? Insensitivity yes but cruelty? Strange is the thinking of India’s Judges!!