1.”got us back on track again“

Last week, we postulated that the stock market is basically a confidence game, a game of confidence in President Trump’s agenda. We all saw that this week. After meandering for the first three days, in the words of Steve Grasso of CNBC FM, “President Trump got us back on track again” on Thursday.

But what about details, the what, the when etc.? It doesn’t matter much at this stage. Why? Because of what Rick Santelli said in his profoundly simple style – what’s in the box [President Trump’s agenda]  is something better than we had before.

And the economy might be seeing a Bona Fide Growth Rate Cycle Upturn ,according to Lakshman Achuthan of ECRI. Their “weekly leading index“ said Achuthan, “has very clearly given a “pronounced, pervasive, and persistent” signal that the upturn is real“.

Remember Larry Fink’s clear statement in 2012 that he would be 100% long stocks if he could. He proved to be correct. But today he is far from certain.

His words are almost a polar opposite of what he said back in 2012:

Fink does admit he is “pretty confused; ”.  Why? Because, according to him, “We’re living in a bipolar world right now.” What bipolarity?

Contrary to Mr. Fink’s confusion, the financial markets are absolutely sanguine. Not only did major stock indices close the week at new all-time highs, but Treasuries & Gold Miners outperformed US stock Indices as well as Small Caps, Transports & even EEM, Brazil & India. TLT & EDV were up 1.5% & 2.5% resp; Gold was up 1.2%, Silver up 2.6% and GDX, GDXJ up 3% & 6.3% resp. And the 30-5 year curve bull-flattened by 6 bps despite a breakout in the Stock-Bond ratio: 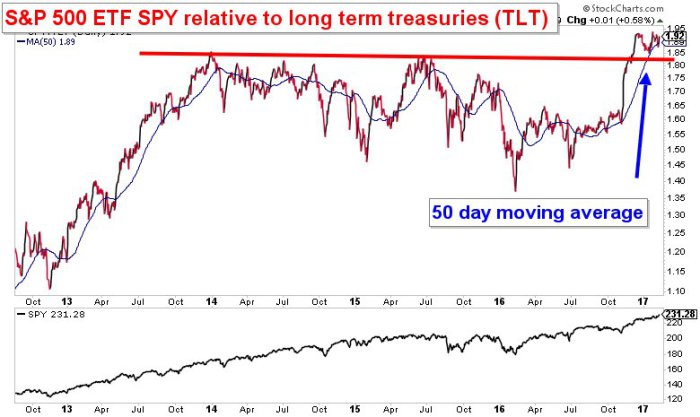 If hope is what pervades the stock market, what could cause a disruption? Perhaps seeing reality. Meaning the real danger could come when investors see the actual proposals of tax reform and then either ask “is that it?” or say “ok then!”.  Or could it simply be a fear of heights? 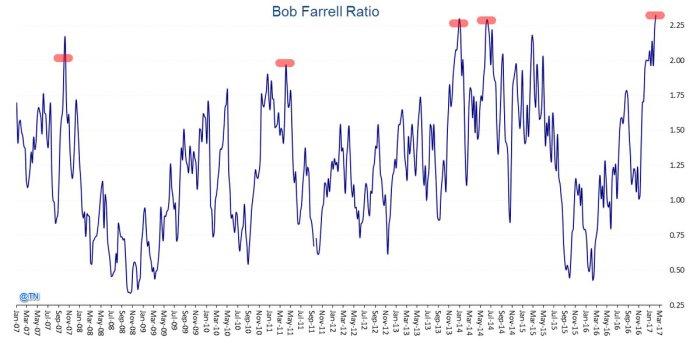 On the other hand, how often have S&P puts been as cheap as they are now? Not very often. So even fully invested individual investors can protect themselves to some extent for the short term.