Editor’s Note: The article below is based on the Raoul Pal, Paying Attention article published by Mauldin Economics. We knew much of what Mr. Pal describes but not in the seamless & smart way he uses to weave the story of the world’s first national digital infrastructure. We are also indebted to an old friend & regular reader who alerted us to this article on Mauldineconomics.com.

Come on, this has got to be an April 1st joke, right? Everyone knows what India is. Yes, they can mass produce technical armies to support the developed world. But actually building an amazingly innovative architecture that leaves the rest of the world behind? Fugeddaboutit! At least that is what New York, the world’s financial capital, would say.

Hold on folks! This is true and the report comes from one of the world’s most read global macro investors.

You really can’t ask for a more perfect story for the Gudi Padva (pronounced as “Paadvaa”) festival that began this past Tuesday according to the lunisolar calendar or the “Shaali-Vaahan samvatsar”. This marks the epoch-making victory of the Emperor Shaali-Vaahan over the Shak invaders (also known as Indo-Scythians), in 1st century CE. Thus began a multi-century period of learning & prosperity in Central India ruled from the famous city Pratishthaan, now known as Paithan.

So what story can match such an epoch-making victory that is still celebrated 2,000 years later? What Raoul Pal succinctly states as “the largest technological breakthrough of any nation in living memory“.

But who is Raoul Pal? Raoul Pal is the writer & publisher of Global Macro Investor that, in the words of the renowned John Mauldin, “has one of the very best, proven track records of any newsletter in the industry, producing extremely positive returns in eight out of the last twelve years“. Mr. Pal was previously the co-Manager of the GLG Global Macro Fund in London, one of the largest hedge fund groups in the world. Prior to that, Raoul Pal  co-managed the hedge fund sales business in Equities and Equity Derivatives in Europe at Goldman Sachs. Suffice it to say that when Raoul Pal speaks, the investment world listens.

What has Raoul Pal so excited, so excited that he writes “India is now the most attractive major investment opportunity in the world“?

The most attractive investment opportunity after India has already enjoyed a 17% rally in the first quarter, the best performance among all big markets? 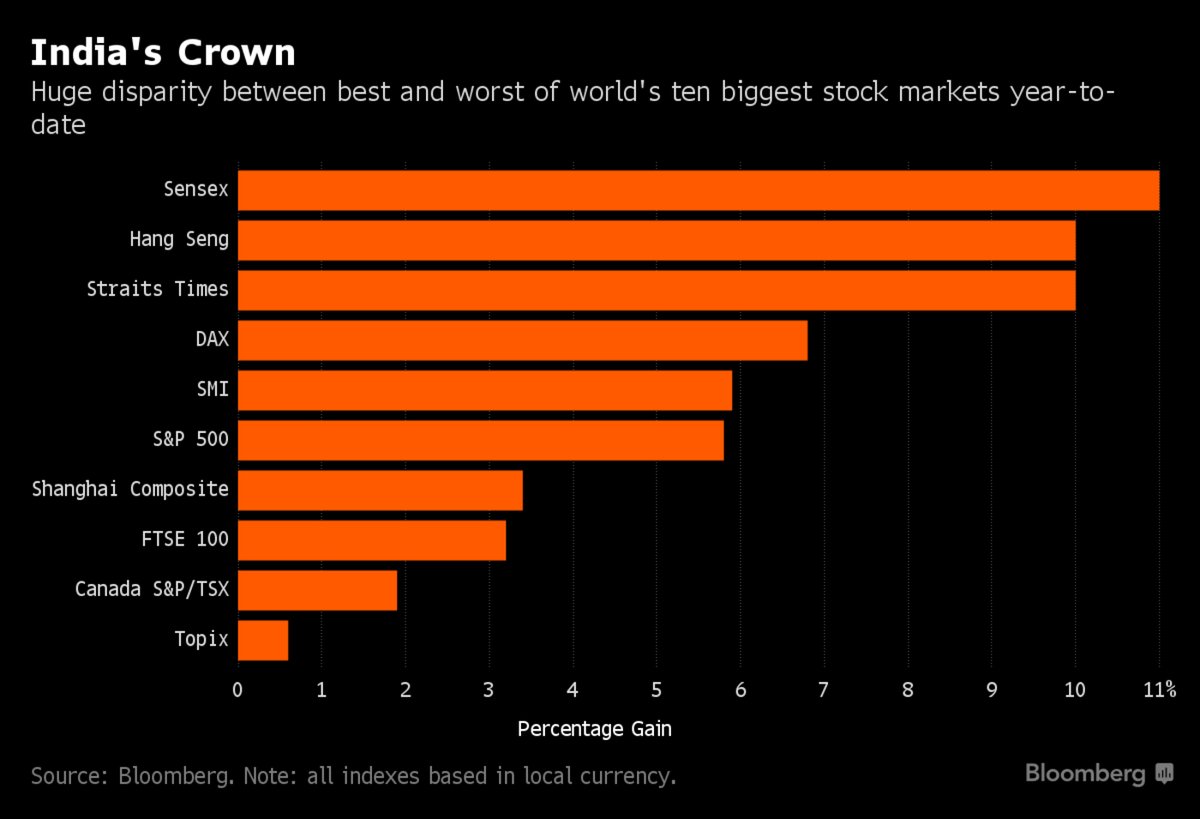 Yes even after the above performance thanks to a story that Raoul Pal said “will blow your mind“.

How important does Raoul Pal consider this achievement?

Everyone knows the enormity of problems in India, crappy infrastructure, corruption, bureaucracy and antiquated institutions. Indians never had any hope of getting what the rest of the developed world took for granted – a nationwide wired phone network that allowed all Indians to connect with each other.

Then came something that eliminated the need for a massive investment in a wired network grid – cell phones, reasonably inexpensive cell phones.That was the first step. India was merely the beneficiary of this American invention.

But the second innovation was all-Indian, something no other nation has even attempted.

Talk about necessity becoming the mother of invention. A majority of Indians did not have any means of identifying themselves. Hundreds of millions of Indians in rural India don’t have a birth certificate and without a birth certificate they couldn’t get any other form of identification. So they couldn’t register for any services, even basic ones like a bank account or a loan. The scale of the problem was so vast that traditional methods could never work.

So India came up with an incredibly ambitious but realistic plan. What makes one person uniquely & totally identifiable? Fingerprints & retina scan.

So India launched a project named Aadhar or support. A project that asked Indians to join a “biometric database based on a 12-digit digital identity, authenticated by finger prints and retina scans“. In the words of Raoul Pal, “Aadhaar became the largest and most successful IT project ever undertaken in the world and, as of 2016, 1.1 billion people (95% of the population) now has a digital proof of identity“.

People could now open a bank account simply with their Aadhar ID. To motivate people to open accounts, the Government “offered free life insurance with them and linked bank accounts to social welfare benefits. Within three years more than 270 million bank accounts were opened and $10bn in deposits flooded in“.

How about combining the Aadhar ID with a cell phone? What is that called?

2. Building out a Mobile Infrastructure

The Aadhar card can be used to instantly open a mobile phone account. As Raoul Pal writes, “mobile phone penetration exploded after Aadhaar and went from 40% of the population to 79% within a few years“.

Now with smart phones, you can integrate secure cameras and Iris authentication partners into an Aadhar-linked mobile phone account. Now you have Aadhar-compliant smart cell phones that can verify identity & bank accounts linked to the Aadhar ID. What does that give you? UPI – A New Transaction System.

That brings us to BHIM, a name every Indian recognizes from the great epic Mahaa-Bhaarat.

The BHIM interface was launched by the Indian Government on December 30, 2016. What is it? As Raoul Pal explains,

Come on, Raoul. Can’t you say it in simple words in one sentence? He could and did – “Payments can now be made without using mobile phones, just using fingerprints and an Aadhaar number” How big is this?

Is that it? Does India plan to rest on these laurels?

How does this benefit the Indian consumer?

5. What does it mean for Indians & Investors?

Add to this the demonetisation initiative of PM Modi and the change in behavior it triggered. What does that mean?

How does Raoul Pal end his article?

PS: Is there a downside to having all your records linked to one ID? Below is a 3-minute clip that explores what might happen to you when you simply want to order a Pizza. You may get another version of Incredible India, an India in which the scariest words are “We are connected to the system, Sir”: