The US stock market demonstrated a single minded focus on the investigation of the Trump campaign. That was the catalyst for the 370 point decline on Wednesday. Then came Deputy AG Rosenstein’s announcement of  a Special Counsel on Wednesday after the close. This was interpreted as a semi-positive or at least a kind of stabilization punt. So stocks rallied on Thursday morning despite Brazil crashing by 16%. This rally accelerated after an earlier clip surfaced of ex-FBI Director Comey saying he had not seen any obstruction of a FBI inquiry in his career. The rally continued with even more vigor on Friday until about 3 pm when news broke of a close senior adviser of President Trump being named “a person of interest”.

As we see it, nothing matters to the US stock market at this stage except the perception of risk to President Trump in this investigation. That is beyond analysis. So we won’t bother too much with opinions about US Stocks. Except to note that the US indices closed down 40-60 bps on the week while TLT rallied up 1.8%, Gold rallied 2.2%, Silver up 2.6% & Dollar down 2% against the Yen & Euro.

That brings us to Treasuries & US interest rates. Even simple folks like us get that this political uncertainty is going to postpone capex & create more headwinds for consumer & business spending. So technical analysis might help in gauging how far US interest rates might go? On Wednesday, Rick Santelli used his whiteboard to lay out the possibility of a 1.8%-2% range for the 10-year yield. But the 10-year yield did bounce from touching the 2.20-2.21% range to close at 2.23% on Friday. 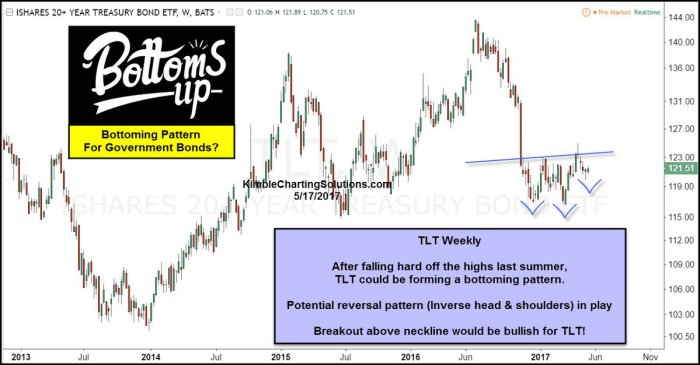 What does a regular H&S formation suggest?

What happened to the US Dollar this week? 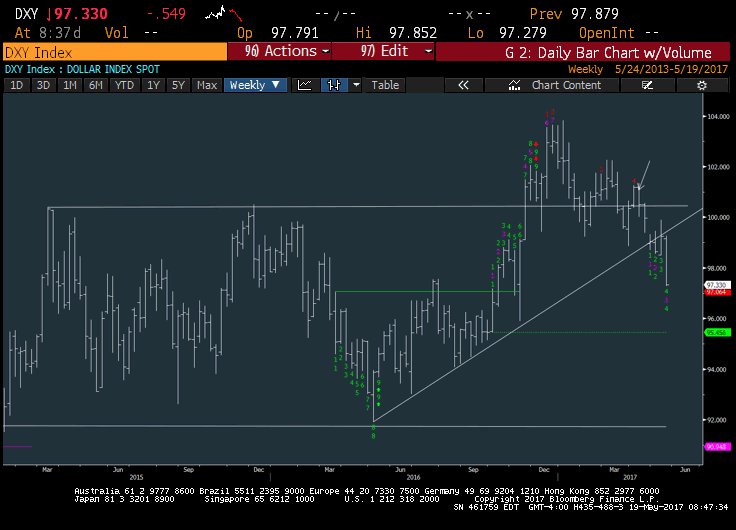 What about sentiment about the $?

So who is right? Newton or Duke? That depends on perception of Trump i-risk on Monday. And on that may depend the action in Gold.
Send your feedback to editor@macroviewpoints.com Or @Macroviewpoints on Twitter