1.Front running after all

Last week we wondered whether the rally into the close on Friday, May 5 was a real move or simply front running an expected rally on Monday, May 8. Now we know that it was not merely front running but front running of a rally that never really materialized. Not only did the S&P 500 close down some 30 bps this past week but EWQ, the France ETF, closed the week down 1.7%. So much for celebrating the Macron victory.

What happened to the Fed reassurance on March 3 and the strong NFP on March 5? Why did the US 10-year yield turned lower from the 2.40% – 2.42% level reached on Wednesday & Friday? Is the Treasury market beginning to wonder if the skeptics like David Rosenberg are correct? Read what Rosie wrote on Friday:

This is the environment in which “Fed hawks are coming out of the woodwork with increasing frequency … “, as he put it? 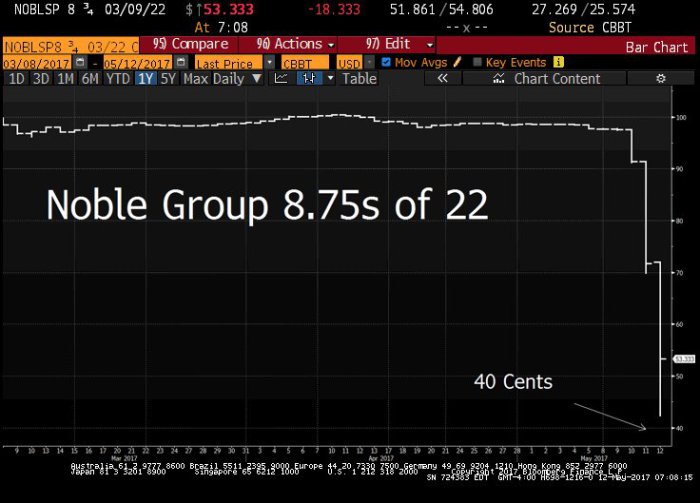 The most interesting call of the week came from Jeffrey Gundlach who recommended a pair trade – Long EEM vs. Short SPY at the Sohn Conference on Monday.

The EEM-SPY trade began working right away with EEM up 2.4% & SPY down 33 bps on the week. However, as we understood him, Gundlach is arguing for a long term or at least an intermediate term outperformance of EM over S&P 500.

Seeking Alpha reported that  “Assets under management in emerging market hedge funds rose another 5.6% in April, according to Hedge Fund Research, with India and China standing out“.

And equities are still in an uptrend, reminds J.C. Parets: 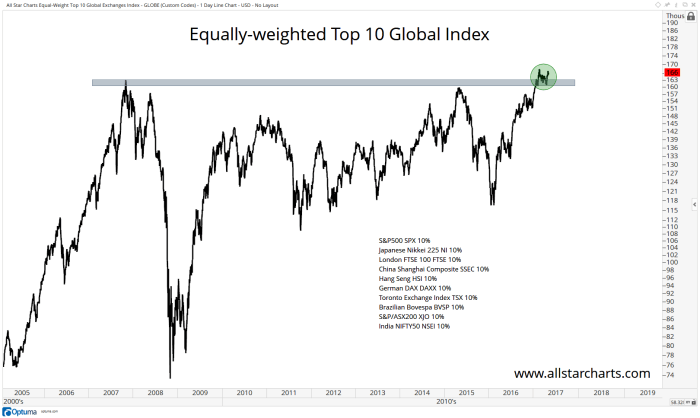 But some see a warning sign in EM sentiment: 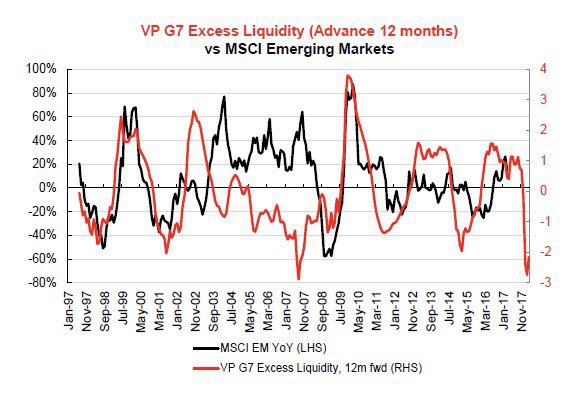 On the other hand, sentiment is pretty extended in the S&P as well; 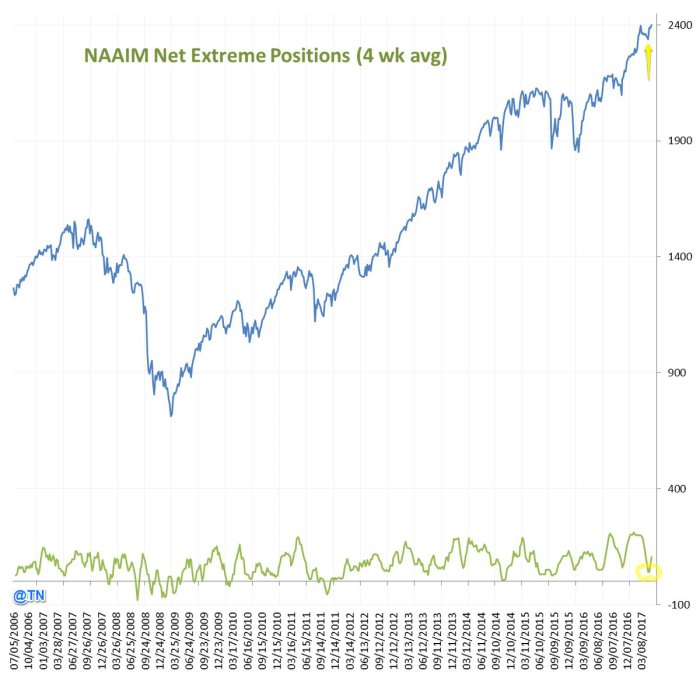 Chinese stock ETFs closed up this week but with a lower trajectory than the China 10-year yield. 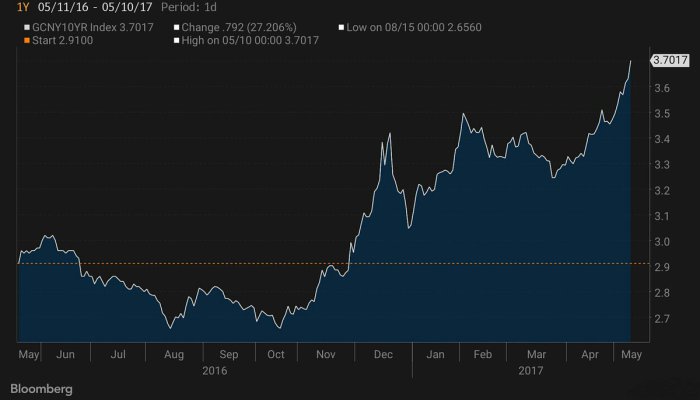 Despite this move in the 10-year yield, the Chinese yield curve inverted this week: 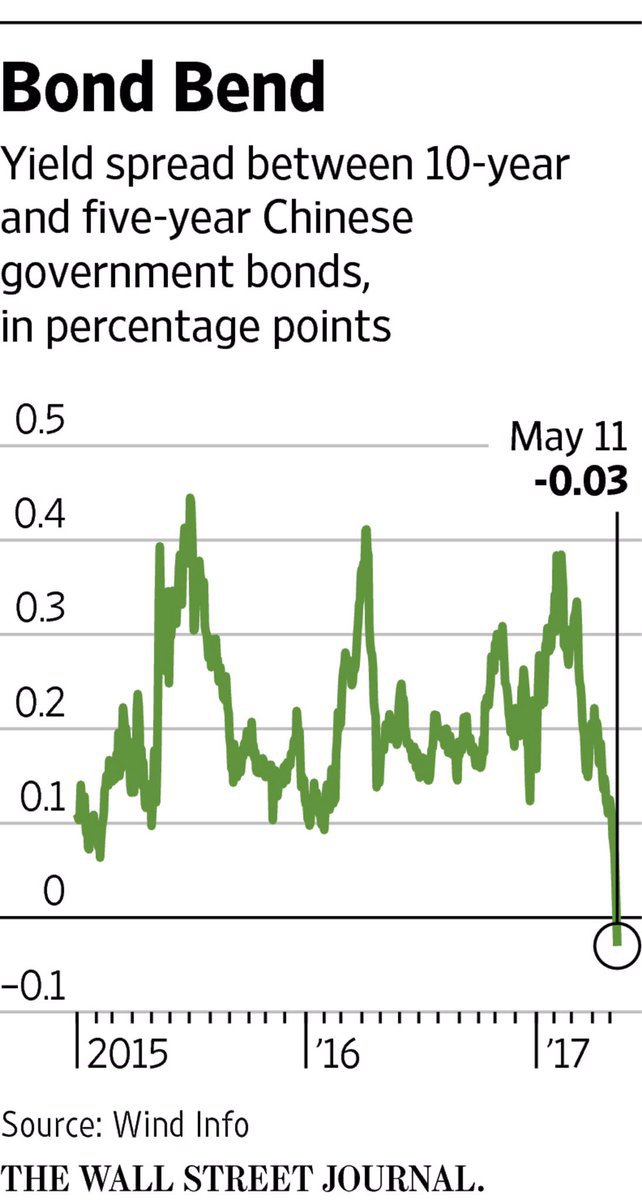 We don’t have direct experience with Chinese macro and can’t say for sure whether an inverted yield curve serves as the same warning in China an inverted yield does in America. But it sure doesn’t sound like a major positive.

Our direct but empirical experience does suggest that fading over loved Indian stock markets works most of the time. 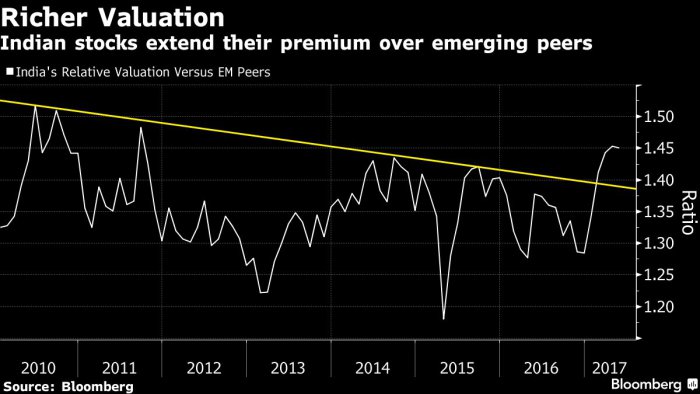 Does it matter who is expressing love? We ask because Bloomberg reported “Locals driving Indian Stock Market as Foreigners’ Influence ebbs”.

To throw in our own 2 cents, the Indian public is highly momentum driven and tends to chase performance. So this gusher of love from the Indian public tends to make us fade the rally. That, of course, is only for short term allocations. As we have said on numerous occasions, we intend to hold our long term holdings for another 10-15 years. Why? Because the long term trend of Indian GDP will take it above German GDP to become the 4th largest in another 15 years or so.

Jeffrey Saut of Raymond James wrote on Friday that his models suggest a bottom mid next week. On the other hand, Lawrence McMillan of Option Strategist remains neutral:

Concern was expressed this week about the low level of volatility & the calm placid nature of the market. But what follows such a period? 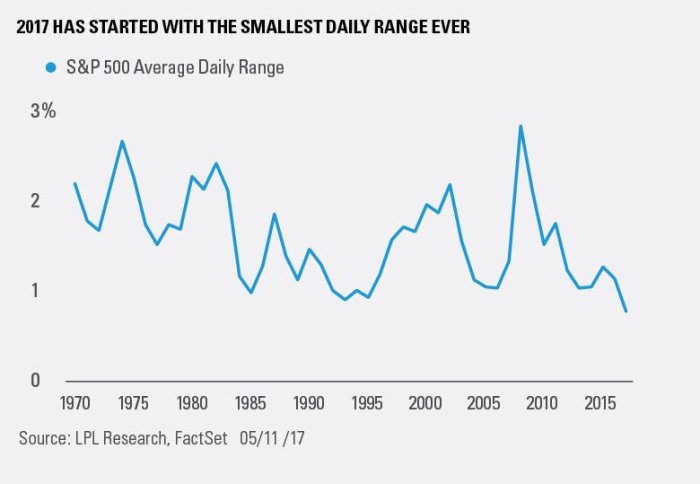 That seems to fit with the next week bottom call by Jeffrey Saut. But what about those who will sell in May and go away? How much of a decline would they be protecting? 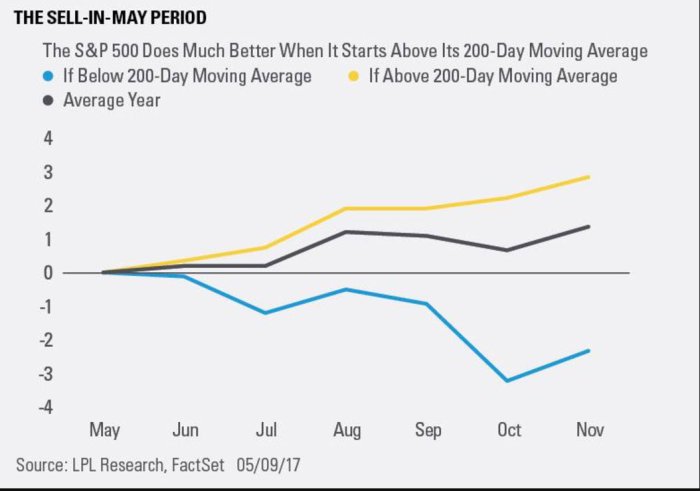 With such data, why sell in May & go away? Or why sell at all? And you have some one as astute as Mark Cuban say Amazon, Netflix & Google are undervalued, so undervalued that he has sold puts in Amazon.

With all the bullish or semi-bullish opinions above, wouldn’t be ironic if we see a decline next week?

Last week, Carter Worth of CNBC Options Action said Buy Silver. That precious metal did rally by about 50 bps this week. That was about 50 bps higher than Gold which closed flat on the week. But Gold Miners were up big with GDX up 5.3% and GDXJ up 7.4%. Of course this rally seems very minor compared to the huge decline of the past several weeks.

But one saw beauty in the ugliness of the GDXJ decline. Kimble Charting pointed out –  “GDXJ has fallen nearly 25% over the past 90-days. When GDXJ has been down this hard in a 90-day window, in during a bear market, it was closer to a short-term low than a high” 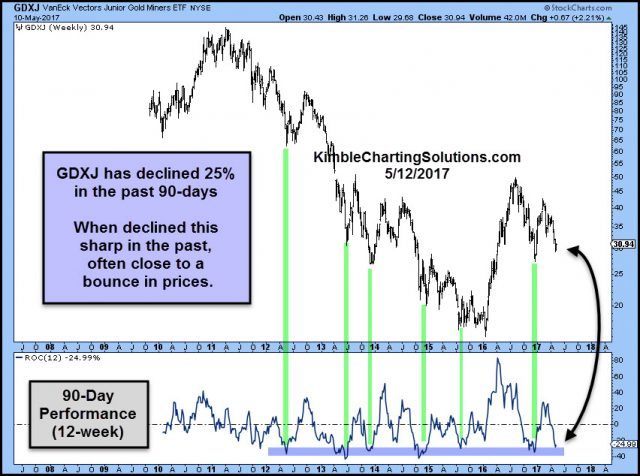 But is the GDXJ/GDX ratio suggesting the same? 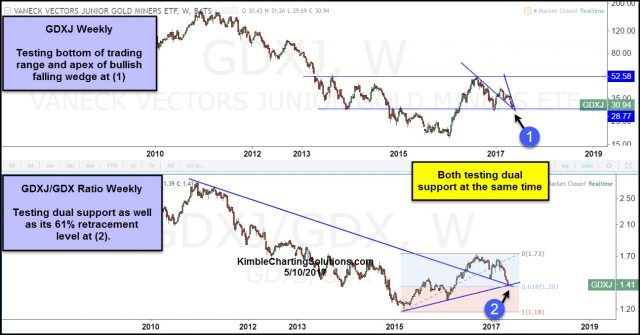 Back in mid-April, Carter Worth, resident technician at CNBC Options Action, called Oil a trap and recommended staying away. What about now? On Friday, Carter Worth was as bearish as in mid-April and said Oil & Oil stocks will continue to underperform the S&P. He also stated flatly “ there is no alpha in oil“.

The incredible run of Baahubali the Conclusion continued this week with the film grossing 12 billion Rupees so far, a figure hardly any one would have imagined. This is a 100% Indian film with 100% Indian content.

We happened to watch Baahubali 1 this week and found one sequences that might have been inspired by a Hollywood film.

Which is better or more pleasing, the Hollywood original or the Bollywood version? Watch & decide for yourselves:

The mask of the woman warrior had fallen down the enormous waterfall. The young man who lived at the base of the mountain gets the mask and climbs up the huge waterfall to discover the face behind the mask. The woman thinks he is a spy come into their camp and tries to capture or kill him. Then the duel above and the happy end once she finds he did climb up the mountain through the huge waterfall to return her mask.