The title, a well known dictum in technical analysis, is used to measure the breakout of an entity from its long term range. After a massive fall from its high, an entity tends to consolidate for some time; it rises, falls, rises again & falls again. You can see this in a chart by drawing a rectangular box with the top horizontal line across the intermediate peaks & the lower line across the intermediate bottoms. This box becomes the base and the actions of rising & falling within the base is called consolidation. Such consolidation tends to build energy & get rid of long term malaise gripping the entity.

Many entities remain trapped in the box and never build the energy to break out. Just look at Egypt, Greece & Rome. But if an entity builds enough energy & inner power during its ups & downs within the base, it can break out of the base or the box in which it was. This is called a breakout.

Indian society was the strongest, richest in the world for literally 3,000 years. In 1,000 CE, the Indian GDP was about 38% of the world’s GDP, similar to the stature America achieved in 1940s after World War II. During its long dominance, Indian society defeated & vanquished the greatest conquerors Eurasia had produced – from a devastating defeat of Alexander & his army to the destruction of invading Huns who had risen from Eurasia to destroy much of Europe, to wipeout of Muslim armies that came out post-Mohammed to conquer Persia & near by Europe. Indian armies were dominant because of Indian metallurgy. Apparently no breastplate in the rest of the world could withstand an arrow fired from an Indian long bow.

Delhi still proudly showcases an iron pillar that has stood out in the open since 376 CE without the slightest evidence of rust or other weather damage. According to the British scientist statements, that technology did not reach Europe till 17th century CE. Study of Sanskrut texts has conclusively demonstrated that Indian mathematicians, astronomers had discovered what Copernicus & Galileo did centuries before them. The Tang dynasty in China had launched a massive project in 6th century to translate Sanskrut texts into Chinese. The Arabs translated Sanskrut texts in Arabic which were then translated & studied in Europe several centuries later.

Indian commerce was just as dominant in that long era. Roman senators used to rail against the massive amounts to gold they had to send to India to buy Indian products. Roman coins have been found in various places on India’s western coast to provide local evidence of India-Rome trade. India’s Sanskrut literature reached unparalleled heights with a long & illustrious tradition of great poets, writers & novelists from Kaalidaas to Bhavbhuti, Bhartruhari to Dandin, RajSekhar, Baan just to name a few.

For some reason Indian Society turned inwards around 900 CE & lost its aggressive expansionary edge. Over the next 100 years, the central role & dominance of Sanskrut dissipated and local languages became more important. The natural result was erosion of federal authority and dissipation of power into regional hands. By 998 CE, Indian society was very different, soft & unfocused.

That began a huge long term fall into near destruction. Defeated, occupied & plundered by waves of foreign conquests first from Central Asia & then from Europe, India’s share of World GDP fell from 38% in 1,000 CE to 0.5% in 1947. There were spectacular regenerations during these long periods, the most notable being the one from 1650 to 1800. the heart of which was the re-conquest of Muslim-governed North India from 1720 to 1760.

This breakout failed miserably in the first decade of 19th century for many of the same reasons that led to India’s fall from 1,000 onwards. Then India became independent of the British in 1947 but it remained a pathetic India run by former Brit-enamoured Indians who demonstrated no strength or drive. But energy of Indian society was being regenerated for a breakout.

The first evidence of Indian Society’s breakout was the electoral wave that brought Narendra Modi to power in May 2014. This was not just an election but as we wrote on April 18, 2014, a month before the election, :

How does Indian society regain mental independence? By going back to India’s core, going back to true, real India untainted from the colonial influences of the past 1.000 years. This may sound nuts or impossible to people who trace their own breakout to European Renaissance of 13th & 14th centuries. But it is easy & natural for Indian society. All Indians needed was a mental breakout.

That the breakout is happening & that India has began the journey towards “mental independence” is best viewed from the lens of Indian cinema. Just a year after Narendra Modi’s huge victory in May 2014, came the breakout film Baahubali, the Beginning. The ethos of the film was pure India, the India that has always gone back to Shiva-Shankar, the Lord of the dispossessed. Every Indian military resurgence has been led by an invocation of Shiva. Naturally, the central character of this Grand Magnificent Film was named Shivdu.

Within months of Baahubali the Beginning, came Bajirao Mastaani, an opulent spectacular film. The film openly celebrated the resurgence of Indian spirit of conquest and its defeat of alien Muslim rule in North India. The sheer audacity of its message might not have been possible in the early decades of Indian independence. But by December 2015, an year & half after India’s mental independence election, Indian society was ready and openly embraced this film. 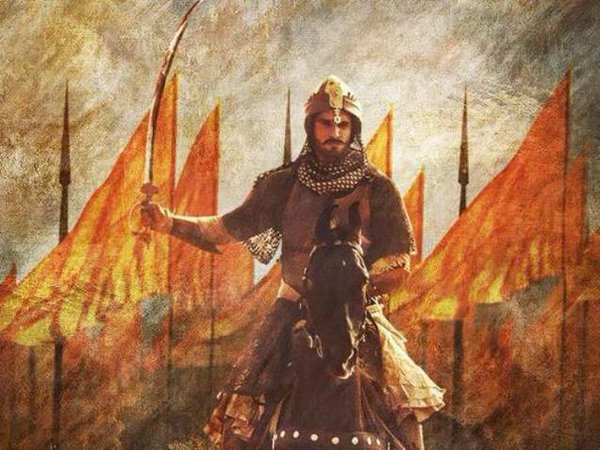 But Bajirao Mastaani was not truly Indian. How could it be? Bollywood is a titular Indian entity. Its dominant culture is Iranian Muslim and every production of Bollywood drinks deeply from this alien Iranian cultural domination.

Our wait was over on April 28 with the release of Baahubali, the Conclusion. Frankly, we were a bit nervous & unsure whether this eagerly expected film would surpass what the first Baahubali film had achieved. Stupid, right?

On a personal & elementary level, Baahubali 2 met the deep need from our childhood for an Indian film like Ben Hur or The Ten Commandments. Actually, Baahubali 2 blows away these great films both with its story telling, its performances & its sheer magnificence both of vision & visual realization. And,

Yes, Baahubali2 is purely Indian. No trace of any vestiges of any colonial influences in the film. As you watch the film, it brings to you immortal moments of Indian history & literary tradition. Bollywood could never have made this film with Bollywood’s inner obeisance to Iranian Muslim culture.

When have we ever heard of a standing ovation for a film half way through at intermission?

Yes, Baahubali2 has redefined the grandeur & scale of what an epic film is. Without the slightest exaggerration we can say that all epic films will now be classified as pre-Baahubali2 & post-Baahubali2

India & Indians everywhere have embraced Baahubali2 as never before. As we write, the first week’s collection has reportedly been 10 billion Rupees, an unimagined figure. Karan Johar, the celebrated & iconic producer-director of many Bollywood blockbusters, termed Baahubali2 as a “Cinema Revolution” and a “storm” that is going through the movie industry. 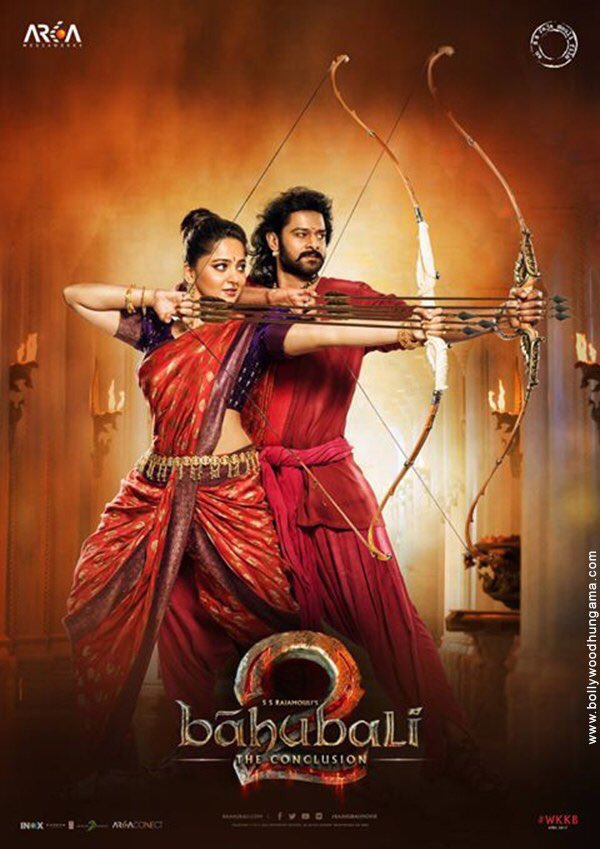 But Baahubali2 is NOT merely for the Indian as Rajiv Sinha said in his tweet above. It is a film for the entire world to watch, enjoy & marvel. It has already achieved great success internationally. Just take a look at per screen collections from its opening weekend in America.

Not only did Baahubali2 rank 3rd in America in its opening weekend, but, as the New York Times wrote, Baahubali’s revenues came from 428 screens in contrast to 1128 screens for the number two hit. And the US winner, the Fate of the Furious, played in 4,007 screens almost 10 times the number of screens for Baahubali2. In UAE, Baahubali was number 1 eclipsing the Fast & Furious film that ranked first in America. And, according to the Economic Times, there are now plans to release Chinese & Japanese versions.

3. A Breakout of Indian Society

It is not a coincidence that the enormous embrace of Baahubali2 by Indian society came within two months of Narendra Modi’s sweep of the election in Uttar Pradesh, India’s largest state & central core. It is not a coincidence either that Indian society has accepted & embraced Prime Minister Modi’s selection of Yogi Adityanath as the Chief Minister of Uttar Pradesh. All of this demonstrates to us that Indian Society’s breakout from its colonial Muslim & British past is real.

And the breakout has not been limited to literature & films. India is already the fastest growing economy in the world and the Indian stock market was the best performing major market in Q1 2017 with a 17% gain.

This is just the first step of India’s breakout. A lot needs to be accomplished before the breakout is judged as long term. Until that is demonstrated & seen, the question mark will remain after “Longer the base, Higher in Space“.

But the signs are promising and no sign more glorious than Baahubali the Conclusion. If you don’t go & watch this film, you would miss something amazing.