Among all the sturm & drang of this week’s Trump-Comey episode, the central point was postulated by Ian Bremmer of Eurasia Group on Thursday:

We totally concur with the first two sentences in Bremmer’s tweet. But Bremmer could end up being wrong about his third sentence above. So we sent him a quick response:

The central question is who ends up being correct? Bremmer or us? Politics is a deadly combat sport. And the only thing that counts is who wins at the end. Normally one can bet using polls. But, as Ian Bremmer himself said, they don’t matter much right now: 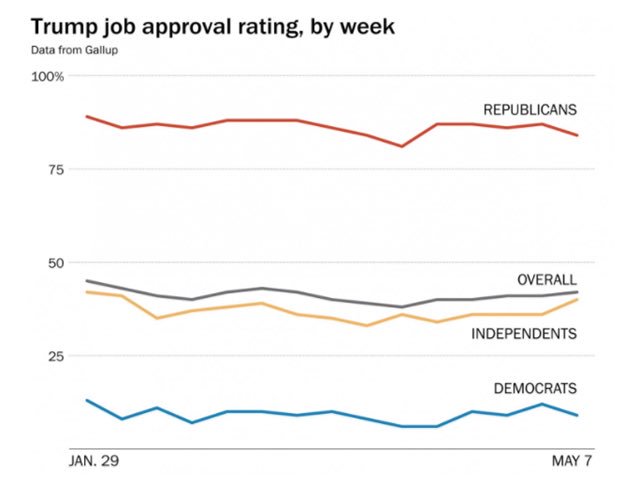 What constitutes a win in this case? Whether President Trump ends up a winner by passing much of his agenda & how he fares in the November 2018 mid term elections? We think President Trump will win this fight. Below we lay out our reasoning.

President Trump has the unique ability of utterly enraging his opponents. Just look back at this past week’s clips on CNN, NBC, MSNBC, ABC et al. All these guys were so full of discombobulated rage that they became almost funny. Whether it was Chris Mathews of MSNBC going nuts or Anderson Cooper of CNN rolling his eyes on air, these yahoos lost all their balance.

They forgot the first & most important rule of fighting – “fight with your head, forget the heart“:

Set in the years prior to the French Revolution, master teacher Perigore admonishes  Andre Moreau – “you have a demon in you this fine day; lose it or you will not live to see another”.

In the 1962 classic El Dorado, gunfighter Cole Thornton (John Wayne) says about his opponent Nels McCloud – “a fellow in his business has no business being mad; so the more mad he gets, the more I like it“.

Whether it is fencing in France, gun fighting in the old west or political combat played on national TV, the rule is very clear – leave anger & passion outside and fight with a cold head. When you forget this dictum, you lose big time as Senate Minority leader did by first praising Deputy AG Rosenstein in the morning and then refusing in the afternoon to accept any candidate Rosenstein chooses.

But political combat for & against a President is not a one fencing duel, one gun fight or any one event. Like war, it is a campaign over many months. The dictum of these campaigns is to drain the opposing army by strategic or tactical mobility – by getting them to attack an unimportant target after another while your army remains elsewhere. No army can keep this up for several months without exhausting itself. Then at the right time, your army can catch them at a place & time of your choosing and score a major victory.

Think ahead to early next year. The Russia-Election investigation should be completed by then. If President Trump is vindicated personally as we (& Ian Bremmer) think he will be, he will be in a very strong position. He can make a forceful case that he & his administration have remained focused on doing the people’s business – getting conservative judges in Supreme & Federal Courts, getting the Health Care bill passed, getting Tax cuts for the American people and negotiating trade deals. He can heap blame on Democrats for totally ignoring people’s business & concentrating on false personal attacks as an excuse to not work with President Trump.

By that time, it would be obvious to voters that the clamor about Russia was a Quixotic exercise in futility driven by personal hate of President Trump. Which Democrat wants to go to voters with that track record?

President Trump would have a strong moral authority to demand such investigations because he will have gone through an investigation against his campaign and come out innocent. And that could be Q1 2018 business, just in time for serious campaigning for November 2018.

Look how approving Republicans are despite the insane rage based attacks on him on multiple TV channels. 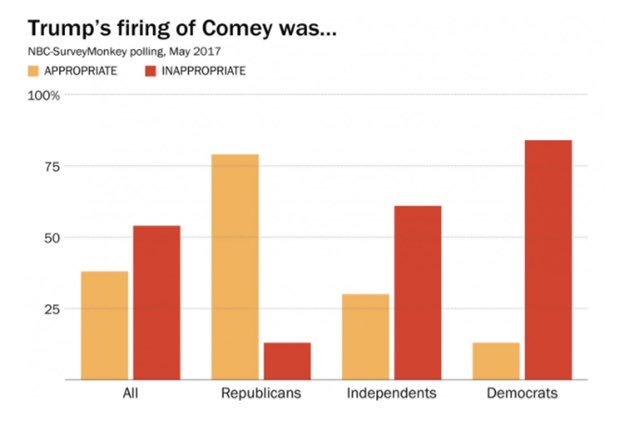 How will these numbers look or how will Independents feel next year after President Trump has been declared innocent of allegations against him and the heat shifts to Clinton Foundation, Hillary Clinton & the tacit support to them by Democrats?

Now do you agree with us that this past week’s attacks will end up being to his benefit?