As Prime Minister Modi sat down for dinner with President Trump three weeks ago, China sent its soldiers in a major incursion into Bhutan’s border with Chumbi Valley, a very strategic area at the intersection of Chinese-occupied Tibet, India & Bhutan. The incursion was to build a road from Chinese-occupied Tibet into the Doklam plateau that would enable Chinese artillery to threaten a critical pathway, known as “Chicken’s Neck”,  from mainland India into Northeastern India. Indian Army troops entered the area and stopped the Chinese Army from building the road. Thus began the standoff that continues to this day.

Such standoffs have been somewhat common between China & India in their long Himalayan border. They last awhile and, after discussions, the two armies withdraw to their pre-standoff positions. But “this time is different“, wrote Jeff Smith, Director at the American Foreign Policy Council, in his detailed article High Noon in the Himalayas on WarOnTheRocks.com.

Another signal that this time is different came from a report from India Today that “the Indian Government has quietly authorized the Indian Army to make emergency purchases … so that the army is ready for a short intense war“. [emphasis ours here & in the rest of this article]

This standoff could well have been the result of a major miscalculation by the Chinese Leadership. That was obvious to most including Ryszard Czarnecki, vice president of the European Parliament, who said “An aggressive China did not anticipate India stepping in a strong manner to defend Bhutan’s territorial sovereignty during its unilateral move to build a motorable road from Dokala in Doklam area towards the Bhutan Army camp in Zornpelri“.

And face is crucial to the Chinese leadership especially ahead of the 19th Party Congress coming up in October-November.

Another & even more important miscalculation by China was in the choice of the area. The Doka La plateau is of enormous strategic consequence to India but only of incremental consequence to China. So India has no choice at all but to defend this plateau from Chinese encroachment. To understand why, look at the bird-eye map from Jeff Smith’s article on Warontherocks.com. 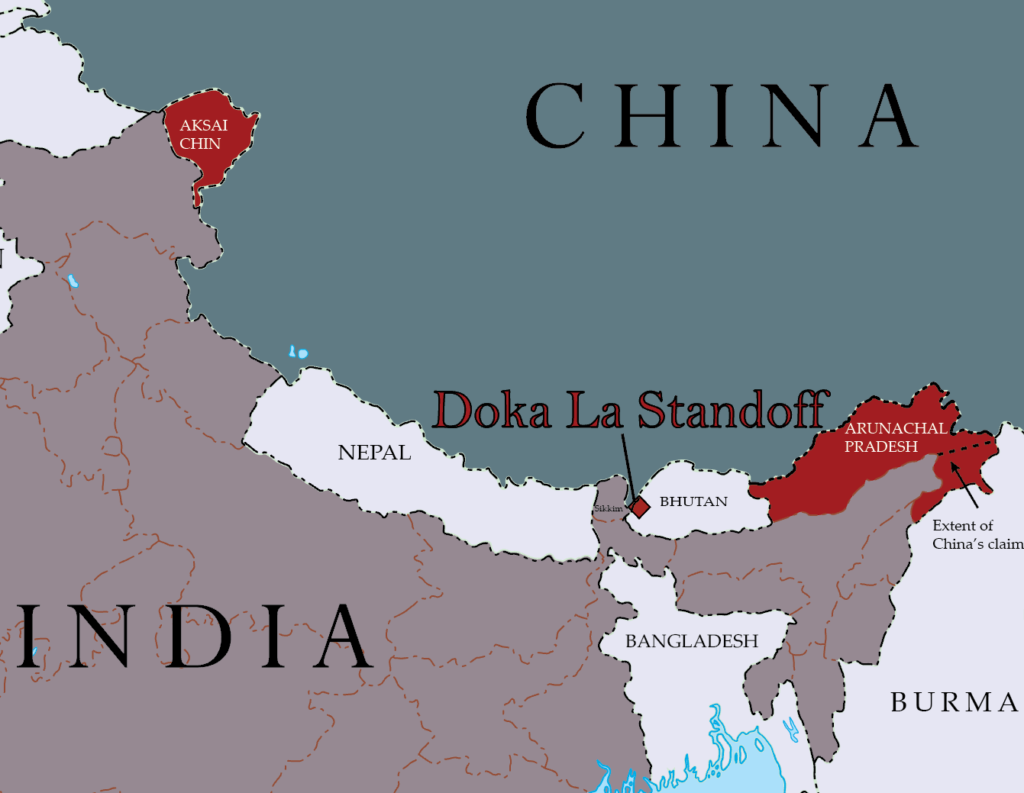 Look at India’s small grey pathway between Nepal & Bangladesh. That is known as the Chicken’s Neck. If this neck is disabled & made unusable by China, the entire northeastern portion of India can be cut off. This is India’s greatest weakness on the long China-India de facto border. Now look at the red square titled Doka La. If the Chinese are able to move their artillery into this Doka La plateau, they can shell the Chicken’s Neck and cut off India’s Northeastern states from Indian mainland. That is the purpose of the road China began building in that plateau. That is why the Indian Army moved in to stop the Chinese incursion.

What makes this interesting is that the Chinese incursion is not into Indian territory but into Bhutanese territory. So the Chinese made a play that seemed smart to them. On the other hand, India is obligated to come to Bhutan’s defense under a Bhutan-India treaty. And the area is of far greater strategic consequence to India than it is to Bhutan. So India had no choice but to intervene to defend Bhutan and of course defend its strategic interests. We just don’t get how China did not expect this Indian response. Perhaps, it was hubris, perhaps contempt of Indian leadership. They might have gotten away with it had India been led by a typical Indian politician and not Narendra Modi.

Much has been written about the Thucydides Trap about the interactions of a rising power with a ruling power in terms of America and China. That would be a global conflict & therefore a more distant possibility.

What has been missed is a smaller, more local, version of the Thucydides trap. Since 1962 China has been the ruling power along the long 3,500 km line of control between China & India. They feel that they have the right of incursion in to the Indian side as they deem necessary from time to time. On the other hand, India has been building up its own military infrastructure along the line of control for the past couple of years.

As Shyam Saran, former Indian Foreign Secretary wrote on July 3, “China believes that India should acknowledge the power disparity between the two sides and show appropriate deference to China.” But, as Shashank Joshi, a Senior Research Fellow in a British institution, wrote this week:

So China may have thought it was time to teach India a lesson just like the lessons China has taught smaller countries in South East Asia and even Japan. It is now clear to them and to the entire world they miscalculated badly. Therein lies the danger. Big countries, especially countries that think of themselves as a “ruling power”, find it difficult to backtrack from their miscalculations. For China to backtrack from India would send a bad signal to ASEAN countries & to America. For India to backtrack would mean acquiescing in future strategic suicide by letting Bhutan slowly become a vassal of China & thus endangering its entire Northeastern portion.

So what began as a small audacious miscalculation is now a major geostrategic standoff with global implications.

While China is indeed the bigger military power across the long line of control, the Chumbi Valley that borders Bhutanese Doka La is the one area where Indian military has advantage. As Shashank Joshi wrote this week,

And, as Jeff Smith quotes veteran defense analyst Nitin Gokhale, “Chinese forces in the narrow Chumbi Valley are currently in the line of sight and fire of Indian forces poised on the ridges along the Sikkim-Tibet border“. 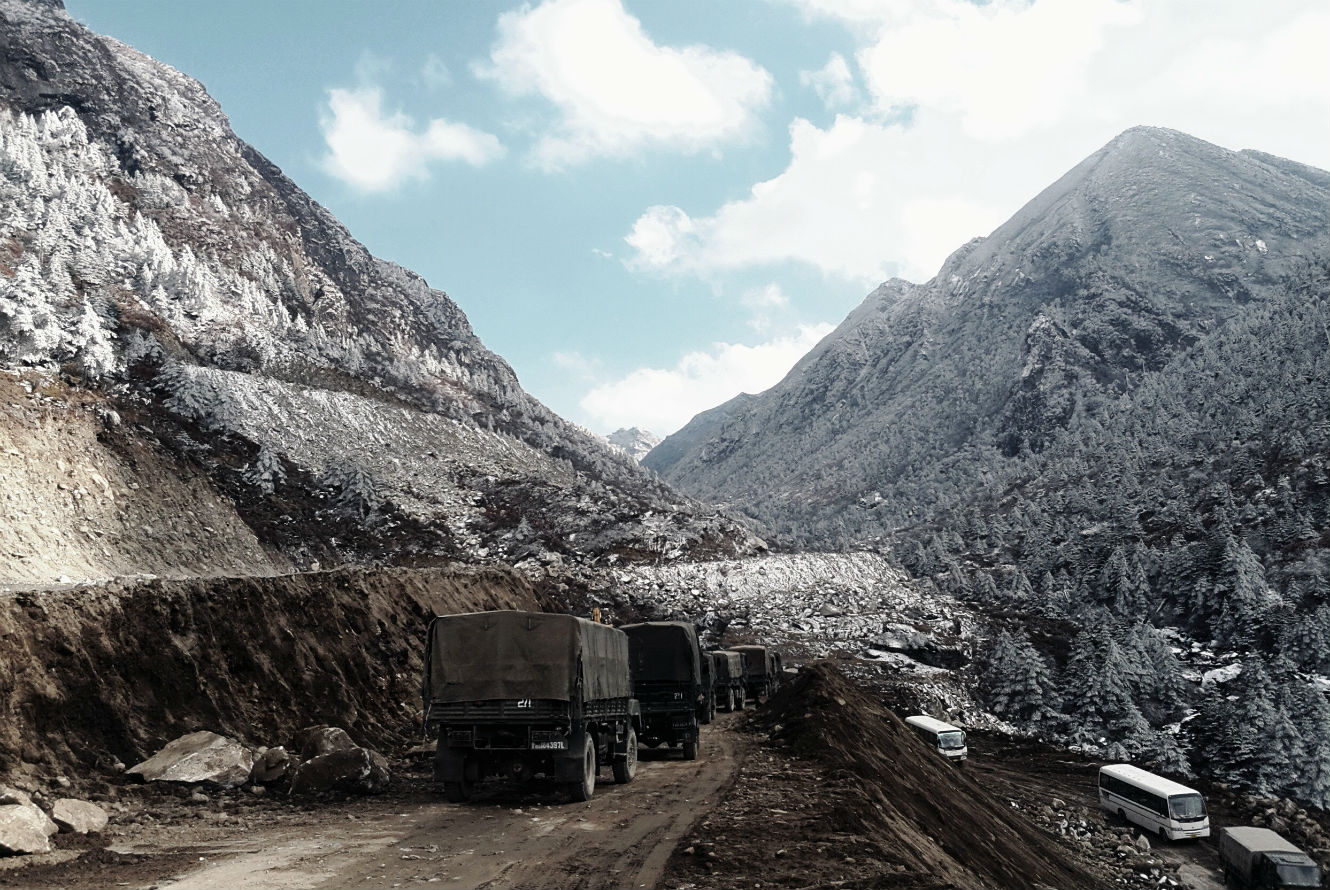 This is important because, as retired Brigadier Arun Bajpai noted this week, “In the mountains, you might have lakhs [1 lakh = 100,000)] of troops, but you can move forward only through narrow mountain passes where the soldiers could become easy targets for men sitting on top of those passes, the position which we currently hold and not China. Out of the 62 Passes throughout the Himalayas, 61 are held by India.”

Bajpai added “India has got approximately 12 mountain divisions fully trained in mountain warfare.” In contrast, the main body of the Chinese army is in bases in Tibet and these divisions would have to be moved to border areas. While China has built up excellent infrastructure to do so, it still takes time to move the forces and to get them acclimatised for high altitude fighting.

So while China is much stronger & much better positioned for a longer war, India may have the advantage in a short intense war.

4. The Big Factor for Chinese Leadership

This might be just the wrong time for China to wage a long conflict with India. Their bigger worry is America deciding to attack North Korea to de-nuke that regime. No one can say with certainty how that conflict would go and what the result might mean for China. That is a far more strategic issue for China than one small area at the intersection of Bhutan, India & Chinese-occupied Tibet.

As the above comments of Vice President of European Parliament show, the world knows that this standoff is the result of China’s aggression. If China escalates this standoff into a conflict, the entire world & especially the smaller Eurasian countries would become much more suspicious of the One Belt One Road project of President Xi Jinping, the defining project of his tenure & legacy.

That brings us to the biggest factor for China in this standoff. The 19th Party Congress is scheduled to meet in October-November 2017. This congress will decide the next generation of leaders of China. There is reportedly a huge tussle going on between former president Jiang Zemin faction and current president Xi Jinping. Then there is the Youth League faction. This congress will elect 5 of 7 standing committee members and so the stakes for Xi Jinping are enormous. He simply cannot be seen as “weak” in this standoff with India in Doka La. On the other hand, coming off second best in a short intense military conflict with India could prove disastrous for him at the congress.

So the sensible course of action would be to continue this standoff until the 19th party congress is concluded in November. The winter will also be on the horizon by then and going back to the earlier lines could be achieved quietly.